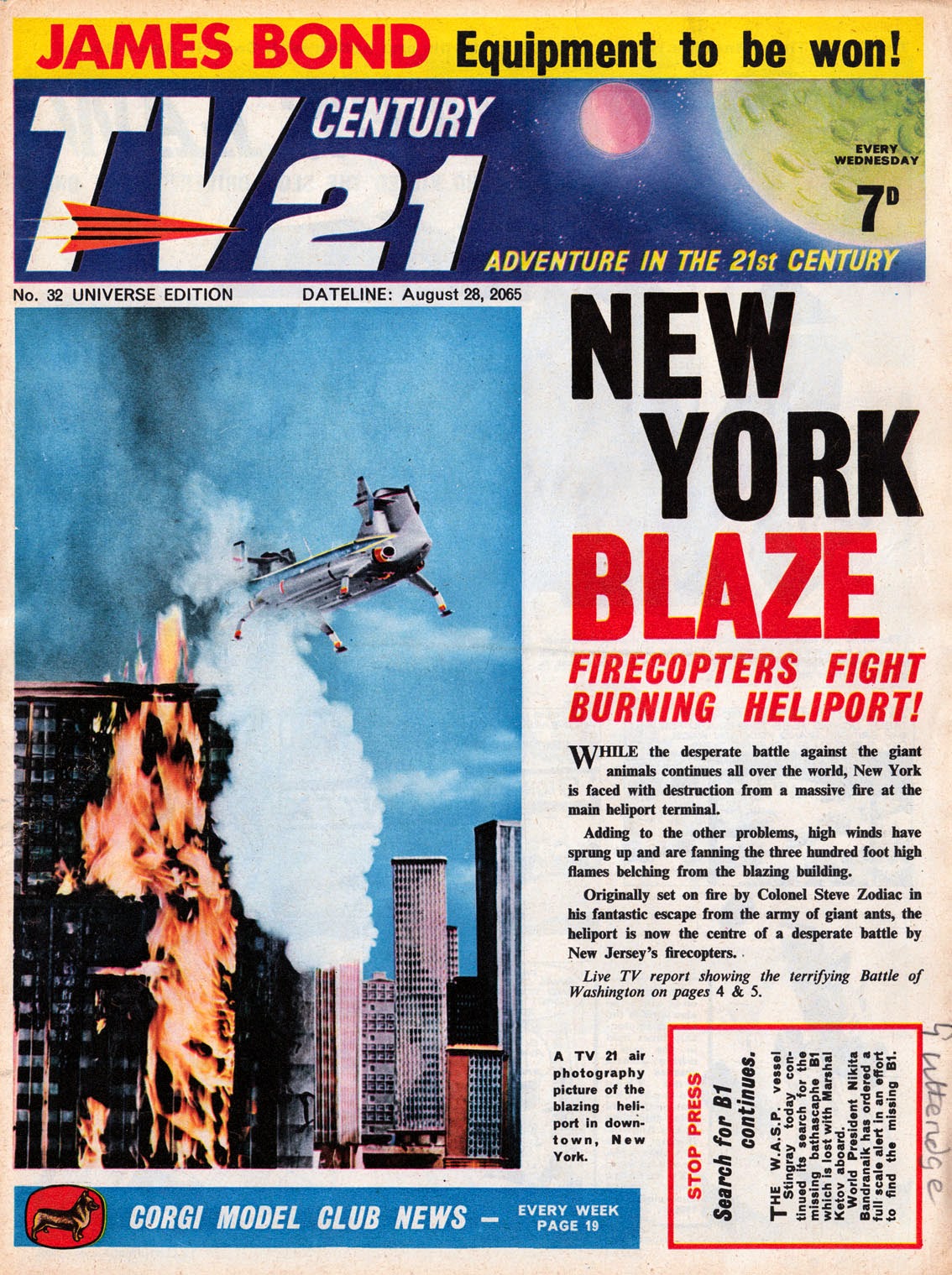 This is the issue of TV21 that was published exactly 49 years ago today, on Wednesday 25th August 1965. I can tell you with certainty that the weather was absolutely throwing it down with rain that day. How? I remember that this issue got soaked on the way back from the shops and we had to dry it out in the bathroom for a few hours. (This isn't the copy I had back then by the way. That's long gone. This is one I bought in the 1980s.)

Perhaps due to that soggy escapade I can remember a lot of scenes from this issue even after all those years. Anyway, let's have a look inside...

As was the case with that first year of TV21, the comic kicked off with two pages of Burke's Law, drawn by Paul Trevillion, based on the US TV series... 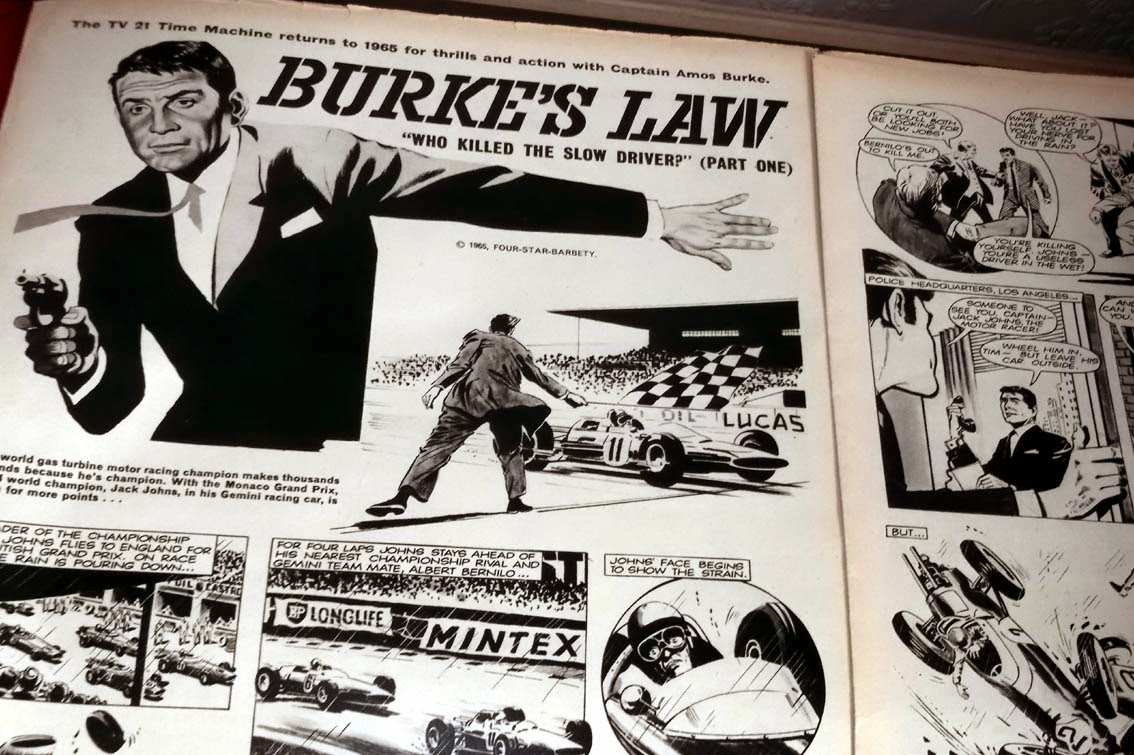 Turn the page and the impact of Mike Noble's superb artwork on Fireball XL5 was a joy to behold. TV21 really knew their audience. When we as young children were watching Gerry Anderson's puppet shows we weren't really noticing that they were wooden marionettes moving awkwardly on strings. In our imaginations this is the sort of impression those shows presented to us, and the strips in TV21 captured that dynamic excitement perfectly. 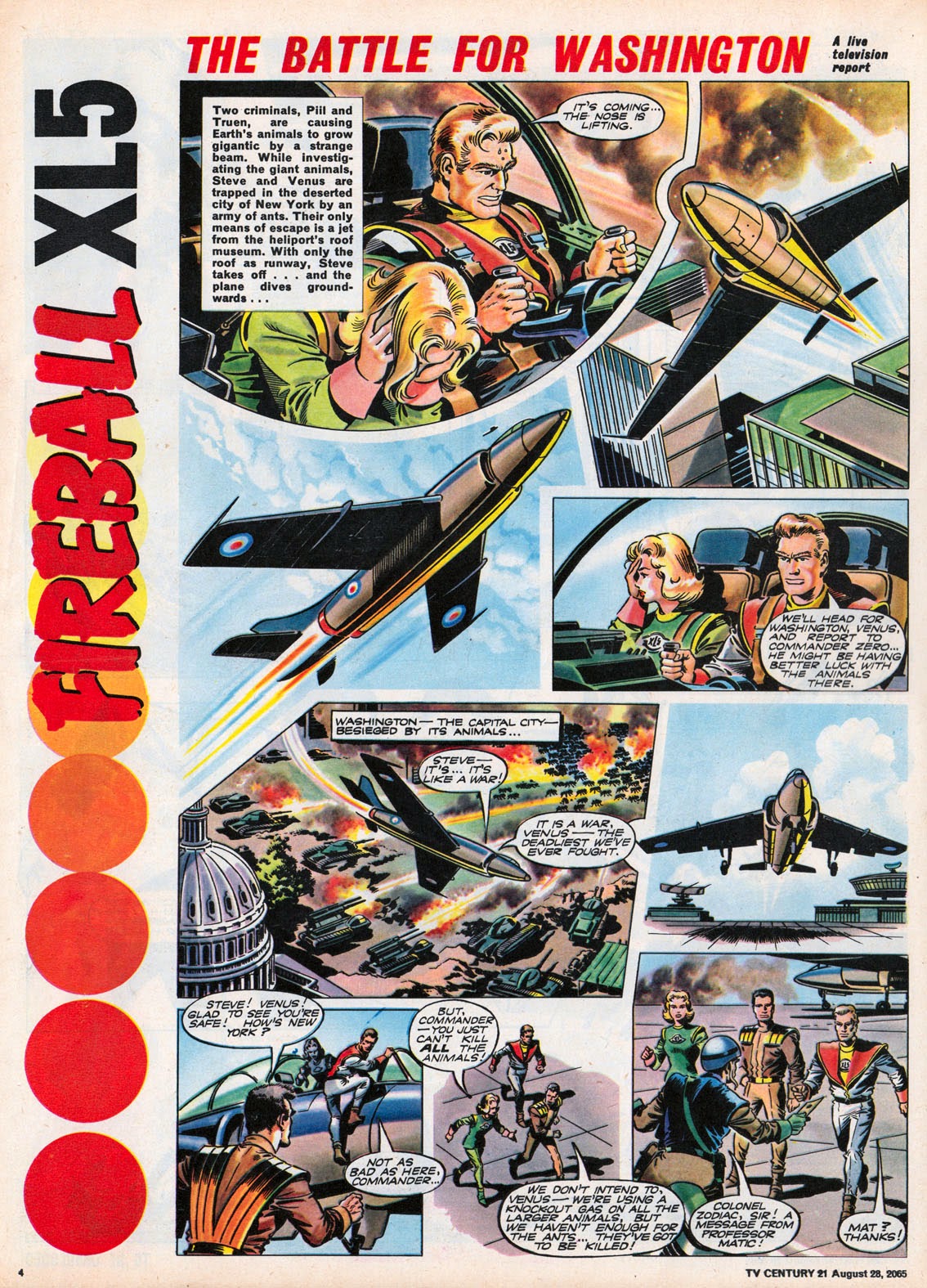 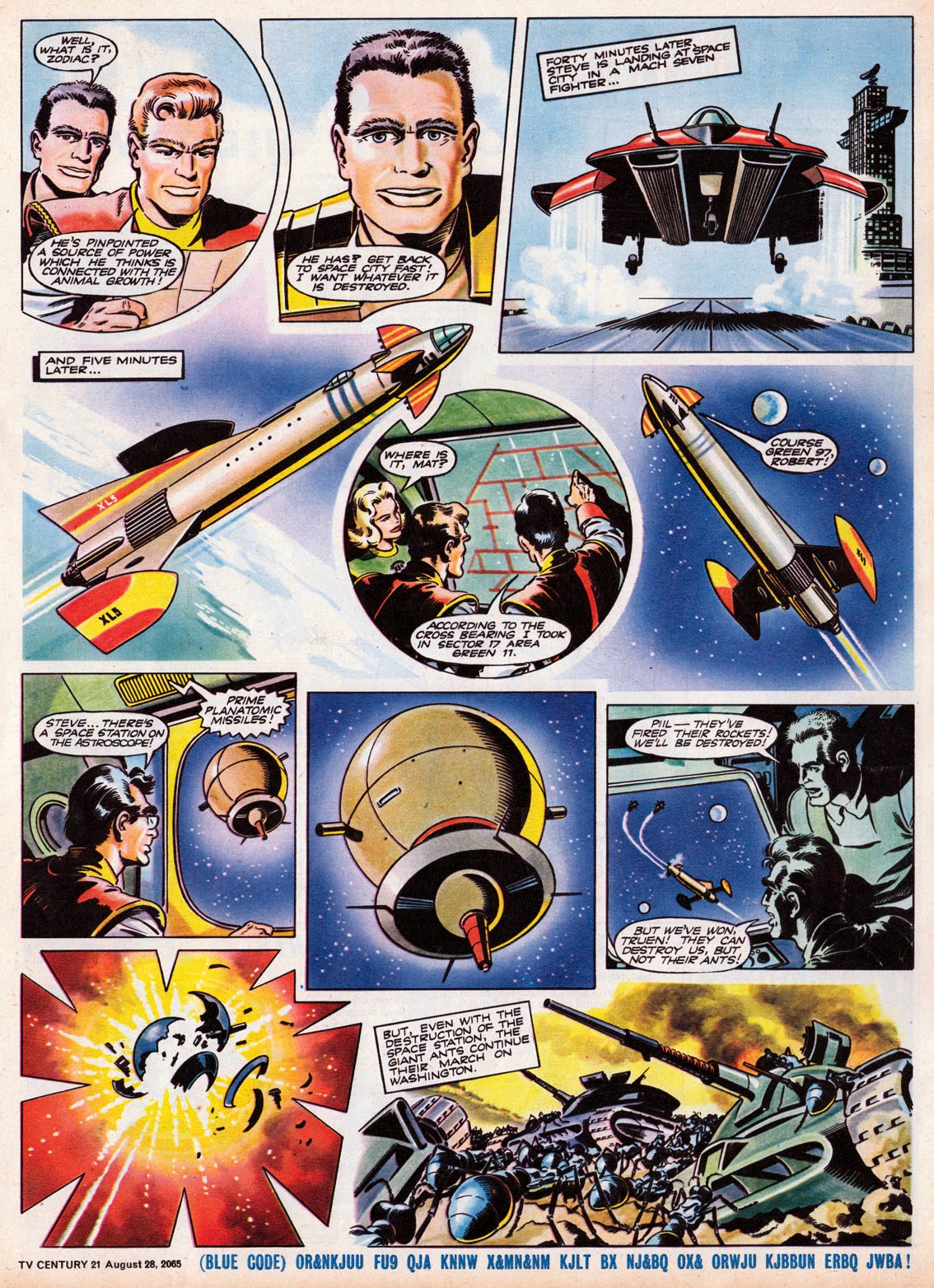 Special Agent 21 on page 7 was an excellent originated strip that not only tapped into the spy fad of the sixties but also tied into the Anderson universe. Art by Rab Hamilton... 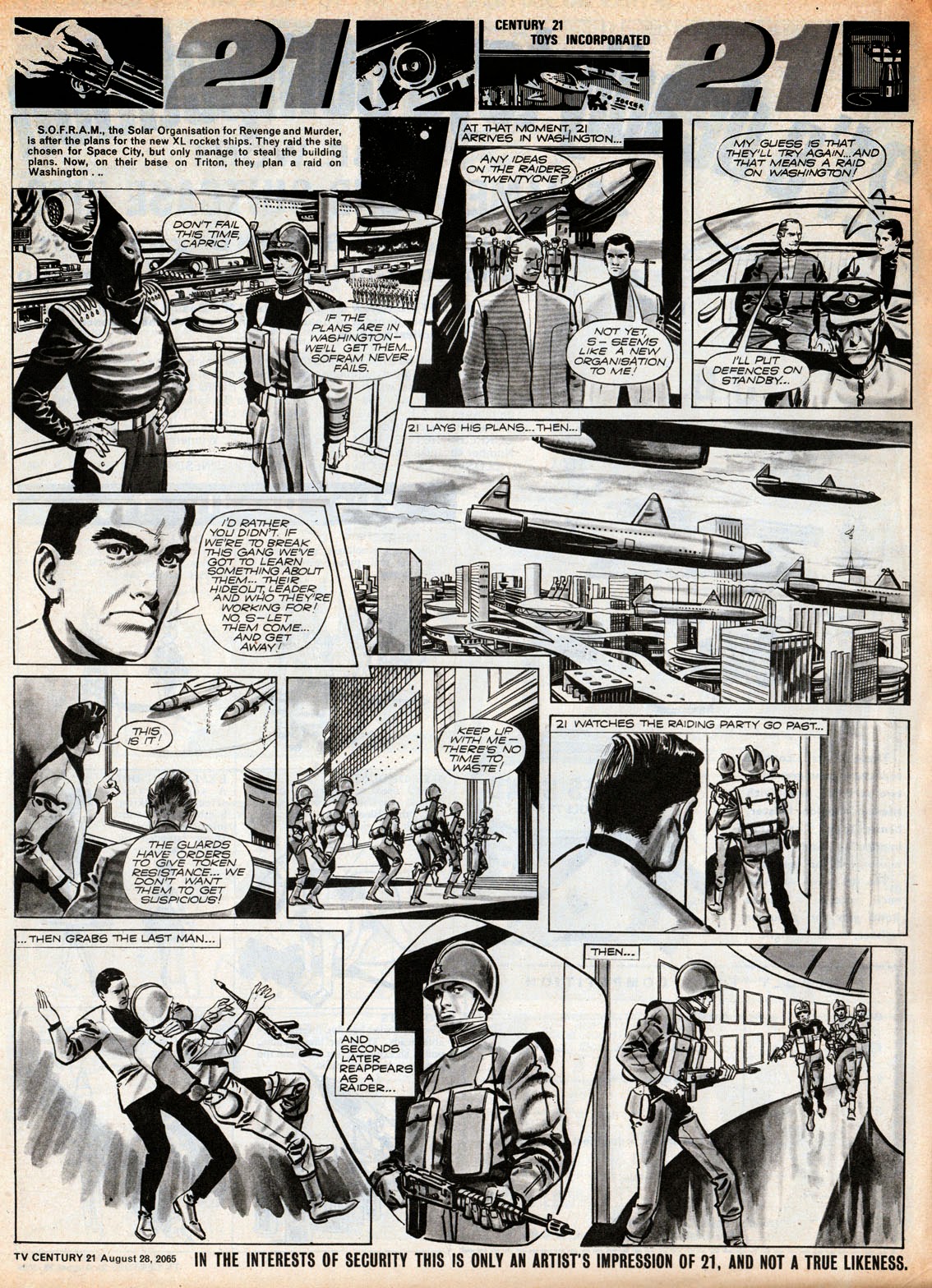 Also reflecting the spy fad was this competition. I had that James Bond cap gun but I don't recall a holster with it. My version came with a plastic 'silencer' to fit onto the end of the metal gun barrel. (As seen in the case set shown.) 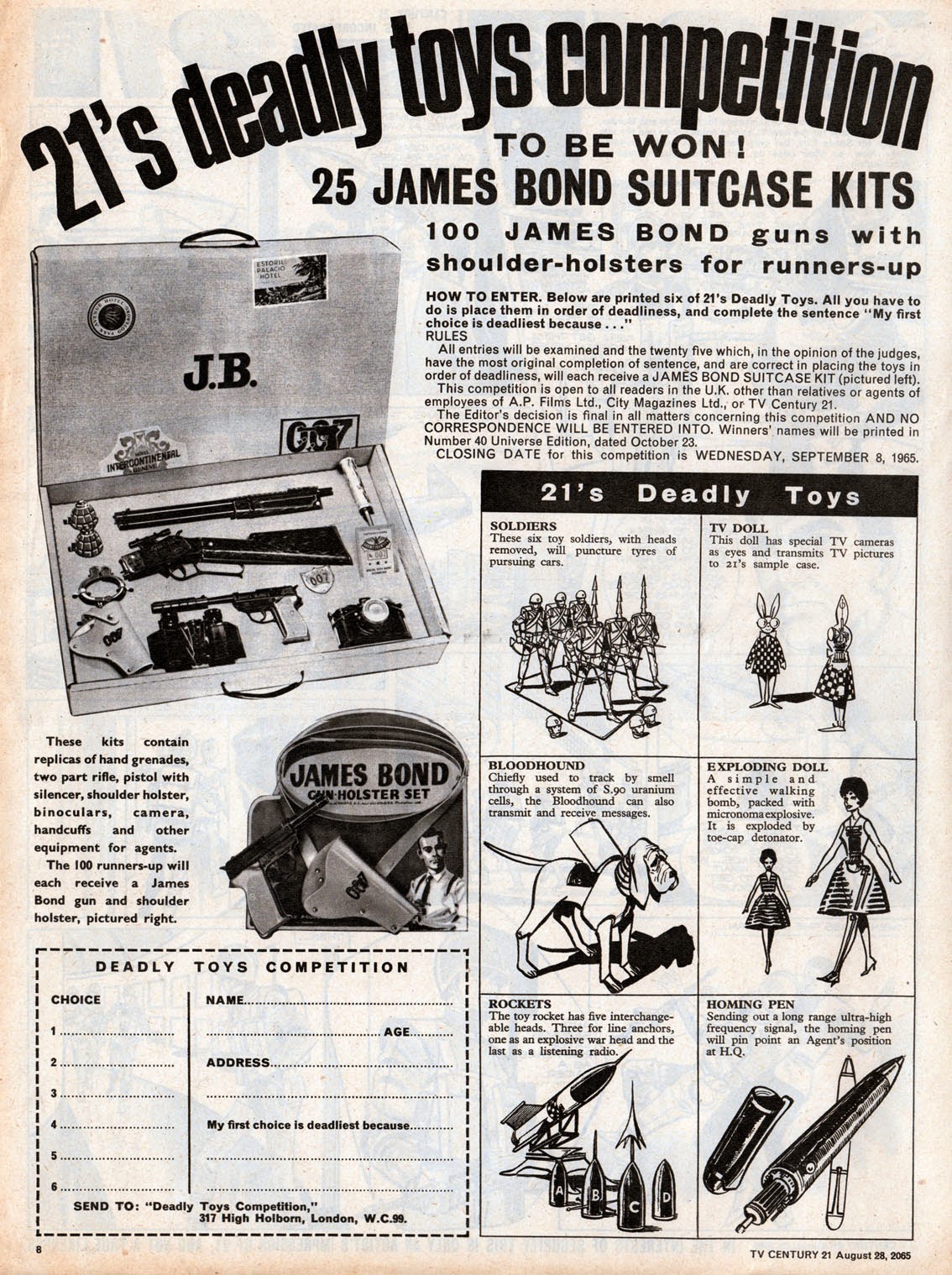 My Favorite Martian was a full page humour strip on page 9, based on the American TV comedy show. I never saw this show at all when I was a kid, so perhaps it was only shown in selected regions or it clashed with something on the other channel. Art by Bill Titcombe. 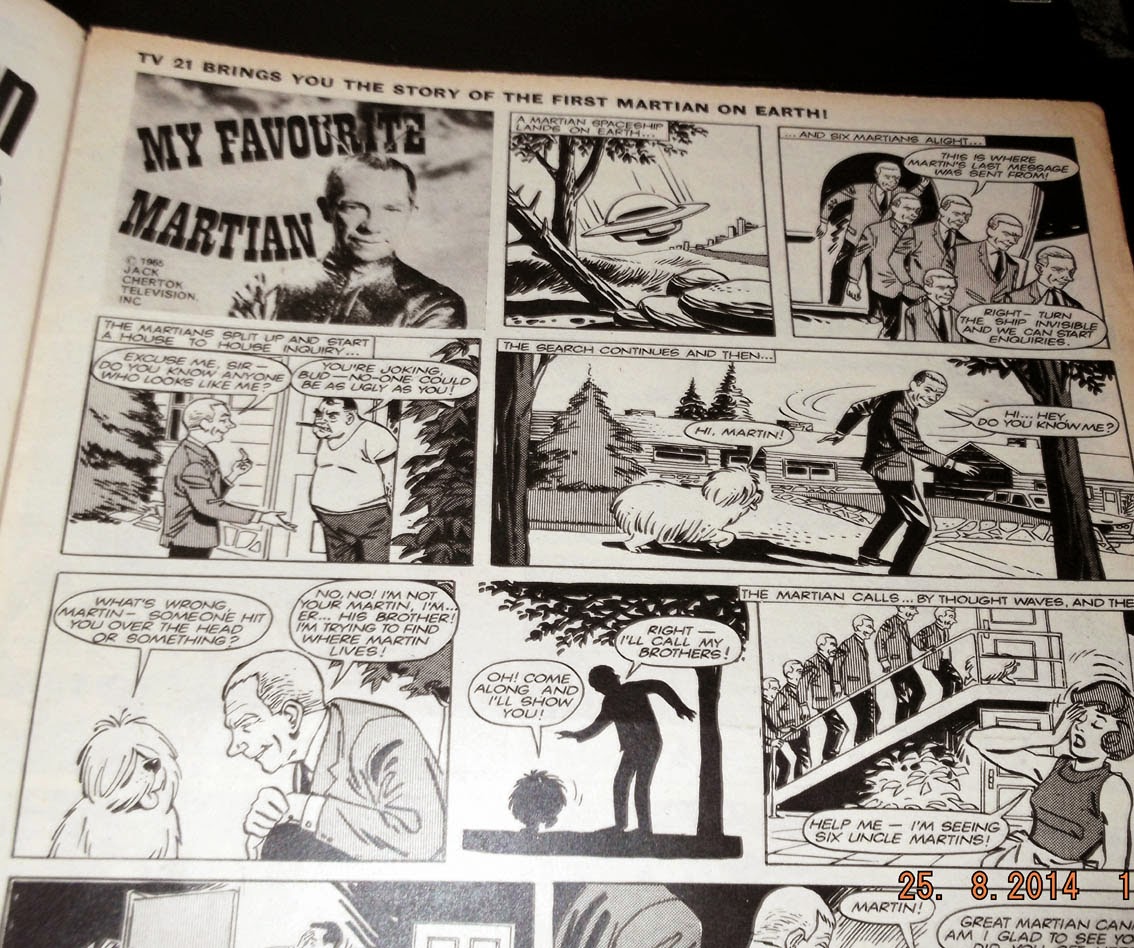 TV21's big selling point in that first year was Stingray, superbly illustrated by Ron Embleton across the centre-spread of the comic. 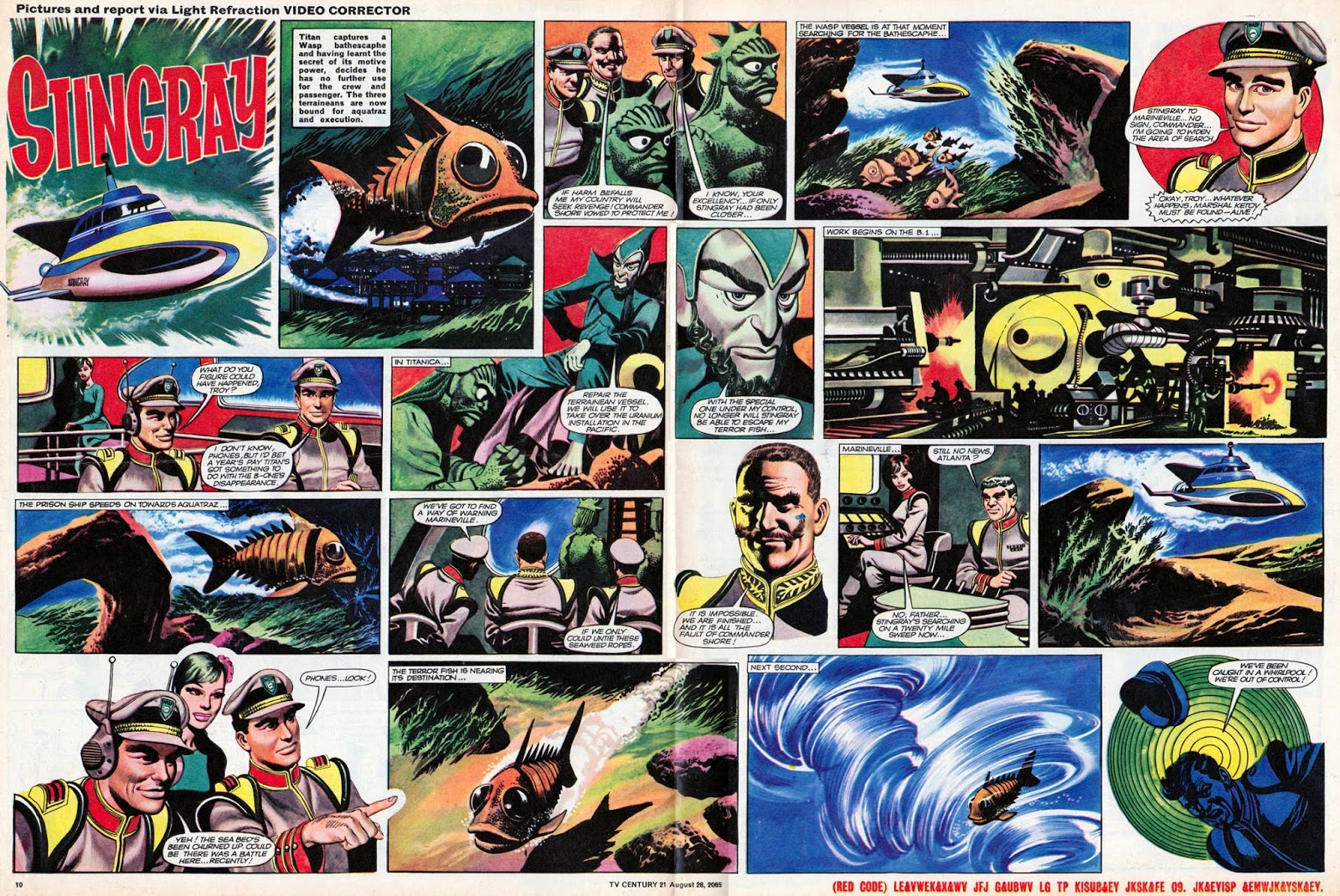 Page 13 and a couple of ads. At the top is one of the many anti-smoking strips that appeared in comics at the time. (You can see more of them at this link.) 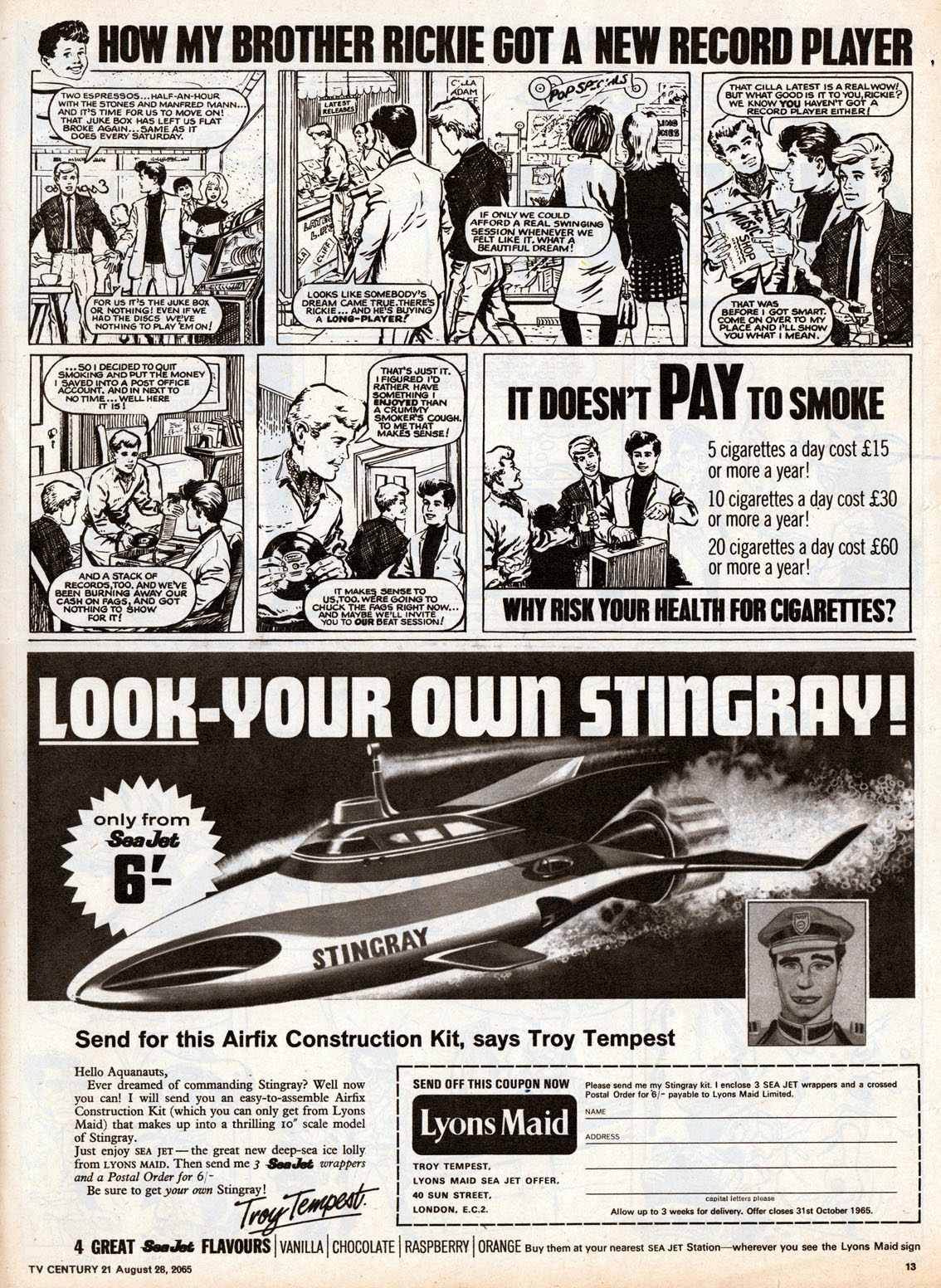 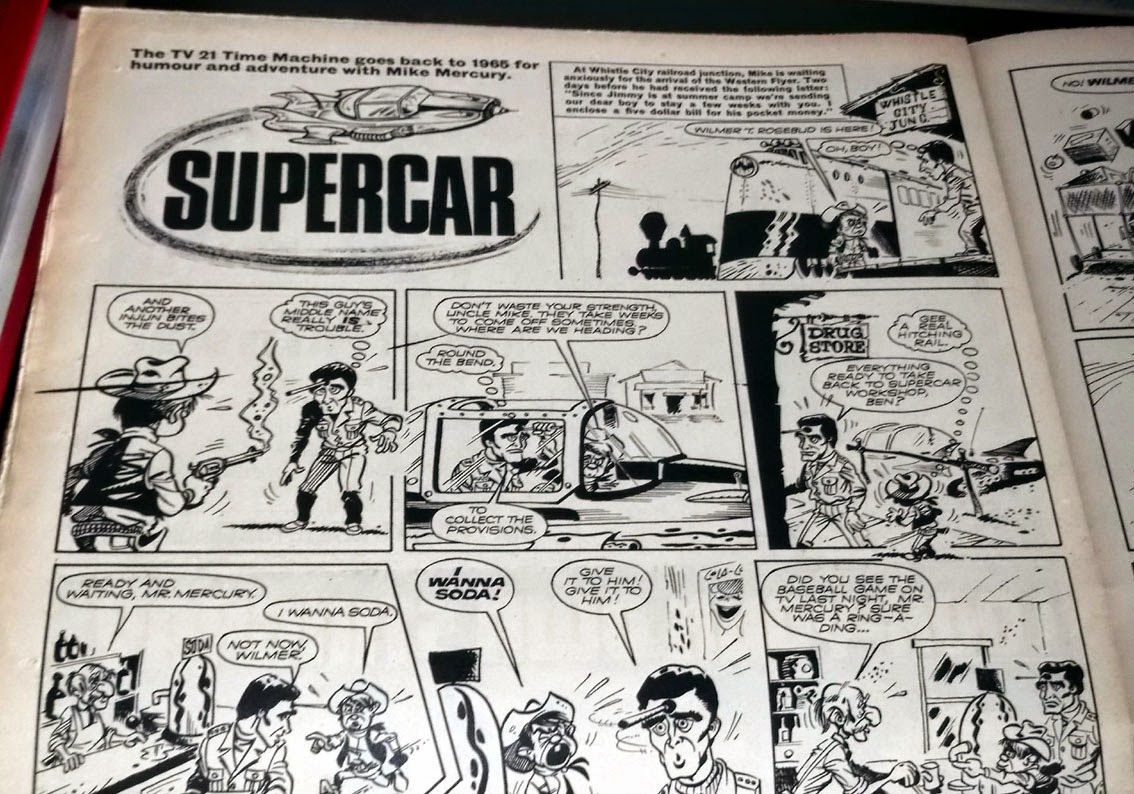 Pages 16 and 17 gave us more superb full colour (a rarity in British comics of the time) with Eric Eden's excellent Lady Penelope serial. 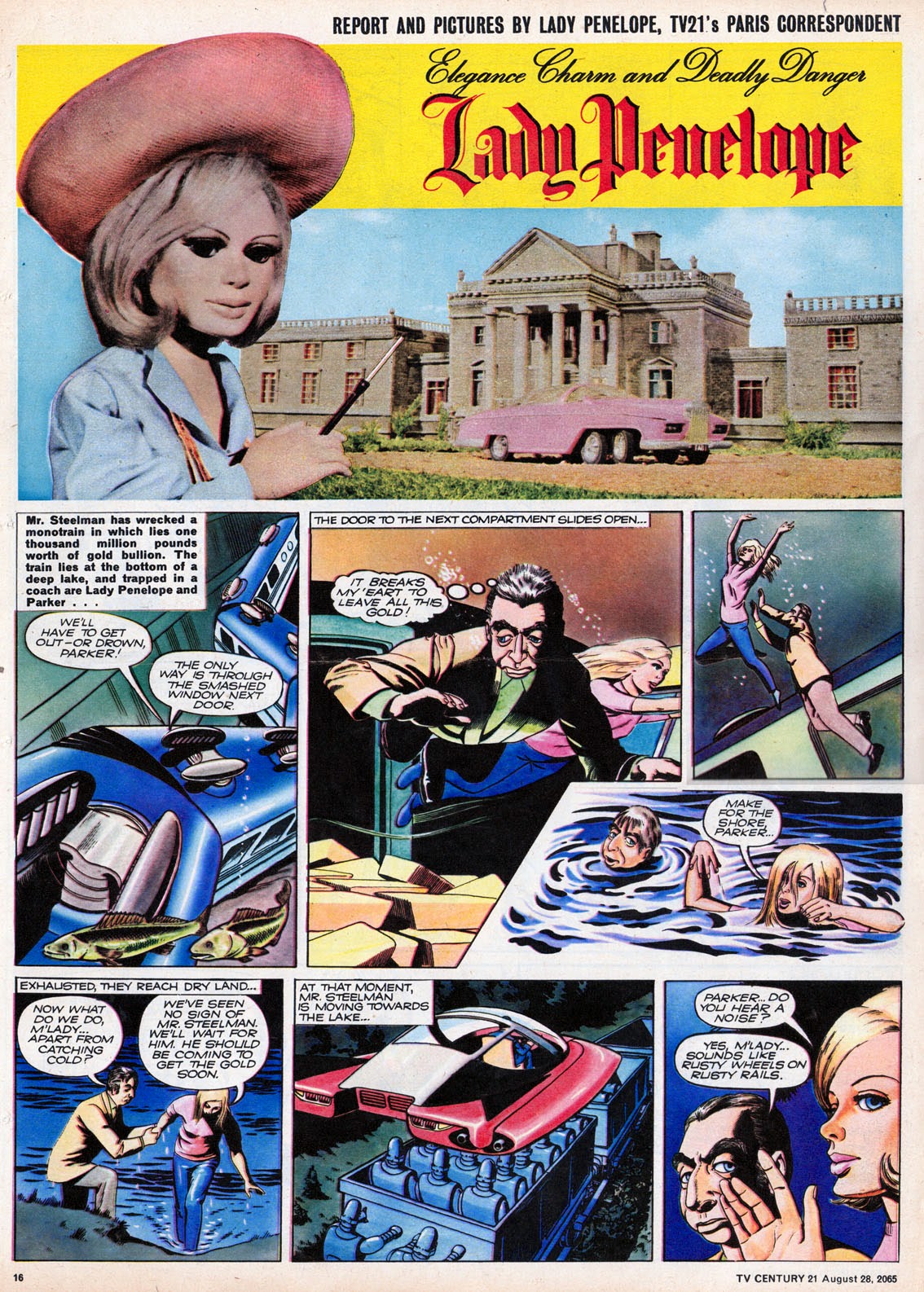 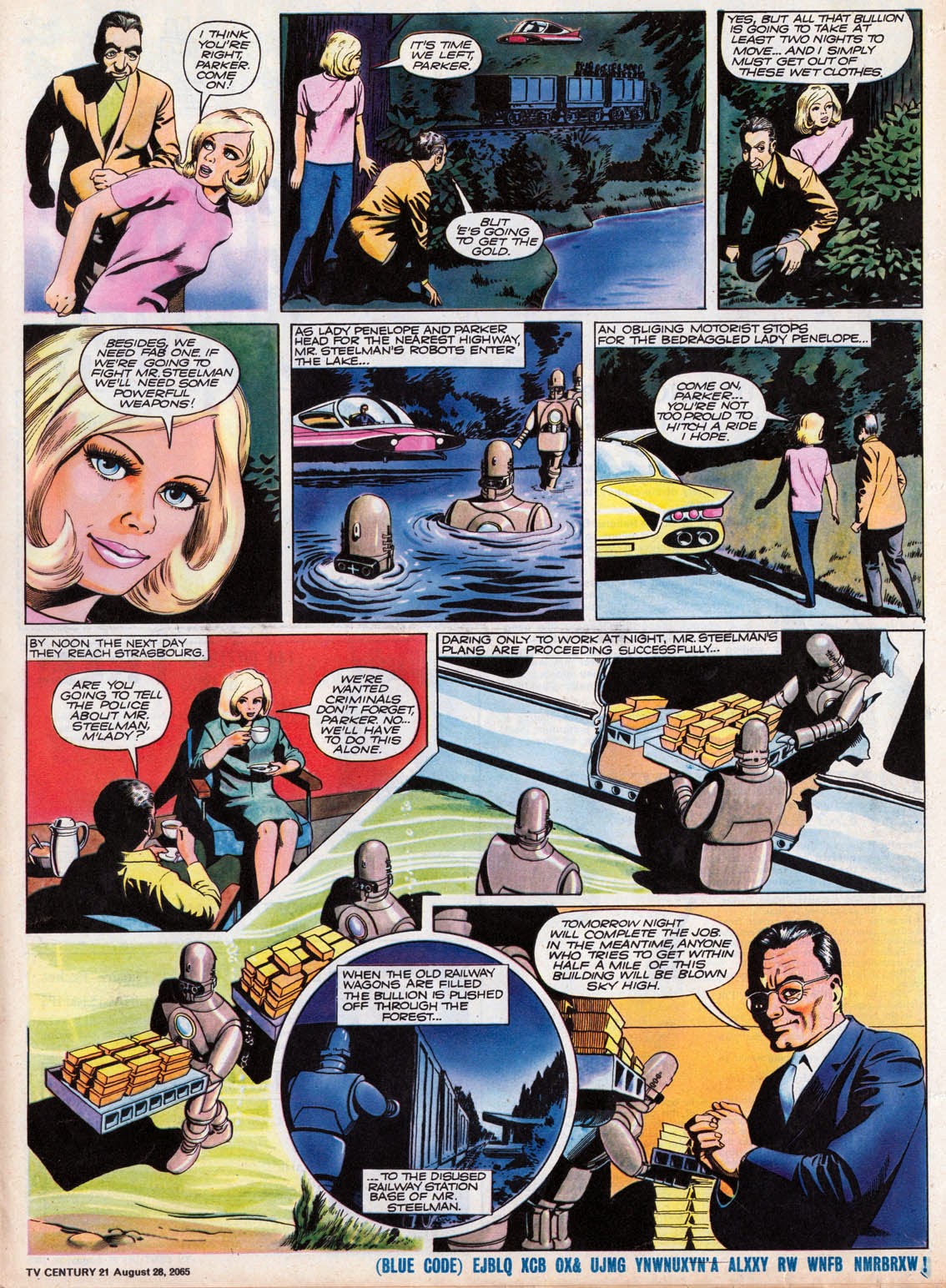 Page 18 featured a variety of snippets including Zoony the Lazoon...

...and this cartoon playing on the Police Box aspect of Doctor Who. I presume 'Ronald' is a reference to Ronald and Reginald, the notorious Kray Twins. (Update: No, of course it's a reference to Ronnie Biggs, of the Great Train Robbery, who was on the run. Thanks for the reminder, Marko!) 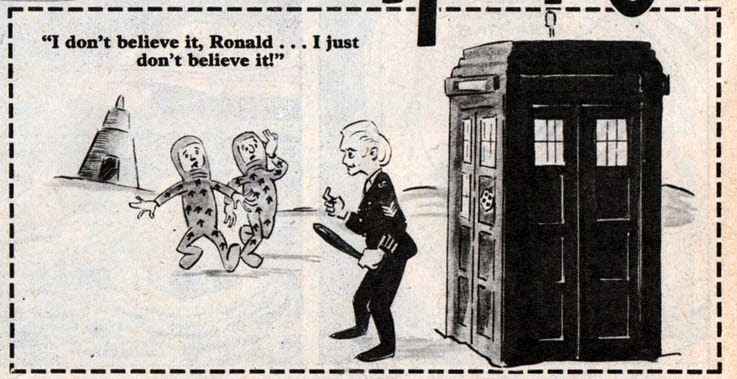 On the back page in its usual position, The Daleks, illustrated by Richard Jennings. Fantastic stuff! 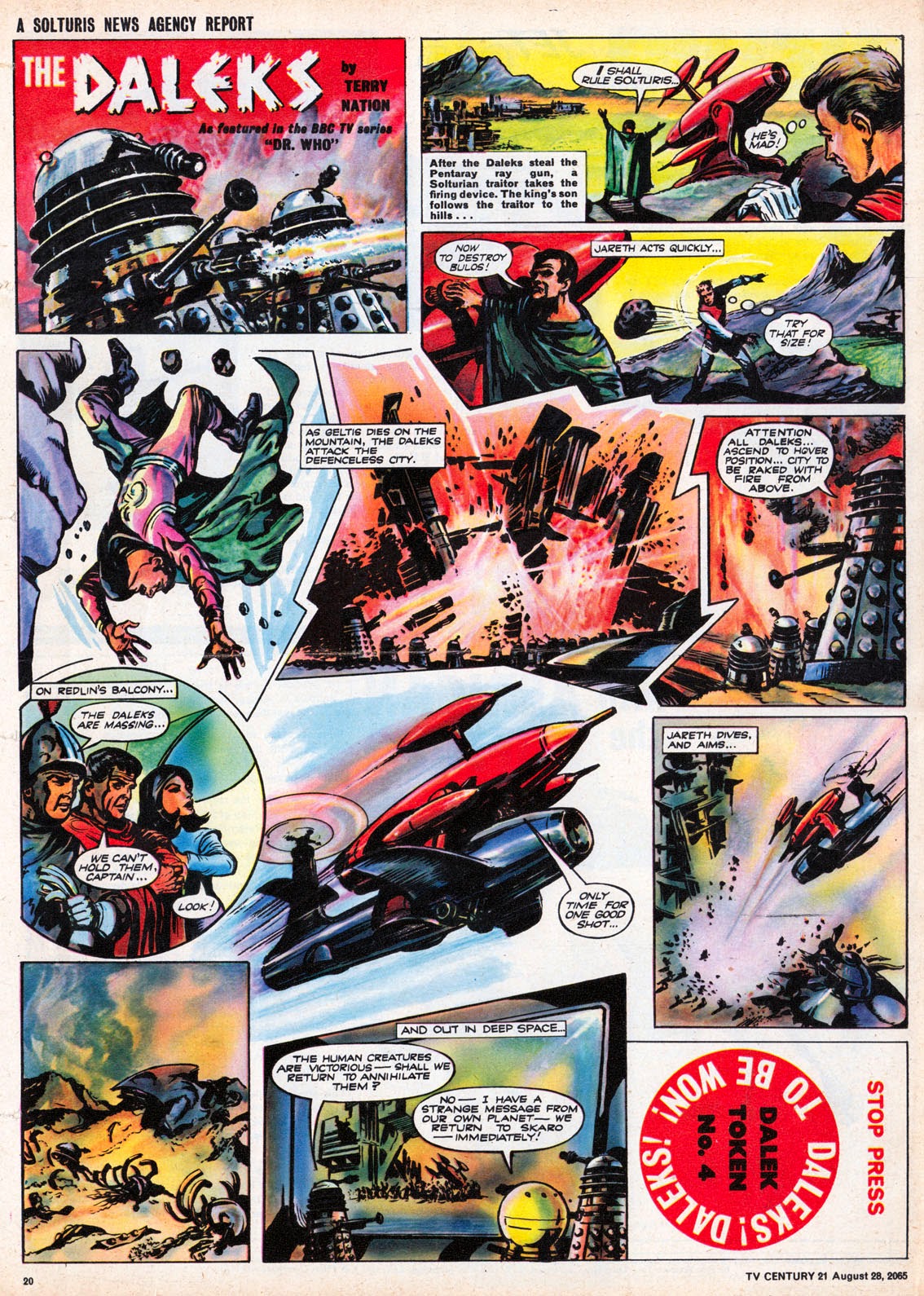 Was it any wonder that TV21 became such a big hit with kids in 1965? This was the must-have comic for children across the UK. Even today, it remains my favourite adventure comic. I hope you enjoy these strips on this soggy Bank Holiday Monday, just as I enjoyed them 49 years ago on an even wetter day!
Posted by Lew Stringer at 14:55

August 1965 was very wet indeed. That Wednesday, I was trapped in Woolworths! We couldn't leave, the water was so deep outside the front! Calamity! Trapped in a shop with thousands of toys, sweets, books and LP records in lovely big square colourful jackets! Oh dear.

I was just about to email you a link to this post when you sent me your comment. I thought you might have an anecdote to share as you'd mentioned before about the wet weather in August 1965.

Yes, TV21 and Woolies, both gone now but happy memories. Well, TV21 is slipping back through a crack in time for one issue anyway. Which reminds me; it's time to draw Zoony!

I had one of those toy guns a couple of years later, but it was a 'Man from Uncle' gun that came with a silencer, eye-sight and weird shoulder attachment, but no holster. Maybe that's what you had? Have a look: http://www.mullocksauctions.co.uk/lot-57379-man_from_u_n_c_l_e__lone_star_gun_set_broom.html
I was, of course, the envy of my friends.

Lew,
the Ronald mentioned in the Tardis cartoon probably refers to Ronald Biggs, The Great Train Robber, who had recently escaped from prison in early July 1965. So, the cartoon was very topical that summer!
(Marko)

Of course! I had Ronnie Biggs in mind when I read the comic this morning, and knew it referred to him, but when I typed out the post my brain shifted to think of the Kray Twins for some reason. As you said, it's obviously Biggs. It was the main story in the papers that summer. I'll update the post.

Ooo, that's a classy toy gun. You could have definitely been in my gang in 1968. What a shame that these days the real thing would probably be a fking deal breaker.
Guns were so alien to our lives then, whereas a couple of years ago I saw a young lad shot in the face in front of me (he survived).
As a kid, I had the biggest collection of toy guns in the street, everyone borrowed them for our 'army games.'I was Cheviot Rd's arms dealer for cap guns. Years later, at the museum last year we did an evening event drawing for foreign dignitaries that we later found out were all arms dealers, all in London to sell death-dealing wares. And I'd been merrily drawing cartoons for them. I wanted to be sick, and the museum staff were the same. But years ago, as we see here, real guns were a fantasy on our streets. I do wonder what horrors we imagine might be a part of normal life in our near future.
Anyway, back to comics, that's where we all feel safe. God knows that's where I do...

It's a good point worth making, Steve, that real guns were alien to our lives back then. Toy guns were everywhere weren't they? Made of metal too. That James Bond gun had a bit more weight to it than normal cap guns, if I recall correctly. I'm sure I must still have it somewhere but I haven't seen it for years.

Thinking about it, we were inundated with gun imagery in comic strips, films, TV shows, toy shops, but thankfully it didn't influence us to buy real ones later. Perhaps we got all that out of our systems when we were young.

Always great to see an old TV 21 I used to have. Have you got them all?
My gun of the time was a 3 - in - 1. It was a black revolver that fired caps if you pulled the trigger or a pump action could turn it into a spud gun or a water pistol. You could even combine the caps/spud features. Curiously enough I too grew up with absolutely no interest in real guns whatsoever. And yet a certain line of thought would have parents believe that toy weapons would have your child grow up to be a violent killer! Not so!

Hi John, Yes I have most of the first series of TV21. I think there's just 3 or 4 missing but I'm not bothered about that.

I don't have so many of the second series though. I did have, but threw out or sold quite a few years ago. But series 2 isn't a patch on the 1960s run so I'm not fussed about getting those back.

I think I remember that toy gun you mention. I didn't have one of those but I did have a metal spud-gun. Like you, I grew up having no interest in real guns despite playing with toy versions throughout my childhood. So yeah, I think the idea that toy guns lead to a desensitization of using real weapons is complete nonsense.

Was your metal spud gun light blue? If so, I also had 2 of those.
Feel free to dip into your TV 21 archives as often as you like!

I'm sure I'll be venturing into my TV21 archives again in a few weeks. S.I.G!