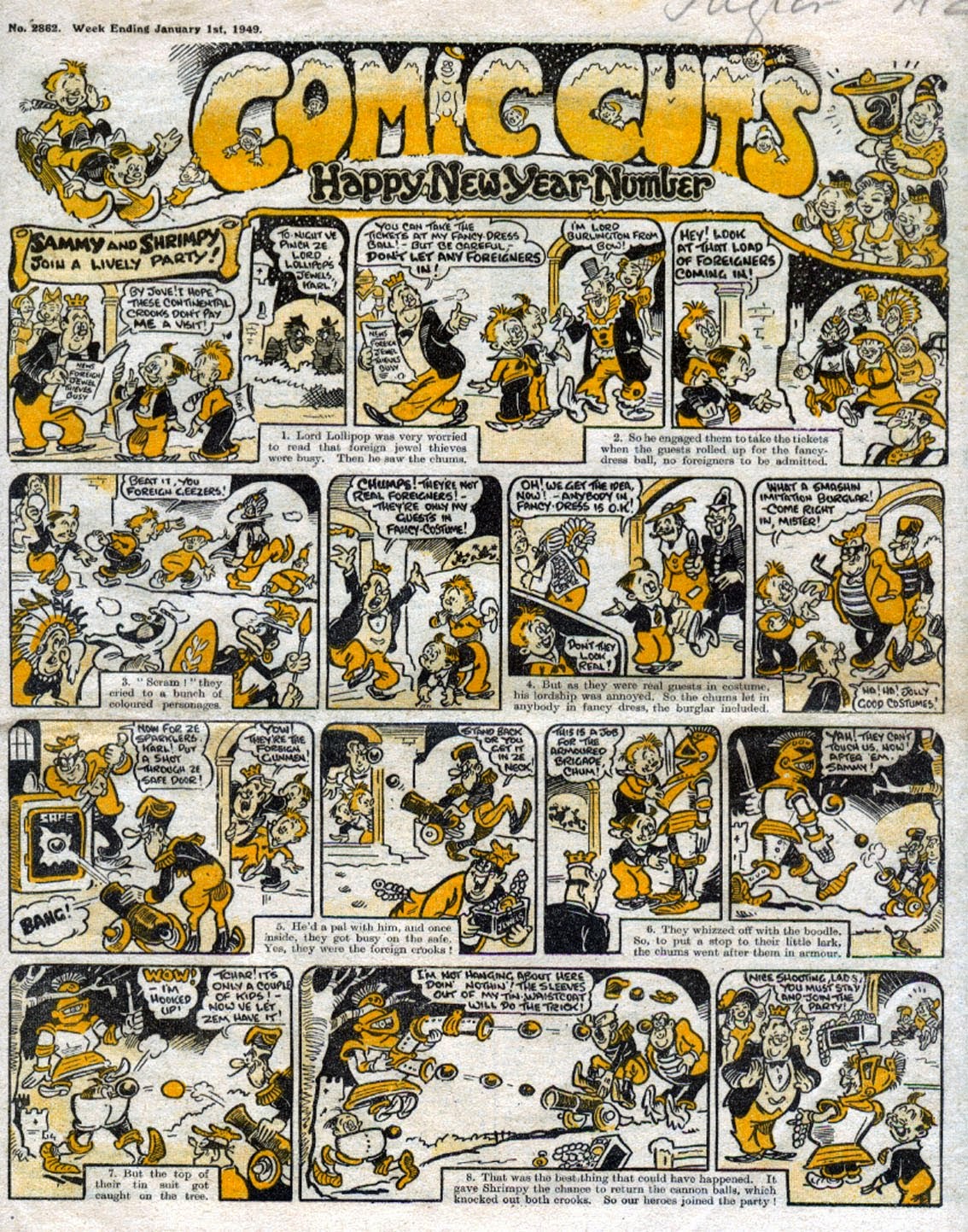 Just time for one last post this year, and here's the issue of Comic Cuts dated January 1st 1949. Yes, this issue would have been in the shops 66 years ago, at the end of 1948. Long-time visitors to this blog may remember the cover from when I showed it a few years ago, (which I think may be by Reg Parlett) but I'm showing a few more pages from it tonight. Some dialogue in that cover and the character's attitude to foreigners is pretty bad by modern standards.

Like several comics of the time, Comic Cuts had only 8 pages, which were 50/50 text stories and strips. Here's a text story for New Year's Eve with Kenton Steel, Ace of 'Tecs... 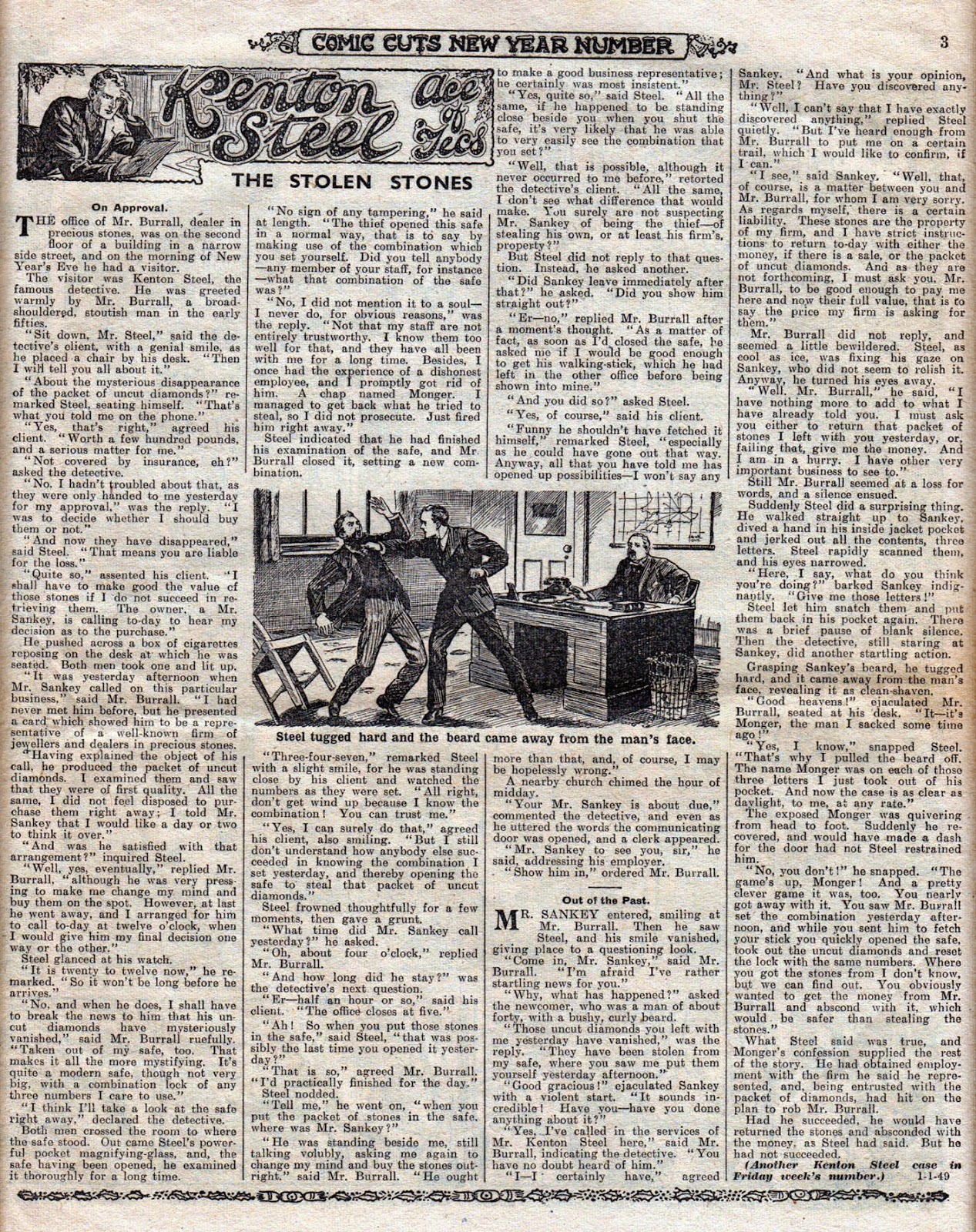 With only 8 pages Comic Cuts had to give value for money, and its centre pages were crammed with short strips. I usually show just one or two individually but to demonstrate just how packed it was I've scanned the entire centre pages this time. Click to enlarge, and you may have to click again to see it full size... 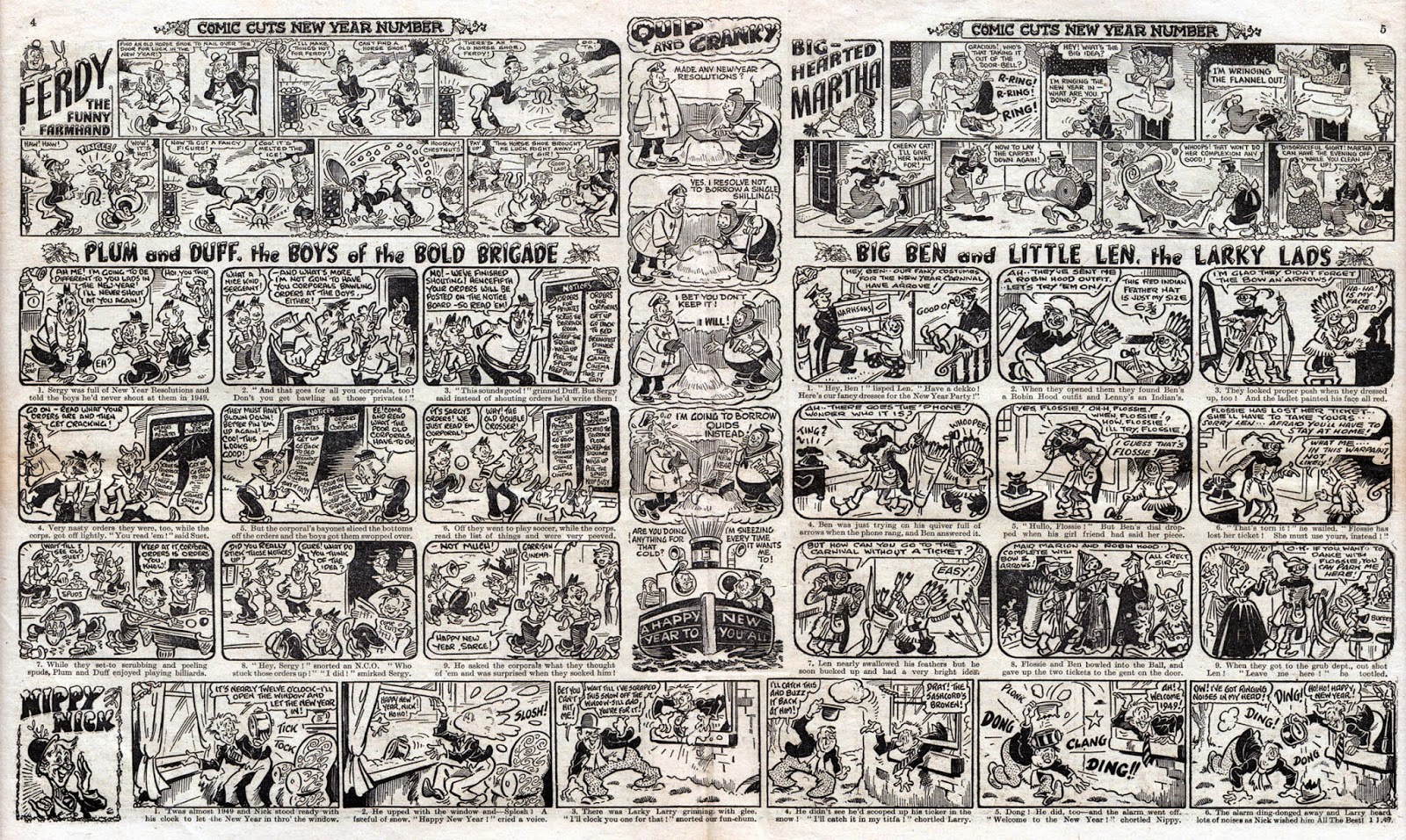 A quick plug for the Comicraft New Year's Day Font Sale which takes place all day on Jan.1st. Comicraft produce the best comic book fonts in the business, so if you're doing your own comic, or you want comic style fonts for whatever project you might be working on, go to the best! (I use them for the Blimey logo and bits in the sidebar.) Buy the fonts, download them, and start using 'em!
http://www.comicbookfonts.com/
Posted by Lew Stringer at 18:45

This comic MUST be old, as it even predates ME!!
Have a great New Year's Eve, Lew.

There's some a lot older than that on my blog John. Have a root around when you have time.

I stayed in this year. Hope you had a good evening.

Lew, this blog has become something to look forward to during the years, so thanks again and have a happy one!

Hi Lew . Hope you crawled into the New Year all in one piece!! Man...look at the sheer comic genius of that artwork .Even the lettering is full of individual life. Wonderful detail in every corner. Lovely.

I stayed in and drank nothing stronger than a cup of tea Paddykool so I survived intact. I enjoyed watching Jools Holland's show. Hope you had a good one.

Yes, the lettering really has character (if you'll pardon the pun). Most, if not all, of the artists back then lettered their own strips. It's often a good way of working out who drew the strips, as their art styles are all so similar.

Happy New Year, Lew - it was a quiet night for me too (apart from the fireworks banging nearby). Pity you've removed the holly from your masthead - it's still Christmas till the 6th.

New Year, new masthead. I thought it was time for a change, as the old design had been up for 18 months. I know they say Christmas lasts until the 6th but it doesn't really feel like it so I thought the holly should go.

Yeah, fireworks were going off around here all evening from about 5pm yesterday. Really loud ones too. Kind of defeats the point if they let them off that early but they probably did it for their kids.

HAPPY NEW YEAR, LEW!
Yeah, it was tea in the house for me, too! No hangovers for us. eh?
Looking forward to another year of Blimey.
Good health to you, sir!

Happy New Year, John. I was going to go out but the party was canceled. I didn't mind staying in though. I went out every NYE from 1976 to 2011 so the idea wore a bit thin over the years.

Happy New Year to you Lew. May the best of the past be the worst of the future.
I was too slow to respond to your requests blog of a few weeks ago, but am looking forward to whatever treats you have for us in 2015.

Happy New Year Colin! I hope you'll enjoy what's coming up on this blog. I have a few ideas in mind but beyond that it's a mystery to me too at the moment! :)