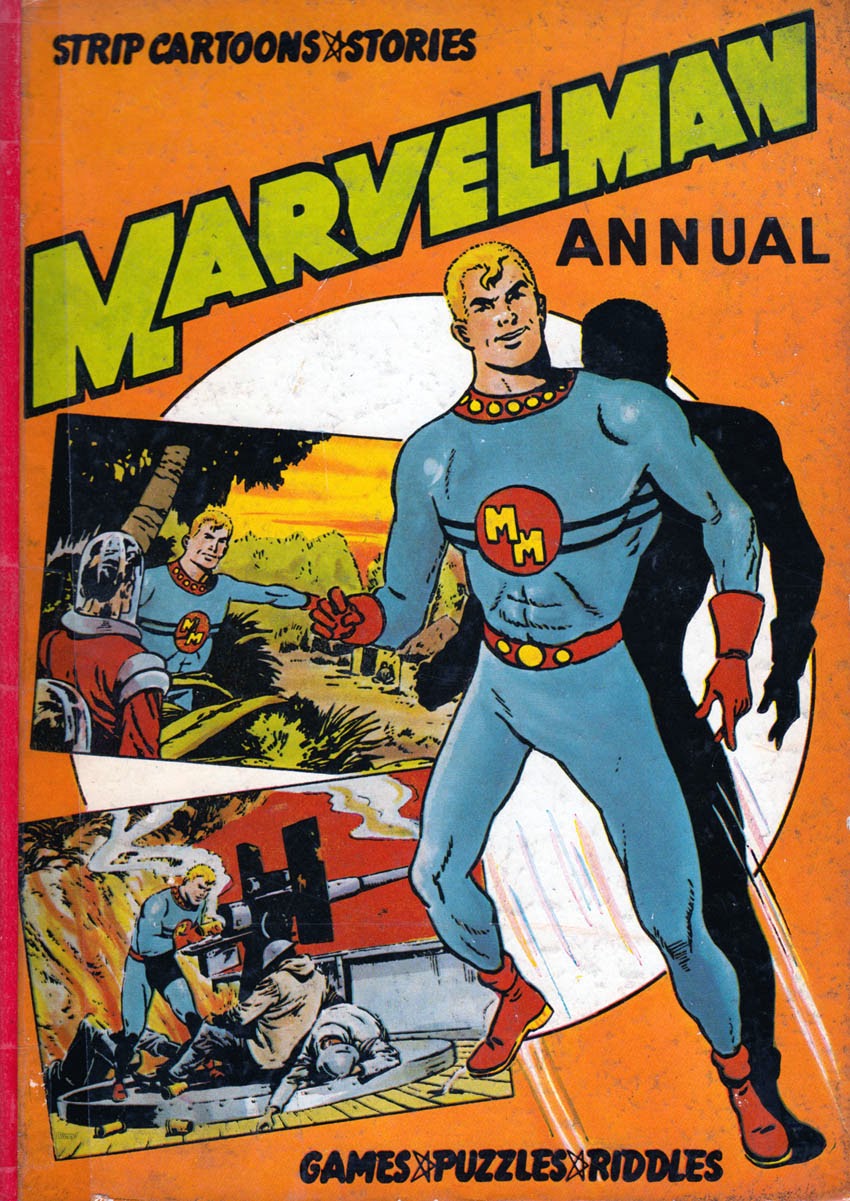 Marvelman was probably the UK's most popular superhero, as not only did he have a weekly comic in the 1950s to early 1960s he also had several hardback annuals. (As did his companion crime-fighter Young Marvelman.) I recently bought a copy of the Marvelman Annual that was published in 1959 and thought I'd show a few pages here. 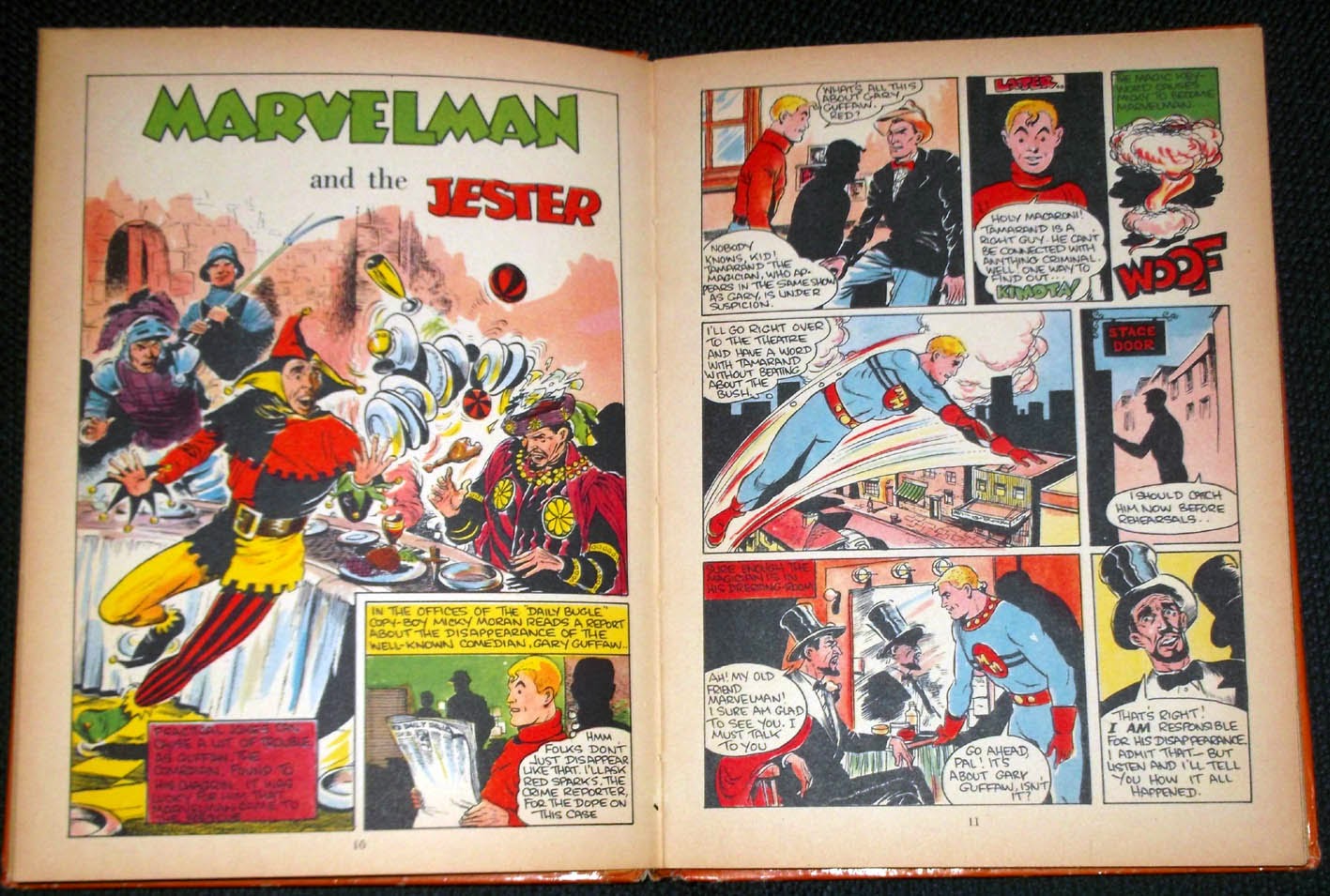 This 96 page hardback was published by Len Miller and claims the illustrations are all by Mick Anglo, although that wasn't the case. I suspect that some of the strips are the early work of Don Lawrence, who drew a lot of the Marvelman strips back then.

The book has a good mixture of strips, text stories, puzzles, and a four page Flip and Flop humour strip by Denis Gifford... 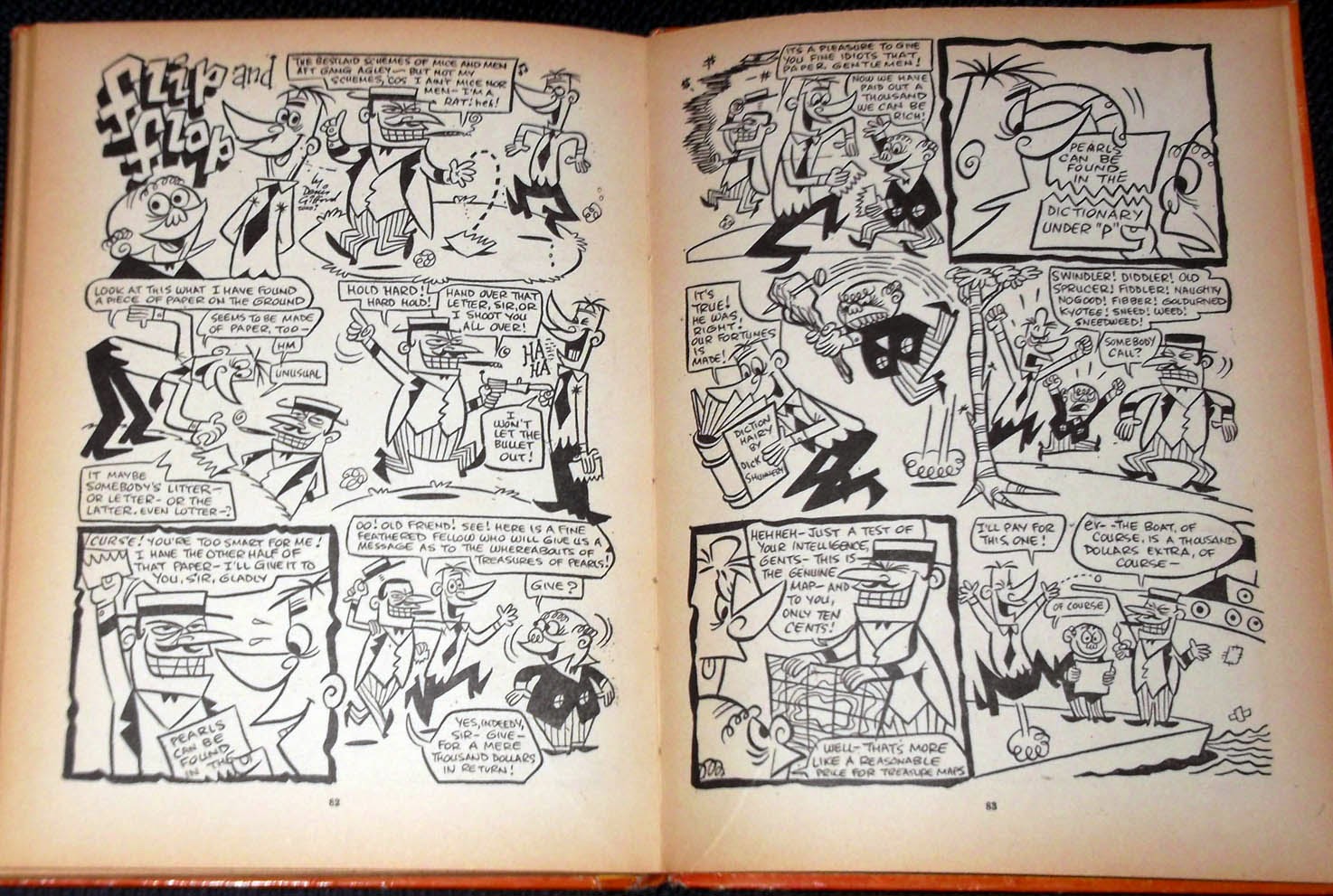 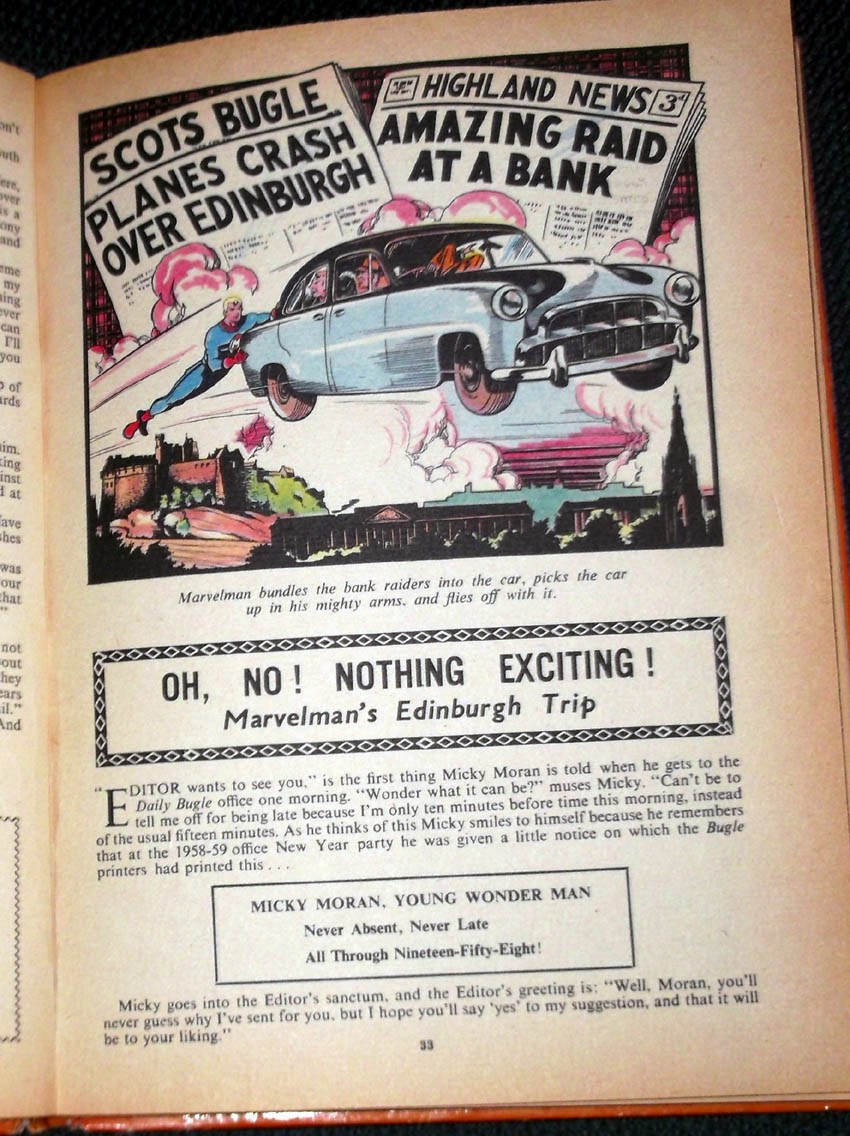 There's also a Doc Holliday strip reprinted (and translated) from a European western comic. It's illustrated by the Spanish artrist José Gonzalez, who a few years later would produce fantastic work on the Vampirella comic. 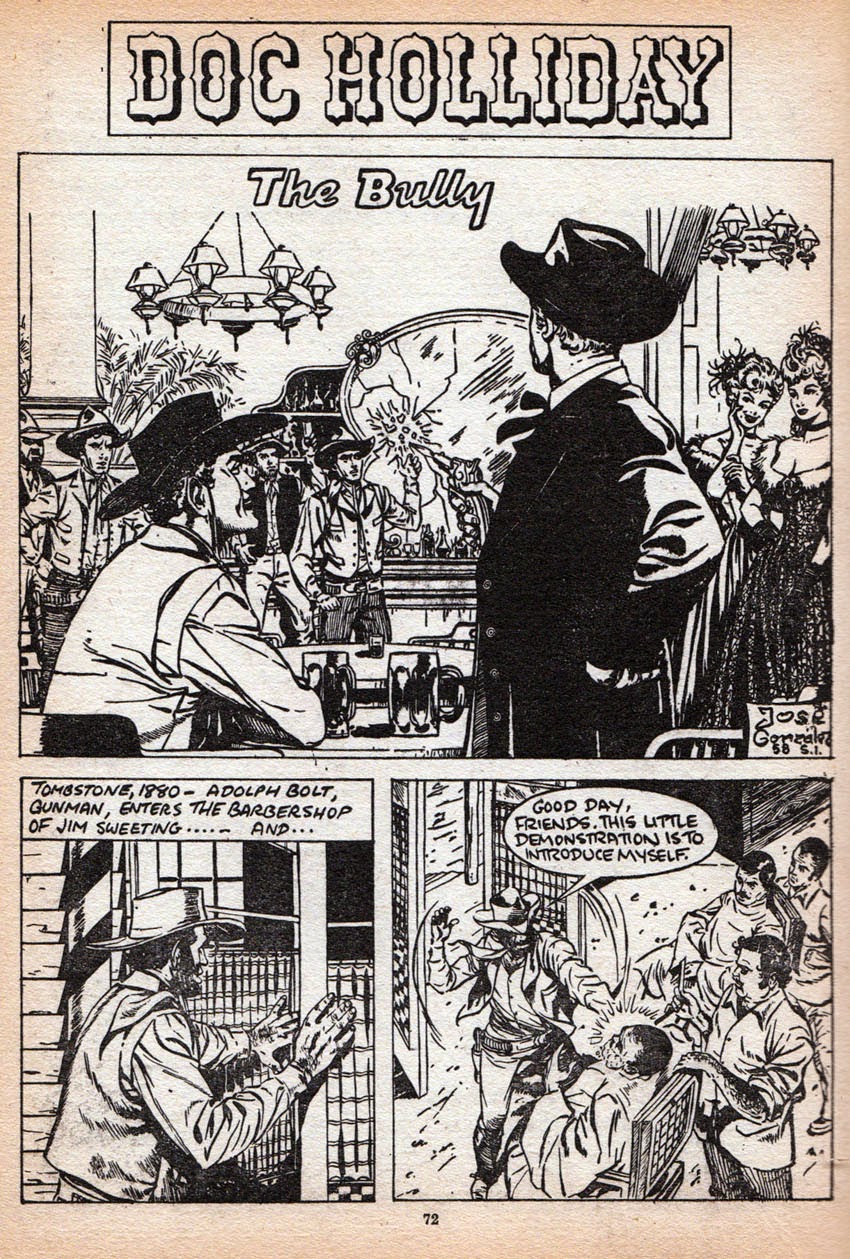 It has to be said that the Marvelman stories were notably daft, and often contrived. Sometimes due to tight deadlines no doubt, but sometimes deliberately so. For example, in the 10 page story Pipe Dream, Marvelman's arch enemy Gargunza invents a method of time travel... using a bong pipe!

It's hard to imagine the creators of the strip were innocent as to what bong pipes were used for, and Gargunza certainly goes on a 'trip'. Even more amusing is that when Marvelman discovers the pipe he wastes no time in trying it out himself!

Anyway, here's the full story for your entertainment. Due to the printing limitations of the time, the strip switches from colour to black and white throughout, which is pretty trippy in itself. Don't do drugs, kids! 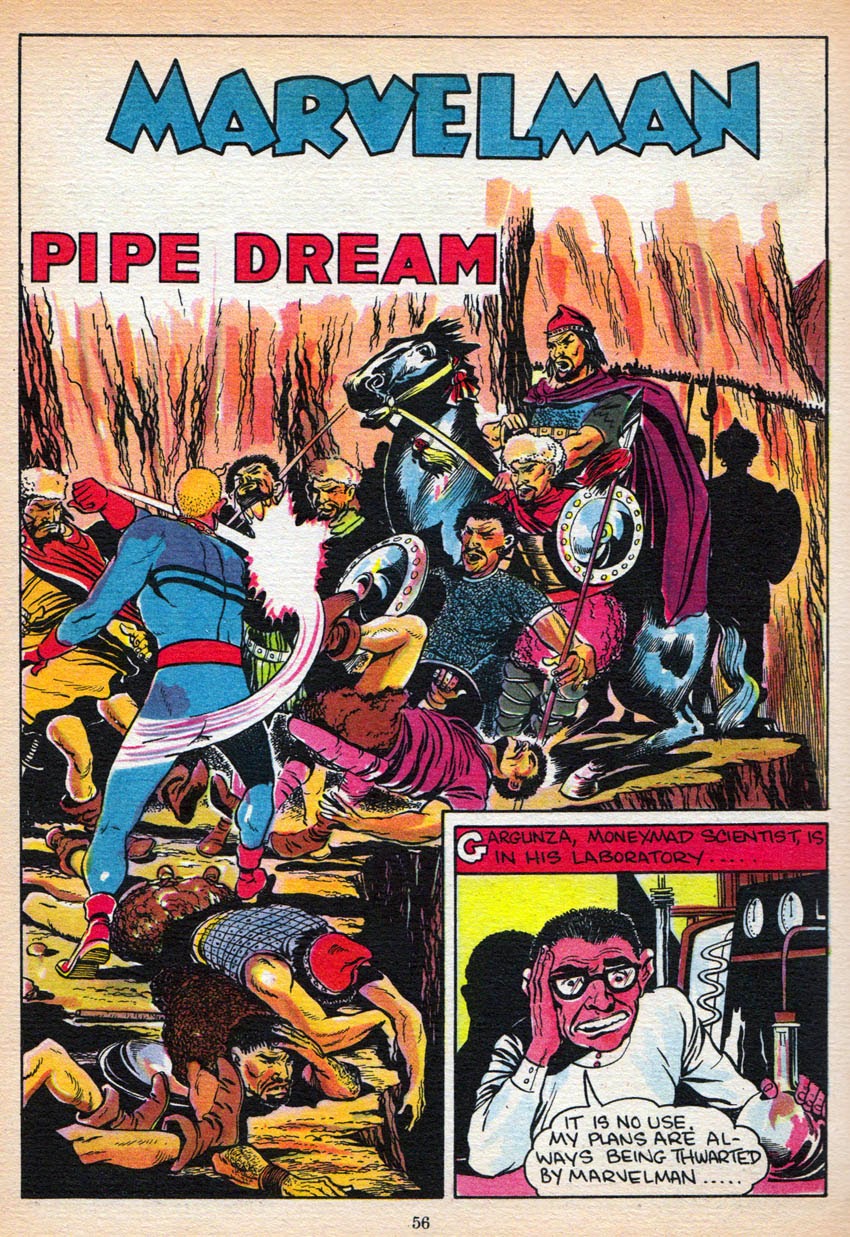 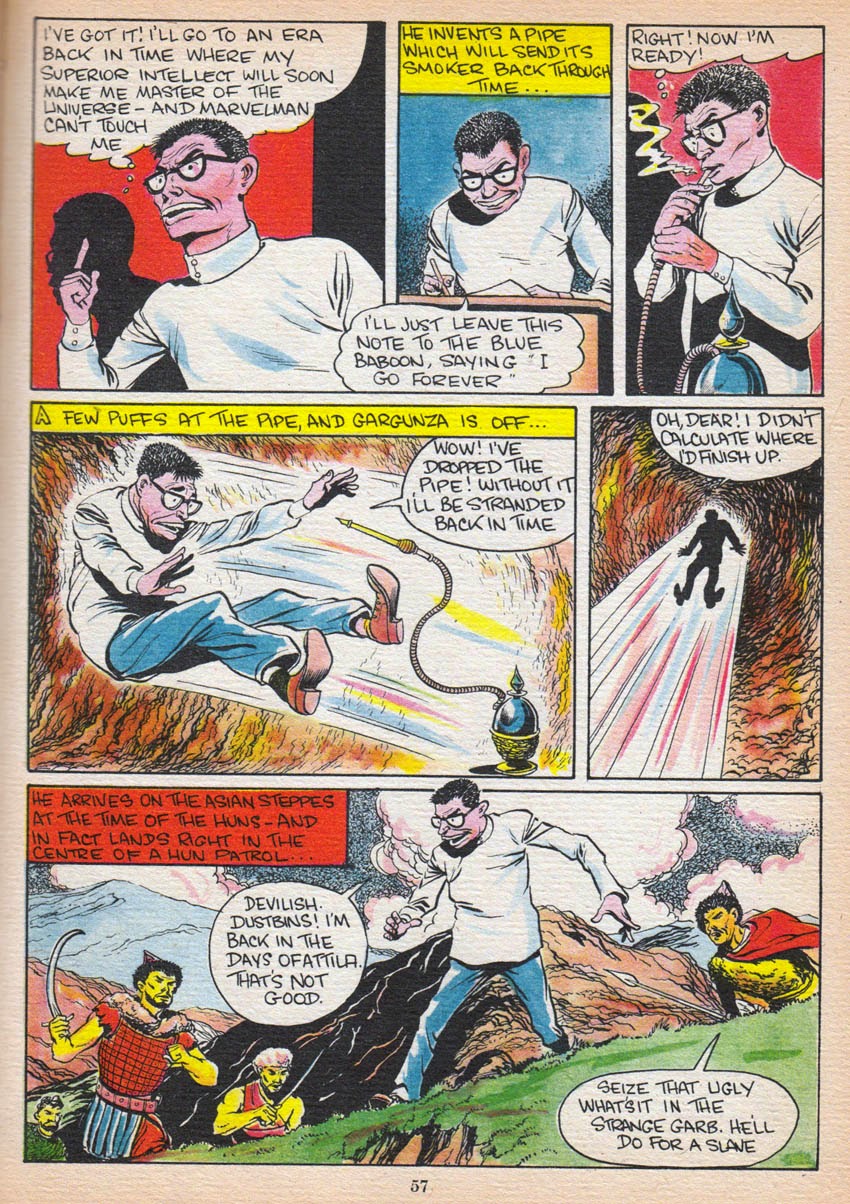 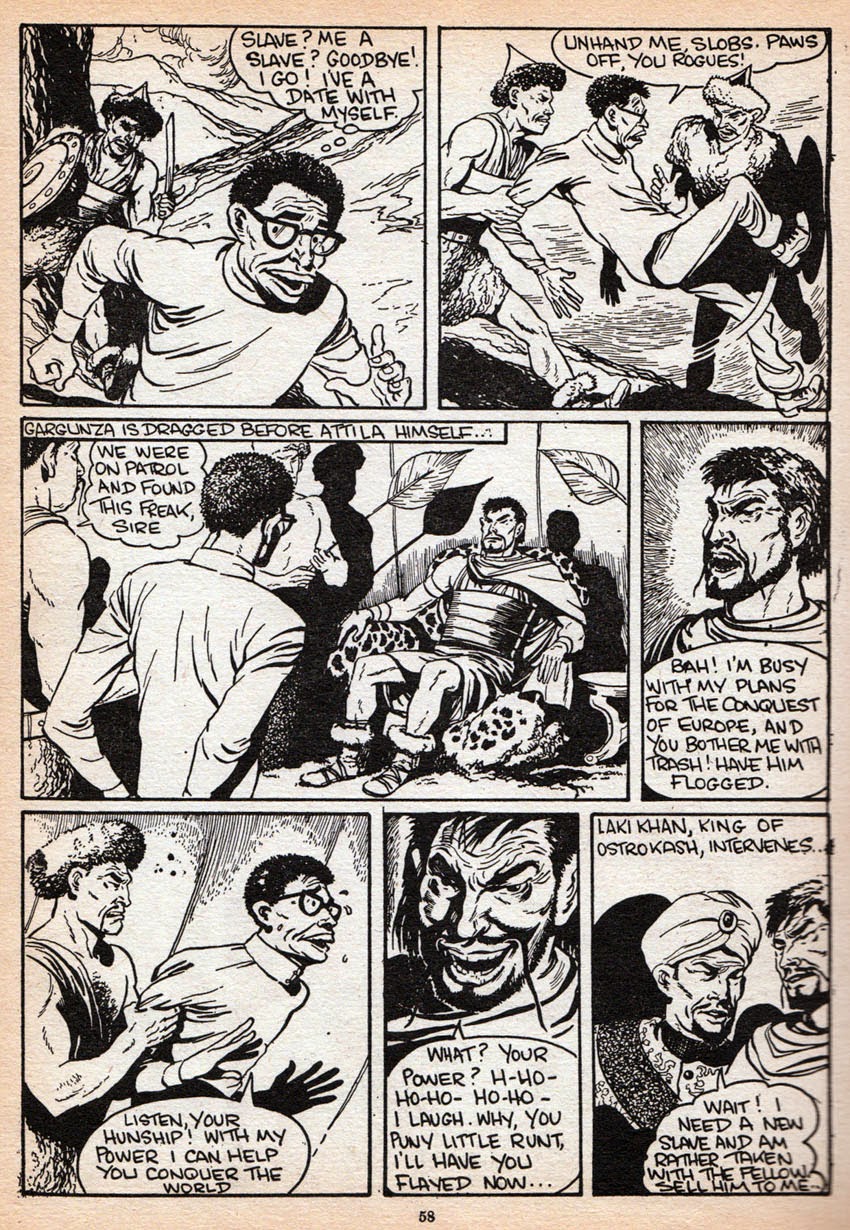 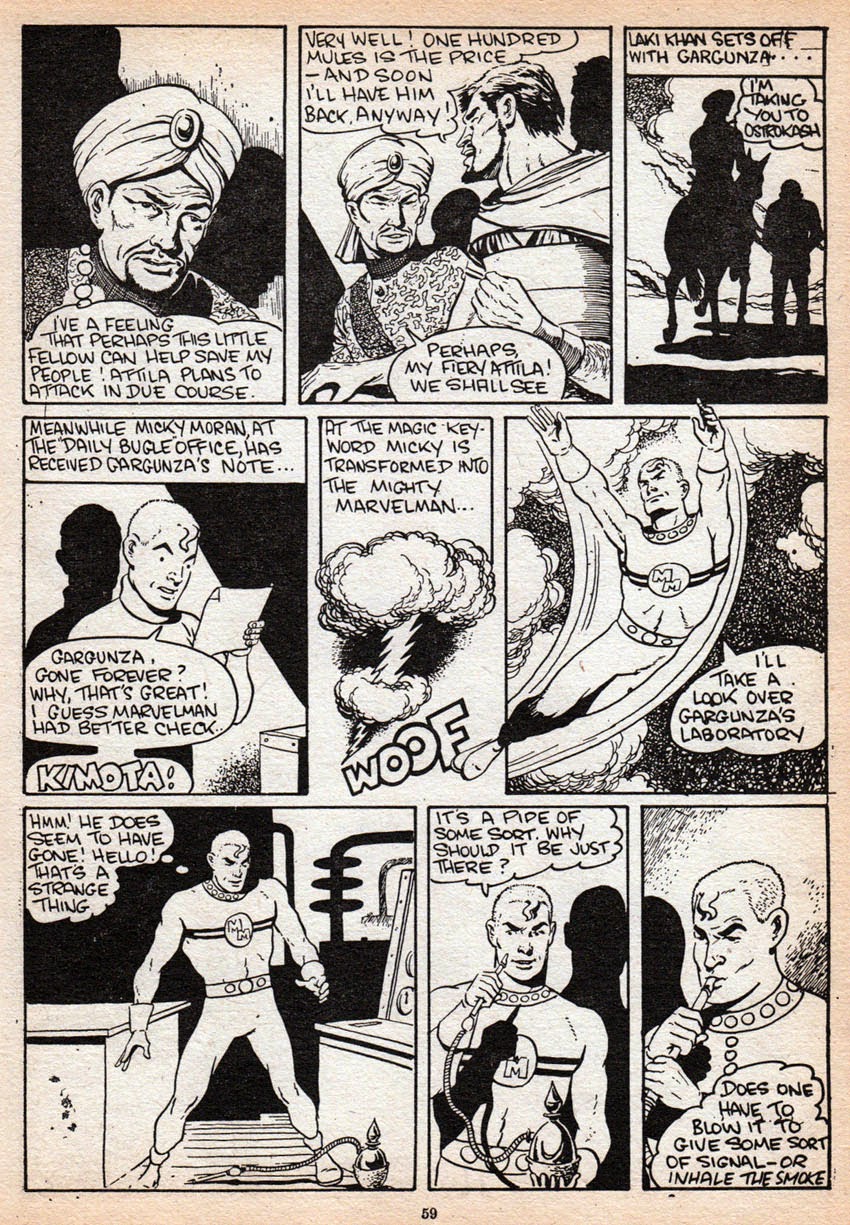 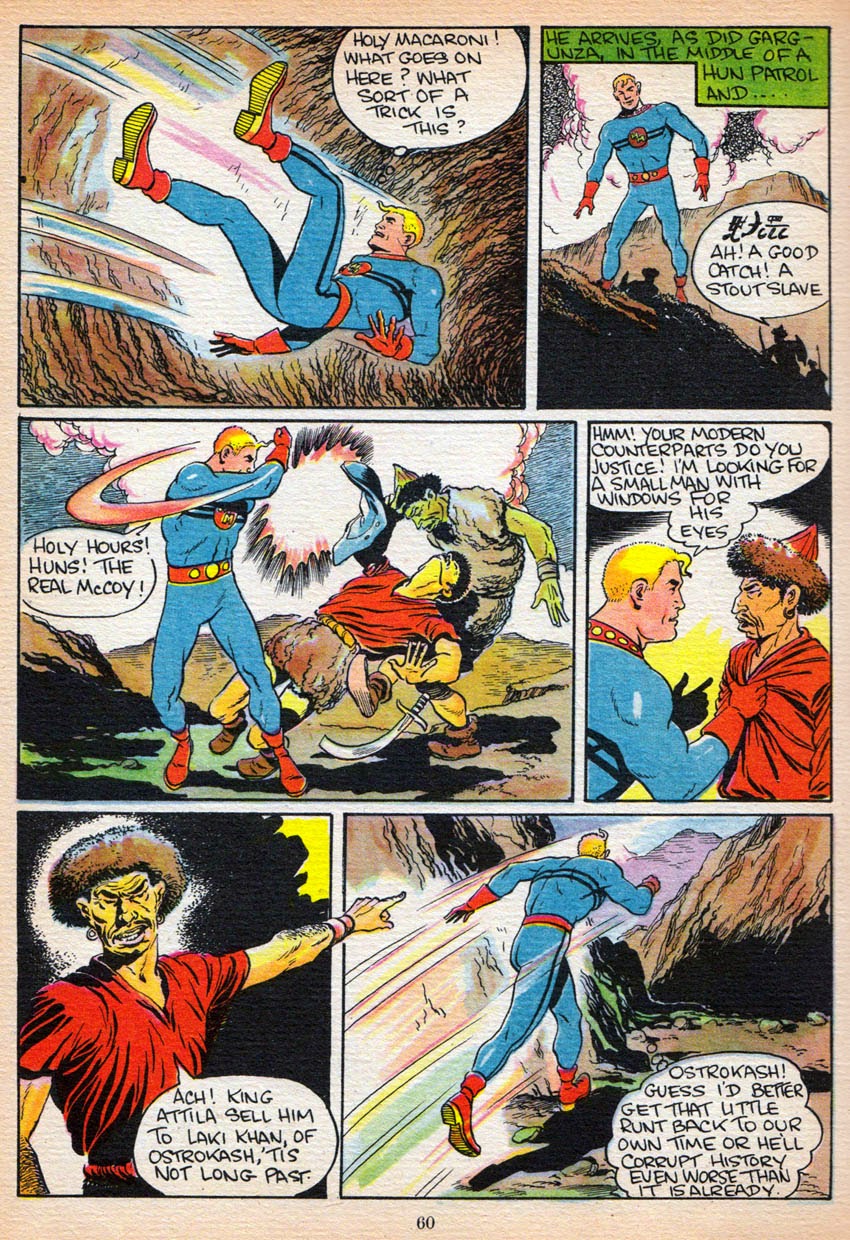 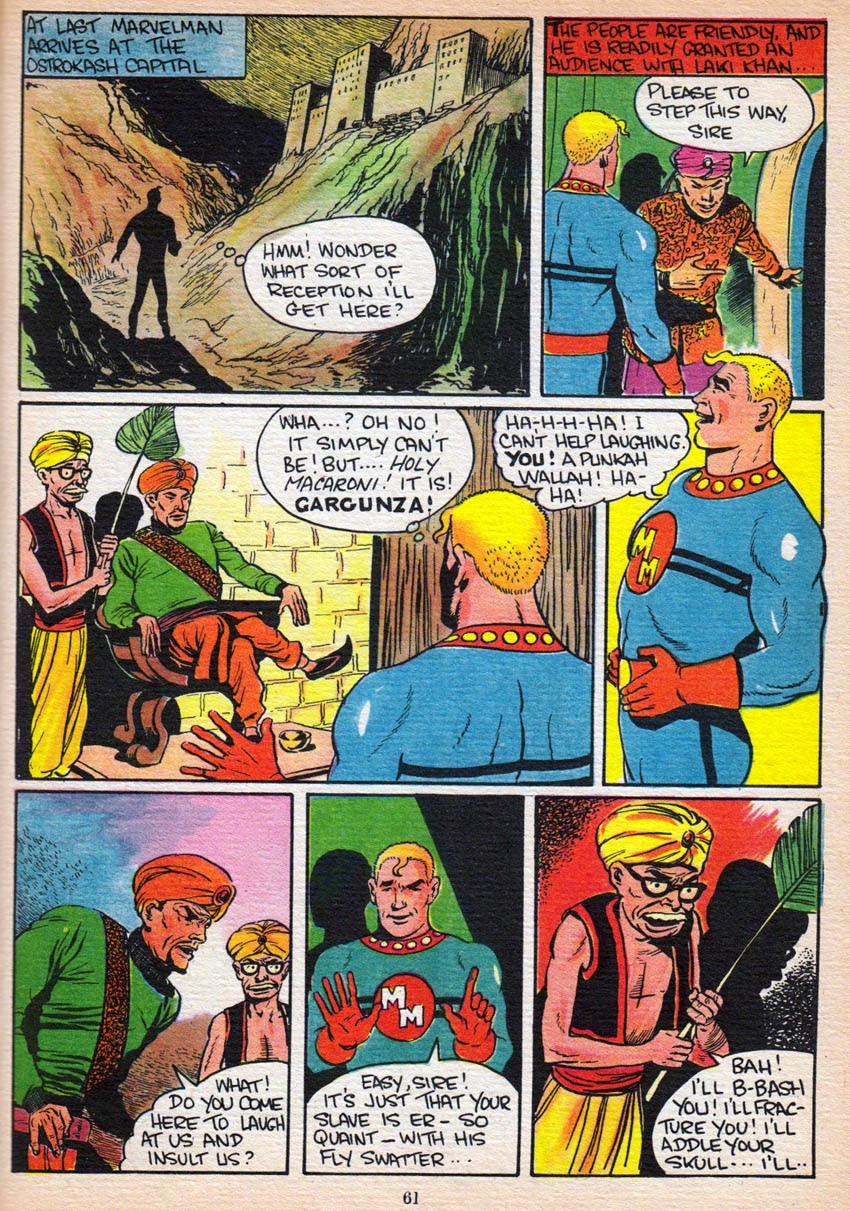 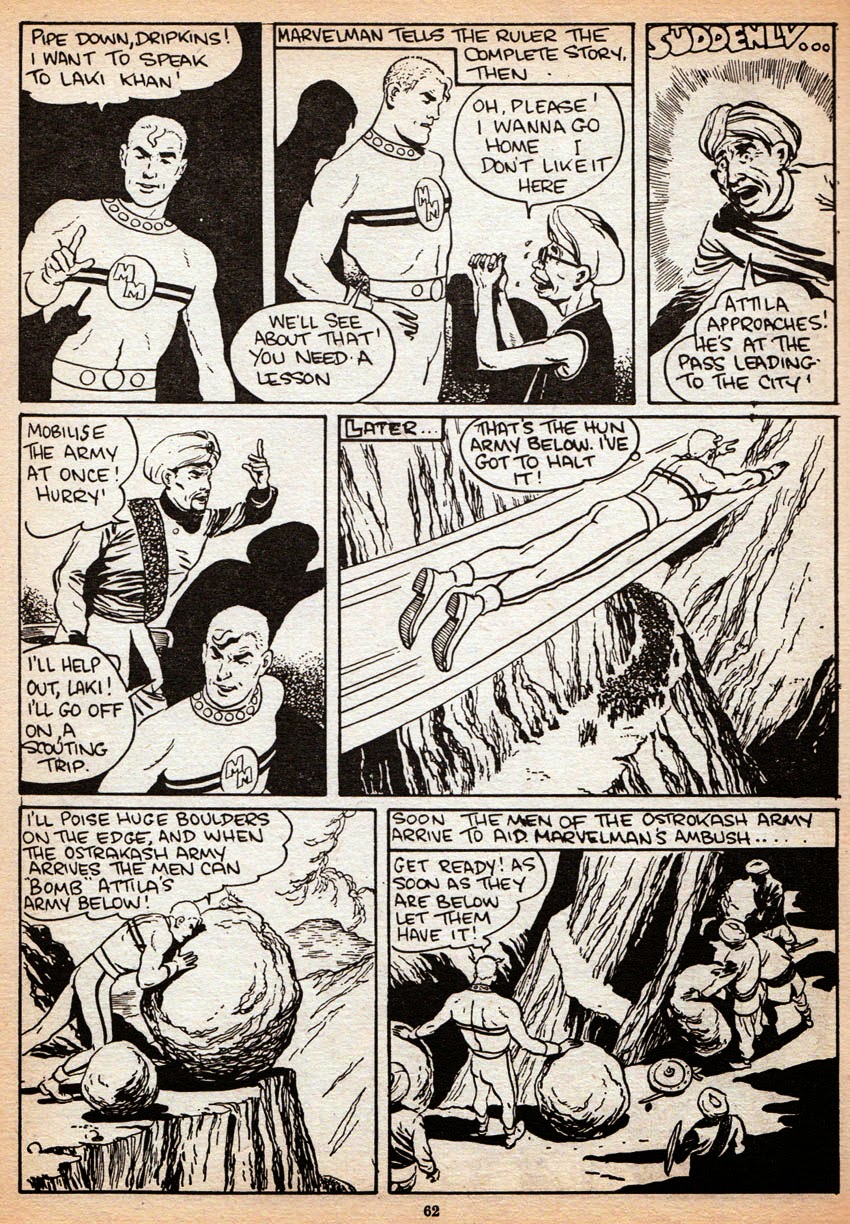 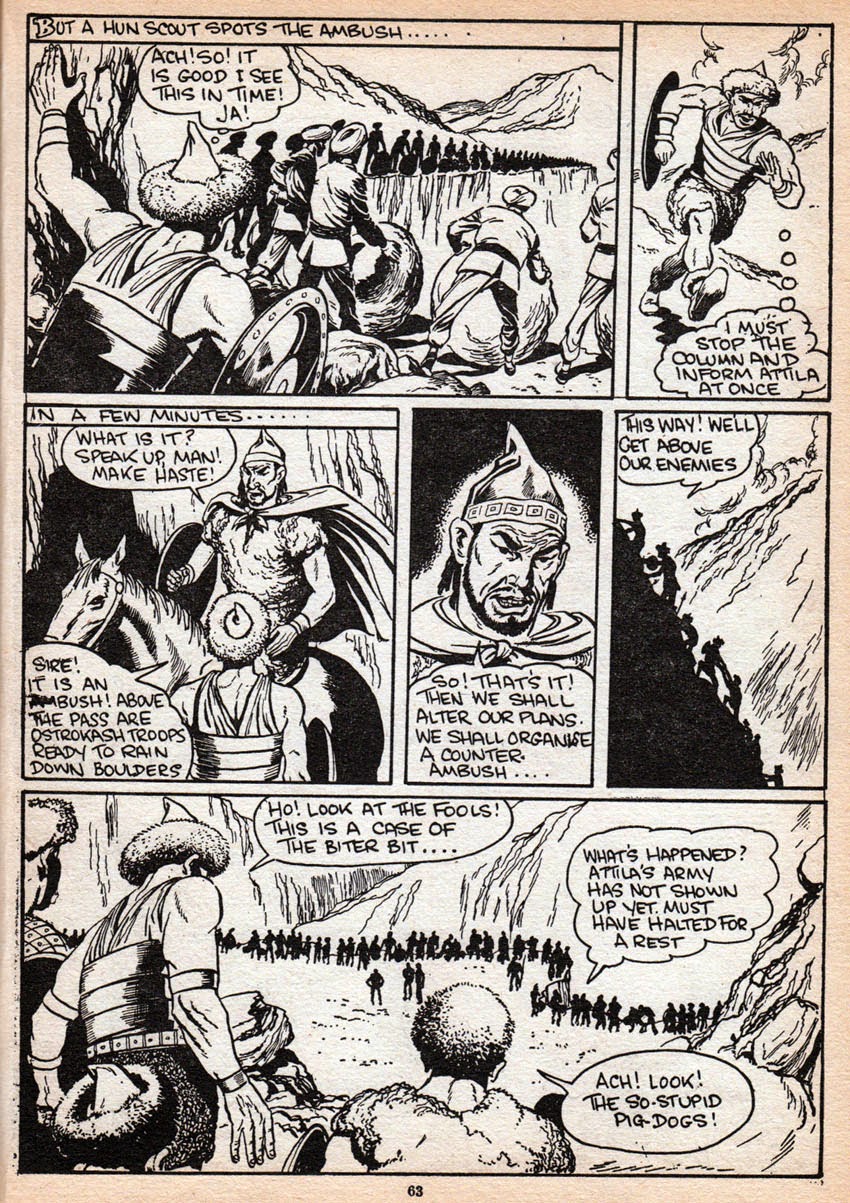 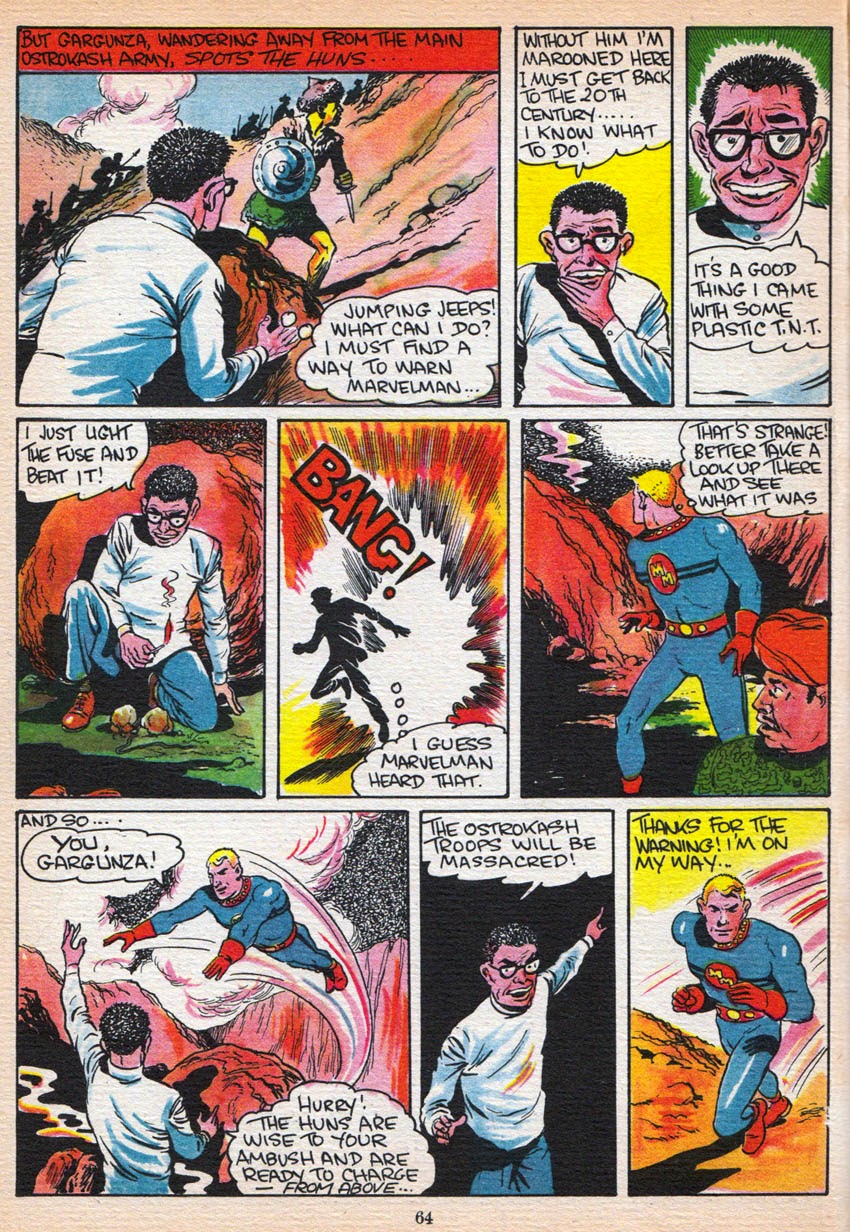 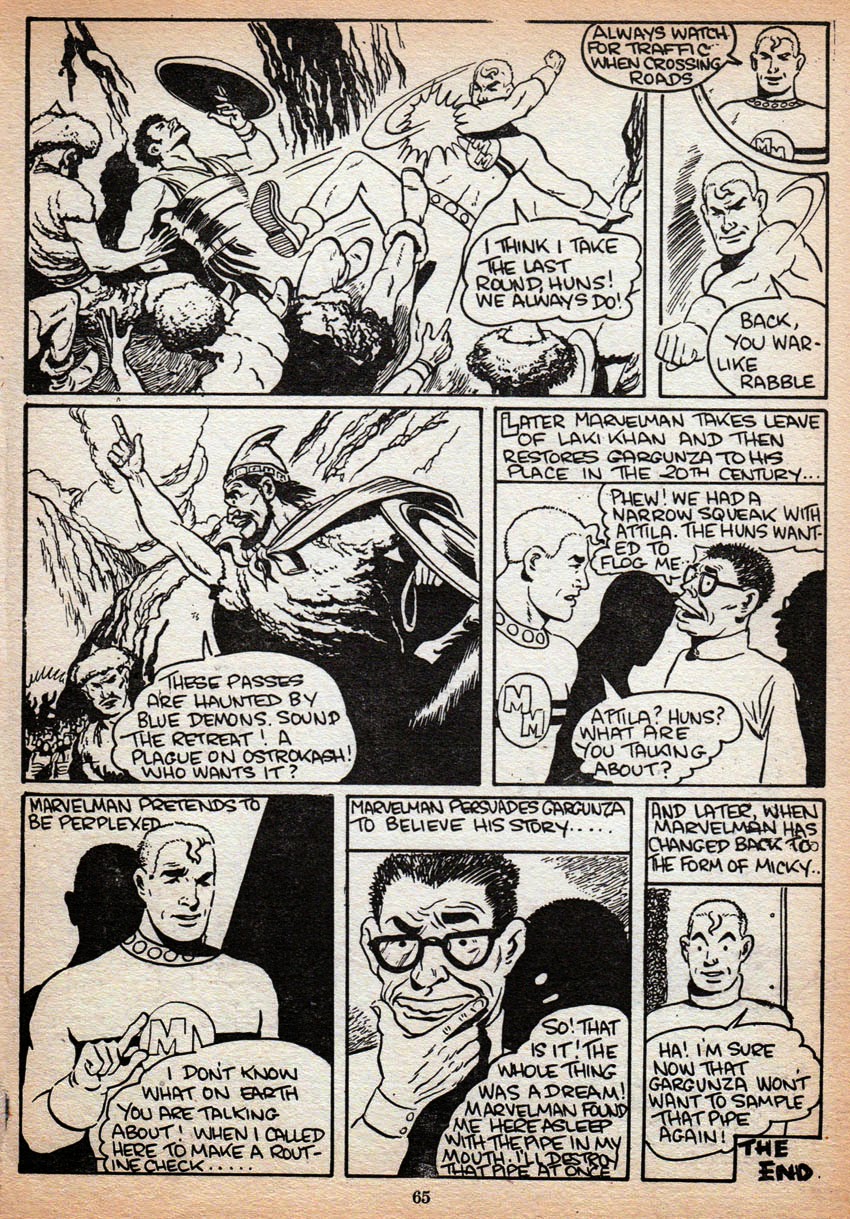 The endpapers also highlight this story, with a crazed looking Gargunza inhaling from the pipe. I can't help wondering what, if any, reactions there were at the time. Just a few short years after that ridiculous outrage over horror comics, and there's a story with children's favourite Marvelman using a hookah pipe. However, I guess if it was okay for the caterpillar in Alice in Wonderland then it was considered okay for a Marvelman Annual. It still seems strange to modern eyes though, and I doubt any such scene would appear in an annual today. 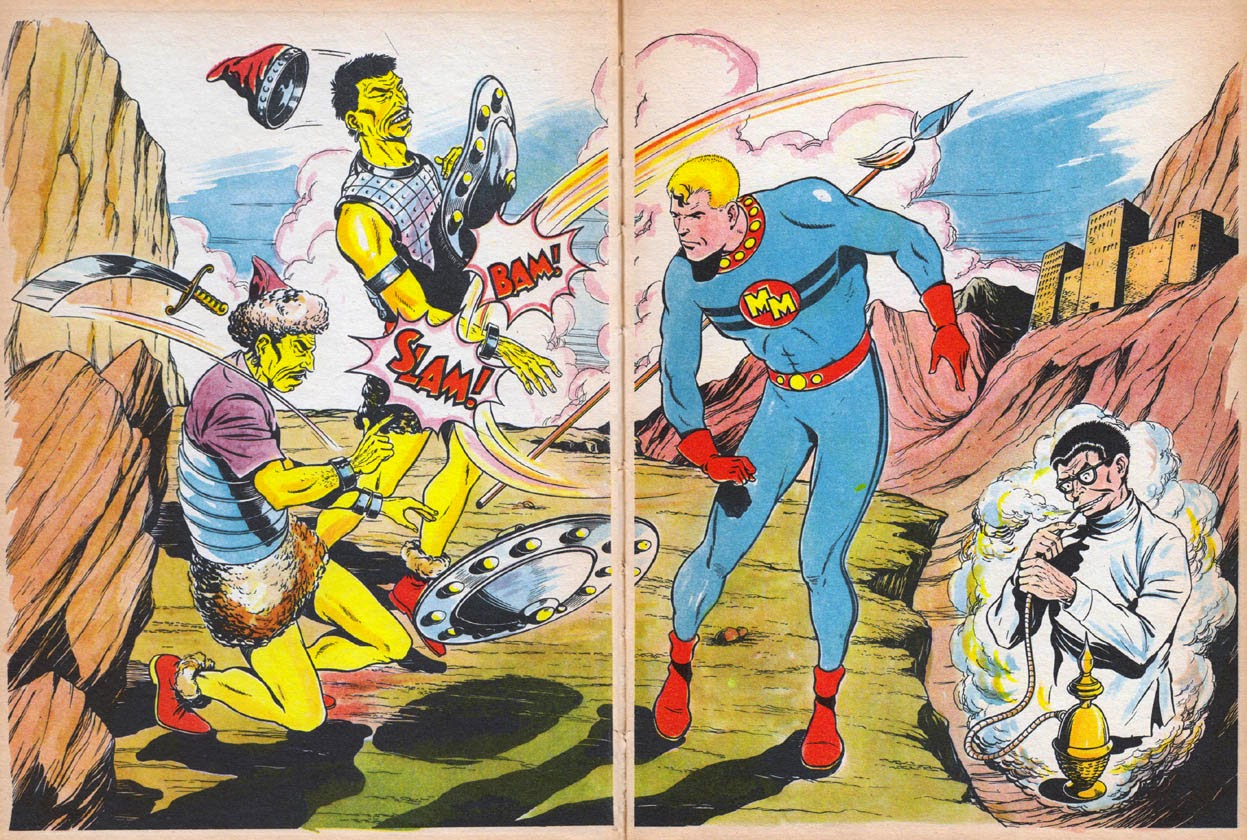 it's more a hookah then a bong of course.. a bong is much smaller..

Can't say I was ever a fan of Marvelman.. sure, the character was pretty much just designed to be a ripp-off of Captain Marvel but.. a bit more added to it to make him.. unique in someway would have gone a long way.

I think the Flip and Flip strip is the highlight of the Annual. Denis Gifford isn't really one to disappoint much.

Just goes to show how little I know about drugs. Hookah pipe then. I'll change it later when I'm on my other computer.

Manic, I've been told the pipes are pretty much the same thing so I've referenced both of them in the posting.

no problem, it's just Hookahs are bigger as a Bong, while kinda slang, is more for the smaller portable versions. the Bong was picked up by druggies cause of the small and portable size.. Hookah's are a bit big for evil nasty druggies to hide (kinda a bit bias there but... there is a difference between legal for a reason, and illegal purely to harm themselves and mostly others)

Brilliant post, Lew. Thanks for sharing. I've never seen a Marvelman annual before! I hope your Christmas was peaceful and enjoyable.

I think they're quite rare, John, and can be expensive. I was lucky to find one fairly cheaply. There were several published over the years:

Thanks for the link, Lew.

Yep, they certainly churned out a lot of that stuff.

Iv'e never even seen this art in color.
The few reprints in the back of the Marvel Comics reissues of the 80's series have all been black and white.
And if I didn't know that was Don Lawrence's art I could scarcely believe it, but in color the backgrounds absolutely have shades of early Lawrence
I know Lawrence's art best from the pages of Storm, but that was at least 20 years after Miracleman.
I have no problem believing that's Lawrence art on pipe dream though.
It's closer to the type of thing I am used to from him and the faces and body shapes are closer to his work on Storm, but less refined.
And off course then it will turn out its not Don Lawrence at all.
Course we will never see anything like this ever, anymore.
Comics are serious business these days.
All the fun is being sucked out of them. Depending on the comic, I like some of them serious, but others could and should be fun too.

Hi. I have a load of old annuals from the 50s - 60's....some Lion...Cowboys....Beano....Davy Crocket....Marvelman etc. Anyone know where I can take them to have them valued in the UK? Thank you in advance