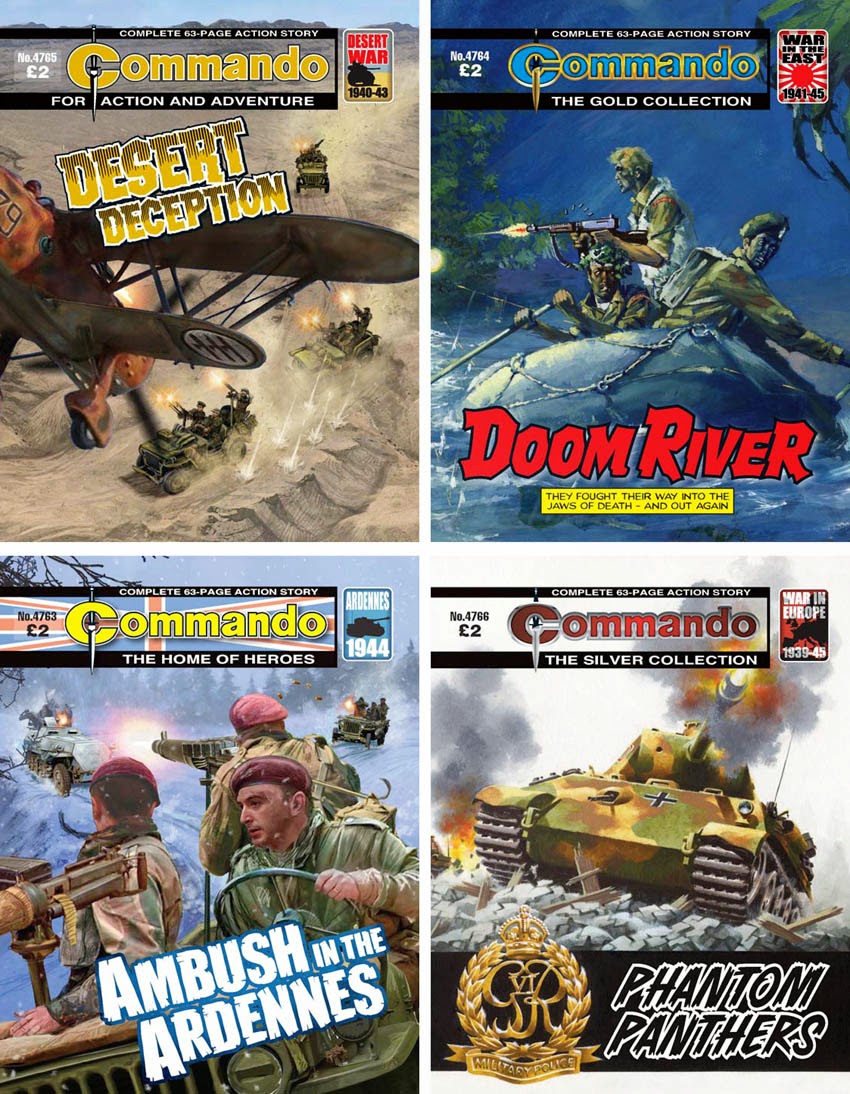 Thanks to DC Thomson for the info and cover images. Here's the latest details of the four issues of Commando that are out now! Britain's longest-running adventure comic!
Commando Issues 4763-4766 On sale 4th December 2014

Commando No 4763 – Ambush In The Ardennes
When Lieutenant Alexandre “Lex” Mertens joined a Belgian Special Forces unit late in World War II he knew he’d be in for a tough time — hit-and-run raids in heavily-armed jeeps were never going to be easy.
What he didn’t expect was to be called on to defend a village full of civilians from rampaging German forces and to have to take command of his new comrades. He didn’t know if he’d be up to the job but for the sake of the civilians and his own men, he was going to have to be.

Had they survived the landing at the deadly river-mouth, mined and ambushed by the Japanese, and fought their way through the horrors of the jungle, just to be picked off on this ridge by Japanese planes?
Was this the finish — here, when below them lay the secret Japanese airfield they’d come so many blood-stained miles to destroy?
Was it blazes!

Although every Commando story starts life as a plot line, sometimes it’s not the story that grabs your attention, sometimes it’s the cover, sometimes it’s the inside art. That is certainly the case here. Alonso’s pants-on-fire style of illustration socks you in the eye and keeps the tale racing along.
Once you get past the art, you can appreciate that it’s a well-worked, complicated plot that Alonso is working with. There’s jeopardy round every corner and enough friction between the characters to start a small fire — see the comment about Alonso’s style.
Cover artist Chaco holds his end up well, reducing the amount of colour in the illustration to show that it’s night, but also showing up the gun flashes and the probing searchlight. A good job by all three.

Tony Borelli had been born in England but his parents were full-blooded Italians so, when World War II broke out, he looked likely to be detained in an internment camp with other foreign nationals.
Tony, though, enlisted in the British Army and became part of a highly secret intelligence unit operating in the deserts of North Africa.
His CO believed Tony’s fluent Italian was an asset to the team and didn’t consider his roots important. Unfortunately, not all Tony’s comrades were as convinced that he could be trusted.

They did not exist as far as the Allies were aware — four lethal Panther tanks hidden away in a secret lair from which they would strike with devastating force when the time was right.
The British had a phantom of their own with which to hit back…though they did not know it!

Throughout Commando’s 53-year history, Military Policemen (MPs) have been used by authors as a handy plot device or character archetype. On many occasions, these Army law enforcers have been officious, bullying types, bringing trumped-up charges against our plucky, salt-of-the-earth heroes.
In Phantom Panthers — drawn by the inimitable and much-missed Denis McLoughlin — we buck the trend. MP Sergeant Bill Cuthbert is likable, brave, honest…and determined to solve a battlefield mystery. Once more, Commando can turn expectations on their heads and — as we see here — the results are all the better for it.

I love your page, and look forward to reading it everyday -- I am middle aged, and just delighted that you are making all these gems from my youth available. My daughter and I get hours of joy from your page.

I'd certainly like to see more vintage Beano, Dandy, Whizzer and Chips, Topper, and Beezer.

Thanks GW. I'll see what I can do.

Just recently downloaded the Commando app. Thought I'd give it a plug!