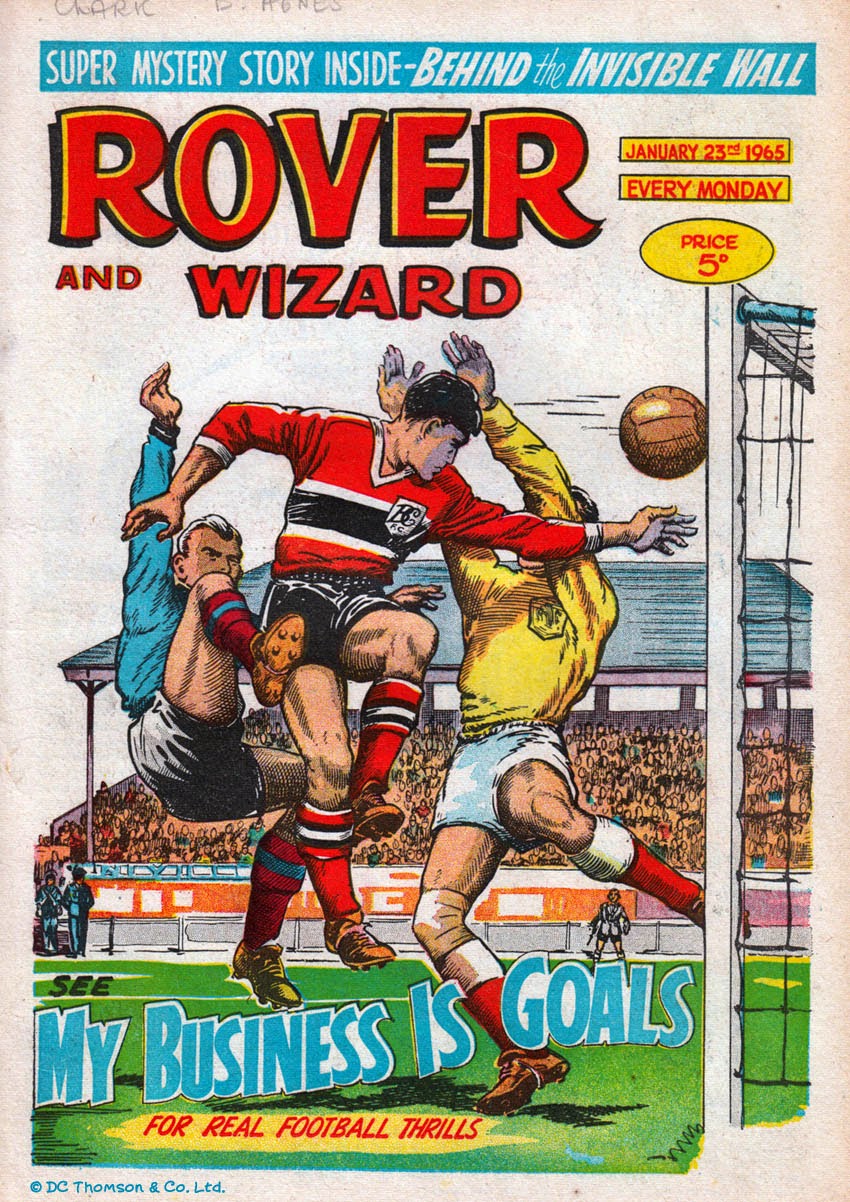 When it came to DC Thomson, although I always liked their humour comics I was never a regular buyer of their adventure comics and story papers. I preferred the ones by Odhams and Fleetway/IPC (plus City's TV21 of course) and American imports. However I've recently bought quite a few old DCT titles and I'll be showing some material from those next year. 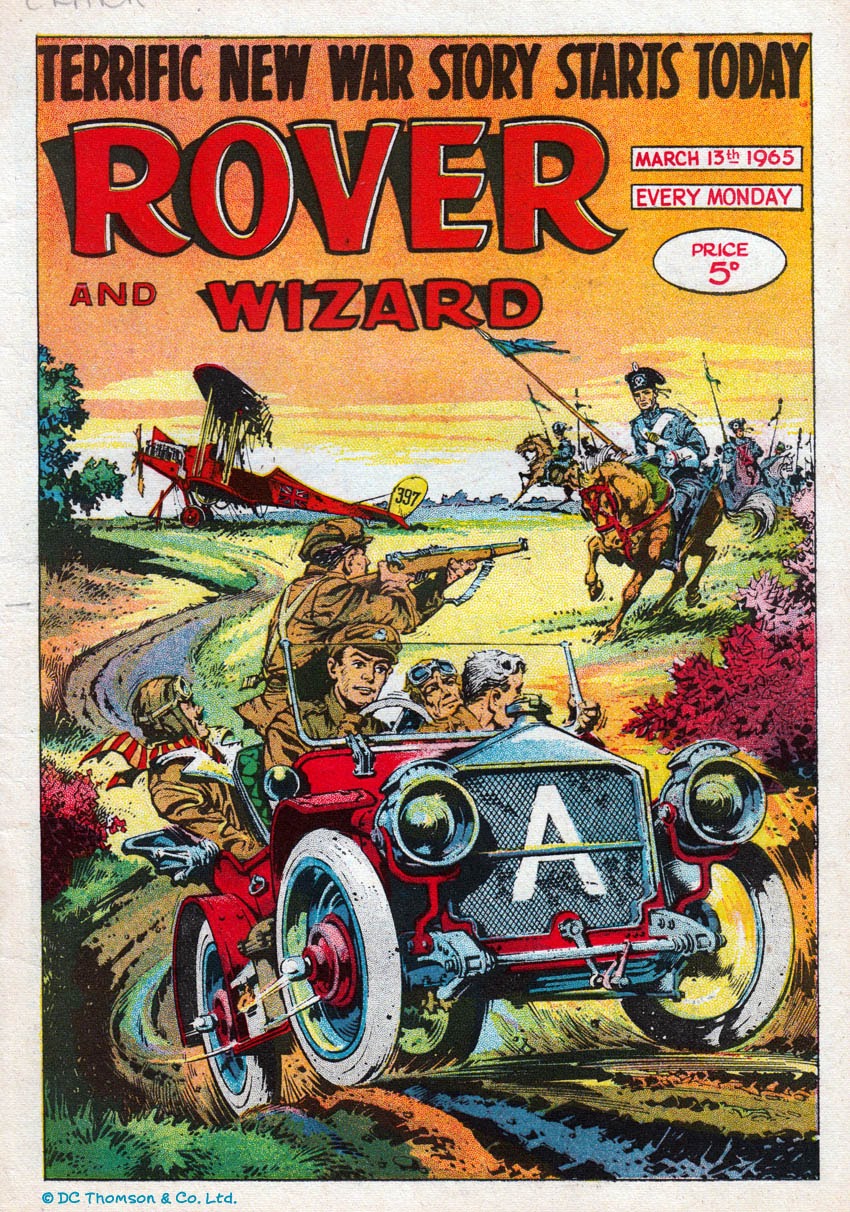 For today though, here's half a dozen covers from 1965 issues of Rover and Wizard that I bought recently. This long-running text story weekly featured some excellent covers as you can see. Superbly illustrated and designed, these eye-catching covers offered an exciting incentive for the reader to buy them. Unfortunately, as they're uncredited and as I'm not too familiar with Thomson's story papers I don't know who the artists were. Can anyone help? I'm guessing the two Lame-Duck Donovan covers might be by Ron Smith but I could be way off. Any information would be gratefully received and I'd credit you of course. 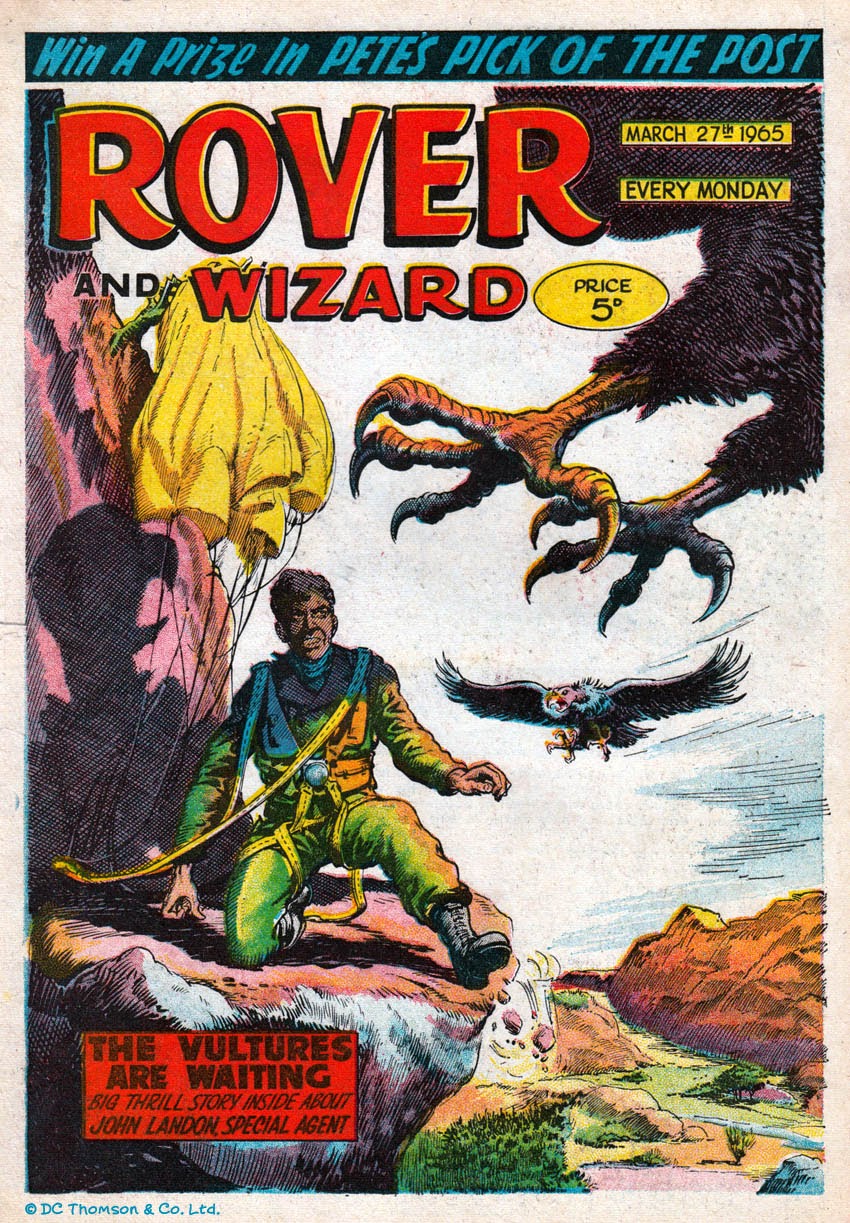 In the meantime, enjoy looking at these fine examples of an age long gone. 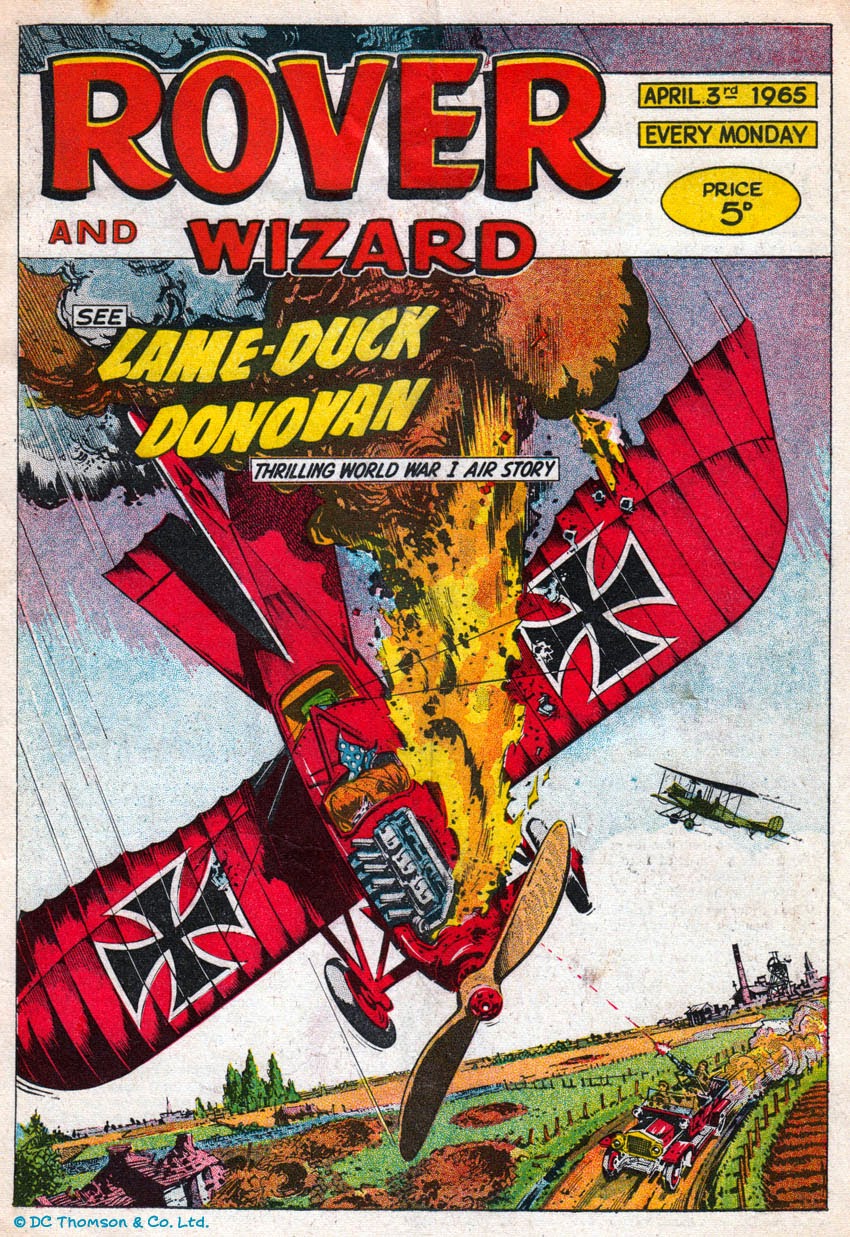 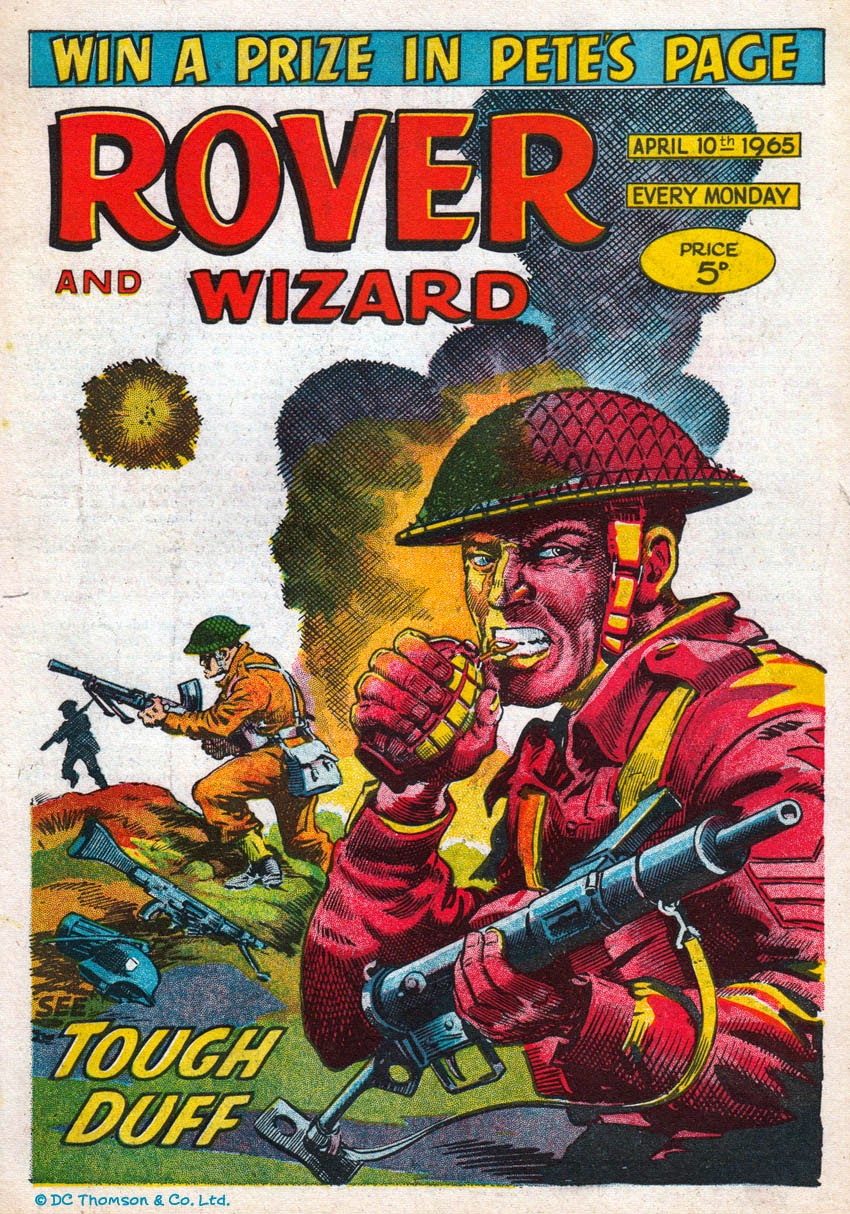 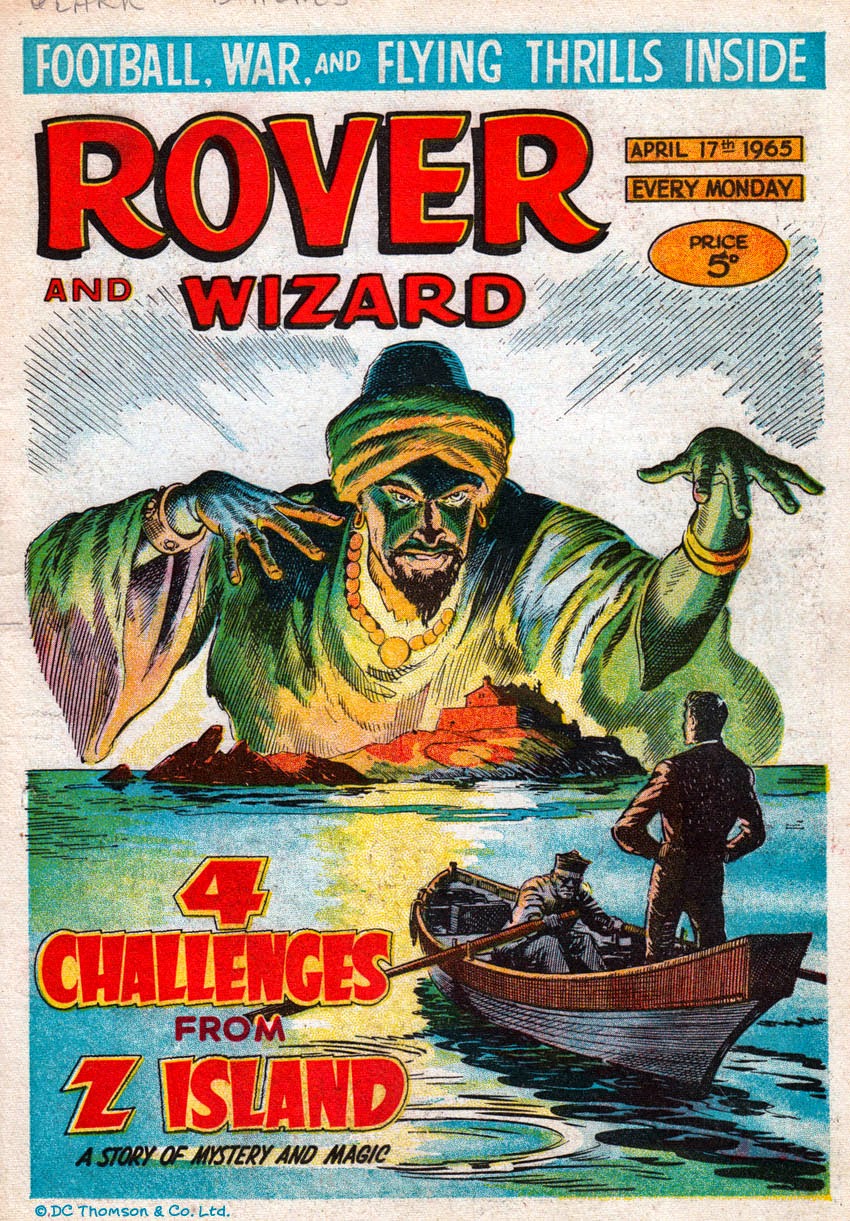 Email ThisBlogThis!Share to TwitterShare to FacebookShare to Pinterest
Labels: Rover, The Wizard

Can't tell if it's Ron Smith from that cover, but if I saw a page of the strip I should be able to recognise his work.

Rover was a story paper John. No strips, and the illo on the header inside was drawn by a different artist than on the cover.

I never had a Rover, so I thought that half of the paper may have had some strips in. I can't say that the covers scream out Ron Smith to me, but of course he would have been a lot younger then and may not yet have developed that unique " clean " style that I found instantly recognizable. The last work I saw of Ron's was in MASK.

No it was a text story paper like the original Wizard, Hotspur, Skipper, and those women's papers such as Red Letter. It had the occasional mini strip but that's it.

As I say, it might not be Ron Smith. The inking reminded me if his work but not the figures.

I am willing to put money on the April 3rd cover being a Ron Smith one. I think the March 13th one could also be Ron's work but I am only 80% sure.

The Vultures and Tough Duff covers could be Jeff Bevan, but I have not got spotting his style down to a fine art so far.

Thanks. Those suggestions seem very plausible.

I only bought them for the covers really as the compositions were so brilliant. They were very cheap (just over £2 for all six). I may get around to reading some of the stories one day. I can see why Rover ran for so long. Such a well produced publication.

Hi Lew ..I remember being given a huge pile of these by a neighbour when i was about nine or ten ...that would be around 1961...! I was at home sick and I worked my way through this great pile while snuggled up in bed. They weren't my favourite comics either , Lew but the cover artwork was always beautifully designed and emotive. The stories ...for a ten year old ..rattled along at a great pace...mostly tales of derring-do during wartime if I remember right...a great introduction to the enjoyment of the short story..

You can both clearly see something I can't in those Lame Duck covers. My hat off to you both!

It's the style of inking I'm going by, John, but I could be mistaken. It's frustrating that so few companies allowed artists to sign their work back then.

Paddykool, I think it was partly the war stories that put me off. I was never a fan of war or football strips as a child. (Although I am enjoying reading through the big pile of Scorcher comics I bought recently.) It was always the art that drew me to a comic though, and with Rover being a text story paper I just wasn't interested. I read books of course, but I didn't fancy following text serials.

well Lew ..this was a year or two before i discovered the chunky Alan class compilations like Suspense and so on and American comics .UK comics were mostly war and football. There were always the humour titles like Beano which took off in the early 1960's with some great mad strips. Then came Marvel which was like punk rock at the time and of course Boys world , wham , Smash and Pow...The artwork on the Rover comics was well drawn and designed , if a little staid compared to all those others I mentioned ....but like i say Lew , let any man try drawing any of this stuff to see how difficult it is anyway.I preferred comics t o"story papers" , of course...but when you're sick in bed , it concentrates the mind!!!As an aside there is plenty of "poster art" masquerading as "comics" out there and it is lauded by a lot of fans ...but it doesn't move or progress the story.