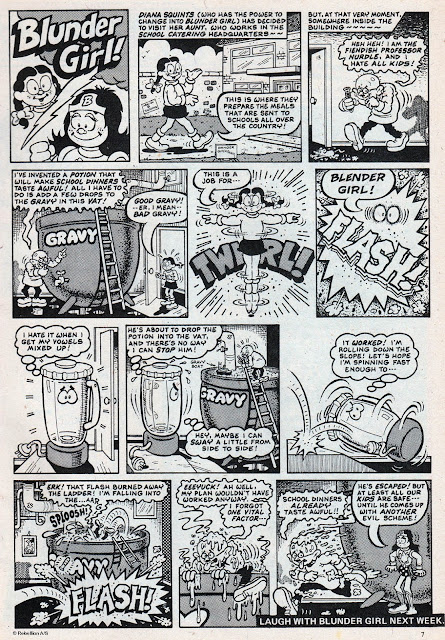 Jack Oliver (or J. Edward Oliver as he signed his strips) was an excellent comic artist. He created his own characters, and not only wrote his own very inventive scripts but lettered his pages too. You may be familiar with his Master Mind and Cliff Hanger characters for Buster, but here's one that appeared in the IPC girls' comic Penny.

At the basic level, Blunder Girl was a parody of Wonder Woman, but Jack Oliver gave us more than that, creating a funny, well crafted strip in its own right. Here are the few examples I have, from Penny Nos.6, 11, and 14 from 1979. 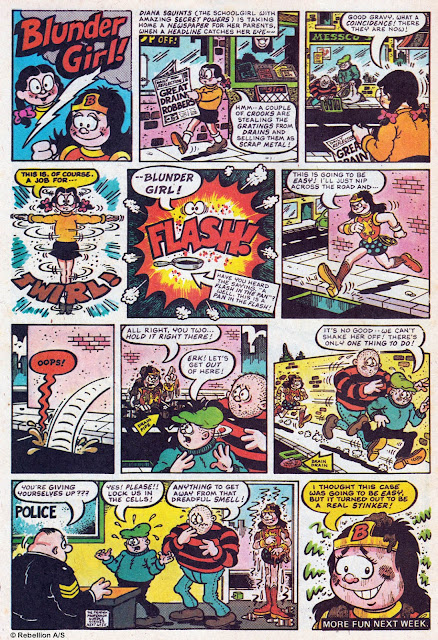 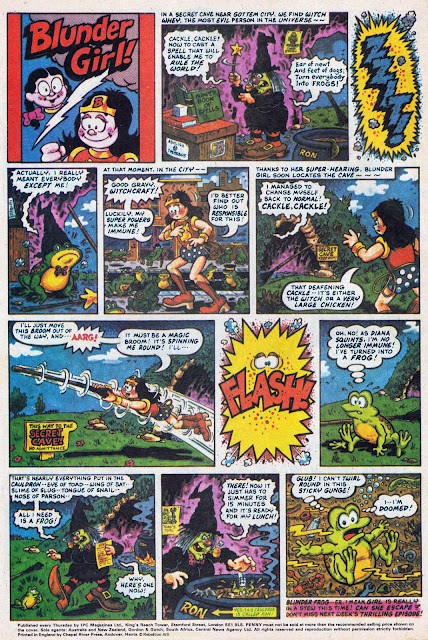 Jack Oliver's work was one of the inspirations of my own material. Master Mind was a direct influence on Brickman for example, and for years I only drew characters with three fingers and a thumb because that's how Jack drew them. I only met Jack once briefly, at the Buster offices back in the King's Reach Tower days, but I was glad I had that opportunity. He passed away in 2007 but his website is still active as a tribute to his work:
http://www.jeoliver.co.uk
Posted by Lew Stringer at 14:05

A true comic genius –- I used to love reading JEOs strip (which I think was just called "J Edward Oliver" ?) in the DISC (later “Record Mirror” ) music paper back in the 1970s. It was so different to anything else that was out there (I wasn’t aware of underground comics at that time) especially with his main character being a dinosaur called Fresco-le-Raye. He also did some nice realistic illos in this strip of famous celebrities from the era including Madeline Smith (who he drew a lot) I also seem to recall he did a strip poking fun at Spider-man but haven’t seen it in years. He was a pretty "massive" cartoonist back in the day.

I wasn’t aware the JEO was working in kids comics in the late 70s after he left the Record Mirror but I did manage to catch up on a few reprints in books like “Funny Monthly” etc – Blunder Girl look a fun read. I have to say I do see a bit of JEOs influence in your artwork.

Yes, music papers featured some good strips back then. I probably saw his Record Mirror strip as I used to have Sounds and Record Mirror every week (and NME quite often too) in the late 70s/early 80s. I never kept them though so they're long gone.

As for his children's comics strips, it'd be good if Rebellion compiled some of his strips into a book at some point, now they own the rights to those old IPC comics. Jack's work was one of the reasons I started buying Buster again in 1981 after a hiatus of five or six years.

I'm glad i met him a few times and could call him a friend.

He actually drew his work actual size!! He was very eccentric...
We both had a lot in common...
We talked for ages..

Went to his Wedding and he went to mine!!

Yes, I remember Buster editor Allen Cummings telling me that Jack drew his pages the size they were published. Very unusual, and very intricate, considering all the work he put in them. I seem to recall seeing some of his originals, so either Jack showed me in the office or we exchanged pages. If it's the latter, I'll have to have a look for them. I have a suspicion I have a Vid KId page.

My favourite comic artist. As soon as I saw the scans here I immediately went looking for the Abolish Tuesdays sign, the worm and the little box with the crank handle

Lew, what a really great post! I know so little about JEO–but what I know, I like! I had looked at his website a while back and wished that a book had been published of his strip work as it all looked tremendous. And now some examples of his kids' comics work, too! Very grateful to you for sharing these. Lovely colours, incidentally.

Great isn't it? I'll show some of his other strips soon. I think if Jack was around today he'd be self-publishing. It'd be natural for such an all-rounder as he was.

Just like Paul/McScotty, I too was a big fan of JEO in Disc & Music Echo. His humour was so different. I do wish all of his D&ME echo strips could be reprinted in a book. I fondly remember his take on Good King Wenceslas - for the lines "...brightly shone the moon that night, though the frost was cruel...", he drew Keith Moon, with his face beaming and David Frost whipping someone, both on a backdrop of a snowy night.
He also had me in stitches with his hilarious "Gone To Lunch" signs!
Yep, together with Sounds and Record Mirror, - I got them all every week, - took HOURS to read!
Happy times!

Oh joy of joys! Most of those strips are in the jeo website!
:-)