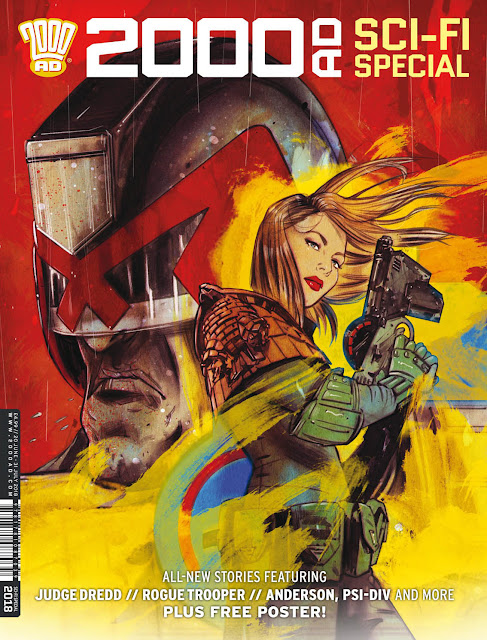 Rebellion have just revealed the cover to their 2000AD Sci-Fi Special (or Summer Special if you prefer) that will be in the shops in a few weeks. This year it's an all-woman creative team, and before any misogynists start going on about "Where are the comics that only have male contributors, eh?", - pick any of thousands published over the last 150 years and stop being daft.

Sure, there is a danger of an all-female issue being seen as just having novelty value by some. However, the publicity it will generate could bring those creators more attention perhaps than if they'd just been part of a regular edition. That's not a bad thing in a mostly male-dominated industry.

Ultimately of course, the comic will be judged on its quality, rather than on the gender of its contributors, but from the names listed I think we're in for a treat.

Here's how the special was announced on social media:

Tula Lotay's cover is the one you'll see in newsagents on June 20th, but there's also a variant cover by Emily Zeinner that you can order exclusively from the 2000AD shop:
https://shop.2000ad.com/catalogue/SPE1801 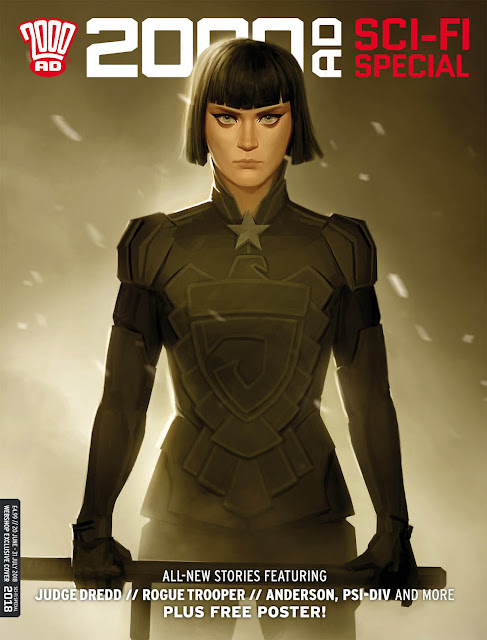 Oh thank you for the reminder! I must set a reminder to nip into Belfast on the 20th to pick this up, it's bound to shift fast! Really looking forward to this.

Ah, Milos. You do know that for years women have been writing and drawing comics aimed at boys/men don't you?

Who mentioned prose books? I said women have been working in comics for years. For one example, the artist of Roy of the Rovers throughout the 1960s was a woman, Yvonne Hutton. Various women have worked for 2000AD before this special was published, and why shouldn't they?

You need to educate yourself.

I wasn't even thinking of underground comics. I don't know why you think women should be kept away from 2000AD. It's a very peculiar point of view. It hasn't been specifically aimed at boys for decades, and even in the beginning women were involved. (You do know that the comic's original art editor, Jan Shepheard, was a woman and designed the original Judge Dredd logo, as well as many others?)

As long as the contributors produce good work, what's the problem if they're male or female? (Some strips in the special were better than others, but that's the nature of any anthology, whatever gender is producing the stories.) Rachael Stott illustrated a great cover for the weekly recently, and would be ideally suited to draw a regular strip, including Judge Dredd.

Truth is, if 2000AD hadn't credited the artists/writers, no one would be any the wiser that women had worked on it, and people like you would have enjoyed it, thinking that blokes had done the strips. Same as none of the hundreds of thousands of Tiger readers in the 1960s/70s never knew that a woman was drawing the comic's most popular strip.

As I said, educate yourself.

And there we have it. If your previous comments weren't evidence enough, anyone who uses phrases like "cucks" is nothing but a small-minded misogynist. Off you trot, pal.

The modern comics industry has been vastly improved by more women working in business. You can pretend comics are "created exclusively by men and exclusively for men" all you like if it helps you sleep better at nights but the reality is totally different. You ignored the two examples I gave you (Yvonne Hutton and Jan Shepheard) who were working on boys' comics in the 1960s/70s , and there have been many more over the decades. Even more so today.

A good comic is a good comic, irrespective of gender. I'd say that anyone who gets irate about women in comics is a Victorian throwback, but even the UK's first comics character, Ally Sloper, was co-created by a woman, Marie Duval.

OK, last chance. Let's get back to basics: what exactly is your problem with women working on 2000AD?

HA! Typical. The question was rhetorical anyway because it's evident what your problem is; you just don't like women intruding on what you see as male territory. And now you've removed all your earlier comments because you know your opinions are based on some misogynist problem rather than anything rational. Bye, bye Milos. Don't hurry back.

Whatever. It's only your opinion. Which, Btw, doesn't surprise me.

I deleted comments because I see where it ends. And I plan to chat all day.

See, this is where your argument collapses. I gave you facts, you claim they're opinions. The reason you do that is opinions are ALL you have and you have no other comeback.

Fact: women have worked in comics aimed at boys/men for a very long time. You just didn't know it, and now that you do, you can't get your head around it so you claim it's only an opinion. You're a misogynist idiot and no more of your comments will be published here.

Milos, you are obviously an idiot. Women have no place in a ‘boys’ publication. You do know that women read it too, surely? That’s like saying you have to stop reading Hello magazine because you are a ‘man’ and we all know that isn’t happening anytime soon :)

I know that only bitches with testosterone, who probably are too dumb to realize that.

And the men who read them are whiny soyboys, but we all know that Hello, and better, romance books have very very little of males who read them.

Exactly, Marc. People like Milos amuse me because they seem to think that women intruding on what they see as male territory is somehow a threat to their masculinity. Must make life very difficult for them, and all for no good reason!

I hope you are man enough to clean up my posts, but I knew you are sjw cuck.

The fact he's deleting his comments says it all really. What a sexist, misogynist dinosaur, as the wonderful female M, Judi Dench said to Bond. Milos, I'm sure you're probably still reading these to see what people are saying about you, so I'll just add this. More equality for others doesn't mean less equality for you. It's not a pie.

Yeah, he's still reading the blog, Phil. He keeps sending me comments (which I'm not going to publish). He's gone full-on right-wing misogynist now, calling me a "sjw cuck". I shall wear it as a badge of honour. Ha!

It does make me curious as to why such people are so afraid of women working in what THEY see as male territory. From their attitude, I don't think they have any women friends or they wouldn't behave like that. It's the fear of the unknown... 'cos they don't know any women. I pity anyone like that and the friendships they miss out on.

Completely agree with you there, Lew. Plus, isn't it quite pathetic that the likes of this person think calling people "SJW" is an insult? As if fighting for justice for all would be a bad thing haha! Well, it is for people like that I suppose, who want to be seen as superior to others rather than see them as equals, which ironically is the exact opposite of what their actions and words end up doing.

Life must be very frustrating for them, but they bring it on themselves.