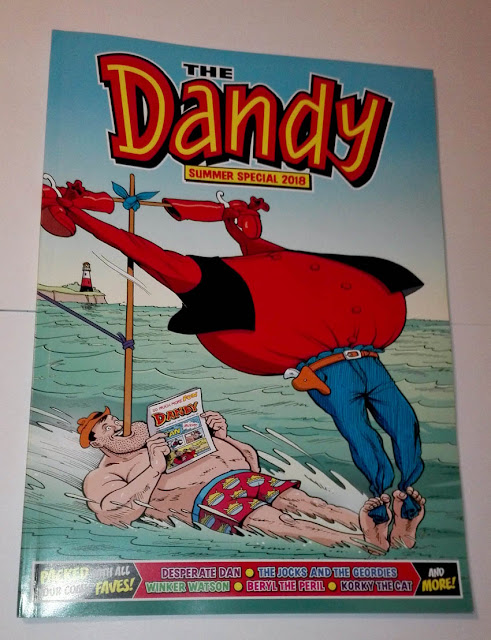 I always associate Summer Specials with Blackpool, as that's where my parents used to treat me to them when I was a child. It was, therefore, a pleasant surprise to find this year's Dandy Summer Special had been published a few days early when I was up in Blackpool last Monday. Naturally, I didn't hesitate to buy it, although the £6.99 cover price is significantly higher than the 1/6d (7 and a half pence) it used to cost 50 years ago. 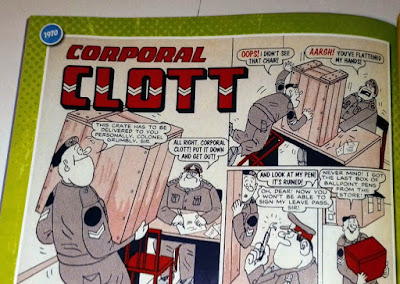 These days, the format of the D.C. Thomson Summer Specials is a 68 page A4 sized 'bookazine' with card covers, so twice as thick as the old specials, albeit smaller in dimensions. Apart from the excellent cover by Ken Harrison, the contents are entirely reprint. Good quality reprints though, with classic artwork from Dudley Watkins, Charlie Grigg, Eric Roberts, Bill Holroyd, Robert Nixon, Steve Bright, and more. 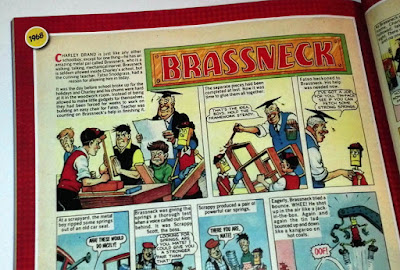 Most of the reprints are from old Dandy Summer Specials and Annuals, with a handful of weekly pages too. Unfortunately, a few of them have been stretched vertically slightly to suit the A4 proportions. It's distracting, unnecessary, and makes the characters look wonky. (The worst affected being a Terry Bave Winker Watson strip with a round sun turned into an ellipse!)  Other than that, this is indeed a special collection. I was pleased to see it includes a Desperate Dan story about an aquarium that was one of my favourites from the 1968 special. Genuinely funny stuff and worth the price of the comic in itself.

The Special contains a nice range of stories from 1968 up to 2006, with a generous helping of 1960s/70s strips. Instead of having the usual mixture of characters, this year they've focused on just seven, with several examples of each. The stories are Desperate Dan, The Jocks and The Geordies, Korky the Cat, Beryl the Peril, Corporal Clott, Winker Watson, and Brassneck. 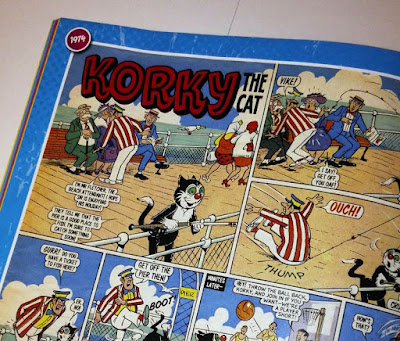 If you're a fan of classic British humour comics, or you want a satisfying summer comic, The Dandy Summer Special 2018 is for you. Now on sale in branches of WH Smith, and hopefully, other shops too!

Went to WHSmith today, picked up the newspapers and this week's Beano. No sign of the specials. Was about to head to the tills when I saw a member of staff with them in her arms - they were just putting them out! So I picked up the Dandy Summer Special (I'd already bought the Beano one) as well - couldn't have timed that better. And yeah, it was a good read, almost all of it material I hadn't read before. I liked the Keyhole Kate clues too, that introduced each feature.

I haven't looked in my local WH Smith yet but last year they hadn't bothered putting them out until I asked about them. The Blackpool branch had just five copies. Three were left by Wednesday when I left. The sad thing is, they won't order more when they sell out. Same goes for The Beano. Blackpool WHS had three or four copies on Wednesday morning. All had sold by mid-afternoon. That suggests they could sell more, so that's a whole week of lost potential sales.

My local WHS only put the Beano ones out this week, so don't know when this one will turn up. Mind, it's an odd branch; they still had both of last year's summer specials out at Christmas, as well as the actual Christmas special.

The resizing will probably annoy the hell out of me, but I'll still be buying it. Direct from DCT if WHS doesn't have it out next week.

I will check my local branch tomorrow.

I got my copy on Thursday... and they only had two copies! I felt the price was a little steep though : the week before I got the Solo Movie Guide for £8 in Asda, a difference of only £1.01 for a full-size hardback book. And The Dandy Annual will probably only a pound more than the special.

It wasn't open so will check during the week.

It's partly about convincing shops to stock it, Kevin, and a higher price means a higher profit for retailers, so more incentive for them to put it on the shelves. Plus the print run will be lower than that Solo Movie Guide, so the unit costs will be higher.