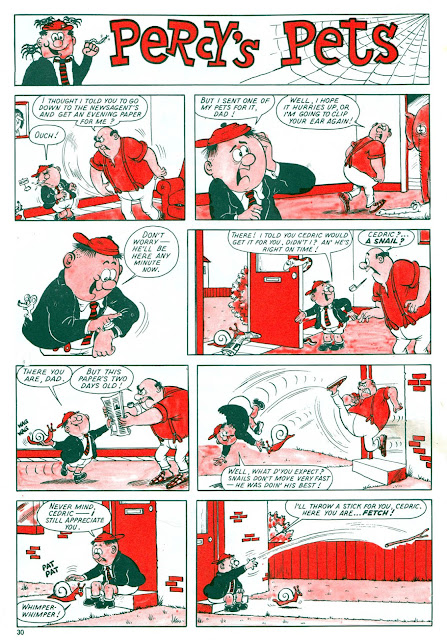 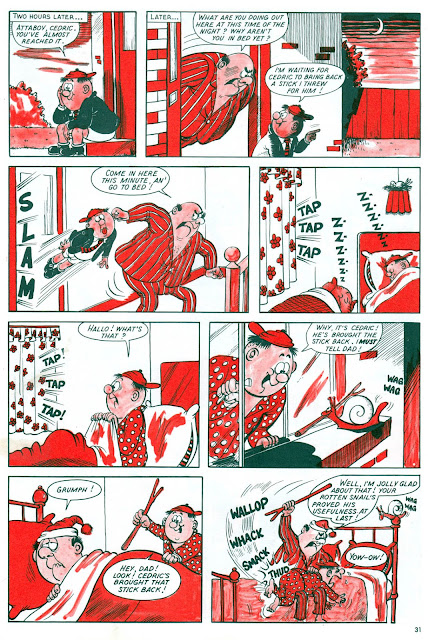 This episode of Percy's Pets is from Smash! Annual 1968, writer unknown (possibly Les Lilley?), and drawn by Stan McMurtry. The opening panel is vicious enough, with poor Percy being clouted so hard by his dad that his chewing gum flies out of his mouth, but the child cruelty continues throughout the story.

Smacking a naughty child is bad enough, but Percy doesn't do anything to deserve such violent treatment. The whole story revolves around how funny it apparently is for good-natured Percy to be beaten by his bad-tempered dad.

Much as I love the Odhams comics of the 1960s, they could often be irresponsible in their comedy-violence. It can be argued that they were so over the top that the violence is on the level of a Punch and Judy Show and not to be taken seriously. I'd usually agree with that, and the way that Ken Reid handled such material, for example, was genuinely funny. This one, I'm not so sure about.

As a child, I'd find stories like this amusing, and surely that's the important thing? After all, the story is aimed at kids. To put it in context, 50 years ago, shamefully enough, it was commonplace for parents to smack their kids, so scenes like this wouldn't seem unusual then. As an adult, I find it somewhat disturbing and I'm glad comics don't feature parents belting their kids now. (Although Biffa Bacon spoofs this perfectly in adult comic Viz.) What's your opinion? Post a comment below...

This subject has been ongoing in various ways
since at least the 1950 s in the USA if you consider Wertham and his work to clean up comics under the general issue of " too much sex and violence " affects kids. I am of the opinion it does. That being said I laughed hard at Dennis the Menace getting the slipper in the 1960s and I showed the Annuals to my little kids in the 2000s and they laughed and laughed and actually wanted to be spanked with the slipper when I wore them. So, I guess there can be funny violence and no rule will suffice for every comedic situation. I do hope there are no parents beating their children though!

We had an anti-comics crusade in the 1950s here too. Personally I don't think violent comics damage children, unless they've already been affected by other things in their environment. As for sex scenes, they don't appear in children's comics thankfully, so it's up to parents to make sure their kids don't get access to adult comics.

In the case of this Percy's Pets strip though, I just find it unpleasant, rather than damaging. It's a sad reflection of how parental violence towards kids was treated so casually back then. Thankfully, things have changed for the better, both in reality and in the comics.

very bleak Dad...the elephant sleeping in his room was cute...

I think you're misreading Percy's role in the story. He does nothing to deserve punishment? Yes - he doesn't fetch the newspaper that his dad asked for but sends an unsuitable pet, he doesn't go to bed when he should, if he's been playing fetch with Cedric the snail for two hours then he probably hasn't done his school homework... can I count that he doesn't stay in bed? If I was the dad I'd be looking up the recipe for garlic butter. (Garlic; butter. Not difficult. Watch out, Cedric.)

It's not clear where Percy's mum is, her side of the bed is empty. If the crocodile ate her then I really would consider laying down the law about all these pets.

I sincerely hope you're not being serious. Percy does nothing to warrant violent punishment, and his intentions were good.

I was born in the mid 80s, so I'm really a 90s Beano reader when they had probably phased out the slipper in the main comic but I'm sure I remember reading it in some of the Dennis reprint annuals. Anyway I remember getting a board game one Christmas which was an official Dennis themed one where the players had to go round the board escaping a big plastic slipper! Whilst it's absolutely right that the imaginary is gone from the modern day comics, I find it funny they were still selling a game based on the slipper as recently as the 90s!

I can't remember exactly when corporal punishment vanished from comics but I've thankfully never been asked to draw it in my strips over the last 35 years. I probably did have Tom Thug's dad chasing or threatening to beat him up a few times, over some bullying idea of Tom's that had backfired, but I'd have to check to make sure of that. I could be wrong.

At the risk of continuing to misunderstand each other, I don't stand up for physical chastisement of children but I've never had to do a supermarket shop with one, as far as I can recall. So I won't judge this Dad until I walk a mile in his slippers. Percy's intentions aren't quite good since he was given a task to do in the first place and didn't do it, and his decisions display no forethought whatsoever. And the house stinks.

Dad can turn his head all the way round like in "The Exorcist", did you notice? Although that wasn't out yet, so, not a deliberate reference.

I don't think that's any excuse for beating him, though. I find it rather sad that this nice boy ( who clearly wanted to please his dad) gets treated like dirt by his dad. I don't think I've' ever seen a comic with such a awful father!