A gathering of GOOFS! 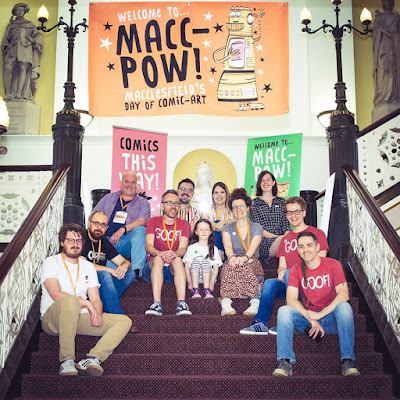 It was a case of "Avengers Assemble!" or rather, "Goofers Gather!" at Macc-Pow! on Saturday 23rd June when the new digital monthly comic Goof! was launched at the event.


Goof! features 30 pages of all-new humour strips for kids, including the return of my Derek the Troll character in a new adventure! - and it'll only cost you £12 for an annual 12 issue sub! Bargain!

Who sez there aren't any new British comics any more? Who sez comics are too expensive? Look beyond the few titles available in newsagents and seek out Goof! today!
https://www.goofcomic.co.uk/about 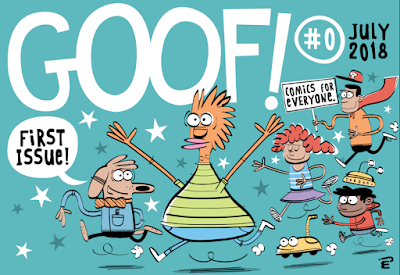 You can read Phil Boyce's fair and balanced review of Goof! No.0 here:
http://the-oink-blog.blogspot.com/2018/07/goof-0-aaannnddd-were-off.html

If you have any questions or thoughts about Goof!, ask below and I'll do my best to answer them.

Email ThisBlogThis!Share to TwitterShare to FacebookShare to Pinterest
Labels: Goof

I really enjoyed the first issue of Goof. I thought the landscape orientation choice was an interesting one. I can see that it lends itself well to display on a monitor, though I suspect a lot of us will read goof on a tablet. The downside to the landscape choice seems to be that every strip is effectively a "half page" strip. I know you're not a fan of decompressed story telling Lew, but I suspect even you would prefer a whole page. Do you know if there are plans for full page stories, or is the half page format expected to be the norm?
Also, I liked the editors page at the start. It helps tie the publication together as a whole despite the wide range of styles. I was wondering however if there were plans for a "readers letters" style page too? I've always felt those add a sense of community to a comic.
Looking forward to the next issue!

I suspected the horizontal format would make it look like they were half pagers. Actually, even if it was vertical, we'd still be doing 7 or 8 panels a page, so you're not getting any less.

I think it's just the opposite of decompressed storytelling. If anything, the pacing is very fast in most of the strips, to pack it into one page. A decompressed comic would take 20 pages to reach the same points we end on.

I believe there are plans for a letters page if enough people write in! Send your missive to the contact address.

I've just had it confirmed by the editor that there will indeed be a letters page added soon.

Not being funny but this blogs having far too many posts about you these days. Can we stick to postings about old comics please? Leave ego's out of it.

This is a post about a brand new UK comic and I happen to work for it, along with many others. It's newsworthy. Would you rather I ignored it? Blimey! is about comics past AND present. It's nothing to do with ego.

Have subbed and quite enjoyed issue 0. There were a few strips that didn't hit the mark for me, but that's an anthology comic for you. Most strips were good, some were excellent, none were egregiously dreadful. Everyone involved should feel proud.

One suggestion I have is to make issue 0 available on its own for a quid. £12 isn't exactly breaking the bank, but might put off punters who feel it risky to subscribe sight unseen.

No ego? Practically every post is about yourself. 35 years in comics. Who celebrates their 35th? Wait until your 40 and celebrate that.

You can celebrate both, you know. Anyway, I might not be around in five years. Live for the moment, that's what I say.

Lew, how dare you mention yourself on your own blog, that you single handedly created, maintain and set the agenda on...!

Keep fighting the good fight Lew. I always thought after 25, celebrating every five years as a milestone was almost compulsory. Shame not everyone can see the joy in the world though.

Thanks, Chris. There are some funny people about!