Cover preview: Doctor Who Magazine No.528 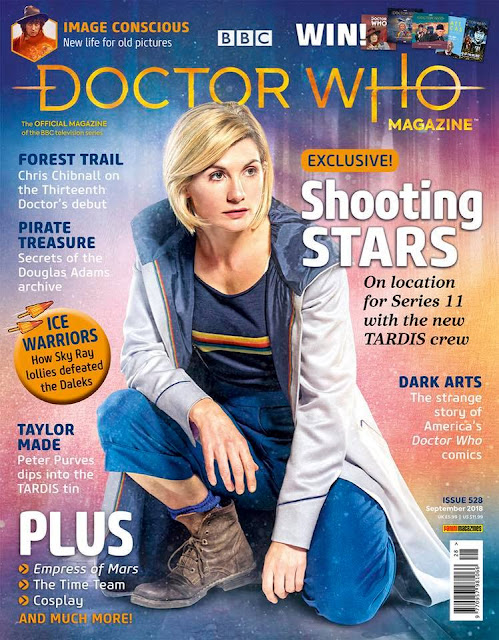 Panini UK have just released the cover to the official Doctor Who Magazine No.528, which goes on sale on Thursday 26th July. With an exclusive cover image of Jodie Whittaker the 13th Doctor, the 84 page mag is packed with features, interviews, news and reviews.

Plus there's a topical new Daft Dimension strip from me. Here's a sneak preview... 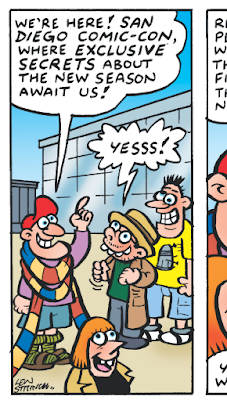 Interest in the new season of Doctor Who is building up as it prepares to arrive on our screens in October. Don't miss out on this issue!

Email ThisBlogThis!Share to TwitterShare to FacebookShare to Pinterest
Labels: Doctor Who Magazine

I predict that by Christmas everybody will be wondering why there was such a controversy about a woman Doctor.

I'm wondering now, Colin. :) I think you're right, though. There'll still be a few misogynists hating the idea, and they'll be watching the viewing figures like a hawk for any fluctuation to crow "I told you so" but viewing figures always go up and down. I'm really intrigued by the new direction, and I'd say that even if I wasn't working for the official mag.

From the brief preview on the iPlayer, it's far, far worse than the Doctor being female. She's ... *gasp* *choke* ... Northern.
It'll be all sonic black pudding and "It's bigger on the inside to cheat Thatcher's poll tax". Bradley Whatsisface won't be able to understand a word she's saying.

Here's a question for Who fans: how many offspring has the Doctor? Three?
No need for maternity leave.

The 9th Doctor had a Northern accent, and the 7th and 12th Doctors had a Scottish accent, so Jodie's Yorkshire accent is the least radical thing about it really, Mike. I think it's great!

It'll be Last of the Summer Wine meets Last of the Time Lords. Missy in wrinkled stockings. Less "Reverse the polarity" and more "Are thee mashed reet?".

Tenant understood this. That's why he suppressed his accent.
McCoy nobody watched. Capaldi was Capaldi.
Ecclestone mancunian? Not even with sunglasses, a parka and references to "our kid".

Eccleston (not stone) not only played it with a Northern accent but even referenced it in the show. ("Every planet has a North"). It did no harm to the series at all. I don't see the problem.