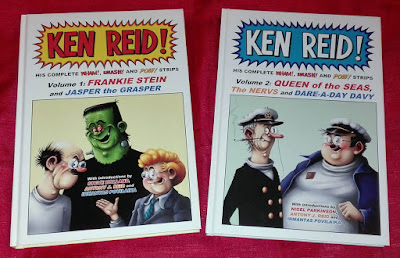 Now this is how to do a strip collection. You'll already be aware from previous posts that Irmantas Povilaika in Lithuania has gained permission to reprint the strips that Ken Reid did for Odhams in the 1960s. After a very successful Crowdfunding campaign, the books have been published... and they're even better than expected. 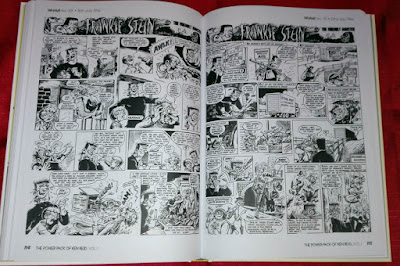 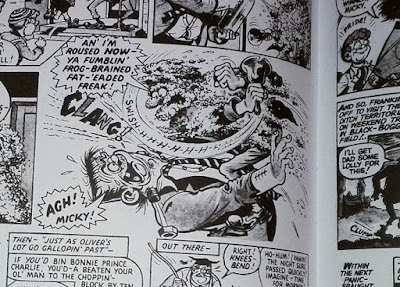 The strips are divided over two chunky hardbacks; Volume 1 reprints Frankie Stein and Jasper the Grasper, and Volume 2 reprints Queen of the Seas, Dare-A-Day Davy, and the 23 episodes of The Nervs that Ken drew. The strips he did for the annuals are also included, in colour. Each book also contains detailed biographical information on Ken and his work, accompanied by never-before-seen sketches and artwork from Ken's files (thanks to Ken's son, Antony). 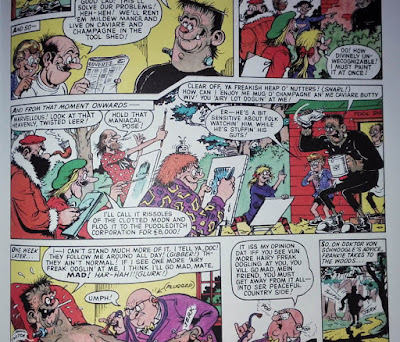 Although scanned from 50 year old comics, the reproduction is crystal clear and as perfect as can be imagined, with even the finest detail intact. The paper stock is sturdy, and is matt, which looks and feels far better and more substantial than the glossy stock that publishers often use today. 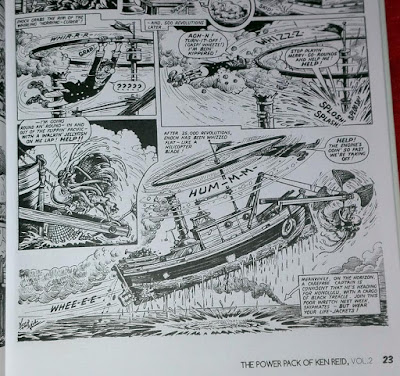 The two books reprint all of Ken Reid's published strips for the Odhams comics, plus a lovely bonus of the 'banned' Dare-A-Day Davy strip that involved Davy kissing the skeleton of a corpse he'd dug up. (Even the very liberal-minded Odhams editors felt this was too much.) You may have seen a photocopy of that before, but here, the reproduction is excellent. 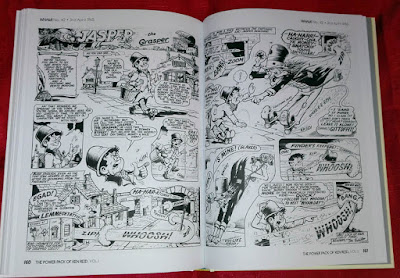 Ken Reid was unique. Oh, there have been some who have tried to emulate his style a little, and many of us have incorporated tiny quirks of his artwork into ours, but no one has even come close to matching his talent for manic comedy-horror. And who inspired Ken? You can see a little bit of Basil Reynolds in there, and a bit of Basil Wolverton perhaps, and no doubt some influence from Disney's Snow White animated movie, but Ken's style was distinctly his own. He was always one of the best in the business, and these strips represent him at his peak and most unihibited (and therefore at his funniest). 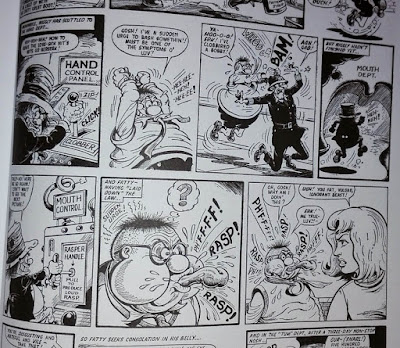 The strips that Ken didn't draw, such as fill-ins by other artists, or the long run of The Nervs by Graham Allen before Ken took over, aren't included, - and rightly so. This is a celebration of Ken Reid after all, and shouldn't be diluted. 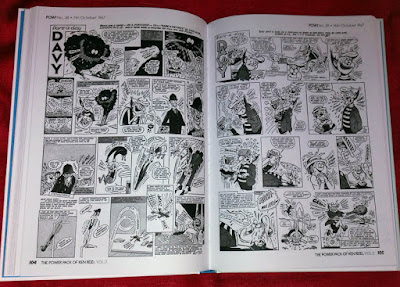 People who backed the crowdfunding campaign will also receive prints scanned from some of Ken's original art. These are on a glossy card stock and, again, reproduction is top class. 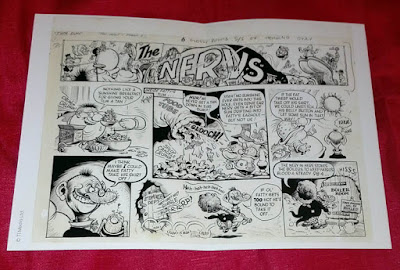 Quite simply, these strips are the funniest and best illustrated humour strips of the 1960s... and arguably of any decade. These books are limited, so don't miss out!
https://www.kazoop-comics-shop.com

..a few of Ken's early Frankie Steins were one and a half pages in length - how is the spare half a page being filled, if at all?

The spaces are filled with greyline blow ups of selected panels. It's very well done.

By which I mean the page and half appears as it was, then the space is filled with a close up from another strip, subtly printed in grey. It works very well.

I thought the adverts and other stuff that originally appeared on those half-pages weren't suitable for reprinting. The rights holder also didn't want them included, so the choice was between empty space and finding something to fill it with. I am glad I came up with the idea of those blow ups in grey, they do look nice, I think, and I am happy you say it works well :) A few Dare-A-Day Davy sets in Pow! were also half-pagers, by the way, and they are filled in the same manner in Vol 2.

many thanks! Will probably get the Frankie one!

Yes, it would have meant more work for you, Irmantas, to gain permission from Walls etc to reprint those ads (and possibly more expense). They'd be an unnecessary distraction in books like these. You made the right choice.

Both books are worth getting, Nutty, but it's your choice of course. It's hard to choose which is Ken's best work out of his Odhams strips. They're all brilliant!

I find it interesting that judging from the results of my IndieGoGo campaign so far, Vol 1 appears to be more popular than Vol 2 among the people who backed individual books. That's despite the fact that Queen of the Seas is considered to be a classic, and Dare-A-Day Davy and The Nervs represent Ken at his very untamed best that has never been equaled before or since.

Perhaps it comes down the the familiarity of the character? People who missed Wham still know Frankie from the later Robert Nixon series and want to see his earlier adventures, whereas the other characters were never revived. (Well, Davy was revived as 'Challenge Charlie' in Valiant, drawn by Frank McDiarmid, but he was never as popular as Frankie.)

I thought so too. This also applies to Jasper the Grasper who was revived in Cor!! in the '70s.

Jasper the grasper was one of my favs as a kid from the cor annuals as never owned the comic as was too young lol but own loads now and frankie stein was my fav character in whoopee,so i think it is more of a case that people know frankie and jasper more.

Yes, I think you're right, Brian.

Hey, Mr Archivist, help me out, please?
As one of the mutton heads that got the art prints shipped separately, whence can I get the A3 bag & board I need to finish the job properly?

I was amazed recently to find this in Fatbottom in Barcelona - and even more amazed to find it published by a Lithuanian imprint.