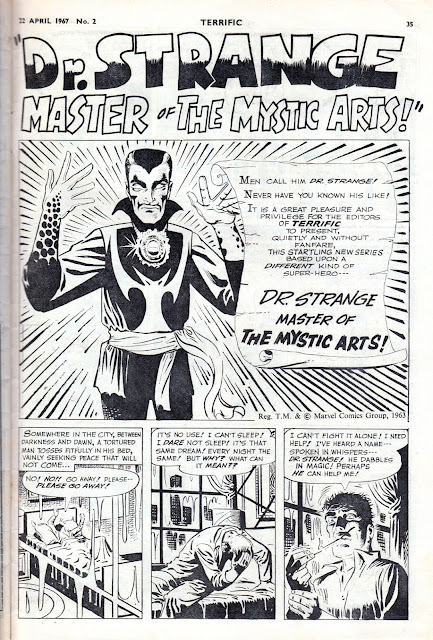 The comics industry was saddened last night to hear the news that Steve Ditko had passed away. His body was found in his Manhattan apartment on 29th June, and he's thought to have passed away a few days earlier. A sad end for the co-creator of Spider-Man, yet he lived his life as he wanted to, avoiding the public gaze and minding his own business.

The first imagery of Steve Ditko's I saw as a child was when Odhams' Smash! weekly began reprinting The Hulk stories in 1966. They began with reprinting Hulk No.2, and that powerful image of the Hulk emerging from the swamp burnt itself into my brain forever. The art was actually by Jack Kirby, but it was Steve Ditko's inks that dominated the images, in a positive way. 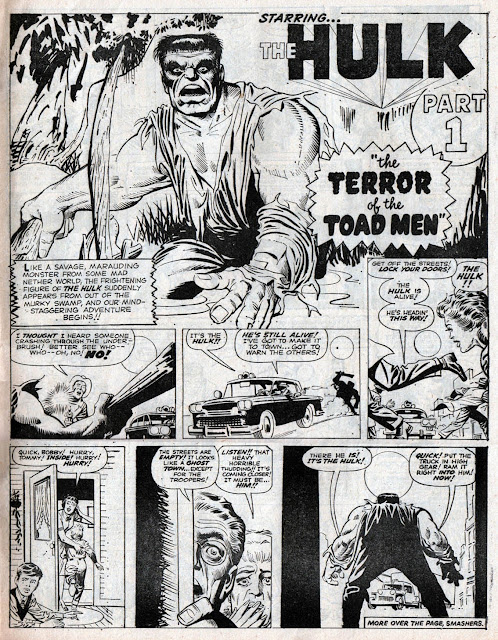 Odhams later went on to reprint Spider-Man in the pages of Pow! in 1967, with Steve Ditko on art, co-creating the character with Stan Lee's scripts, producing arguably the most popular superhero in the world. 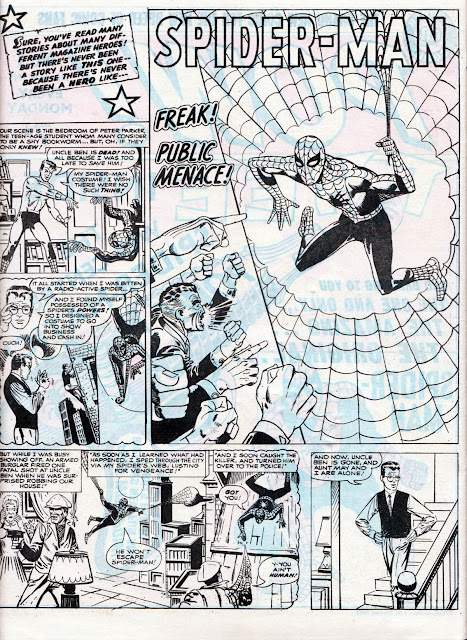 It was Doctor Strange that enthralled me the most though. Another Lee-Ditko co-creation, Odhams reprinted the strips in Terrific weekly in 1967. Comic readers had never seen anything like this before, with the stories taking us on unexpected journeys to nightmare realms and other dimensions, expertly realised by Ditko's unique artwork. This sequence from the first Dr.Strange story, where Strange says he will enter a dream amazed my 8 year old self and still leaves an impression today.

The British reprints were in black and white, but we didn't mind. All the better to see Ditko's stunning designs in a way without being distracted by colour. 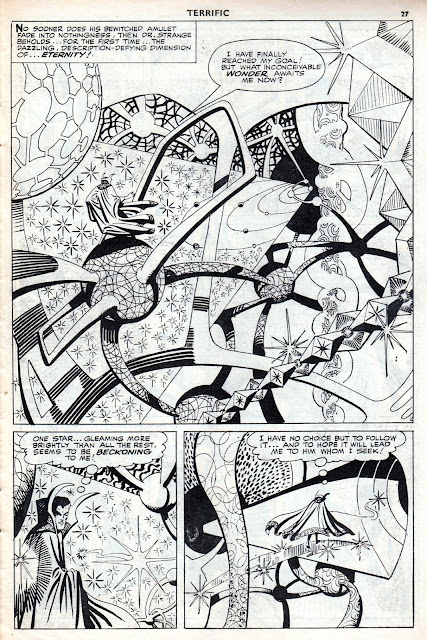 Steve Ditko's run on Doctor Strange concluded with an astonishing battle between Dormammu and Eternity, - pretty much Marvel's equivalent of Satan vs God at that time. Was it any wonder I wasn't impressed by the likes of Victor and Hornet comics when such wonders as these lay in the pages of Terrific? 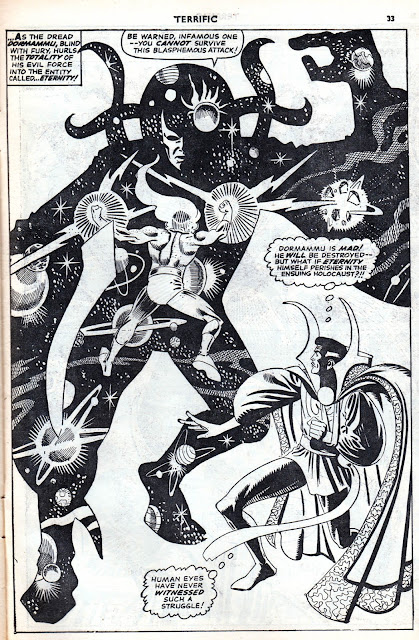 Over the years I've discovered Ditko's earlier works, through reprints of his 1950s horror/mystery stories and they're moody and magnificent strips well worth checking out.

Steve Ditko was quite reclusive, refusing interviews and publicity, but he carried on producing his own comics right up to his death. I'm sure others will go into more detail about his life, but today I just wanted to post my personal thoughts about his work. His classic strips continue to be popular, and Panini UK's Mighty World of Marvel is currently reprinting his early Doctor Strange strips every month. Check them out! 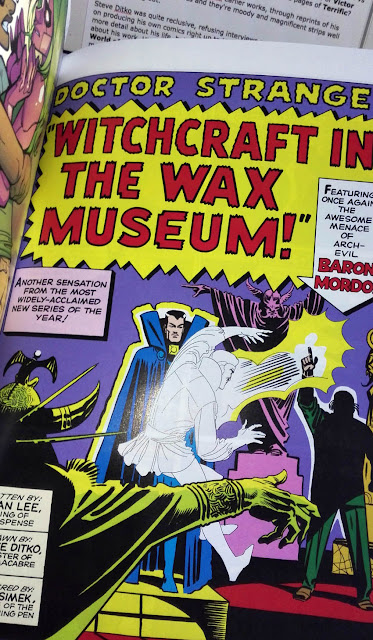 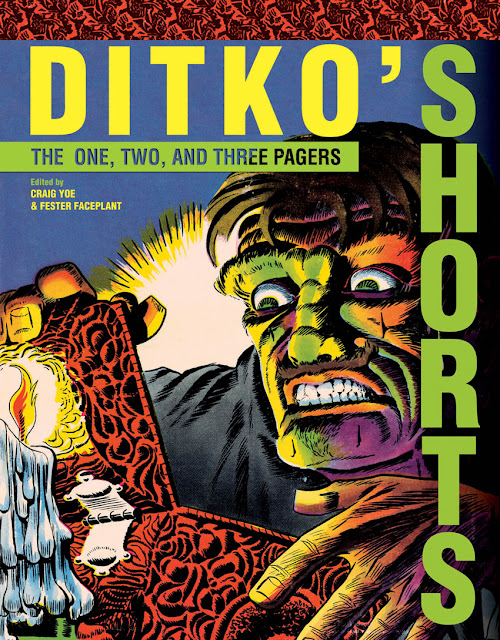 Rest In Peace, Mr.Ditko, and thank you for the memories of such amazing work, and for the work of yours I've still to discover!

Nice tribute Lew. Another legend / giant of the comic world has passed on so thanks Steve for your wonderful contribution to comics and the fun you gave to millions of kids (young and old). Like yourself my first (remembered at least) encounter with Steve Ditko's work was through the Odhams comics where I first read Spider-Man and through numerous Alan Class reprints showing those stunning art wise (fun story wise) Atlas/Marvel short SF / Horror stories. I didn't find his Doctor Strange art until Avengers weekly issue 1 which is by far my favourite of Ditko's work and still one of my all time favourite strips - Ditko's other worldly take on the supernatural world of Dr Strange is one of comics high points (imho) . I had forgotten he did a few issue of the Hulk until you showed that here but as I recall it was pretty good as well. I also missed a lot of his early work at DC only picking up the odd back issue of the Creeper much later and really enjoyed it as I did with Shade the Changing man a few years later. I think special notice should be given to his early Capt Atom, Blue Beetle, Question strips at Charlton some lovely art there also .

Thanks for commenting, Paul. I'm surprised you didn't see Dr.Strange until the Avengers weekly in the '70s. Didn't you read Terrific in 1967? (I've always assumed most comics readers in the 1960s read all the Odhams comics at some point but maybe not.)

Hi Lew no we didn't get Terrific at all although my brother got the odd issue of "Fantastic" but we struck mostly to POW, WHAM and Smash from Odhams - my brother wasn't a big fan of superheros or comics in general and I was a bit young in the head even at 7 years old and only really liked cartoon / humour comics at that age, my loss as Terrific etc look really good comics.

Wow I just read the news about Steve's passing. It was a shock although I should not be surprised as he was 90. I think it strange that his art was always playful even though the man viewed life so seriously. I suppose it is the mark of a great craftsman that he kept his art and his beliefs in different compartments. They did come together though in Mr.A. Hale and farewell Mr.D

A very good eulogy for Steve Ditko, thank you Lew! I bought American comics from market stalls or off the spinner racks some years earlier than the British reprints. I too will always remember Hulk 2 and the early Doctor Strange. We used to hunt around Leeds market searching for Ditko and Kirby's work and were rewarded every Saturday morning, with battered copies of Amazing Fantasy, Strange Tales and all the other Atlas/Marvel comics, as well as the British reprints with their many outstanding Ditko covers - Creepy Worlds and my favourite - Weird Planets often featuring the Mysterious Traveller, deliciously creepy, even today. Ditko may be gone but he will never be forgotten.

Those Alan Class reprints were favourites too. Weird Planets had gone by the time I started reading them, but Creepy Worlds, Secrets of the Unknown, etc were still around.