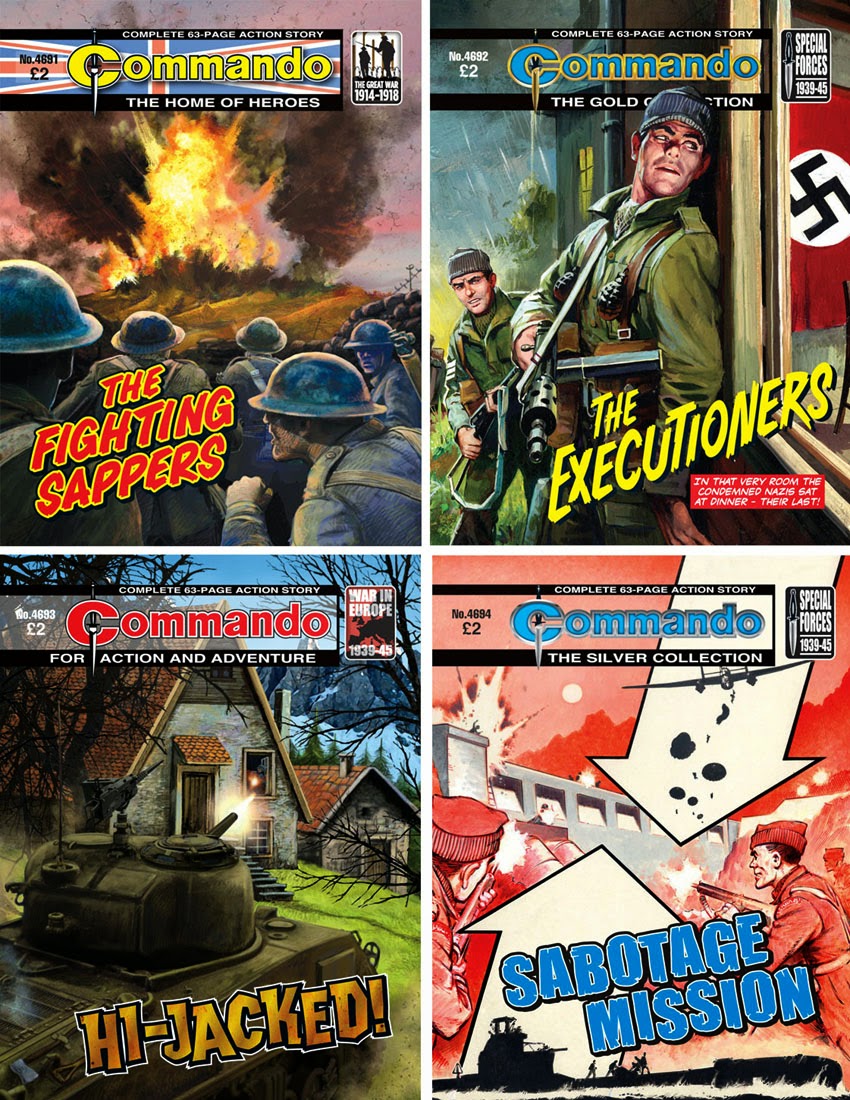 Direct from DC Thomson, here's the info for the four issues of Commando that are in the shops now, priced £2 each.


Commando No 4691 – The Fighting Sappers
Young recruits Harry Blake and Charlie Yates had signed up for the infantry but ended up being sent to a tunnelling unit on the Western Front, part of a team of Royal Engineers — or “Sappers” as they were more commonly known.
Although the Sappers usually laboured beneath the trenches, rather than in them — their work was every bit as dangerous. And soon the pals realised that the fighting underground could be every bit as fierce as that on the surface...
Story: Ferg Handley
Art: Vila
Cover: Janek Matysiak
Preview: http://www.commandocomics.com/latest-issues/27th-march-2014-collection?issue=4691

Commando No 4692 – The Executioners
It was known to British and Germans alike in that bullet-raked valley as “The Villa In No-Man’s-Land” — a bleak, deserted house commanding vital sections of each front line. But this was no ordinary house…
Nazi officers who took possession of it were found stiff and dead at their dinner-table. British patrols who moved up to investigate were never seen again. There were rumours of mysterious sounds heard underground, of secret passages and tunnels, of invisible voices and footsteps.
Then Sergeant Gunson and three Commandos were detailed to investigate — and execute — whoever or whatever was haunting the “Villa In No-Man’s-Land”.

Introduction
Chaco’s cover and the title tell you the whole story, don’t they? A Commando squad on an assassination mission ready to strike…except that this Powell story has an unexpected surprise which takes the whole plot in a different direction. It does something that is difficult to pull off in a Commando story; it has all its action compressed into a short time frame and takes place in a very small area. That could easily be a recipe for a long series of repetitive pictures but, thanks to the skill of the author and artist Bielsa, it’s not.
Go on, read it and see if you agree.

Commando No 4693 – Hi-Jacked!
By 1945, Sergeant Joe Kellis and his Sherman tank crew knew that the end of the war in Europe was in sight. They were hoping that it might end quietly for them.
Then their tank was hijacked by a couple of Italian deserters and they found themselves mixed up in a dangerous scheme involving stolen gold that could see them on the run from both sides.
A quiet end to the War…? Not a chance!

Commando 4694 – Sabotage Mission
The raiders’ objective was vital. If they reached and destroyed their target, it would be a bitter blow to the enemy. But the greatest danger the forward recce party faced came from within their own ranks…the result of an old grudge which could only mean BIG trouble.

What’s in a name? Or rather, a title?
Here, author Peter McKenzie’s working title was “A Question Of Trust”. Personally, I think that’s a great title  —  one which neatly sums up the underlying theme of this tough action-packed tale.
However, as good as it is, that title doesn’t quite match up with artist Jeff Bevan’s inventive, offbeat cover. The more robust, straight-forward “Sabotage Mission” fits the bill perfectly. Where possible we would always try to use a writer’s original title but the Commando editorial team from 1989 made the right decision in changing it.