Psycho Gran returns in her own comic 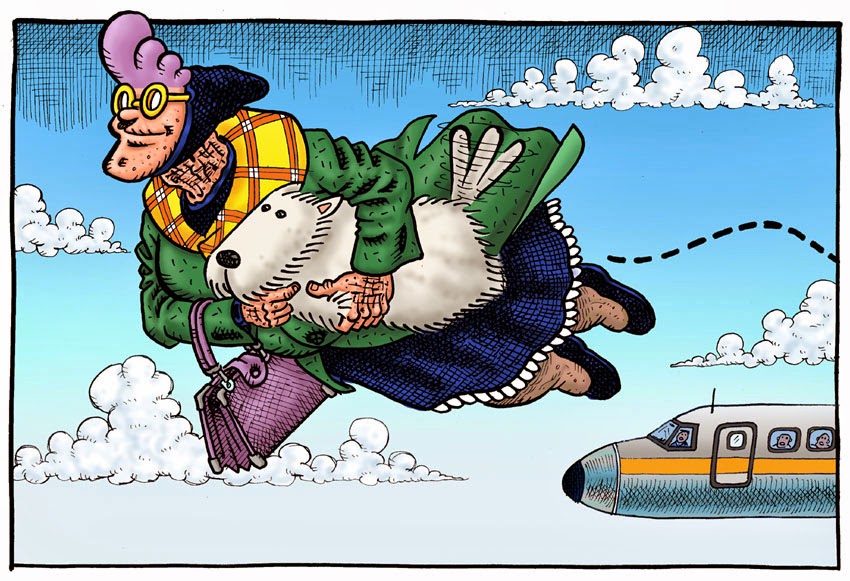 One of the stars of 1980s cult comic Oink! makes her welcome return this week in her own title. David Leach's Psycho Gran No.1 will be available to buy as a digital comic from Titan Comics on the ComiXology app as from tomorrow (March 26th), - a day now known as Gran-day!

I'm really pleased to see this happening as David's style of comedy has always amused me and over the years his artwork has continued to develop and reach new heights. Psycho Gran is too good a character to keep down, - and she just wouldn't allow it anyway.

First published in the British kid's comic, Oink! Back in 1986 Psycho Gran is the psychotically demented brain-child of cartoonist and comic book editor, David Leach – winner of Channel Four's Come Dine With Me, editor and writer of the Wallace and Gromit newspaper strip and the Adventure Time comic magazine and editor of Roman Dirge's Lenore. David is also the co-creator of cult 1990's strip The Driver for the British cult comic, Toxic!.
Psycho Gran (or Psycho Besta as she's known in Norway) is a five-foot high, mauve-haired, bespectacled psychotic granny with a pan-dimensional, sentient handbag called Percy, a flying dog called Archie and a pathological loathing of rudeness. Join her for an all-new 29 page, full-colour journey into a surrealist slap-stick world of rampaging kaiju (that’s giant monsters to you!), neo-Nazis skin-heads, bag snatchers, death-row inmates, explosive diarrhea, those annoying SOBs who will insist on using their bloody mobile phones in cinemas and innocent people just minding their own buisness.
She puts the Old into Old Skool! 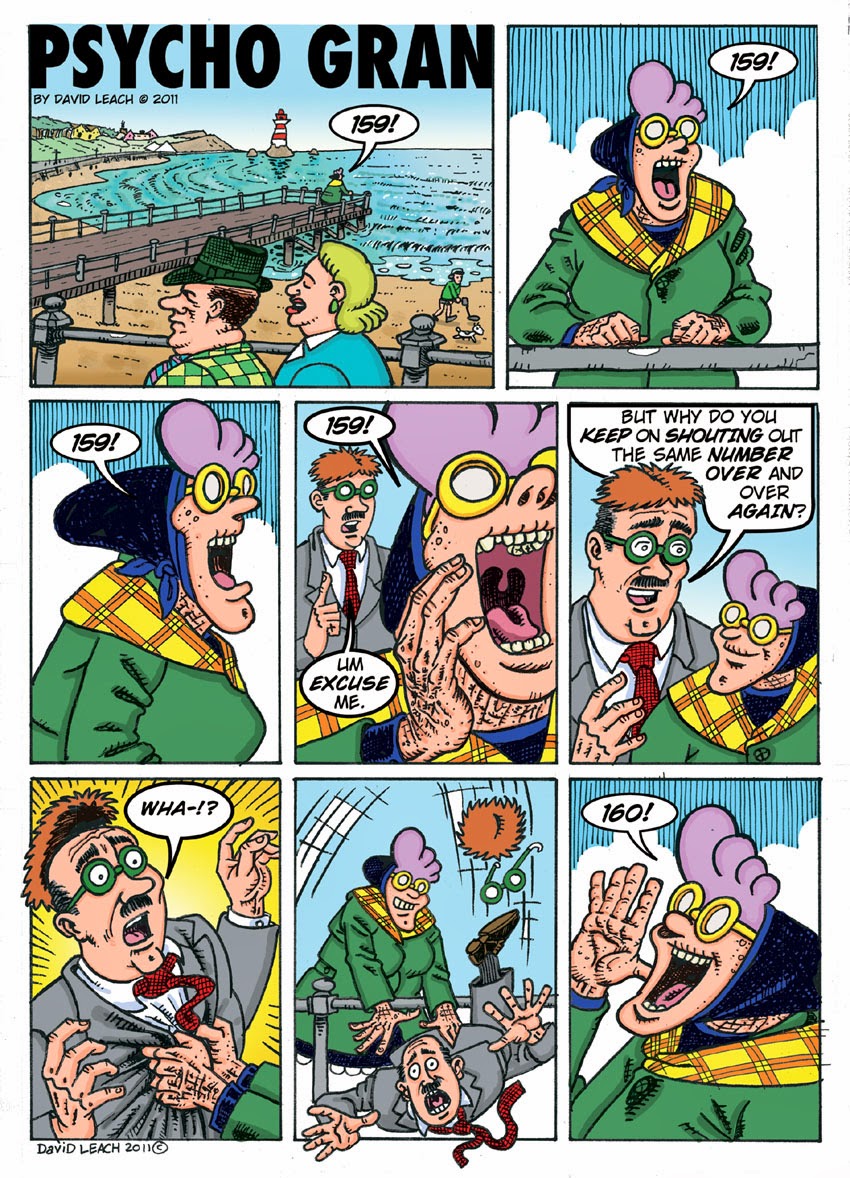 “Dark humour cartoons used to be a strong part of British comics, now sadly long gone, apart from a few adult comics and great strips like Psycho-Gran. I have particularly fond memories of David's "The Driver" and "Dinner Ladies From Hell" and his Psycho-Gran is in the same hilarious mould. It's an excellent representation of the British black comedy we need so much more of.”
– Pat Mills, creator of 2000AD, Action, Battle writer and creator of Sláine, Nemesis the Warlock, Marshal Law, Charley's War and the ABC Warriors.

"Um, how about ‘...David Leach's Psycho Gran is a satisfying blend of top-notch draughtsmanship and gruesome silliness...’ Or something like that? A bit short, I know, but I put the dot-dot-dots in to make it look like it's come from a longer review. “
– Davey Jones, Former Viz Editor.

"David Leach takes comic violence to the next level with the powerful and genuinely funny imagery of Psycho Gran. The most Gran-tastic comic book you'll ever read!" –
– Lew Stringer, creator of Combat Colin and regular Viz and Beano artist extraordinaire.

“Psycho Gran is unique and genuinely disturbing, and so is her creator.” – Peter Hogan writer of Resident Alien and Tom Strong

“I grew up with Pyscho Gran as an inspiration for not only how to draw comics, but how to live my life. She was drawn in a style I'd never seen before in children's comics, and the humour was so dark and so BRUTAL, it affected me in ways no other comic had.  A real eye-opener for what children's comics could, and should, be.”– Jamie Smart, creator of Bear, Corporate Skull and Desperate Dan and Dandy relaunch artist.

“Terror has a new face…. and a purple rinse …With Psycho Gran, David Leach forges a new genre of Octogenarian ultra-violence, surreal and disturbing but a right ‘bloody’ laugh. Harry Brown it’s time to collect your pension”
– Stuart Jennett artist and writer of Chronos Commandos.

Make it a date, - Psycho Gran No.1 - on sale from your Internet on Wednesday!
http://www.comixology.com/Titan/comics-publisher/92-0

She has appeared Norway in the NEMI magazine where she is known as Psycho Besta.

After a 25-year absence she returned in the Japanese Tsunami appeal book, Spirit of Hope in 2011. 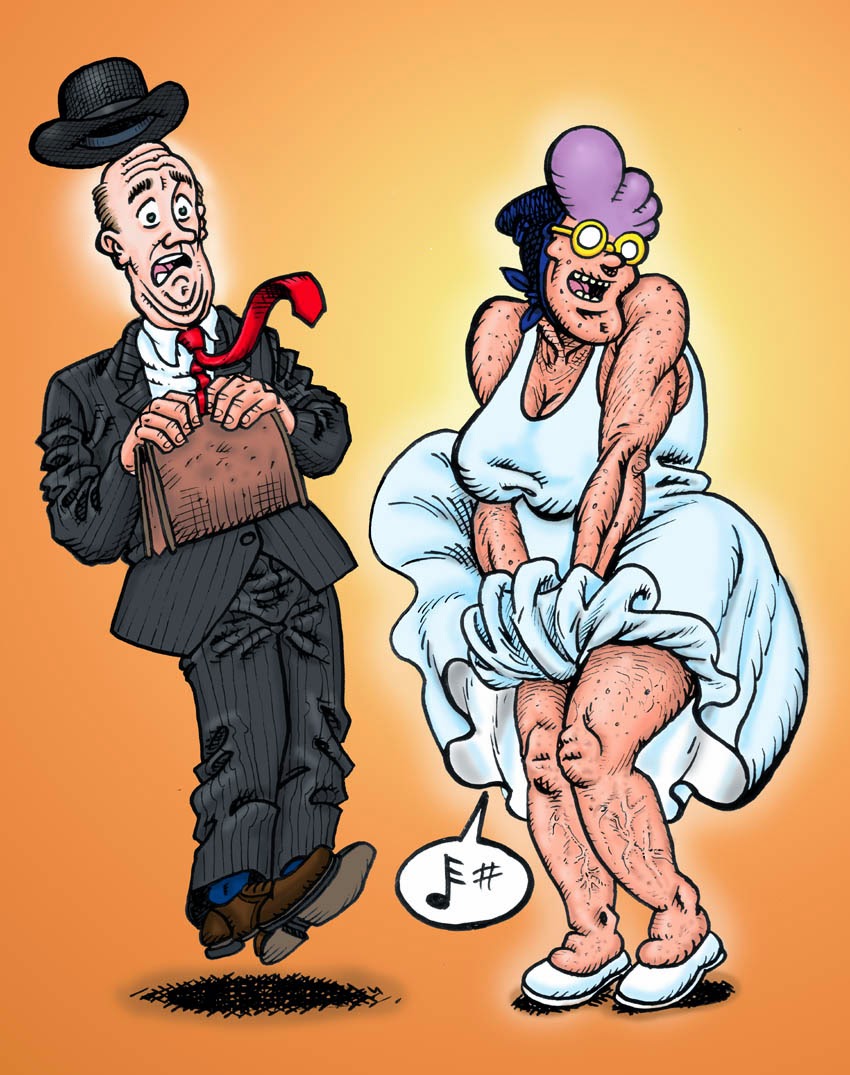 Hiya Lew, enjoying the blog- only just found it so I'm working through the years of posts. We're the same age and of similar background I think, so you've been taking me on a trip back through my own memories! Bought Psycho Gran last night on your recommendation and really enjoyed it. Good call! Cheers Steve

Glad you enjoyed it, Steve! Have you seen the new Psycho Gran strips in Aces Weekly?