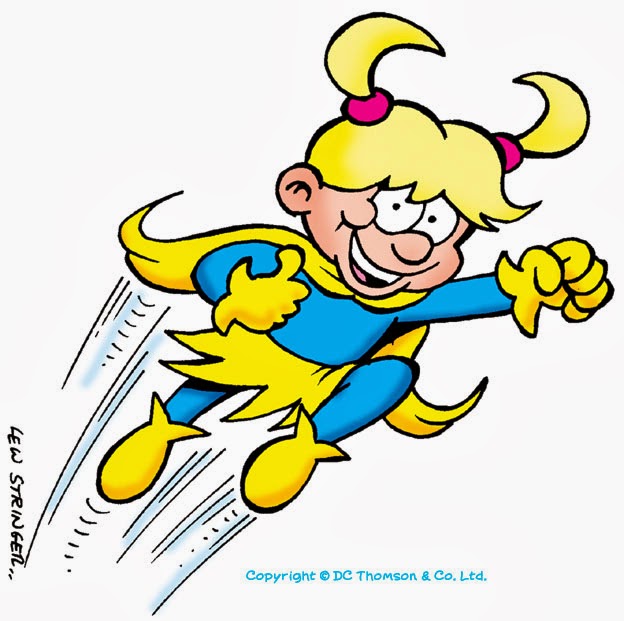 ...over the news that broke yesterday about the Bananaman movie!

Elstree Studios are involved. Speculation on the Internet is rife. Will it be live action or CGI? Who's in it? How far will it divert from the comics?

And will it guest star Bananaman's niece Bananagirl, who was in the Super School strip I used to do for The Beano? (Probably not, but as everyone else is reporting the news with an image of Bananaman I thought I'd feature Bananagirl on my post instead.)

All I know about the project is what's on the official website, which is practically nothing. Looks like we'll have to wait and see.

Bananaman originated in Nutty comic, moved over to The Dandy, and now resides in The Beano every week. Let's hope this news brings the comic new readers. (Next Beano is out tomorrow, priced £2.)
Posted by Lew Stringer at 22:34

Email ThisBlogThis!Share to TwitterShare to FacebookShare to Pinterest
Labels: Bananagirl, Bananaman, The Beano

Thanks to Huffington Post, we now know that it's live action.

Personally.. Just make a hand drawn cartoon and voice it be the goodies and I'll be pretty much happy ^_^

The usual procedure on the Internet is for people to imagine what the film might be like, then get angry about their own speculations before the cameras have even rolled. That's always entertaining to see. :)