I was sorry to hear today of the passing of Steve Moore, a familiar name in British comics. Steve began his comic career in 1967, as the office junior at Odhams on such titles as Fantastic and Pow! He was also very active as one of the founders of comics fandom in the UK at that time, publishing the fanzine Orpheus. Together with Phil Clarke and Mike Higgs, Steve organized the very first British comic convention, which was held in Birmingham in 1968. It was even given a plug in Pow!'s News From the Floor of 64 feature at the time... 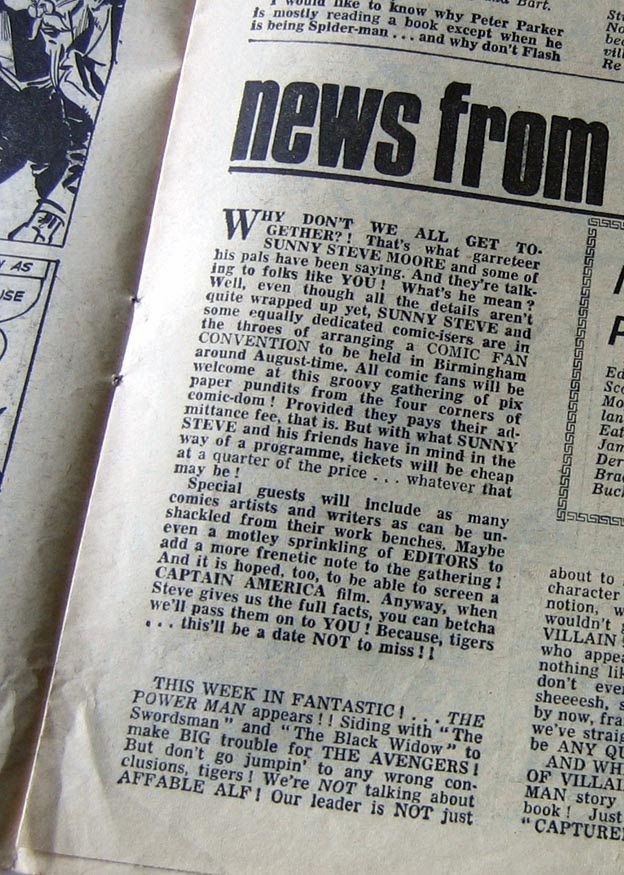 Having honed his writing skills working at Odhams and IPC, Steve went freelance in 1972. He produced scripts for Dez Skinn's House of Hammer, as well as for Tornado, 2000AD, Doctor Who Magazine, Hulk Comic, various annuals, and more.

Some of his best remembered work was for Warrior comic in 1982 on Father Shandor (with artist David Jackson) and, under the pseudonym of Pedro Henry, writing Laser Eraser and Pressbutton. 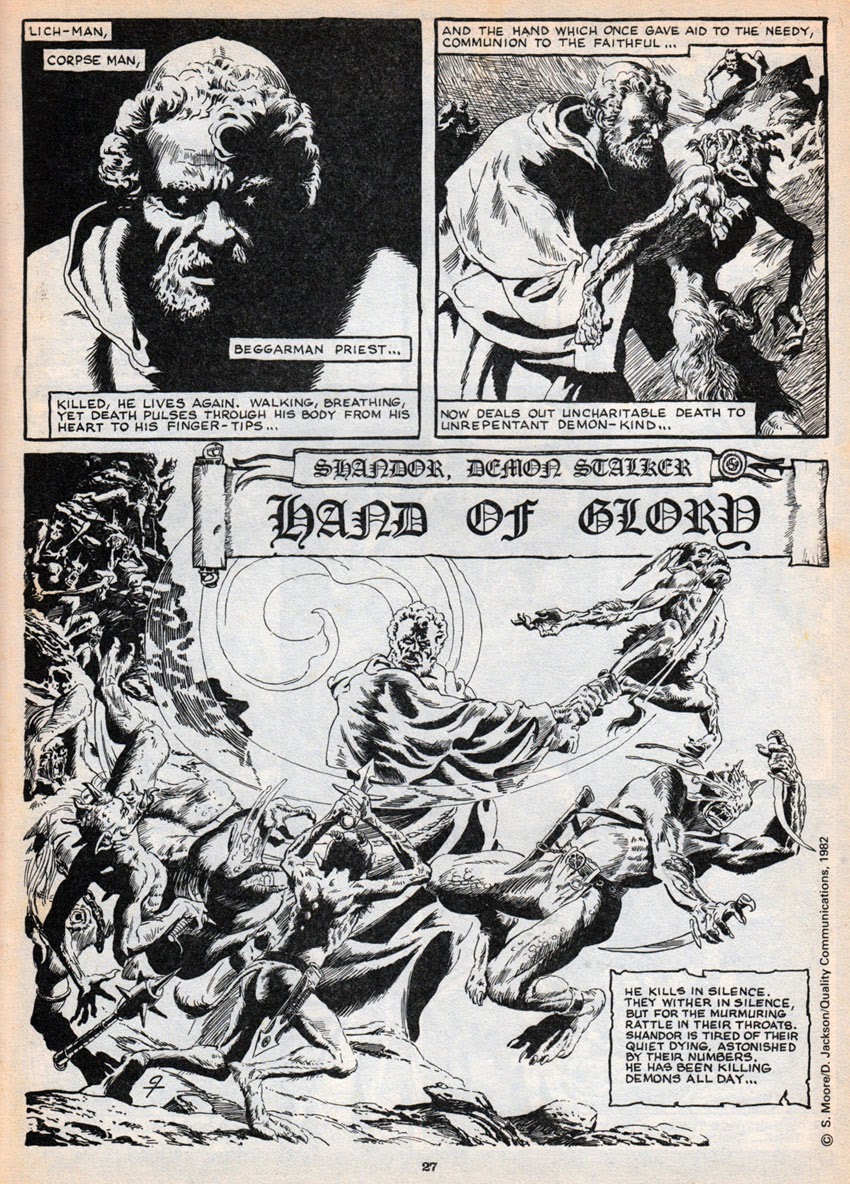 With an interest in the strange and paranormal, Steve was one of the founders of Fortean Times in the early seventies. Amongst his closest friends was the writer Alan Moore (no relation) who he had known for over 40 years. Alan has always said that Steve Moore was a mentor to him, teaching him the craft of writing. For the past few years, Steve and Alan had been collaborating on The Moon and Serpent Bumper Book of Magic for Top Shelf Productions.

Back when he began his long career, Steve was nicknamed 'Sunny Steve Moore' by the editors at Odhams (who were keen to imitate Marvel's knack of nicknaming creators). Here he is, being a good sport, from the pages of Fantastic No.50, 27th January 1968... 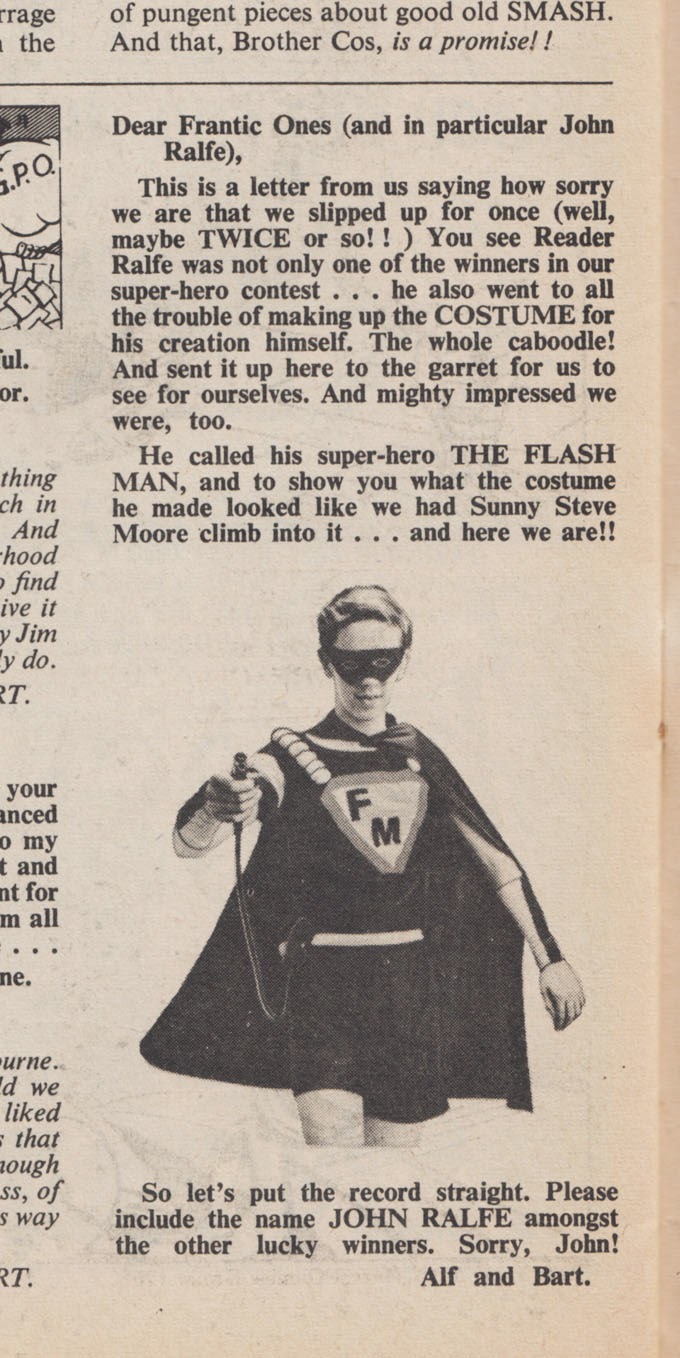 Although he was an organizer of the first comic convention in Britain, Steve rarely attended comic conventions himself. I met him once or twice when he was a guest at a London event in the 1980s and he came across as a very modest and decent person. My sincere condolences to his family and friends on his untimely passing.

Ah, very sad news. There's been a Steve Moore for as long as I've read comics.

I remember those pieces in the Odhams mags, though at the tender age of 8 I was too young to get to the convention or even think about writing away for the fanzine.

And as you say his career took in Sounds, 2000AD and Fortean Times so there's been an ongoing Steve Moore influence throughout my adult life.

Good point, Tony. Steve Moore had been quietly influential throughout so many things.

Regarding that first comic con, I was the same. Birmingham seemed so far away when I was 8 so I didn't attend. Phil Clarke and Mike Higgs often mention it though (we meet up quite regularly) and it sounds like it was a small but fun event. From little acorns...

Always sad to hear news like this, I well remember his Laser Eraser & Pressbutton and Father Shandor in Warrior, all good stuff.

Very sad news Lew. I never met Steve but his name has been around since I first bought the Merry Marvel Fanzine and Heroes unlimited. back in the old power Comics days..At 15 i was too young to go over for that first Comics Convention...Sad.

What a terrible loss. His strips were gems and his imagination boundless. In all my dealings with him he was always a polite and enthusiastic soul who will be much missed by many.