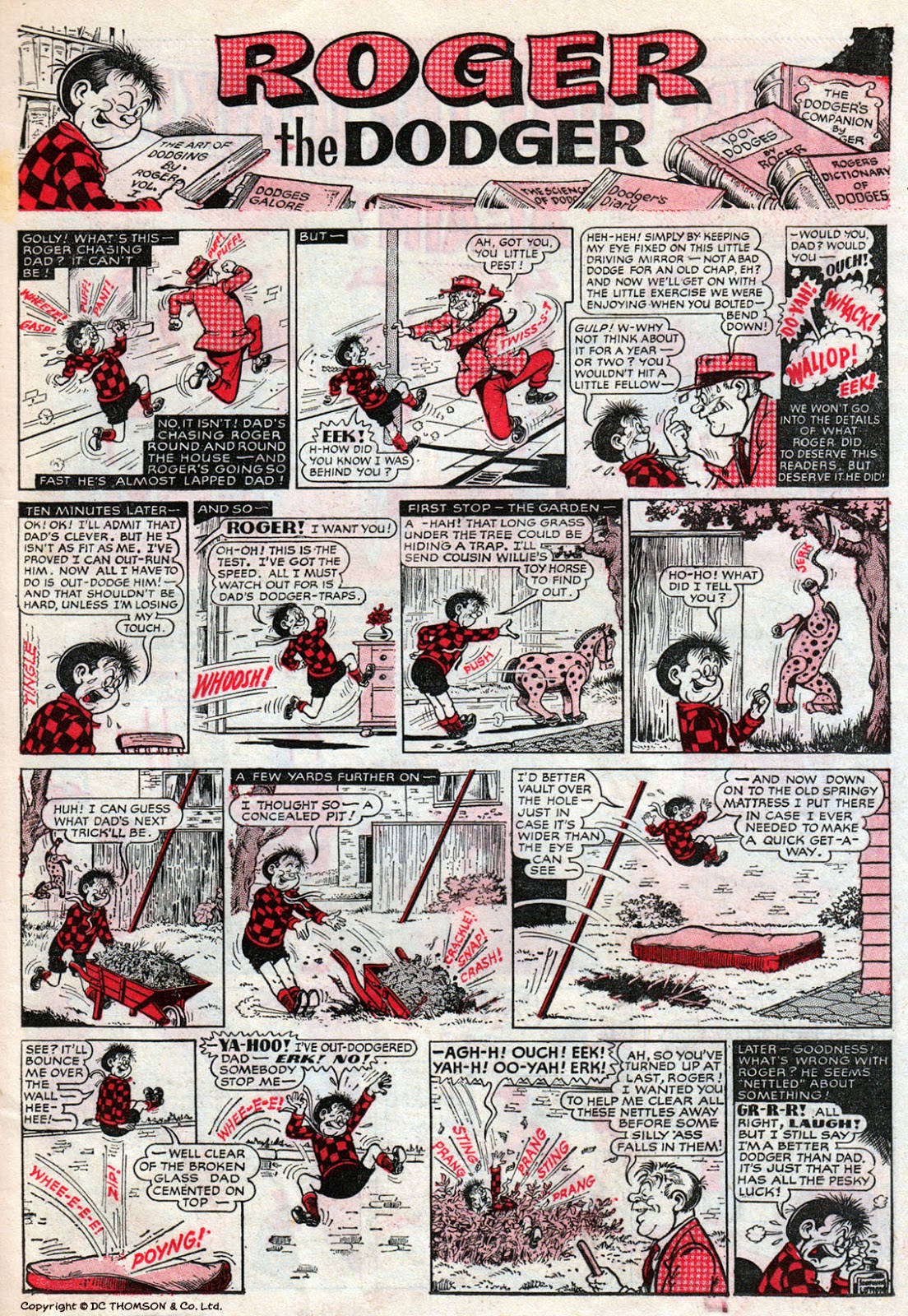 Ken Reid had been the original artist of Roger the Dodger since its beginning in 1953 (although I've seen at least one fill-in by Gordon Bell). Robert Nixon took over the strip when Ken left The Beano, and did an excellent job for many years, but it's Ken's manic version that many of us first encountered.

The following week saw Ken Reid's last ever strip for a DC Thomson weekly with his final Big Head and Thick Head on the back page of The Dandy No.1187 (August 22nd 1964). Here it is... 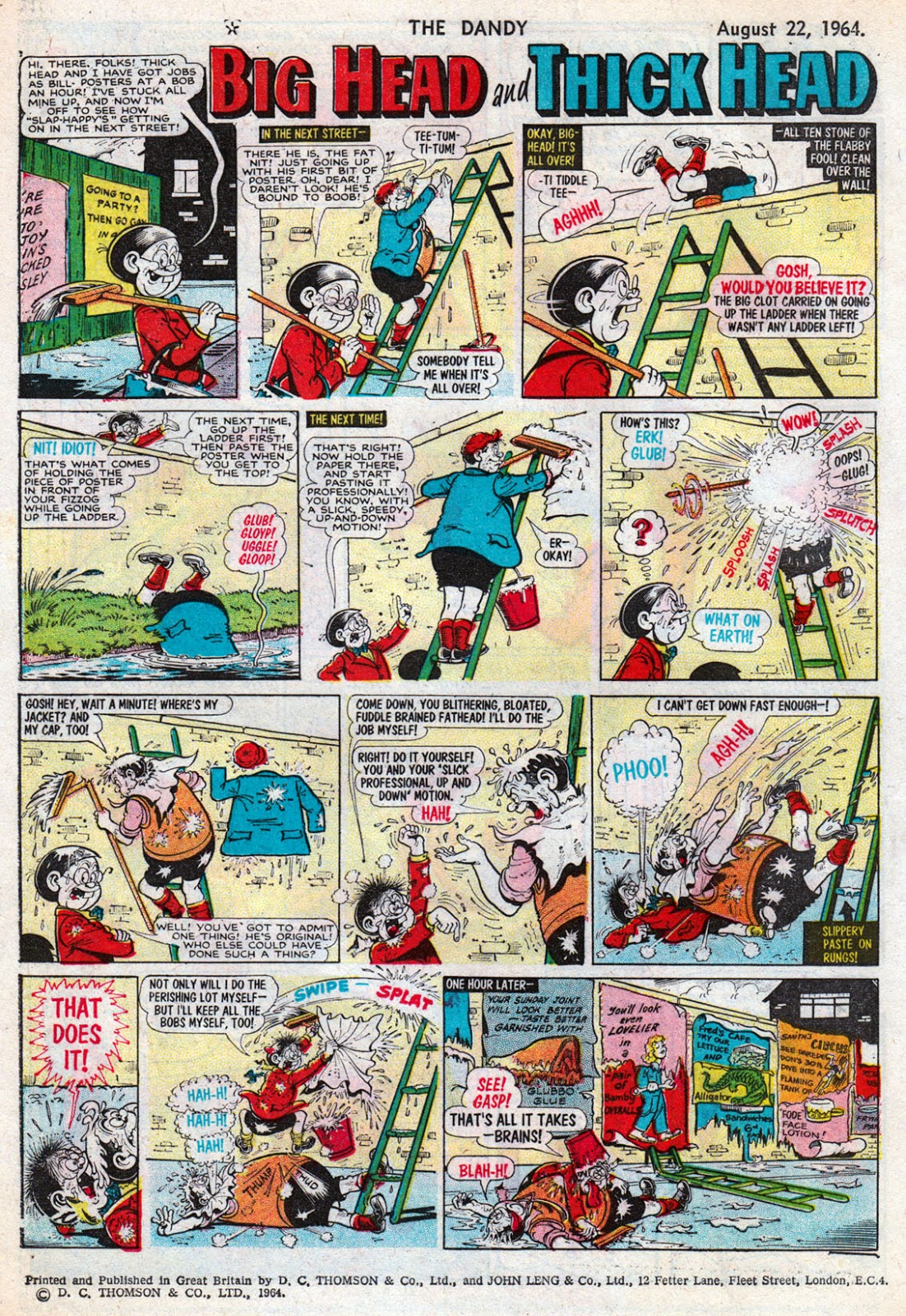 Frank McDiarmid took over Big Head and Thick Head from the following week, doing a great 'ghosting' of Ken's style.

As Ken was a freelancer, Leo Baxendale encouraged him to quit DC Thomson to work for Odhams on Wham! Obviously Thomsons worked further ahead than Odhams because Ken's new strip, Frankie Stein, had debuted in Wham! a month before his last work for Thomsons saw print. I blogged about that very first Frankie Stein strip several years ago and you can see my post by clicking this link:
http://lewstringer.blogspot.co.uk/2008/02/wham-frankie-stein-arrives.html

The actual last work of Ken Reid's that Thomsons printed was in The Dandy Book for 1965, (and possibly in The Beano Book for that year, but I don't have that). However, as annuals (and summer specials) are drawn many months before publication, Ken would have drawn those strips before the two weekly ones I've shown here.
Posted by Lew Stringer at 00:05

Email ThisBlogThis!Share to TwitterShare to FacebookShare to Pinterest
Labels: Big Head and Thick Head, Ken Reid, Roger the Dodger, The Beano, The Dandy

I seem to have a memory of Ken Reids "Rodger the Dodger" strips as a kid reading the Beano, but that seems unlikely as I would only have been 5 years old when he did this - I can only assume as we kept the annuals for a while back then that my memory of Ken Reid as Rodgers artist is from there - amazing stuff I never tire of seeing his artwork - thanks for showing this

It's still possible you read them, Paul. I was only 5 in 1964 too, but that's when I started reading The Dandy and The Beano. I distinctly remember the change in the art styles from Ken Reid to his successors. I still liked Roger the Dodger but there was something lacking, as though the magic had gone somehow. Even though Bob Nixon was an incredible talent, - absolutely one of the best, - I felt he never captured the same raw, manic, edge that Ken gave to the characters.

My god, one forgets just how good Ken Reid was! His drawing really is exemplary! Looking at these I realise too, how much he influenced me as a kid.

That said, I always hated the Dodger as a character.

And his work just got better throughout the rest of the sixties. Truly outstanding and funny work. There'll never be another!

Nice to see these landmark strips. As well as working on Big Head, Frank McDiarmid did a considerable run on Rodger, which I blogged about here.

Lovely stuff. Ken Reid really was a comic genius. I was born in 1952 so i grew up with his work . My favourite , of course , was the manic "Jonah" strip he did at the back of the Beano. It goes without saying that I loved his artwork , but i love those insults like "nit" and "clot"...Funny how they seem so of their time now...

Got to love Ken Reid's work. In my first review in Comics International Des compared my artwork to Ken Reid but of course I did not know who he was as the Beano artists were not allowed to sign their work. I went off thinking he was an underground comix artist such as Crumb or Shelton until Carl Cristlow told me who he was and that I should be extremely honoured. Man did I feel uneducated about the history of my chosen medium and made it my mission to get to know all the names of the classic DC Thompson artists. Not my fault though, I blame DC; they could have let them sign their work!

That's something that DC Thomson finally rectified in the 1980s. Too late for Ken then, but at least he was allowed to sign his work for Odhams on Wham!, Smash! and Pow! in the 1960s.

I Loved Ken's Dodger-Mind You Other Than His Football Stuff-Can't Stand Football-There's Precious Little From Ken That I Do Not Like.