You'll get a fourpenny one! 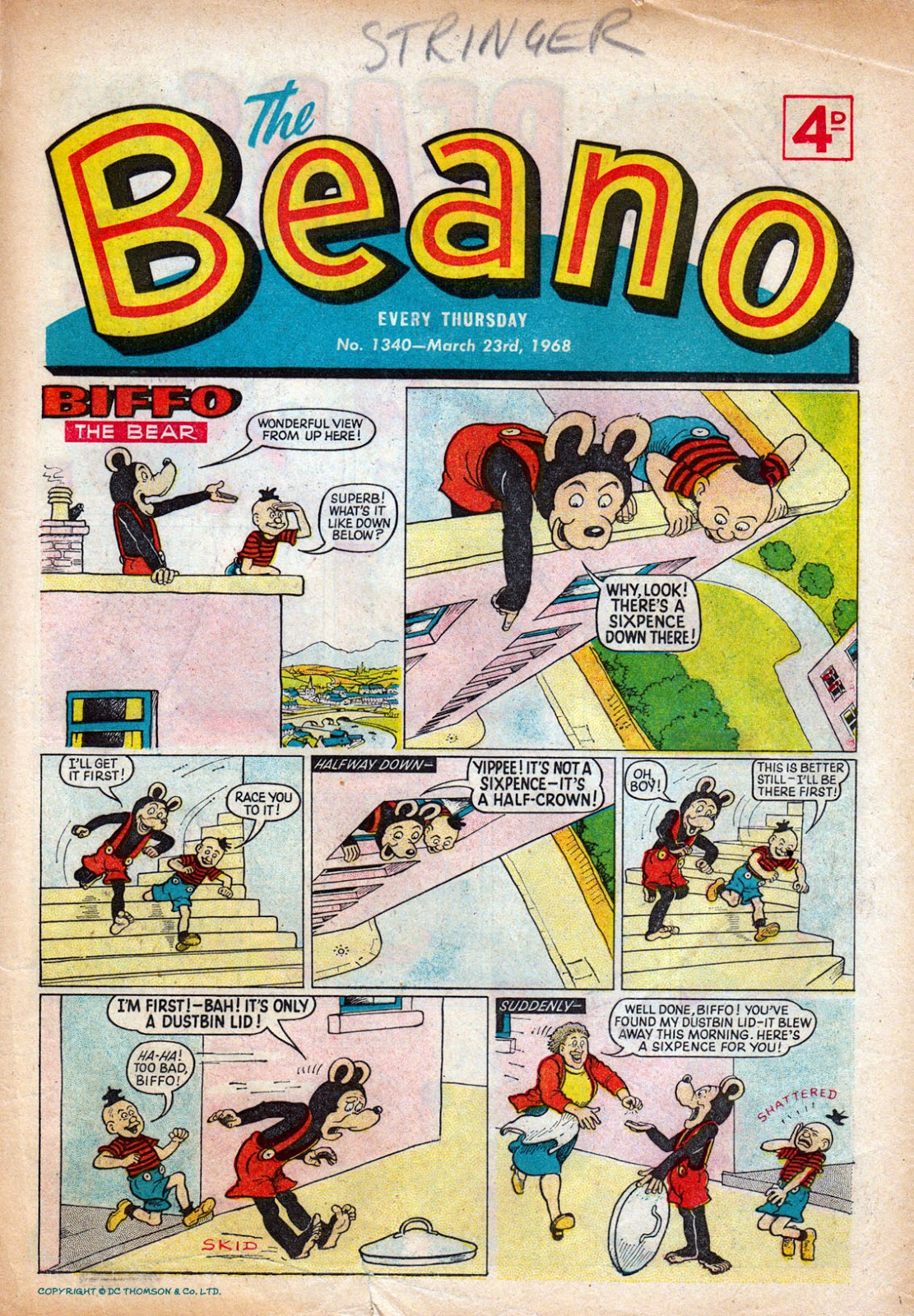 One of the many good things about growing up in the 1960s were the stability of prices. At least that's how it seemed as a child, when comics remained the same price week after week. Then, one day in March 1968, the unthinkable happened... The Dandy and The Beano increased from 3d each to 4d each! (In decimal currency that's a rise from 1p to 1 and a half pence.)

This was the first price rise the two comics had received since 1960, when they had risen from 2d to 3d - but that had been accompanied by a page increase. (However, personally speaking, as I was only one year old in 1960 it had passed me by.) I still remember how unusual it felt in 1968 that two of my favourite comics were suddenly a penny more expensive (and no extra pages either). This was the first price increase in comics that I'd experienced, - and in the week of my 9th birthday too. (I was just recovering from a bad bout of measles as well. What a week!)

Of course inflation in the years following pushed the price of everything up, including every comic, and so it increased, more and more, until we have the £2 Beano of the present day. No doubt in 46 years time, £2 for a comic will seem a similar pittance that 4d seems to us today.

There's the cover above (by Dudley Watkins) of the first fourpenny Beano. That price rise felt so unusual to me that this is one of the few 1960s Beanos I've retained.

Here are a couple of other pages from that same issue. Lord Snooty, also by Dudley Watkins... 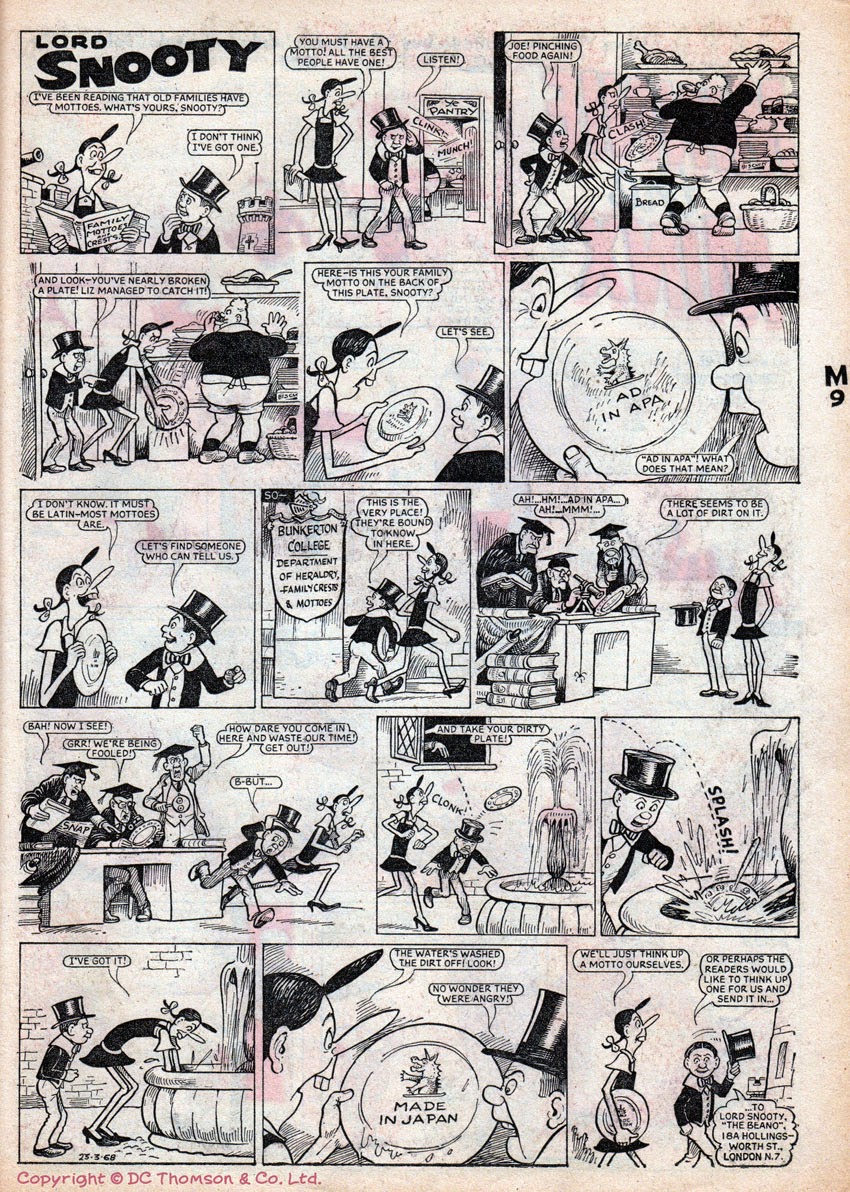 ...and Dennis the Menace by the strip's original artist, Davy Law... 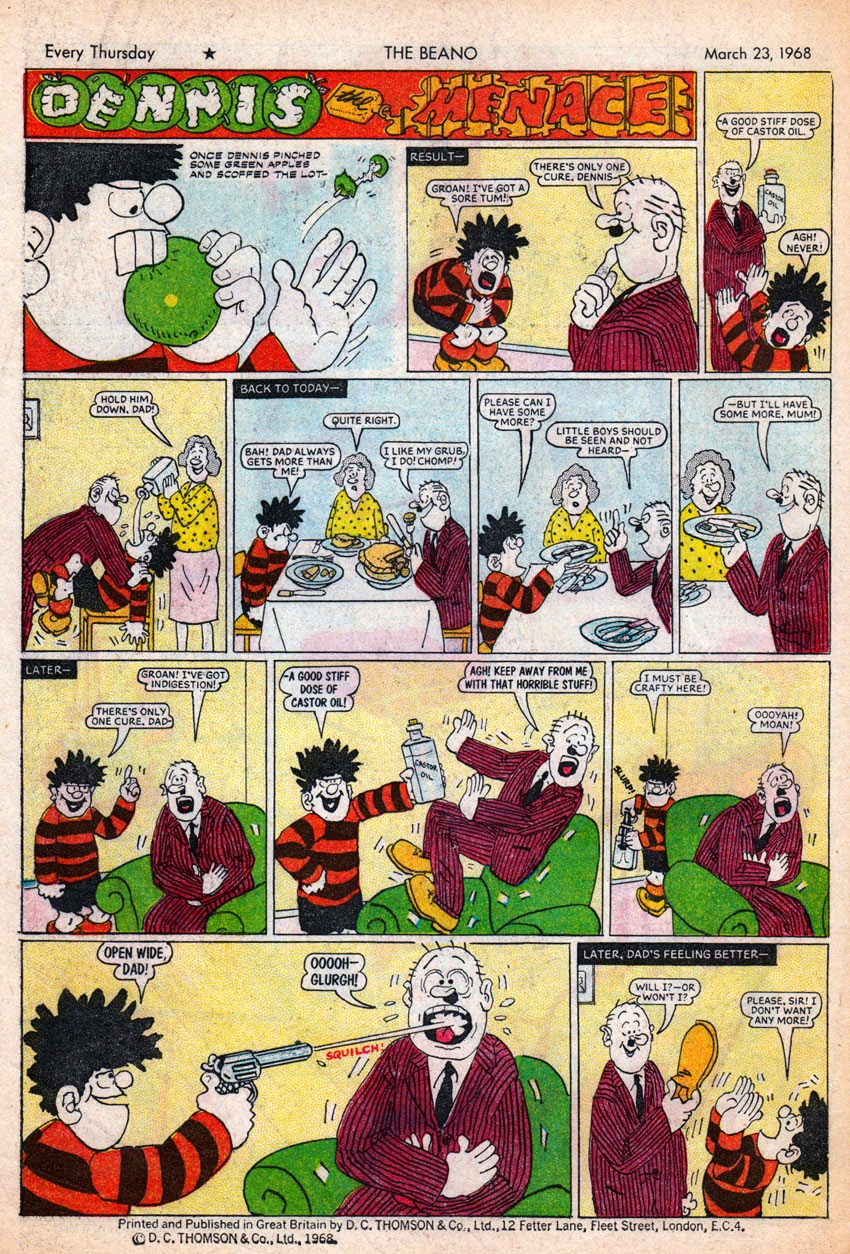 (Incidentally, if you're wondering why my name is written across the top of the cover; that's what newsagents did when you had copies reserved at the shop.)
Posted by Lew Stringer at 08:00

Email ThisBlogThis!Share to TwitterShare to FacebookShare to Pinterest
Labels: Dennis the Menace, Lord Snooty, The Beano

And I hated it , as I felt it defaced the comics! - Now there was an obsessive collector in his infancy!!

Ahh, the good old days when newsagents reserved things for you. My newsagent used to pencil my address on my comics.

Scrawling the family name on the cover was the practice of my old newsagent too, Lew - and he used biro!

Although I keep and collect comics to read, I do have to confess that sometimes wonder how much value has been wiped away from my early 2000ad's, Countdown's and TV21's (otherwise in reasonably good nick, apart from yellowed paper).

This reminds me of the traumatic year (1962) when American comics rose from 10 cents to 12 cents. They'd been 10c from the beginning with gradually decreasing page count (52, 48, finally 32). I was 13 years old and got very huffy about the change. Once the Rubicon was crossed prices rose steadily and ever faster. Nowadays I can buy one comic for $4...more than I needed to buy every comic Marvel published in its early superhero days. Sigh.

I must have blanked that 4d price rise . I think by that time I was too busy chasing girls and Marvrl were at their Ditko/ Kirby peak so the Beano was off radar until I went to art college.then I had it delivered every week with the Sunday Times.{I enjoyed that little joke!} I still have that whole batch of Beanos which I've bound into hardback books, complete with the pencilled student- flat addresses of those times. the newspapers were never kept so that says it all!!.The nostalgia....but hey, look at the quality of the artwork that was punched out every week..

Love the comments about newsagents writing names on the cover. I remember complaining to mine when I was about 10 as they always had my mum's first name on. For a few weeks after that newsagent wrote young master Jeffrey in fancy biro on my 2000AD and Battle Action for me! Happy days.

Hmm I think I would have rescheduled that Biffo strip for a week when thousands of kids weren't leaving the newsagents with less money in their pocket than they expected. Seems a little tactless.

If I remember correctly, we were made aware the week before that the price would be rising to 4d. But, yes, an unfortunate coincidence that it happened the same week that Biffo lost out.

Great to see this cover once again [in full colour, the first time I have seen the genuine article this Century!]This was one of the very best Biffo stories from my childhood, and his artwork in this later period was delightfully eccentric, and full of life and vitality..........Watkins' successor Dave Sutherland [on this character] was and is a great UK comics artist, however the spirit of Dudley D was always sorely lacking after his sad loss.

I had an outline idea for a Doctor Who series once, where he goes to 2108 and buys a history book for the incredibly cheap price of £100, paying with just one coin XD

Lew, you are quite right in your assumption that we were made aware of the price increase. The wording used is still etched on my memory, namely "Next week, your Beano will be 4d." I think it was hidden away in the middle of the comic though.

As you say, it was very rare for price increases in the sixties, which is obviously why it came as a bolt from the blue to most of us back then - and why it came back so vividly to me after reading the article!