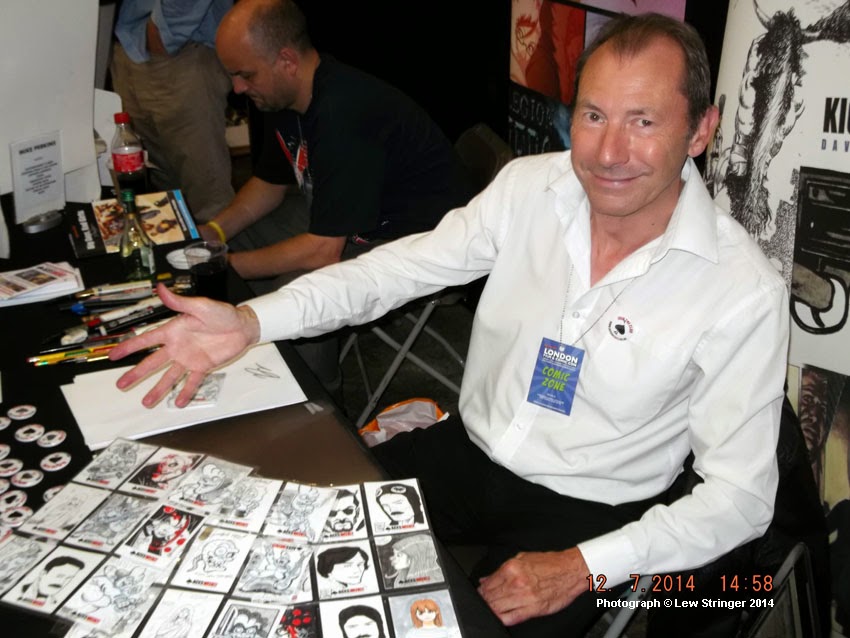 At the True Believers comic awards last night, Aces Weekly won the trophy for Best Digital Comic. The event was hosted at the London Film and Comic Con at Earls Court with an appearance by the legendary Stan Lee.

The publisher of Aces Weekly David Lloyd (shown above) collected the award. This is great news for the online comic (which has featured new strips of Combat Colin, Psycho Gran, and others) and it's pleasing to see David's hard work in promoting the comic rewarded by the readers.

I wasn't at the awards ceremony myself as I had to leave earlier to catch my last train home but I had a very enjoyable day at the convention. It was great to catch up with old friends such as Mike Collins and David Leach and to finally meet people I'd previously only communicated with online such as Jessica Martin and Gary Whittock. Next to my table was the artist Chris Geary and you can check out his website here.

Personally I had a very enjoyable day meeting readers and doing sketches of various characters. It really makes it all worthwhile to meet people who grew up on my strips years ago and know that they enjoyed Pete and his Pimple, Combat Colin, etc. As freelancers we had very little feedback from readers back before the days of social networking so it's always a pleasure to finally meet the  readers of Oink!, Transformers,etc who were our intended audience and discover that they did enjoy the strips.

I didn't have time to take many photos this year but here's a few...

A fantastic replica of the 1966 Batmobile! 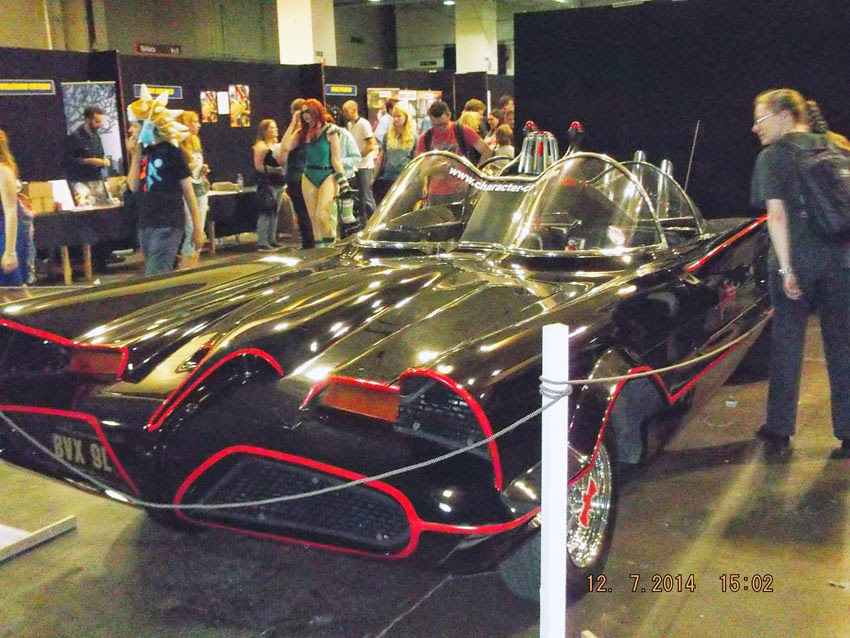 Phil Clarke, organizer of the very first UK comic con back in 1968, had a fantastic display of original artwork from classic British comics. Here he is holding a copy of one of his books, the excellent Great British Fantasy Comic Book Heroes, which I reviewed two years ago here. 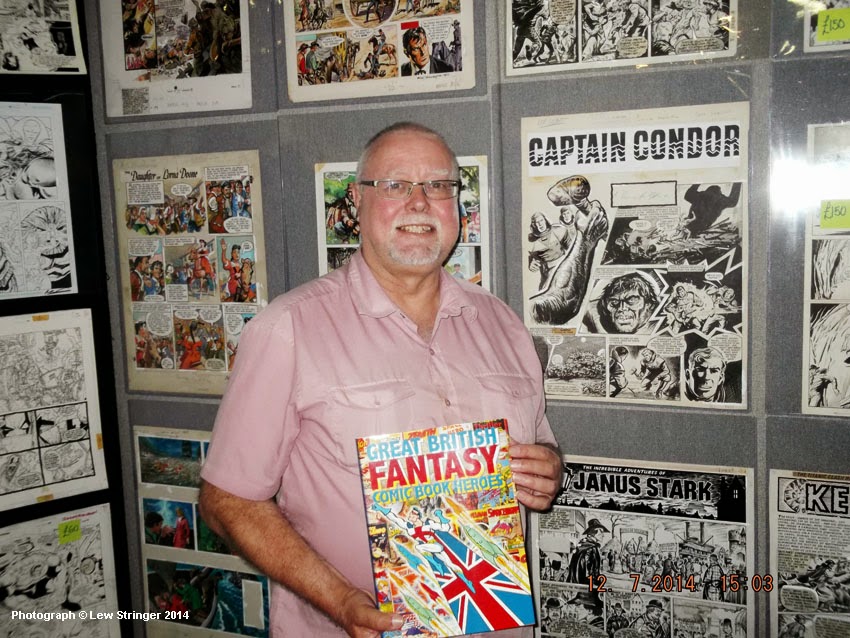 Gary Whittock with his brand new Damned Dirty Apes! comic books, which you can order from Amazon. 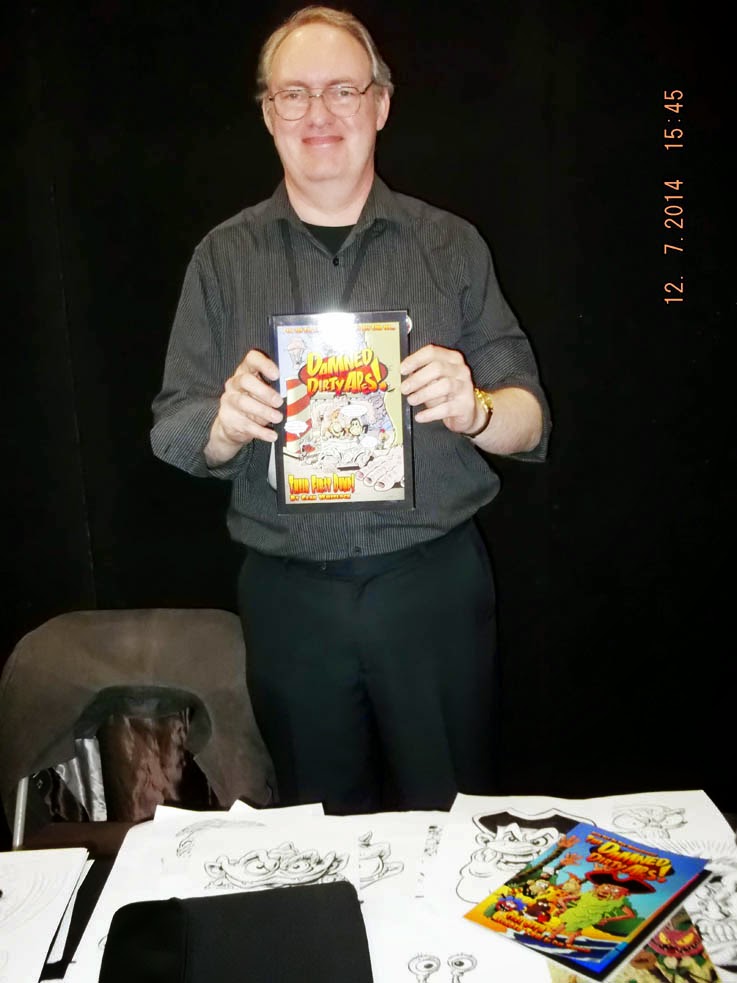 Conventions are a big attraction for cosplayers these days (or 'fancy dress' as we used to call it). Here's a pic I took of the Guardians of the Galaxy cosplayers on stage... 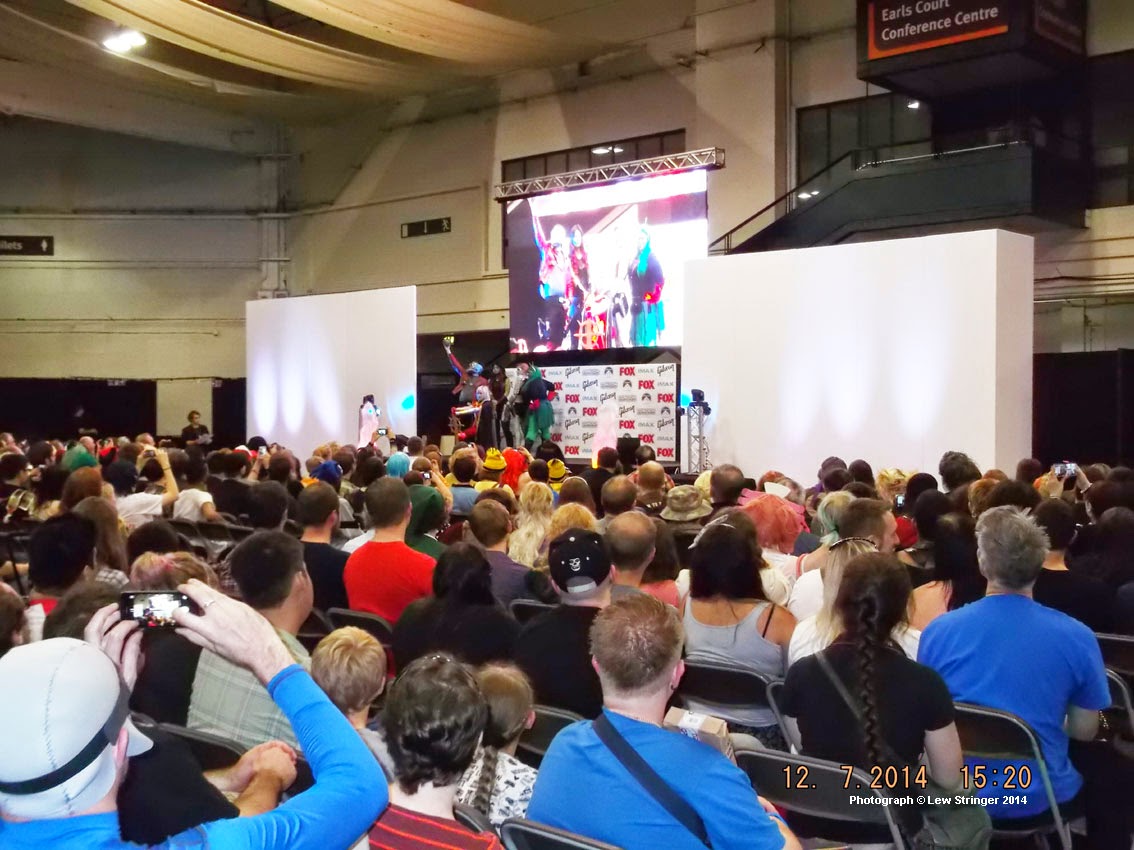 Speaking from the perspective of a guest I thoroughly enjoyed the day, although I know the incredibly long queues for things such as the Stan Lee signing were a pain for attendees. It was a shame that comic guests were in a different building to film and TV guests, and some confusion arose from that too, but it would have been impossible to fit everyone into one hall. It was a little disappointing that guests were not allowed into some of the panel discussions without tickets (I would have liked to have seen the Doctor Who panel) but it didn't ruin my day. The organisers and staff were working hard to keep on top of things but there have been some negative reports. These sort of events are growing every year and it must be a nightmare to run them. I understand there were over 120,000 attendees!

Personally I'm always grateful when anyone steps up to put on a show like this. I certainly wouldn't fancy the stress of running one! My thanks to Mike Conroy, Cassandra Conroy and their team for organising the weekend. See you at the Sheffield event on 30th August!
Posted by Lew Stringer at 17:16

The management of the London Film & Comic Con was shoddy: disgraceful customer service and highly disrespectful to dedicated fans who had travelled a long way. Badly-organised queues; poor signage; money-grabbing at every opportunity.

I missed the entire comic section because I wasn't even aware there was a second building until after I had left Earls Court 2 -- nothing on the website or inside the venue -- by which time the re-entry stamp had sweated off in the heat.

Perhaps the industry, celebrities & fans should vote with their feet and boycott these jokers. Never had this experience at MCM Expo events.

I hate the modern use of Cos-play.. it is short for Costume play.. Fancy Dress is dressing up in fancy outfit.. Cos-play is dressing up and acting. Mostly popular in japan for a while since in the US or UK, roleplayers got a very bad press ¬_¬..

For some reason, I just annoys me every time.. Evolution of a language vs just plain using it wrong ¬_¬

Anon, I wouldn't normally publish anonymous complaints as it seems unfair not to put your name to it if you feel that strongly, but I've let it through because do sympathize with some of your comments.

It's true that there wasn't sufficient information for fans or guests to know which building to go to, (on arrival at Earls Court 1 I was sent to 2, then back to 1) but everything I saw told me that the staff and organizers were working hard to put things right. This event was far bigger than last years, and I think it took everyone by surprise.

I appreciate that you're angry and if you don't attend any more of their events that's your prerogative, but I don't think a wider boycott would help anyone, in any way whatsoever. I don't know what was causing the delays in the queues, but I'm sure we'll find out. These "jokers" as you call them didn't deliberately set out to cause difficulties. Running an event with over 120,000 people and dealing with the numerous guests, at a venue that size, is no picnic and I certainly wouldn't want the hassle of doing it.

I know it's a cliché but hopefully lessons will be learned for future shows of this size.


Manic, as far as I'm concerned they can call dressing up what they like as long as they enjoy it.