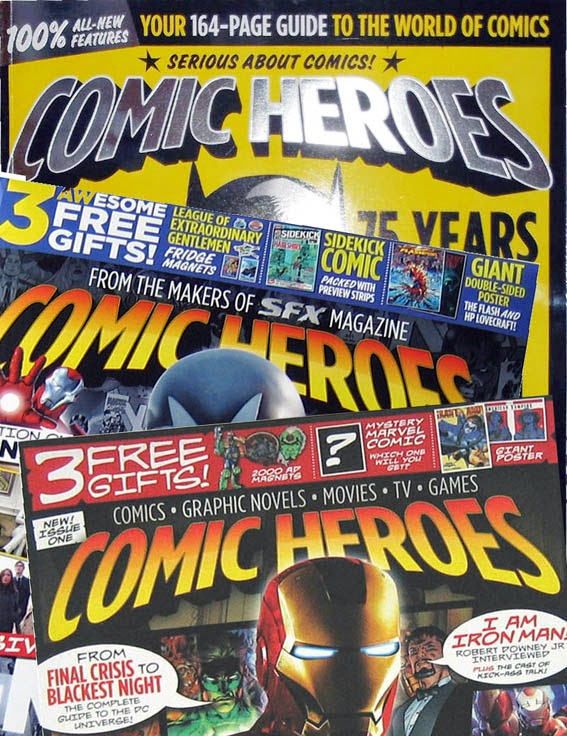 Bad news in the comics industry today. Future Publishing's Comic Heroes magazine is set to close, with the soon to be released issue 24 to be the final one.

The slick news and feature magazine was launched in early 2010 but had criticism from the outset for its high cover price of £7.99. (£9.99 for recent issues.) Yet for a chunky, professional, full-colour, niche magazine packed with information this wasn't particularly expensive at all. (Especially when one considers a standard 32 page American comic costs around £3 these days.)

One of the good things about Comic Heroes is that it was available in High Street newsagents (even my corner shop stocked it) so it was a good entry point for new comic fans who didn't have access to a comic shop in their town. Although the magazine focused primarily on high profile superhero comics (usually to tie in with the latest Marvel movie release) it also accommodated features on all areas of comics, including British titles.

I believe that Future Publishing is currently undergoing some company restructuring so at present I'm not sure if it was only the sales figures that have caused the magazine's demise. Some fans have expressed hope that the mag might continue in digital format but it seems unlikely considering that Comic Heroes' sister publication Comic Review (a weekly digital mag) has also closed.

Subscribers to Comic Heroes have been informed that their subs will be transferred to SFX magazine if they choose not to opt out.

Comic Heroes had a lot going for it, but from a strictly personal viewpoint this will always be the high point for me:

I'm not hugely surprised at this news - it was a bad omen when it went from a bi-monthly to a quarterly last Autumn. I didn't mind the price but they recently dropped the comic review section which was one of the main things I used to like about it - I know they had the digital Comic Review but it wasn't available to buy for my Android/Google tablet so that was a fat lot of good. Some of the articles were very interesting when they looked back at the history of certain characters such as Wonder Woman which they did recently but there was a lot of dull stuff too - I'll definitely buy the final issue but I'm not sure I'll miss it all that much.

Yes, the writing was on the wall when it went quarterly. I suppose they removed the reviews because they'd date too quickly in a quarterly mag, but I would imagine most readers would buy it the week it came out anyway.

It could be hit or miss with it's articles. Any features with 'Top 20, 50, 100' etc lists are wasted on me. Proper articles or interviews were the highlights for me. It could have done with more articles on the history of UK comics. I was going to suggest something but it's too late now.

That is a shame for the folk working on this book there is no denying they put a of of work and love into each issues. However, I didn't buy all the issues (a little less than half of them)and decided after the first £10 issue that I wouldn't buy it again ( I only bought that one as I was on a long train journey from London back home to Glasgow and wanted a read) It certainly looked very slick but for me personally the content was to modern and way too American plus I don't want to pay a lot of money for a comic about comics no matter the quality ( you could geta graphic novel like the excellent "Mud Man" for £12 as opposed to £10 for Comic Heroes) I think these specialist books do really need to understand that a large percentage of buyers will be casual fans and aren't looking for a mega slick 100 plus page magazine - I think Mags like "Alter Ego" etc not only have the price range correct at around £7 but by focusing on older books they have (I feel) a more ready audience to buy the book.

That's a very good point, Paul. Mags such as Alter Ego and Back Issue focus on material that perhaps isn't so easily accessible on the net. (Or in many cases may not even be online.) Perhaps Comic Heroes' focus was too current, giving it the difficult task of competing with internet news sites.

A shame, but quite a lot about it put me off apart from the price. The title made it sound like it was for five year olds, no offence meant to either Comic Heroes or five year olds. Content-wise, I think the balance was fairly good, but here's the real thing for me: I'm just not all that interested in a 'coffee table edition' magazine about comics. I'd much rather they kept the colour but lost the gloss, and the card covers. Something more like Comics International quality bog paper, at around 60 pages full color at say 3.99 and they would've had me for life. I love comics, but how many people in the UK could possibly love comics features at £9.99 a pop- especially ones primarily about the US superheroes featured so prominently and invariably on the covers?

I think part of the reason it was so expensive was to encourage retailers to stock it so they'd get a higher cut. But of course that backfires if it doesn't sell.

Perhaps someone else will have a go, with a more reasonably priced magazine, but it's not easy getting into High Street shops.

Personally I liked Comic Heroes and bought every issue, so I'll miss it.