The Best of The Victor is here! 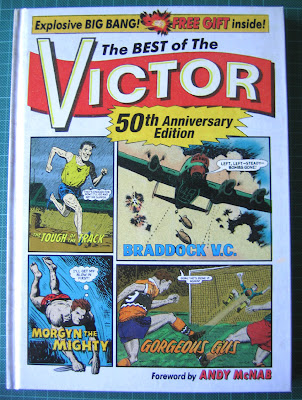 The Best of The Victor, a handsome 176 page hardback from Prion Books, is a fine tribute to the glory days of the boys adventure weekly. Compiled by Morris Heggie, most of the key favourite characters from the 1960s are here: Morgyn the Mighty, Matt Braddock, and of course Alf Tupper, the champion runner whose favourite food is fish and chips. 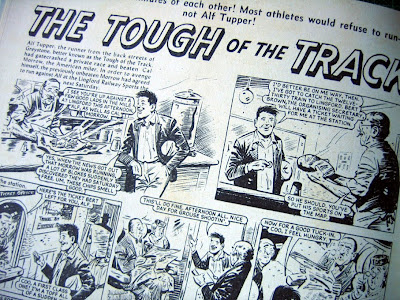 Reproduction of the strips is very good, and the pages have been given an effect which makes them look like they're printed on newsprint, with bits of wood pulp visible, just like the old comics. In reality the paper is of a high quality with a really nice texture.

Morris Heggie has used an effective technique to try and capture the anticipation of the serials whist avoiding the pitfall of leaving the reader on a cliffhanger. By spreading the serials across the book, in a sort of rotation, it works better than the relentless method of, say, printing six Morgyn the Mighty episodes in succession. 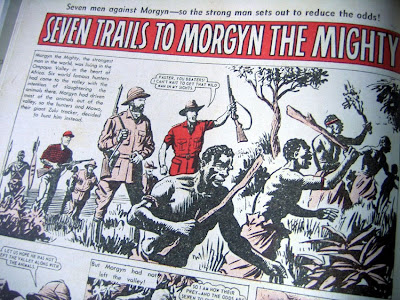 Personally I was never a fan of the D.C. Thomson adventure comics when I was a kid. They thrived on the two subjects that I loathed: war and competitive sport. (Little of which appeared in the Odhams titles or TV21, which is why I liked those comics so much.) However in hindsight I can now see what I missed; Victor featured well crafted tales of selflessness and heroism, superbly structured with clear storytelling and gentle entertainment. 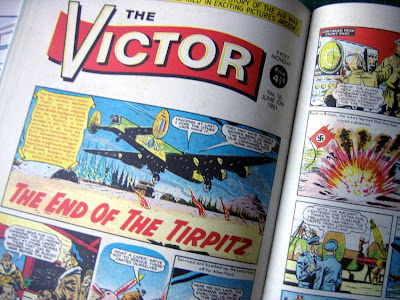 As well as the key characters there are also other less-remembered stories reprinted in the book, such as an episode of the bizarre fantasy serial The March of the Prickly Giant, featuring the menace of a giant hedgehog! You couldn't make it up, except that someone did, and it was inspired lunacy played straight. 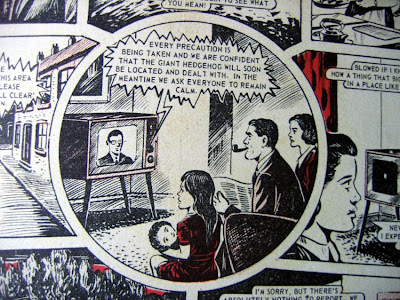 There's even a free gift inside which hearkens back to those long-lost days; one of those triangular cardboard and brown paper 'bangers'! That has to be the icing on the ingredients of this nostalgic cake.

My only criticism is that I'd have liked to have seen credits given to the anonymous writers and artists, and specific dates for when each story first appeared. I know the general public that this book is targeted at might not be interested in such trivia but it couldn't hurt to have included it. However, minor quibble aside, this is the perfect book for anyone who has fond memories of, or curiosity about, adventure comics of a certain era.

An Anonymous person posted a comment in the early hours but sadly it contained abuse so cannot be published in full. Here's the censored message, and my reply:

Anonymous said:
""Minor" Quibble? MINOR? These Prion a******* do that sistematically in all their reprints, and that's a minor quibble to you?"

Yes, a minor quibble in that it won't ruin anyone's enjoyment of the book. The general public won't care who drew what and the hardcore Victor fans will already know the identities of the artists.

I used to read the Victor as a kid, and I don't remember any of the characters you mention in your synopsis. All I can remember is the war stories and lots of "cor blimeys". Think I'll have to buy the book.

The characters shown on the cover, Gorgeous Gus, Tough of the Track, Braddock, and Morgyn the Mighty, have all appeared in Classics from the Comics in the last couple of years.

I read Victor infrequently in the mid-to-late 1960's but don't really remember any of the contents apart from Braddock and Alf. I still occasionally bait DC fans by adding Mr Tupper's name to lists of famous speed power characters.

I preferred Smash! and TV21 too so I would probably have agreed with your comments on war and competitive sport when I was a kid. But despite that, I had no problem reading the adventures of world class athlete Batman or the militaristic settings of Star Trek and Stingray. Not to mention Captain America who ticked both boxes (a super-fit acrobat fighting Nazis).