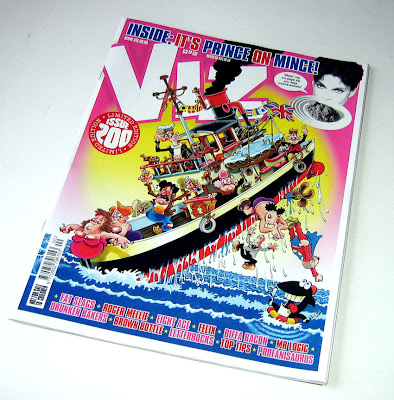 With all the anticipation surrounding the new look Dandy (out tomorrow) another comic milestone is in danger of being overshadowed. The UK's top selling top-shelf comic Viz has reached the landmark 200th issue.

With a fantastic cover by Simon Thorp the latest issue features a wealth of its popular characters including promiscuous hilarity with The Fat Slags, bittersweet drunken japes with 8 Ace and sweary sniggers with Roger Mellie, The Man on the Telly. Lots of amusing articles too, including How Mice are Made and Prince on Mince.

There's also a Felix and His Amazing Underpants story where he meets a comic collector. That'll probably offend someone it's not meant to.

I've almost finished reading the 200th Viz and have to say I'm rather disappointed. Is it me, or is it the case that it's just not as funny as it used to be? For a 200th issue, couldn't they have reprinted or resurrected some of their older classics like Buster Gonad, Billy the Fish, or Black Bag? I don't find any humor at all in a lot of the new stuff (Drunken Bakers is more like a horror / existential angst strip) and I'd rate this issue as "mildly amusing" at best.

The New Dandy on the other hand: yr synopsis alone makes it sound much more amusing & I'm going to get hold of a copy. (I was always a Beano rather than Dandy person but D Dan and one or two others made it worthwhile to buy the two.)

"It's not as funny as it used to be" is of course a Viz catchphrase in itself now. However humour is in the eye of the beholder. Personally I find it as funny as ever, but perhaps the humour style of Viz has become so mainstream after 30 years that it now dilutes its impact?

For example, the Harry and Paul tv series is pretty much a tv version of Viz, so that style of humour is no longer alternative. I dunno. I think Viz is still witty and there's always something that makes me laugh out loud in every issue.

I don't know either, especially as I don't read every issue, but it does seem to me that the wit swings up and down like a yo-yo. For instance, I thought the "How Lesbians Work" issue was very funny and that was fairly recent (about 12 months ago?). I guess, for the 200th issue, I was hoping for something exceptional. No doubt it'll come, but you're right: the promo says "3rd or 4th (or 5th?) funniest mag in UK."

As, er, one of the brother said in a Viz lecture i went to at university (no, really).