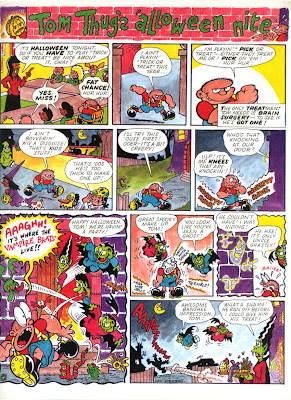 Following yesterday's post about my Halloween strips in the 1989 issue of Buster I thought I'd show the ones from the following years that I did for the comic. Above is the Tom Thug's 'alloween nite strip for the 1990 Halloween Buster featuring the Tom Thug/Vampire Brats team up I mentioned yesterday.

The Brats also appeared in their own regular strip in that same issue. (Incidentally this was the first combined issue of Buster with Whizzer and Chips.) By this time The Vampire Brats was written by Roy Davis, although I added the rhyme in the title. Writers didn't get a credit in Buster but I added Roy's initials after my signature in the final panel. 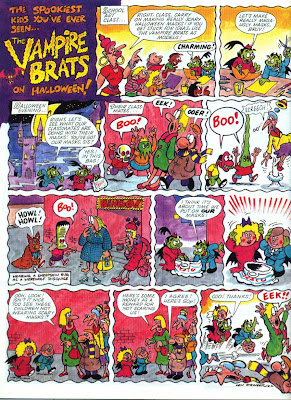 I was particularly pleased with this page from the 1991 Halloween issue of Buster... 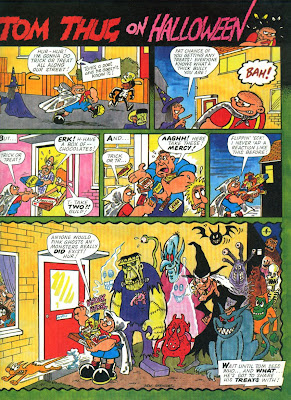 For the 1992 issue I decided to do something a little different and have Tom as a narrator of the story in the tradition of the old EC horror comics. I lettered this strip myself for a change... 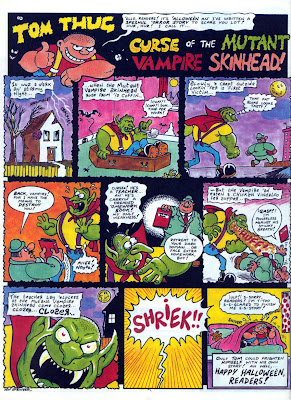 The 1993 Halloween story below is, I admit, the weakest and most traditional of those shown here. It's unusual in that it shows a rare occasion where Tom wins in the end. This was only appropriate because he hadn't actually caused any harm to anyone, so the process of Tom getting his usual comeuppance didn't apply. 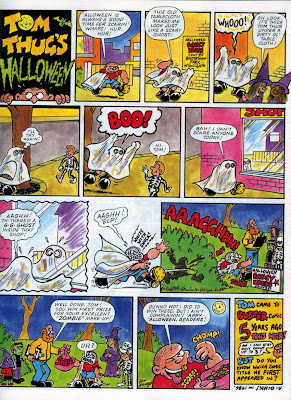 Another fairly standard type of bullying-leads-to-consequences story for the 1994 issue... 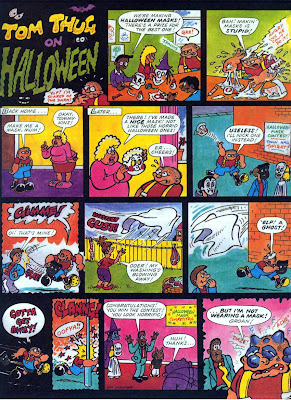 1995 saw the final Tom Thug on Halloween story (below) as Buster started using more reprints in 1996 and Tom Thug became a victim of those budget cuts. I always enjoyed doing the Halloween episodes as is enabled me to design a new spooky title logo every year. Hope you've enjoyed reading them! 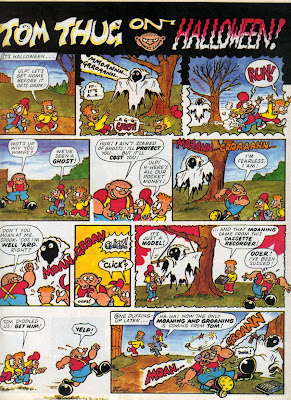 I always enjoy looking at my original Tom Thug..so glad I bought it..

the penmanship and colouring is super..especially the ones you've shown above...great night time colours..and horror..

It’s very frustrating to read these strips, as they’re among several that are not held in the British Library, whose supply of Buster ends abruptly on 15/9/90 and doesn’t resume until 20/1/98. Why’d they stop receiving it all of a sudden, and worse just before the W&C merger? My (admittedly conjectural) theory is this: on 15/9/90 The Beezer came to a technical end, becoming the ‘new’ comic Beezer & Topper the following week, new numbering sequence and all. Guessed what I’m thinking yet? Buster and Beezer sounded reasonably similar so it seems likely a cockup was made and Buster was taken to have also ended when it hadn’t. The BL have assured me that such a mistake as I’ve speculated about wouldn’t have happened; whatever, the seven-year gap stands. These were hardly the comic’s glory years, and I AM able to see the very last issue, but it’d be nice to have the ‘missing years’ there to consult. Grrr…

Possibly. I think also around that time was when Buster began to be packaged outside of Fleetway by the editor working at home so I don't know if that might have anything to do with it.