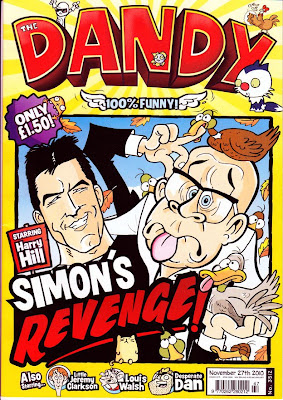 Here's a quick preview of this week's Dandy, out tomorrow, Wednesday 23rd November. Another cover by Nigel Parkinson, reflecting the story inside as Simon Cowell plots revenge against Harry Hill. Can Harry triumph over the high-waisted overlord of pop?

It's another packed issue with Jamie Oliver Twist, the Dandy Advent Calendar, Bananaman, Pre-Skool Prime Minister and more, including Kid Cops bringing their instant justice to a sports teacher who's been bullying kids... 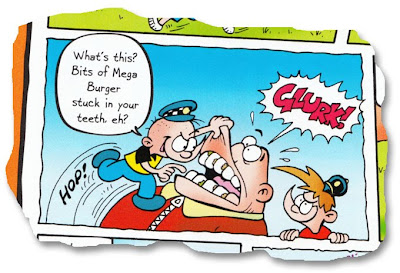 The new Dandy has been likened in spirit to Krazy, Oink!, TV Comic, and other classics, but most importantly it has its own style of a modern kids' comic. 32 pages of full colour mirth on posh paper for only £1.50 and the cover promises it's 100% Funny. You've never had it so good!

Hi Lew, Just picked up my copy, looking forward to reading it when I get in.

I noticed on the second issue cover it said 'no1 comic, in our own opinion',

but on subsequent issues it has just said 'no1 comic',

Wonder if that means its now out selling the Beano?

I'm really pleased its a success if that is the case, and long may it continue!

I think it's just a bit of hype as those covers would have been compiled long before sales figures could be determined. They haven't even had the figures for the first revamped issue yet, but I'm hoping they're a big improvement on what Xtreme was selling.

Yeah, must be hype. Last week's cover claimed to be the Galaxy's No 1 comic but Tharg hasn't complained yet (as far I know).