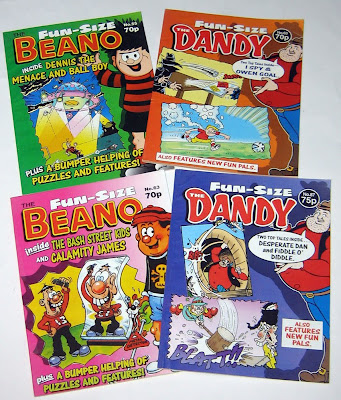 After a recent shakeup of their comics line, which saw Classics from the Comics fold and The Dandy given an all-new makeover, publisher D.C. Thomson have decided to close their digest humour comics Fun-Size Beano and Fun-Size Dandy.

The two 68 page comics, identical in format to Commando but using spot colour, had been faring poorly for some time and distribution seemed very limited. As a result they had switched to all-reprint material three years ago.

The comics were launched in 1997, replacing the Beano and Dandy Comic Libraries which had begun in 1982. So sudden was the decision to axe the comics that the last issues advertised the November issues which were destined never to appear. A similar fate befell Classics from the Comics, ending with No.175 last month but carrying an advertisement for issue 176.

It's a sad ending to the twin comics as the Fun-Size titles were a good entry-point for new artists at D.C. Thomson, as well as extra income for established ones. The page rates were not spectacular by any means but the format of the books meant that most pages only needed two panels, sometimes only one. By drawing a 25 page lead strip or one of the ten page back up stories, one could build up a nice momentum and a different pace to the story than in the weekly single pagers. 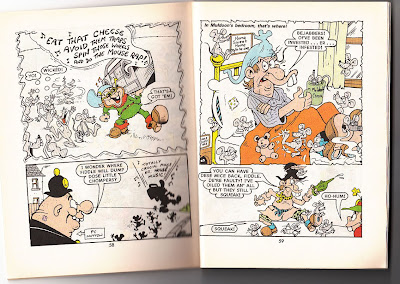 Around ten years ago I drew several stories for the Fun-Size editions including a few Fiddle O'Diddle strips (above), a Numskulls, a Les Pretend, a Ball Boy, a couple of Korky the Cat strips and, my favourite, I-Spy. 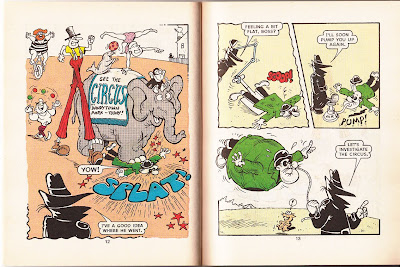 Incidentally, if anyone knows which issue of Fun-Size Dandy this Korky the Cat page of mine was from (below), please let me know as I don't think I have that issue. (Scanned from the original art before I posted it to Thomsons. The Fun-Size books often used the classic versions of the characters so it was a joy to draw Korky in the Charlie Grigg style that I'd grown up with.) 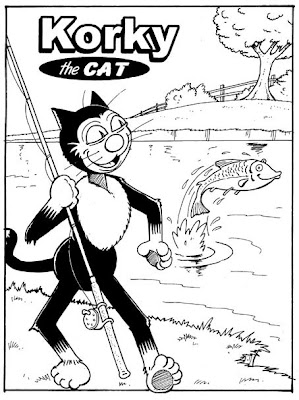 After 28 years it's a great shame that these pocket sized cousins of Dandy and Beano have suddenly folded, although not completely unexpected. The small handy format was once very popular, from the Fleetway Picture Libraries of the 1950s and 1960s to the Starblazer and Football books of the 1980s, but now Commando remains the sole remaining UK comic in this style. Fortunately D.C. Thomson are still committed to producing comics and the weekly versions of The Beano and The Dandy continue as does the monthly BeanoMAX.

ahh! I thought this must've happened!:(

I've been looking for them the past week or two with no joy. My daughter had just started collecting them. Not everyone's cup of tea but she liked them.

It's a shame when any non 'polybag free gift' comic disappears from the shelves, whatever the format.

Shame, but not as big a loss as Classics from the Comics for me personally. Talking of which I missed the final issue, can one get back issues anywhere?

Thats a real shame!
and another blow for comics after 'Classics'was recently pulled.

used to enjoy collecting these when I was younger,you could build an impressive 'stack' of them quite quickly over successive months because of their size and shape,

if I remember rightly they also smelt really nice too?!

I wonder if kids today would take to them if the format was given a modern makeover / revamp?

I think it's more to do with whether retailers would take them. Distribution of the Fun-Size comics was terrible. If the public can't find them they're not going to sell. Over the years newsagents grew less interested in the product. One once told me that it wasn't worth his time stocking them.

What does surprise me is that Egmont, DC Thomson or Titan haven't yet tried to do their own Manga size comics, despite that chunky format being so popular.

Give the D. C. Thomson Shop a ring or e-mail them at shop@dcthomson.co.uk

I was told it was also to do with changes to where DC Thomson print their titles, which aren't geared up for low print runs. This was what also spelt doom for Classics from the Comics. I'm pleased to report that Commado's sales have risen significantly in the last year, and I'm sure that's in part due to the sustained online PR Lew, me and other web sites have been giving the title. Every little helps