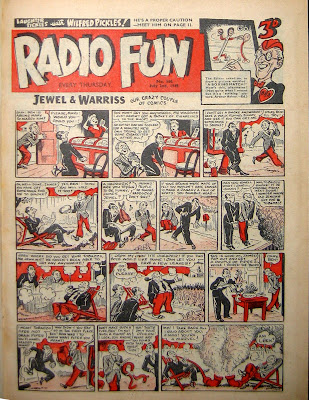 Rather than have a month's Blog Break as intended, I might do a few very brief posts, such as this one, for a while whenever I get five minutes.

Here's the cover of Radio Fun No.560, dated July 2nd 1949 in which Ben Warris seeks to satisfy his craving for a smoke!

If a strip such as this appeared in a children's comic today there'd be an uproar, with shops refusing to stock it and, no doubt, a media outrage. Yet in 1949, in more innocent times, the cover strip is all about smoking with no ill effects. Some damage to health was always known but just a year later the link between smoking and lung cancer would be discovered. Even then scenes of characters enjoying a smoke didn't vanish from British comics altogether. (Corporal Clott was still enjoying a fag in The Dandy ten years later.)

In the late 1960s there was an anti-smoking campaign in UK comics, which I mentioned on my blog a while ago. You can see the strips here:
http://lewstringer.blogspot.com/2007/03/anti-smoking-strips-of-sixties.html

Personally.. I'm not a smoker and have no wish to be.. I think it should be allowed to be shown in Comics, okay, don't go overboard with the Anti-smoking all the time, but at the same time, don't go around showing it as the Cool fun thing to do. It's kinda tricky to say where the line is...

of course.. isn't it worse that Jenkins next door 'grows his own'? even more since Tobacco leaves aren't that skinny.. Haven't seen many comics today that allow that ^_^

Nice one..
love the smoke coming out of his ears!!

Postman Prat you draw is good because it brings back the silly fun adult character..like those two on the cover of Radio Fun..

I have a comic from the late 40's featuring a tramp who follows a man smoking a cigar hoping to get the stub to finish off. The punchline is that the man throws it into a canal!
Ironically earlier in the century smoking was repeatedly condemned in comics. The editor of The Boys' Friend in the 1900's would regularly warn readers that it "makes you unfit and destroys your nerves". Plus only the bullies and ruffians of St Jim's and Greyfriars would steal away for a smoke.
You do occasionally see the odd ciggie or pipe in the background of Commando today. It's never referred to in the story though, just "scenery". Alcohol is something else though, the recent series of stories about Victorian Journalists with Ferret always on the lookout for a "gargle" was amusing!