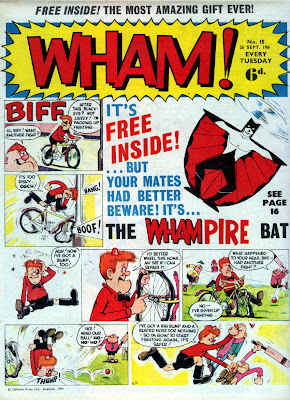 Here's another helping of free gifts that were given away in British comics of the past. First off, the WHAMpire Bat from Wham! comic in 1964. This figure had very delicate wings and although the rubber band has now perished I presume it was wound up and the Whampire then suddenly flew out when the envelope was opened. 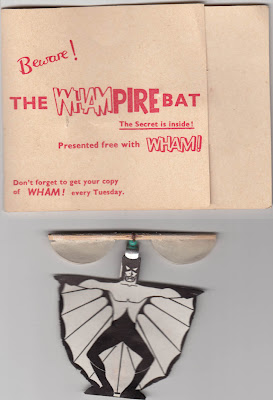 Cardboard guns were a popular free gift in the decade of peace and love and in 1967 Pow! No.1 gave away this Web-Centre Spider-Matic and several cardboard bullets... 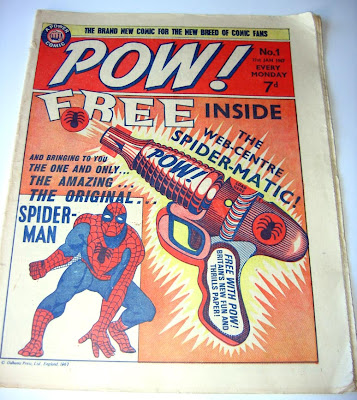 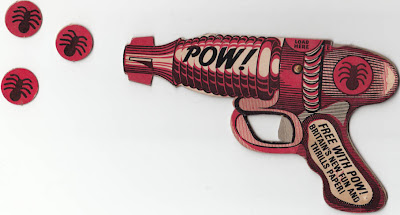 The same year saw The Topper treat the readers to The Funny Face Maker. This was a sheet of clear acetate with cartoon facial components printed on it. When cut into individual parts the reader could then assemble them into various photofit style faces. A simple idea but very amusing. 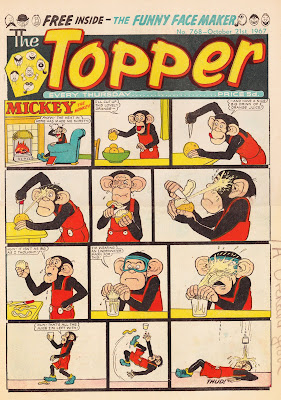 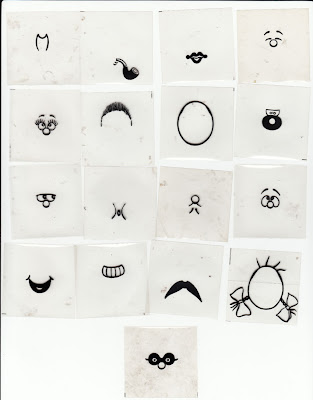 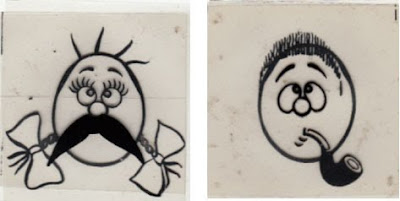 In 1968 the first combined issue of Fantastic and Terrific gave away another cardboard gun. This one not only had the gun and bullets but also included a target board... 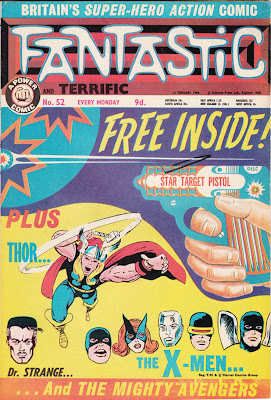 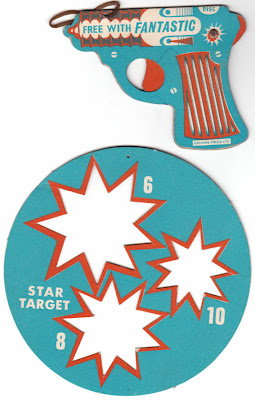 In 1971 IPC's Knockout weekly had an odd free gift; a little cardboard figure of one of the characters that you could pop into the breast pocket of a shirt or jacket so it appeared to be peeking over the edge. There were several to collect and it was pot luck which one you received. A bit of a useless free gift really, but one which a lot of people remember. 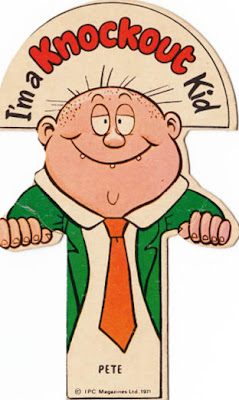 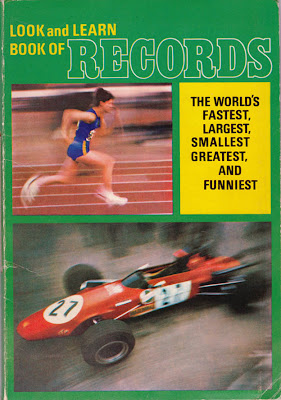 The magazine only gave away the cover of the booklet and a couple of interior sections. In order to compile the rest of the 96 page book the reader had to buy Look and Learn for a few weeks and cut out a section. Still a good gift though. I always felt that the photo below of the Limbo dancer being ogled by a bunch of beer-swilling blokes pretty much summed up entertainment of the early 1970s... 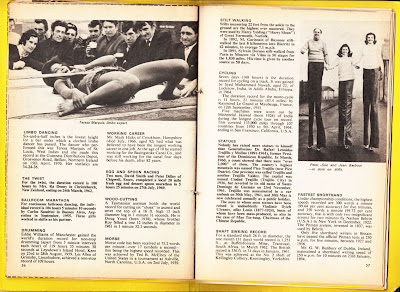 Two years later in 1973 Look and Learn offered more free gifts, such as this 16 page full colour Spotter in the Country booklet with not a Limbo dancer in sight... 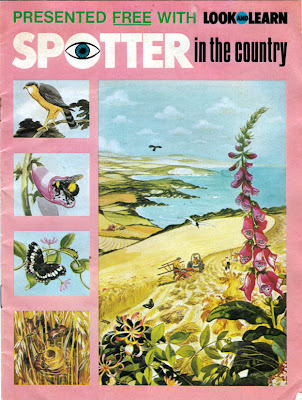 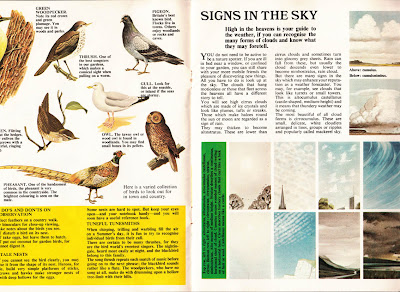 IPC launched Shiver & Shake in 1973, giving away a practical joke gift in issue No.1. In order to sell more copies there was a choice of one of four practical jokes: a trick spoon, a trick rubber pencil, fake liquorice, or a plastic biscuit. 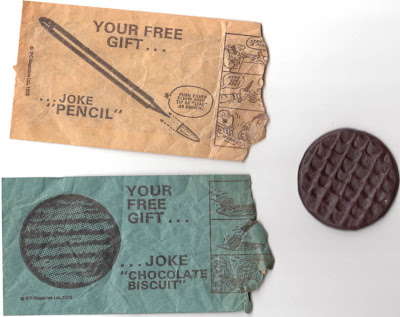 1975 saw Warlord give away an excellent 16 page booklet, Badges of the Brave along with aluminium badges representing various regiments that could be stuck into the book. Artwork by Jeff Bevan. (Thanks to Ray Moore for identifying Bevan's work.) 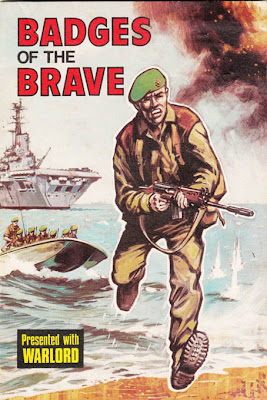 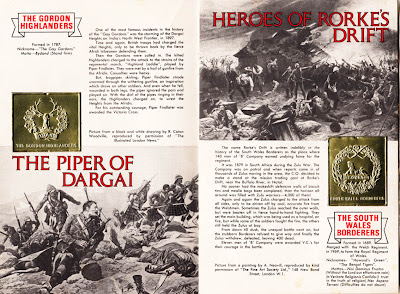 A few years later, in 1983, Victor gave away a similar gift. For Valour was a fold out card display which free replicas of medals could be affixed to. Again, the artwork is by Jeff Bevan. 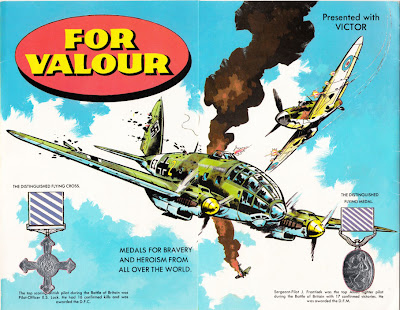 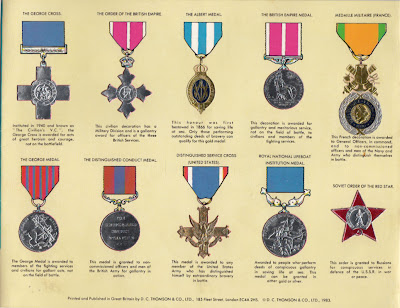 I regret that there's nothing of any substance I can add to this excellentpiece beyond the fact that I really did find it fascinating. Thank you, especially for the information about those Power comics, many of which I bought for a penny each at a Cub Scout jumble sale many years later, though without, of course, those free gifts.

The Badges of the Brave booklet from Warlord was from one of the first comics I can remember getting. I still have the booklet.

This is a brilliant series of articles! Comics usually out-lived the flimsly free gifts, so this is a really nostalgic trip even for those of us who hung on to the comics for years.

My favourites so far are the Thunder Bangers, of which I received loads over the years. Mine got dog-eared very quickly - yours look like they have been in hermetically sealed cases.

Also I had no idea that Arthur Askey ever appeared in 3D!

Are these gifts all yours from when you were a lad, Lew? I'm impressed - how did you manage to keep everything in such good condition?
Despite my derogatory remarks about plastic gifts on comics I must say you can't beat a plastic chocolate digestive for laffs!

Hi Carl,
Apart from the pre-1960s gifts and the Whampire Bat they're all ones I had as a kid, yes. Although by the 1980s I wasn't a kid anymore obviously so I didn't play with the newer gifts. I stored them away, waiting for someone to invent the internet so I could put them here. :-)

I have the Victor medals! I found a load of Victors in totally mint condition in British Heart Foundation in Lincoln, in bags with their gifts attached!
When i was "getting" comics in the 90's the gifts tended to be of the edible kind. I can remember having one of those "Gnasher Crasher" things from the Beano though, and using it to try and scare a dog that would always bark at us from behind a fence as we walked to school.
I also remember being the first kid at school with Pogs because there was a packet of them on The Beano. Who said comics aren't up to date?