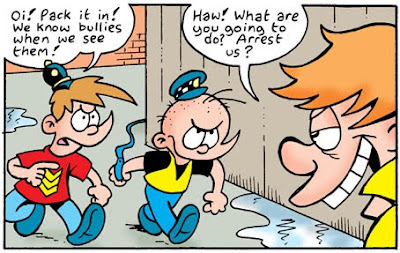 Above: A preview of next week's Kid Cops from The Dandy No.3572, on sale Wednesday 22nd February.

The ABC (Audit Bureau of Circulations) figures have just been released for publications from July to December 2011. As you may recall, the previous figures (Jan - June 2011) delivered quite a shock in regards to The Dandy, which was apparently down from 15,012 from its 2010 figures to 7,448.

There were fears that this would decrease even more, particularly as some shops no longer stock it (readers can't buy it if they can't find it) but there's some good news in that the sales seem to have stabilized. The latest figures are 7,489. A tiny increase but better than a decrease.

The issues with cover mounted toys sold above average, including the bumper Christmas issue. As distribution was better on those issues that must be taken into consideration. Getting the comic noticed is half the battle, and as some shops stuff the comics in the shelves upside down, back to front, or out of reach of children, the fact that sales have stabilized is some sort of achievement.

It's not cause to be complacent though. As production and distribution costs rise, comics still need to increase sales to survive. 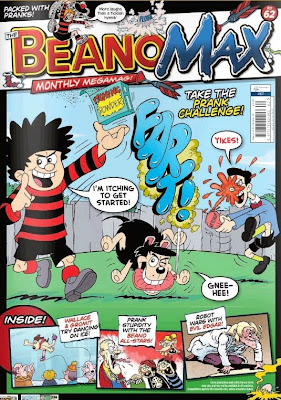 You can see the full details of all the UK comics (well, the ones that submit their data) over at John Freeman's Down the Tubes site here. It's a rewarding and well researched website and shows how sales have fallen considerably on all titles over the past five years with several titles losing half their readers over that time.

The information is visibly at odds with the notion voiced elsewhere by a couple of relentless critics who always single out The Dandy and assert that declining sales of that comic are mainly due to readers disliking the modern artwork. As sales of all comics, magazines, and newspapers have plunged over the years there are obviously other factors at play apart from content that should be considered. Therefore it's a pity that "content" is regularly pinpointed by one or two spiteful people posting snide and sometimes personally insulting comments on their blogs to try and demoralize the editors, writers, artists and readers who are actively doing something to keep comics alive.

The Down The Tubes site also carries information on sales figures of comics in the 1960s and 1970s. Back then, it was standard for an individual comic to sell a quarter of a million or even half a million copies a week! Of course that was an era before video games, computers, mobile phones, weekend adventure holidays or hanging around fast food burger bars posed a distraction from reading matter. However, the very fact that there are still several thousand kids in the UK who do still read comics is something to be pleased about.

Hmmm... i see no sales figures for Moshi Monsters and WWE KIDS. Wonder how those two are doing :)

I think the big problem with Dandy is the distribution. I tend to shop at waitrose where they sell Beano (and just seen the Phoenix comic!!). If I need the Dandy I have to go to ASDA. To be honest I think the comic is pretty good and deserves wider circulation. I took out a sub in the end.

I don't know about your ASDA but mine has the comics crammed into an area far too small for them with the Dandy right at the back, in the dark. It'd be impossible for any casual or potential new reader to discover it, and I suspect even those searching for it may give up burrowing through the other mags before they find it.

Moshi and WWE seem to be quite well distributed so I hope they're doing well. I wonder why they didn't submit figures to the ABC?

To give ASDA (Hatfield) its due - there are a lot of kiddie comics crammed together but Dandy and Beano are placed together and relatively on view (although its a along way from ideal). You have to thank my boys for showing interest (esp in Desparate Dan). Being an IPC man I weaned then on old stuff from the 70s. But the Phoenix comic has made my eldest look forward to every saturday and I started him on Beano etc on the basis of that.

It seems your comment about Viz being the best selling british comic is incorrect as Ben 10 comic/magazine sells more however I could be wrong here as I have never read it and it could lack any comic content whatsoever.

Ah, I missed that one John. Thanks. I think Ben 10 only has US reprint in it, if it features any strips, but I'll amend my post.

Mind you though, 'some' countries have video games, mobile phones, weekend adventure holidays and fast food burger bars... AND comic sales in the millions. What really needs to happen is a "bottom up" comics revolution against the cultural snobbery that persists in Britain. And that needs to come from the fans themselves!

That's a fair point Mike. However I understand that sales of comics are now suffering in those countries too.

You're right about the cultural snobbery towards comics in the UK though. It's always been the case sadly.

My local Tesco in Belfast has quite a large magazine section which is alway kept tidy no matter how crammed the shop can be at times with customers, so all credit to them. Even better, The Dandy always takes pride of place at the very bottom shelf, so it's in front of all the other comics and in a great position for the kids. It's also visible from the entrance to the shop itself.

Yes, my local Tesco also has a tidy display so good on them for having such a policy. It really makes the shop look smarter and helps the customers, which should always be a priority.

I think one of the problems is also attention. I can see things like WWE Kids being a hit because Kids watch that stuff (I'll make no comment) and i think Comics based on TV shows etc, probably do a bit better then independent ones. Also, they probably do better if people are aware of them. Where as stuff like the Dandy and the Beano mostly needs word of mouth or kids being able to see the cover and being able to get the parents to buy it, not an easy task at times.

That's not to say they don't like doing TV shows based on strips, but really, you need to be careful.. A Comic strip IS a comic strip.. when its no longer a comic strip, it's different. Might be a good version of it, but it's not the same.

Of course, it is still tricky to find some comics at times.. the old 'subscription with the newsagents' is probably still the best way.. erm.. do they still do that? I used to get Sonic the Comic from Tescos, but I remember a couple of times they didn't stock it and that was a pain, and they never stocked the Poster Mag and I couldn't find it ANYWHERE in town (boy, I hate living in such a back end town) but a number of my mags I subscribed with my newsagents so I just had to pop in and they had it to the side, OR there was the old 'through your door from the paper boy' ^_^

Without being a kid at the moment, I can't tell you if Kids still talk about comics in the payground and stuff like that.. I guess an old focus group of Kids might be useful at times ^_^

There'$ an obvious reason why Dandy's sales halved. It went weekly from fortnightly and readers had less time to buy it. Children aren't as punctual buying comics as they used to be

Fair point. I think that's part of it Stu.

Naturally some kids would hate the revamp, just as I wasn't keen on the revamps of TV21 and Smash in 1969. However I think there's something too coincidental to be true when The Dandy doubles its frequency by 50% and loses readers by 50% at EXACTLY the same time.

Readers had half the time to buy it? Even if they still only bought it fortnightly, the circulation would've stayed the same. And the extra readers it should've picked up from buyers having twice the opportunity to buy it would have increased the sales, even if only by a little. And isn't that what happened? Didn't sales increase to start with and then taper off over the next few months? Not quite at the exact same time as you say.

I don't know Ian. I've never been good at how statistics are worked out but perhaps it's the difference between dividing the same number by 26 over six months (for a weekly) or dividing it by 13 for a fortnightly?

When I spoke of "exactly the same time" I meant over the period of the averages. The first revamped issues no doubt sold better than the later ones (they had better distribution for one thing) but the ABC figures are an average.

Well, I'm a kid and I love The Dandy - I get it every week! Good news about a slight increase in sales, maybe I helped them. :-)

lets just accept that times change and so do people. i bought all the comics in the 70s 80s but my kids are into technology nowadays. i wonder if actual toy sales arr dropping yearly in favour of tablets and phones etc etc.
RIP DANDY