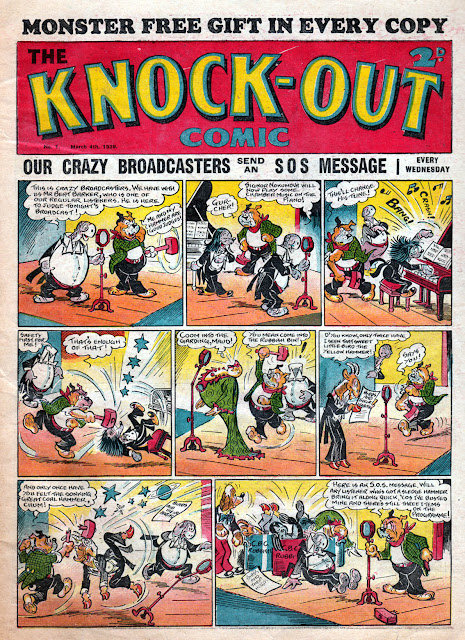 The original Knockout comic (or The Knock-Out Comic to use its initial hyphenation) was launched by the Amalgamated Press with issue dated March 4th 1939. It was clear from the outset that, like A.P.'s Radio Fun, Knock-Out was intended to be a rival to D.C. Thomson's relative newcomers Dandy and Beano. The size was similar, as was the page count (28), the mixture of humour strips, adventure serials, and prose stories, the arched logo design and the price. Knock-Out even featured animal stars on its cover to rival Korky and Big Eggo, although Our Crazy Broadcasters lacked the charm of the characters that inspired it, despite nice artwork by Walter Bell.

Inside, Knock-Out No.1 led off with Kiddo the Boy King, a sort of higher ranking Lord Snooty but not as appealing. Good art by Frank Minnitt though. Beneath it was the more original Stone-Henge Kit, who would prove to have much more longevity, running for 701 issues! Art on this first episode is by Norman Ward. 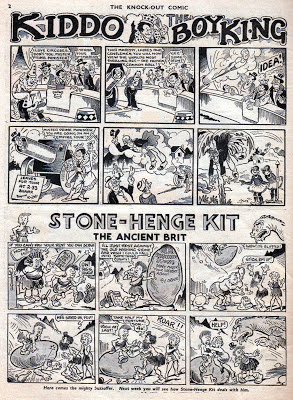 On the facing page was Knock-Out's own page three girl, Merry Margie - The Invisible Mender, drawn by Frank Minnitt. No doubt this strip was inspired by The Dandy's Invisible Dick, and I'm sure readers could see through this character as she only lasted for 34 weeks. 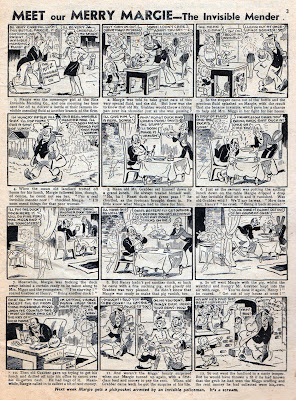 Robots (or 'Mechanical Men') were becoming popular in pulp magazines and Knock-Out had its own in the form of The Steam Man (great name). This precursor to Robot Archie was illustrated by Joseph Walker. Sadly the series ran out of steam with issue 50. 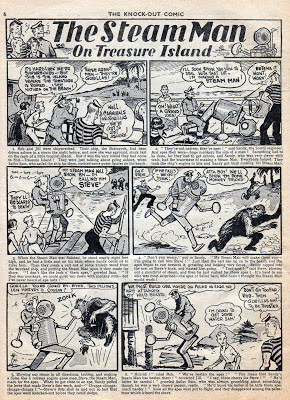 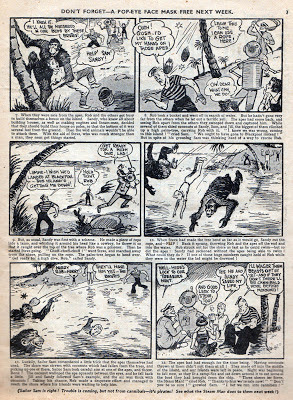 Frank Richards' Billy Bunter had been running as a prose series in The Magnet for years so it seemed a natural to feature him in Knock-Out as a comic strip. Initially drawn by Charles H. Chapman, Billy Bunter became the comic's biggest success, running in every issue (taking over the comic as Billy Bunter's Knockout at one point) and continuing into Valiant for many years when the two comics merged in 1963. 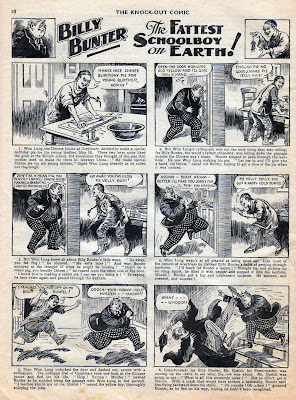 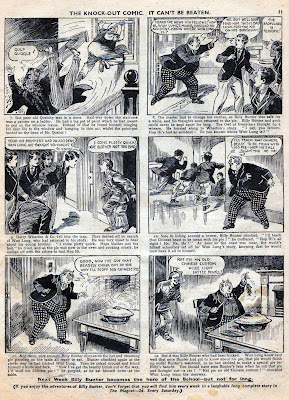 The centre pages of Knock-Out No.1 featured several short strips, including Simon the Simple Sleuth by Hugh McNeill. 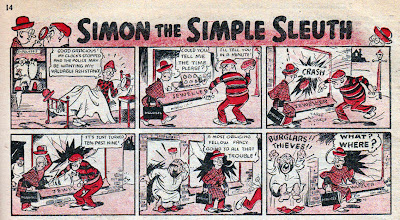 Sexton Blake was another popular prose fiction character (originating in 1893) who had a comic strip series in Knock-Out. This also proved very successful for the comic. The artwork in this first episode is by Joseph Walker. 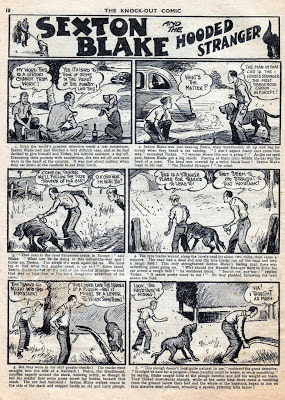 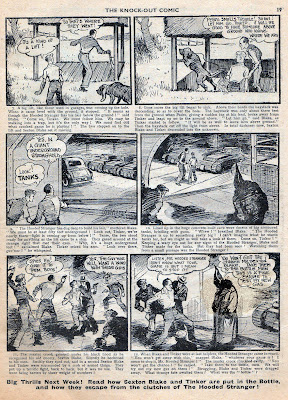 One of the best remembered Knock-Out characters was Our Ernie, Mrs.Entwistle's Little Lad. It seemed anything was possible in this strip, with the plots taking surreal turns. Later, the strip would always end with the catchphrase "Daft, I call it!" Artwork by Charles Holt originally. 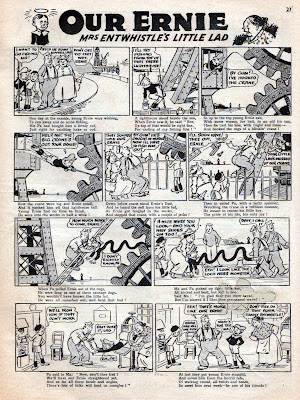 The free gift in No.1 was a Paint Box and Brush (or alternatively a bag of sweets). An ad for No.2 showed the readers what they could expect the following week; a Popeye mask, an edible pipe, and spinach made of sweets! Popeye wasn't a character in Knock-Out but he was extremely popular at the time due to the movies and newspaper strips. 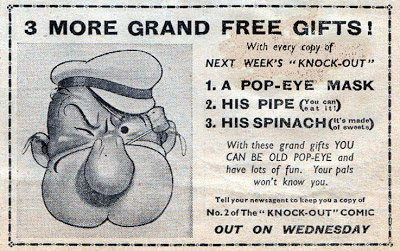 The original Knock-Out lasted for 24 years before merging into Valiant in 1963. Eight years later, IPC decided to revive the title with the un-hyphenated Knockout in June 1971. The cover strip was The Super Seven, drawn by Mike Lacey. 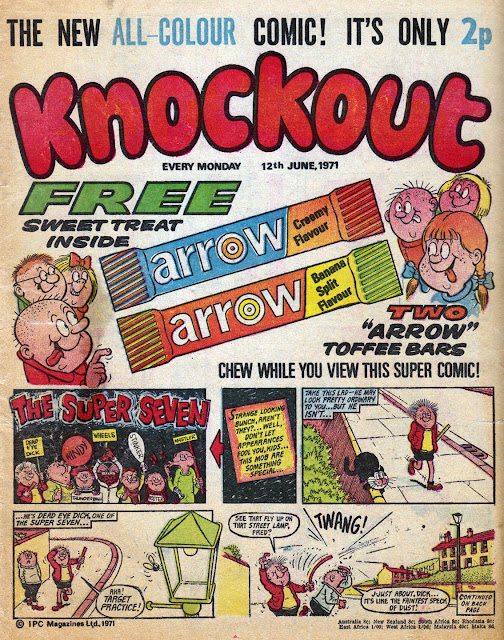 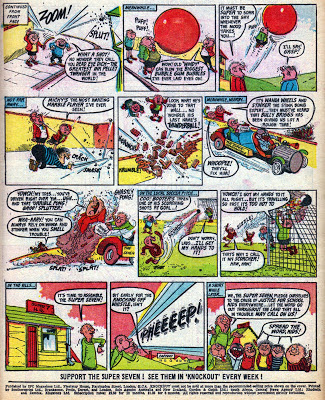 Like its predecessor, the new Knockout was again trying hard to imitate Dandy and Beano. Those two weeklies were then 20 pages for 2p so IPC followed suit with their new launch. Unlike other IPC comics of the time, Knockout had every page in colour, - albeit mostly single colours (known as spot colour) but it still looked bright and cheerful.

One of the strips I liked most in Knockout was Pete's Pockets, drawn by the prolific Mike Lacey. As schoolkids we did tend to have all sorts in our blazer pockets, and this strip took it to ludicrous, and amusing, extremes. 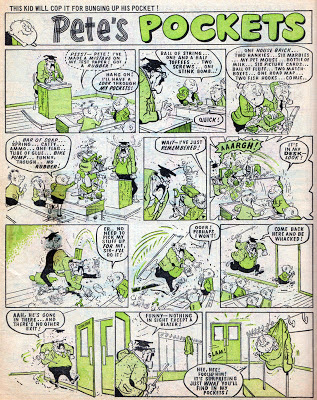 The editorial page was a bit... bland in its design to say the least, but at least the advert for the next issue looked lively. 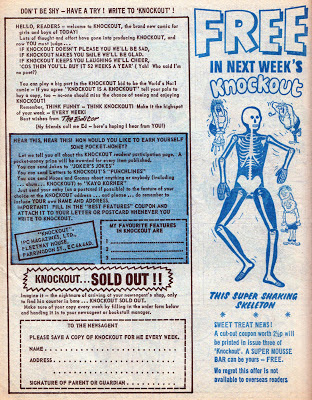 The centre spread featured The Toffs and The Toughs, drawn by Reg Parlett. Unfortunately the off-register colour doesn't do it much favours but it's an enjoyable strip and Reg's work was of course a pleasure to see. This sort of upper/lower class rivalry was always a good theme to use in humour strips. 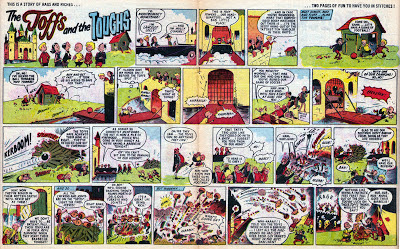 In one of its more blatant imitations of a D.C. Thomson character, Knockout had its version of The Dandy's Dirty Dick with Mucky Mick, drawn by John Geering... 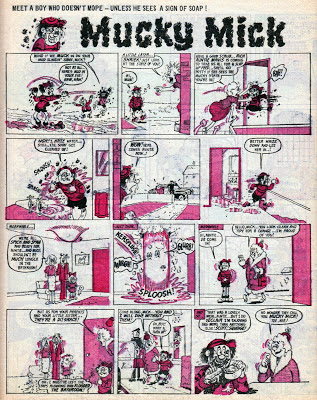 The only adventure strip in Knockout No.1 was Barry and Boing. I really disliked this strip I'm afraid, but I'm showing it here for the benefit of the many who did enjoy it. D.C. Thomson could do light adventure strips perfectly (eg: General Jumbo, Billy the Cat) but although IPC were masters of straight adventure stories (The Steel Claw, Hook Jaw, etc) they seemed to veer too far into silliness when they attempted more juvenile adventure strips. (Thunder's Steel Commando for example.) The plot of Barry and Boing is fine, but a crying robot and his annoying "Boing" sound effects? It all seemed a bit wet and made me cringe. Nice artwork on this first episode though. Mike White perhaps? 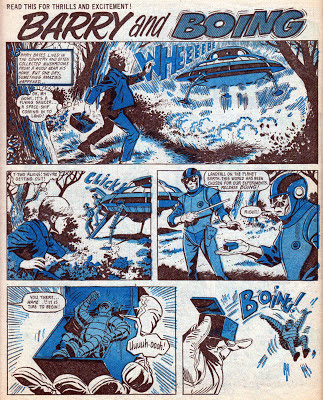 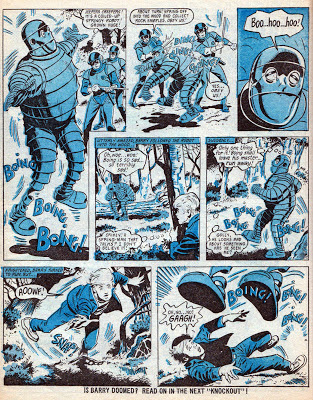 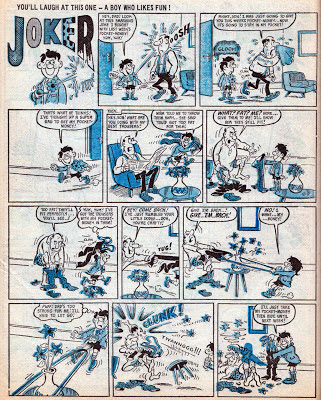 New comics always start out as 'dummy' issues before publishers give them a green light (or consign them to oblivion). Subsequently, by the time a comic appears in print, using the dummy strips for its first issue, its artists may not be available to draw following issues. I think this may have been the case with The Katts, with this first episode drawn by Leo Baxendale but taken over by other artists from issue two. 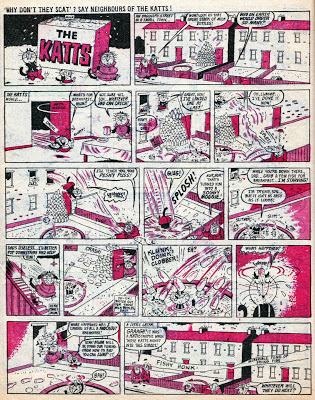 The new Knockout didn't fare as well as the original version. After just two years (106 issues) it folded and was absorbed by Whizzer and Chips.

Comparing the two versions of Knockout it's evident how comic styles changed between 1939 and 1971, just as styles of today are often different to those of the 1970s. Yet the objective of comics always remains the same, - to entertain!
Posted by Lew Stringer at 02:01

Stone-Henge Kit, eh? And if I counted right, that strip lasted until 1953. I guess that explains why Alf Wit the Ancient Brit only lasted two issues because getting dropped from the Beano in 1947. The editor probably noticed it was a rip-off and axed it.

And wow, you're not kidding about Knock-Out copying the Beano and Dandy - that logo is the exact same colours as the Beano's. Good thing they changed it before long. Deed a Day Danny took the cover by issue 40, so Our Crazy Broadcasters must've been a total flop.

A new Leo Baxendale strip one off to enjoy...

I love the Our ernie and Deed a day Danny later on in Knockout...

Deed-a-Day Danny was in from the beginning but I haven't shown every strip/story that was in the issue.

James, I think The Beano editor would already be well aware of what was in Knockout when he commissioned Alf Wit. Perhaps he just used it as a filler.