The Beano and the Fourth Wall (Updated) 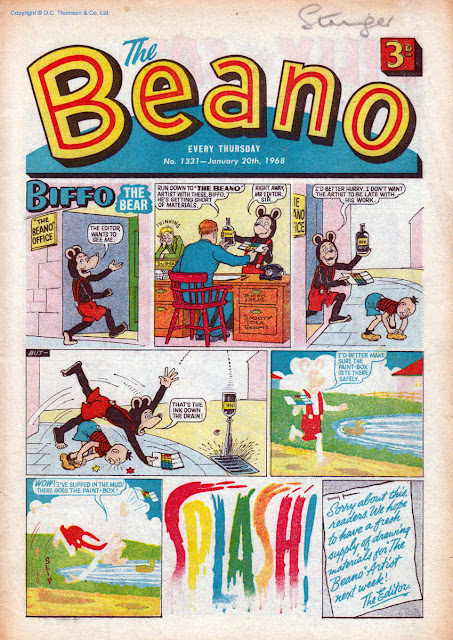 As every Beano reader knows, the comic has had a very long tradition of what's known as "breaking the fourth wall" in which the characters, aware that they exist in a comic, often address the reader directly. The instances of this are countless, and have often been seen in many other comics too of course.

However, comics sometimes go a step further, making this "breaking of the fourth wall" even more surreal. Here's an example above, from The Beano No.1331 (January 20th 1968) where Biffo's entire world is jeopardised by him losing the very inks necessary to his existence!

I would guess that artist Dudley Watkins drew the whole page in black ink as usual, leaving the Beano production office to eliminate the black from the necessary panels after they'd done the colour overlays. Which means that somewhere in the Beano archives the original art to this page would feature the ink lines that were never published. (Perhaps it'd make a nice extra for a Beano 75th special next summer?)

Almost two years later, in The Beano No.1432 (Dec.27th 1969), a similar device was used at the end of The Bash Street Kids story. Artwork by Dave Sutherland... 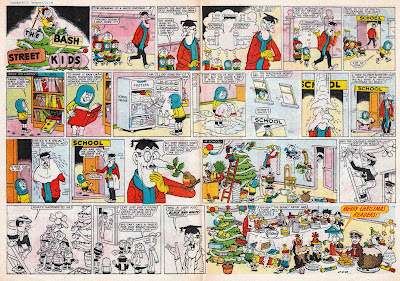 ...and as that was the Christmas 1969 issue I thought you'd like to see the cover as well. See if you can guess who sent the cards. (Update: Answers in comments section.) 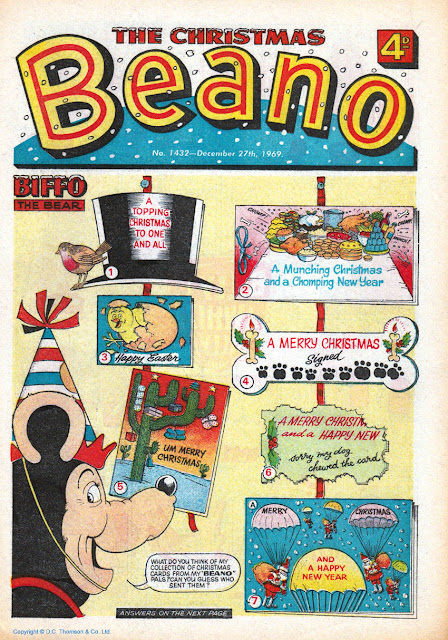 UPDATE: I'd almost forgotten about my favourite surreal Beano cover of the 1960s! This excellent Dudley Watkins cover from issue 1270, November 19th 1966. The concept absolutely fascinated me when I was seven, and I still think it's an amazingly bizarre idea to use on a children's comic. Biffo not only breaks the fourth wall, he rolls it up! I think this was the moment when I realized that you could do anything in a comic strip. (Apologies for the yellowed condition of this one. I didn't start looking after my comics carefully until a few months later.) 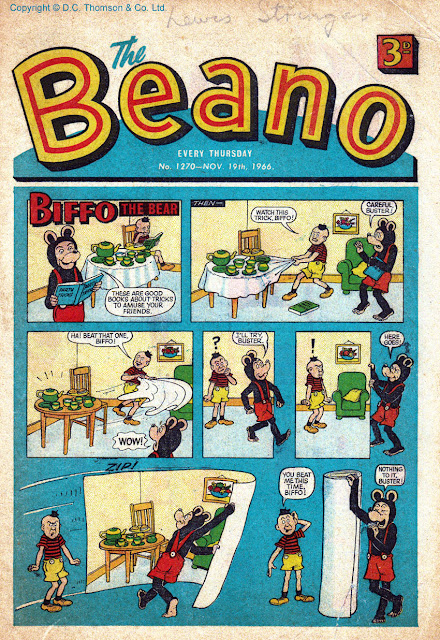 That Biffo story is sheer brilliance!

As for the cards...
Lord Snooty
Fatty / Fatty Fudge (or did he come later?)
Dunno (The Bash Street Birds?)
Gnasher
Little Plum
Dennis, or possibly Sidney
And General Jumbo

Oops. I had another look at No. 4, and realised it was Pup Parade.

I know every card except number 7! Hmmm... thinking cap on!

No one person has them all right yet I'm afraid but if you compare notes...

What great fun that was...

I remember the Beano annuals and they were always complaining being coloured orange or green...
wonder if the artists also wanted colour and it wa s aslight dig and a request...

You were almost right, Peter!

Everyone's almost there so I'll spare any more head-scratching. The printed answers in the comic were:

Thanks for taking part!

Doh! Dennis AND Gnahser! I was so confident I had it too!

speaking of colour, or paricularly the lack of colour; its funny how the bash street kids characters' skins never had any pigment every issue...

In that first Biffo thing, the editor has two drawers. One says "Biffo Ideas", but the other says "Snooty Idea Germs"... What's that all about?

Also, I remember a Bash Street Kids story from the early Nineties were they were jealous of Dennis, as he gets to give away free gifts on his page. Toots then explains that they give a free gift EVERY WEEK on their page - the staples in the middle!

From the phrase 'a germ of an idea' presumably, as in the initial concept before it's fleshed out into a story. Odd to see it written as 'idea germs' though.

Anon, the absence of skin colour was a standard way that Thomsons would indicate white characters back then. It was the same on the Dennis strip on the back cover, and on characters in The Dandy. A money/time saving exercise presumably. (AP's TV Fun and Knockout did the same in the 1950s.) The covers of The Beano were the exception to the norm in that they used pink flesh tone for characters.

very methodical, but very simple stories that convey a lot of charm, so different from the pretentiousness that was paramount the past 2 years in the dandy comic paper!

Which bits did you find pretentious? The slapstick comedy or the jokes about bogies and bums?

The fact it even thought it was funny. That's pretty pretentious.

Slapstick comedy is not pretentiousness and jokes about bogies and bums are often just a crutch for a lazy writer or artist. I was pointing out that those stories you featured were well crafted in both story and art, an in-joke in some ways, but one which anyone can enjoy. They were not groundbreaking; we seen similar ideas from pioneers harvey kurtzman in the 1940's comics or chuck jones in animation and probably unsung creators prior. But, such covers by talented craftsmen would invite readers in to further explore the comic, unlike the blob art used on most covers in the last incarnation of the Dandy. The Dandy would have to have relied on eye-catching covers for sales, since it did not have merchandise and freebies promoting it.

Nigel Parkinson drew most of the covers. Once you start calling work of his high standard "blob art" you lose any validity your other comments might otherwise have.

The Dandy was aimed at children. (You sound older than its intended readership incidentally.) Many of those children DID find it funny but, as always, humour is in the eye of the beholder.

Back on topic Lew I noticed that The Beano cover about the colour came immediately after that Billy the Cat cover you showed us previously. A good time for The Beano!

I certainly was not referring to Nigel Parkinson's cover art or his interior work, nor would I include your work in the category of my previous comments.

I'm just trying to follow your logic, anon. You blamed the "blob art" cover artist for low sales, for not inspiring readers to "further explore" the comic. Now it seems you were thinking of an artist who didn't draw most covers, which kind of defeats your theory.

I can see your point about a more traditionally drawn cover being more appealing... to our generation. But today's kids are more used to a more abstract style in cartoons etc, so comics are bound to reflect that, just as they always have reflected changing art styles. Bear in mind that The Dandy's sales were falling when it was a more traditional comic. Staying on that course would not have saved it either.

You are right, I did not see every cover. I did get tired of looking at a middle-aged, bald guy with glasses every week, no mater how well drawn he was. I did take note when his prominence was reduced (the character, not the artist).
To be honest Lew, traditional artists such as Dudley Watkins was before my time, his style seemed even old fashioned for the 1960s to me, but I recognise his draughtsmanship. I may not appreciate his style as a comedic style say of Leo Baxendale, but he; Watkins could certainly DRAW! His work has a fluidity to it and conveys the story even if there were no word balloons. I just see it as a whole, the quality of craftsmanship. It is a contrast on the surface with say, Davey Law. Law's loose style conveys energy, vibrancy and anarchy. His world has no foundation in perspective or anatomy. But it was the perfect medium for his characters such as Dennis the Menace!

A winning formula is the merging of the right drawing style and writing style to produce characters and stories with real personality and marketability. Unfortunately, there is no formula to produce the right combination. As in most things in life it is hit and miss. So yes, the Dandy was right to try so many styles on the cover and the interior pages. Unfortunately, for a number of reasons it did not result in a hit! But who knows, maybe this digital Dandy can capture kids imaginations or maybe the Beano can reignite the sales of comic papers as number one in a field of one! Maybe the Dandy's time will come again... its about being in the right place at the right time...

I take your points although there's a couple of things I'd like to respond to. People always quite rightly hold up the work of Dudley Watkins, Leo Baxendale and Davey Law as the best of comics. But they were ALWAYS the cream of the crop, even back then. Few artists have ever come close to their achievements (and I'd add Ken Reid to that list too).

Perhaps instead of constantly pointing to a handful of artists as The Way To Do Comics, readers might judge modern artists on their own merits? The truth is that many readers DID like the work of contemporary Dandy artists. Yes, some new artists are more skilled than others, and such has it ever been, but what some lack in technical skill they make up for in other areas. If a humour strip amuses its audience, it's worked, regardless of perspective or figure drawing.

Secondly, I'd argue that Davey Law was very accomplished at perspective indeed. Perhaps it wasn't evident in his work a few years before he died but some of his 1950s pages display remarkable skill in that area.