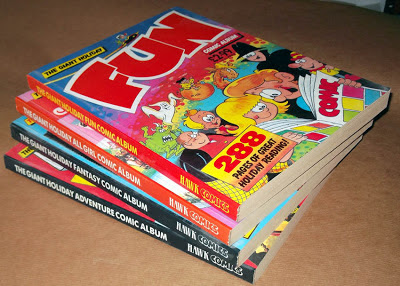 Every now and then discussion about these books crops up on forums and suchlike, with people discovering copies of one or all of them in charity shops, comic marts etc. Readers often express their curiosity about the books so I thought I'd take this opportunity to clarify some background info about them.

Back in the 1980s Mike Higgs (known to many of you for his creations The Cloak and Moonbird) was producing books for Patrick Hawkey's company Hawk Books. Mike would edit and design the books himself, and usually came up with the concept as well.

In 1989 Mike had the idea of producing four comic album compilations. These would not be slick collector's volumes but would instead be chunky, cheap softbacks aimed at children for the summer holidays. The idea being to give them a nice long read over the school break whilst introducing them to some classic material from the archives of British comics.

Through an arrangement with Fleetway Publications, Mike set about selecting material from the collections of himself and others that would be suited to the books. Four books were to be produced at the same time, each with 288 pages in black and white, and each with their own theme. 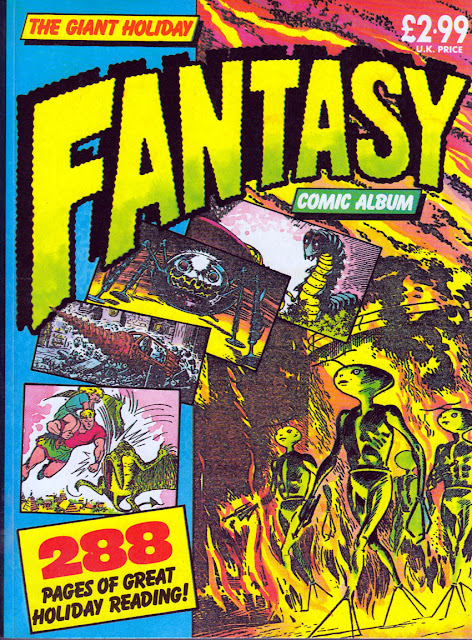 Mike Higgs designed the striking logo for the cover, and the illustrations were sourced from some of the strips within, with colour added for effect. The contents included material from the 1950s to the 1970s, including Thunderbolt Jaxon, Janus Stark, Robot Archie and Simon Test. 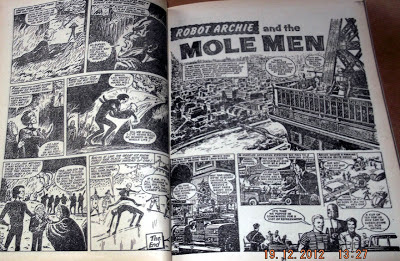 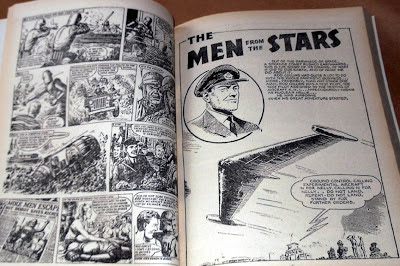 Perhaps the most impressive story in this book is the complete Return of The Claw serial about the Lextrons taking over the minds of children. This epic ran in Valiant for almost two years and the full 94 page epic is collected in this book. 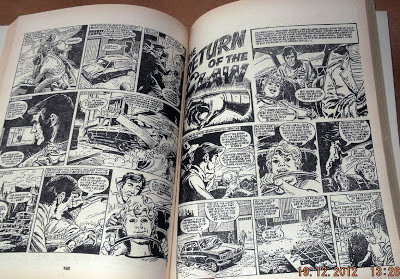 With a cover drawn by Mike Higgs this book is a good compilation of some of the best humour strips to have appeared in British comics. Mike includes several of his own Cloak and Space School strips, and there's also classics such as Laurel and Hardy, Denis Gifford's Steadfast McStaunch and Sammy Sprockett, Georgie's Germs, The Stealer, Me and My Shadow and more. There's even an all-new Mike Higgs strip at the back of the book, Henry the Hedgehog Goes Travelling. 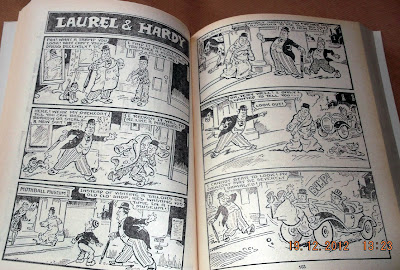 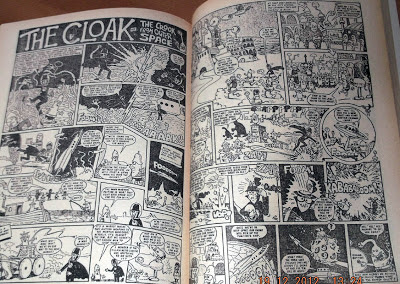 Fans of Ken Reid will be pleased to hear that the book contains the first serial for Queen of the Seas in full. 24 pages from the early issues of Smash! 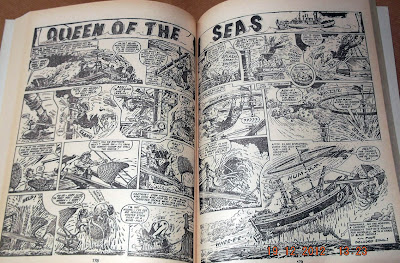 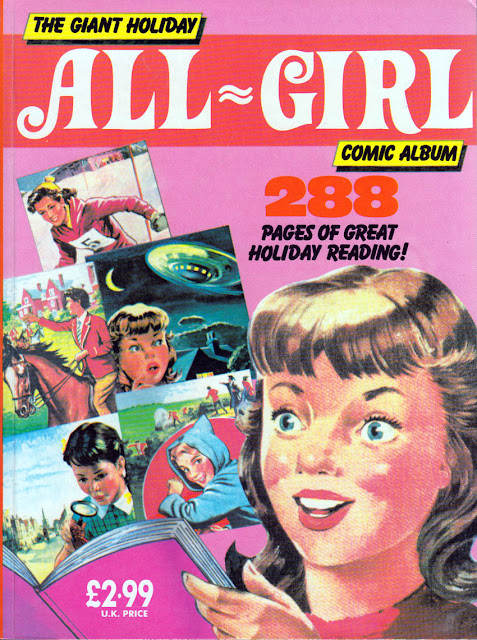 Most of the material in this book seems to be from the 1950s and taken from various Fleetway pocket library titles. Characters include Sue Day, The Silent Three and others. 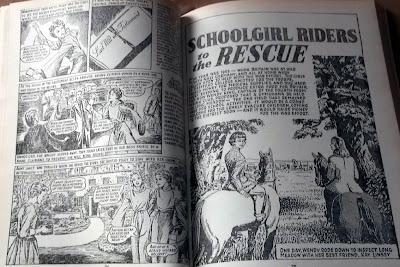 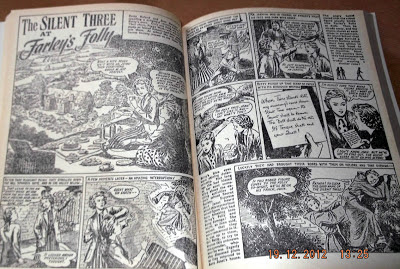 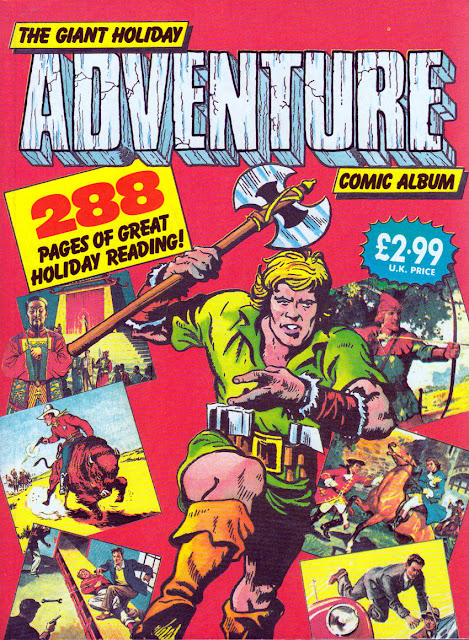 With another logo design lettered by Mike Higgs, this book features several of the non-fantasy Fleetway heroes such as Robin Hood, Master of the Marsh, Sexton Blake and Dick Barton. 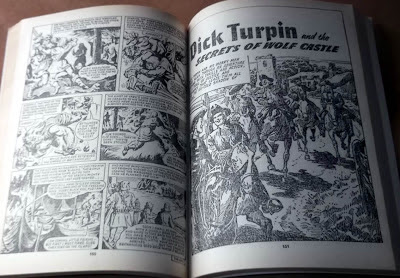 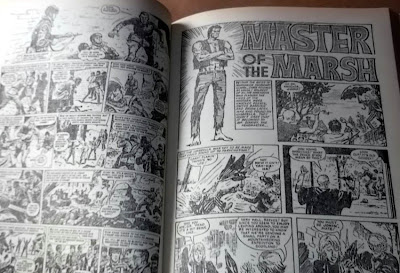 As with the All-Girl book, the focus is mainly on the 1950s and much of the material is from pocket libraries. A Dick Turpin issue and The Island of Fu Manchu are reprinted in full. 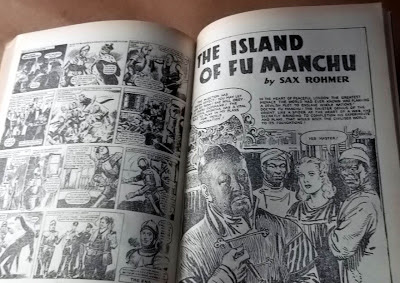 The four books were launched with a very reasonable cover price of £2.99 each. Mike Higgs and his assistants had worked hard to a tight deadline in order to have the pages scanned and cleaned up from often yellowing original comics. The results are impressive, but there was one big letdown, - the print quality was poor. The chosen print company was more used to producing colouring books and had never printed comics before. In many areas the solid blacks had reproduced too grey and patchy on the pulp paper, and detailed work such as that of Ken Reid and Jesus Blasco was badly served by the cheap reproduction.

On the plus side, the pages that had been enlarged from pocket libraries didn't look too bad as the larger reproduction helped considerably. Also, even on the worst affected pages it was still possible to follow the strips, and the lettering was legible. It's a great shame that such a worthy effort was hampered by such poor reproduction but if you do chance upon any of these books they're still worth picking up. In more recent years IPC have shown little interest in reprinting anything from their vast archive, even to the point of selling off the original pages, so, as things stand at present, it's unlikely that similar books to these will see the light of day anytime soon.
Posted by Lew Stringer at 15:04

Great article, Lew! I've just gone and bought a copy of the Fun Comic Album volume. I'm really after the Fantasy volume but it's not on sale at present.

I'm sure one will be available eventually, David. Meanwhile, I hope you enjoy the Fun one. Some good Cloak stories in there.

I didn't know about these. I wouldn't mind tracking down a copy of the Fantasy one.

Wow. This is fantastic. I've also just bought the comic album. The Ken reid strips sold it for me but it will be great to read through the other strips. Lew can I ask - do know of any other specials / albums which have large(ish) collections of the great Ken? Cheers, Andy

I wouldn't mind getting hold of the Fun Comic album, but that will have to wait now until the new year.

At present I can't think of any other book that has so much Ken Reid material in it Andy.

I have all four of these, and i highly recommend them to anyone interested in British comics. I'd especially like to sing the praises of The Giant Holiday All-Girl Comic Album, which is packed with great artwork.

There's a few copies of the Fun album on Amazon for 1p at the moment...

Cheers Ken. Thx for this post though - I've got one of the annuals winding its way to me. Incidentally I got my old shiver and shake annuals out of the attic today to read to my boys. I didnt release but they reprinted a lot of the Ken Reid Frankie Steins - in particular annual 1974 which is bookended by 2 colourised strips.

Well I got delivery of the Fun Comic Album and what a belter it is. Choc full of Cloak strips - which is great as I have a few recently bought Smash issues and have eyed this strip for reading at a future point. The art looks fantastic. The Queen of the Seas stuff is brilliant and I note there's a Frankie Stein Reid strip as well as a classic Nerves one (which you covered a while ago). I've also spotted a Banger and Smasher strip which appears to be by Reid? Not sure which comic this would have been taken from. In all a brilliant find - thxs very much for this Lew. And like others I'll be watching for the other albums as well.