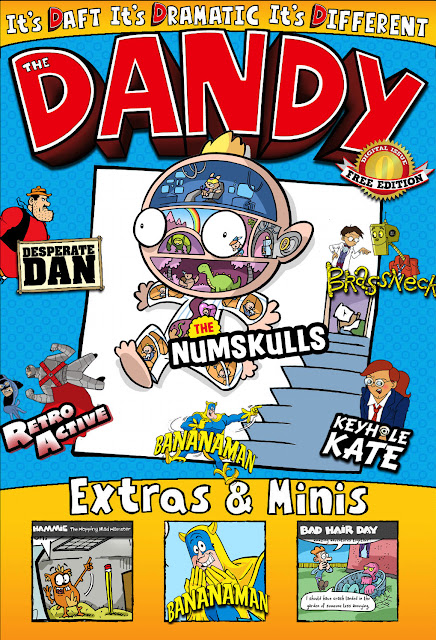 Hours before the last physical issue of The Dandy arrives on newsagent's shelves, the new Dandy website went live at midnight, revealing details of what to expect from the digital Dandy!

Desperate Dan! Brassneck! Keyhole Kate! The Numskulls! Bananaman! Some with retro looks, some with an all-new restyle! Plus brand new mini-strips such as Bad Hair Day and an intriguing new superhero adventure strip called Retro Active which looks like it might include a revival of Mister X, The Dandy's first superhero from the golden age of comics!

All exciting stuff. Unfortunately the strips wouldn't load properly on my ancient Mac so I can't give you any more info I'm afraid, but I'm sure other blogs and websites will be reviewing them today.

Email ThisBlogThis!Share to TwitterShare to FacebookShare to Pinterest
Labels: Digital Dandy, The Dandy

Time to cut down on the pies and buy yourself a new PC.

Doesn't load properly on my laptop.
Not the most encouraging of starts...

I don't think the problems are just cause you got a mac.. sadly, alot of the site coding seams to be half-complete right now.. and some of the code is just.. weird and pointless (why is the footer over 3 pages?)

I'll be trying to pick up the latest issue either today or friday, by the way

I have a newish android tablet and the stories won't load on that either. I was looking forward to the superhero strip.

Not sure about the motion comics, but it might be what the intended audience are looking for.

On a web design/coding level, it seems rushed, with most pages not fitting in an average monitor size (usually due to the designers working on huge monitors) hopefully these drawbacks will be ironed out in time.

I'm glad someone can see the strips anyway. mce, which system/device are you using, if you don't mind me asking?

I'm able to view them using Google Chrome on both a Windows XP PC and a Mac running on OSX Mountain Lion.

It's all HTML5, so Safari, Chrome, Firefox and IE9+ should be able to view the comics.

Didn't work on any.

My computer is also old Lew...so couldn't scroll to see the whole picture of the dummy issue..

I agree its madness the Dandy sells now...it might of continued!!!!!!!
Maybe a retro Monthly could start..

I've finally got it working...very slow and jerky...But at last..

I had to reduce the size of the screen to see the arrows to move it along..

the dummy issue shows a lot of potential as everyone learns what you can do...it can only get better...

I would still prefer to have the option to be able to print it out...

I got the pages to load OK (Debian Linux, KDE and Chrome browser) but the motion comic idea is a bit naff. :(

If that's what the Beano/Dandy apps are like on the iPhone then I'm not missing anything... :/

Certainly not impressed by Issue 0 - I can't understand why they decided the jolty animations were a good idea - the whole thing doesn't look very professional and only works sometimes.

I really wish the pages were like a normal comic layout - this new layout just looks off-putting - but hey, that's my opinion.

Plus, my copy of the last ever Dandy ordered from the website didn't turn up today!

According to http://dandy.com/accessibility it should work on

I personally use Chrome 23.0 on Windows 7, and it works fine.

Just tried it on an old Mac laptop using Safari 5 and the first panel of each story loaded but it couldn't get past that. The Bananaman jokes worked ok though.

Does anyone know if it works on an iPad Mini?

Zoom out if the arrows aren't showing up.

I still can't get anything of note.. Site code appears a complete mess too..

Wonder if there is a work at home job going for web designer...

Jerkily-animated "motion comics" have never been good. If you're going to make good animation, why not just make a cartoon? If you're going to make bad, jerky animation, why not just make it static pictures?
I think Scarlet traces was originally envisaged as a web-only motion comic... which collapsed halfway through and ended up being released in an innovative "battery free" paper format. The backlight was terrible though.

Couldn't get it to load the actual comics on my Google Nexus 7 tablet with Android 4.2. I got the 'play' screen, but that's about as far as it got, and even that was pretty unwieldy and hard to read as it wasn't resizing nicely. :(

James, it's not a case of not seeing the arrows. When (if) the first panel loads, clicking on the arrow makes no difference. Nothing happens. It doesn't load the next panel. It almost fades to the next panel, then stops, no matter how many times I try.

Understandably it can't be easy designing it to work on every system, past and present, so there's bound to be teething troubles. I'm sure it'll be worked out soon because it's a worthy idea deserving support.

More like a last gasp desperate idea because the comic didn't sell.

Well, digital comics are a growing area so it makes good business sense for them to give it a try, no?

Depends. If it succeeds yes, if not no.

Anything's better than giving up.