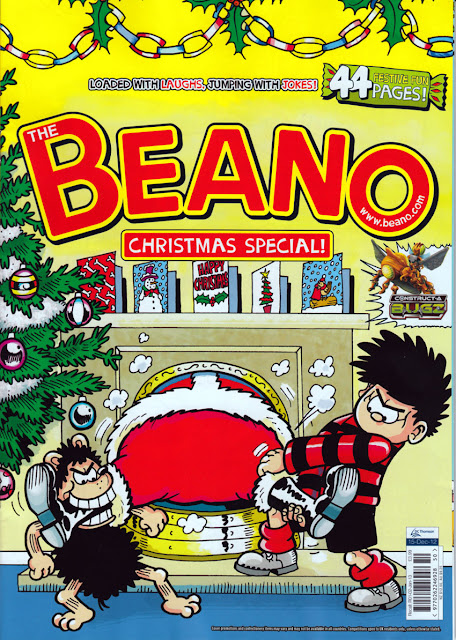 Yes, it's the week when the Christmas issue of The Beano is published and it's in the shops now with a bumper 44 page issue plus a set of 'Party Pranks' (and a bag of Haribos) for £3.99. As you can see from the cover above, it's billed as The Beano Christmas Special and carries no issue number, but in truth it's No.3665 of the regular series. (Although the plastic bag it comes in carries the number 3664. Hey, mistakes happen.)

Inside the comic there's a double helping of Dennis the Menace drawn by Nigel Parkinson (who also did the cover) and a selection of seasonal strips including an excellent Dave Sutherland Bash Street Kids. (Dave's been drawing the strip for 50 years, - which also means 50 Christmas strips of course, - but he still manages to add little details and visual gags that make the strip still feel fresh.)

Another good thing about this issue is that it contains no reprints! I doubt this trend will continue in the New Year but who knows? 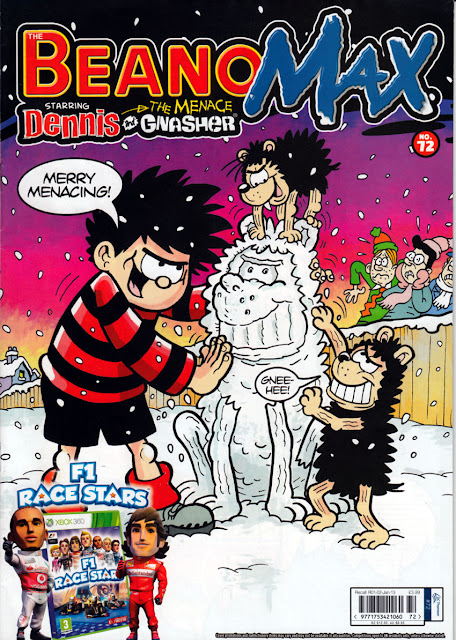 Also out now is the Christmas edition of The Beano's companion comic BeanoMax. It features a nine page Dennis the Menace strip by Nigel Parkinson, a seasonal feature drawn by Dave Sutherland, a puzzle page by Jamie Smart, and various activity pages. 40 pages plus gifts, for £3.99.

As they carry gifts, both of these comics are bagged so here's what to look for on the stands... 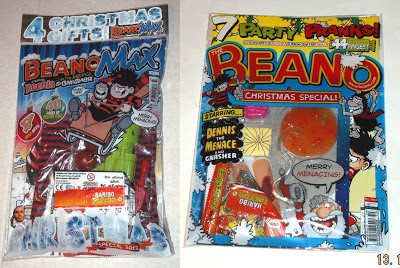 These are the last issues that will appear this year (they'll be back on January 2nd) but we're already hard at work on issues for 2013. I've drawn a few more Rasher mini-strips for The Beano and I've just done artwork for a new BeanoMax feature which has... but that would be telling!
Posted by Lew Stringer at 22:47

The BeanoMAX felt like such a waste of money when I got it - only a 9 page Beano All Stars story and a Bananaman reprint, it really was a disappointment.

The bagged issues really don't look nice, do they? It's a shame that some issues now come in these bags but I suppose it is Christmas and Christmas means gifts!

I think this is the first ever year when I've preferred the BeanoMAX Christmas cover to the Beano cover. But both are a massive improvement on the mess of the summer.

Nothing could really compare to the 2011 Christmas Beano cover, but at least it's still considerably better than 2010.

The 1970 Christmas Beano cover was always one of my favourites, although I've a soft spot for a few of the 1960s ones as well.

Re:BeanoMax, Harry, there's also a two page Bash Street in this issue plus a puzzle page. I think there's new artwork on some of the activity pages too. Not packed with strips admittedly but I suppose the idea was to put more activity pages in this one for Christmas. If I was 8 I'd probably be very pleased with it, just as I was with all those cut out Beano puppets back in 1967 every week.

No snow on the logo's (of the actual comics anyway) :(

I wonder if The Phoenix will do it? They said they couldn't possibly spoil any details in a Facebook comment XD

A lovely issue. My eldest boy has just turned 6 and really likes the Beano. the Xmas issue seems as special to him as it did to me all those years ago (altough I didnt regularly get the Beano - but rather the IPC humour comics). Anyway a good issue , altough a little sad we have no Xmas Dandy (sniff). I may dig out some of the Xmas Shiver and Shakes I have for tomorrow.

Nice to hear that your son likes the comic, Andy. That's the age when comics are fresh and a door to another world. Cynics may say that today's comics aren't as good as the old ones but the true golden age of comics are the ones each generation grew up with.

Anon, I thought it was supposed to be fake vomit but I've no idea why it's circular.

I think The Beano has really improved under the new Beano editor...the stories were great and zany...loved Nigel's one where Gnasher talks and Dennis enjoying his over the top presents..great to see nigel back as the Dennis artist for the Beano...some nice panels..I like the shadow of Dennis about to snowball a policeman..

its fun spotting the Bad lads by Malcolm Judge last week we saw ball boy in Billy Whizz...lovely nod...if you're in the know...loved the Bad lads robbing a policeman!!

Baby-face was very black and funny as well...

The Beano has got a lot better..
as you say David sutherland is still brilliant..

Lew you deserve to draw rasher as awhole page;0)

Another question about the party pranks pack: what's the purpose of the wiggly transparent thing with a sort of propellor shape at one end?

I think it's supposed to be used to fake a runny nose but it seems to be set in a peculiar shape.