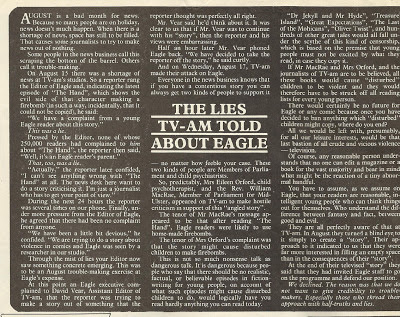 My thanks to Andy Luke for sending me this clipping from Eagle dated 17th September 1983. It makes for very interesting reading! It concerns an incident when TV-AM broadcast an attack on IPC's Eagle weekly on claims that it might be a bad influence on certain children.

As you can see, the editor (Dave Hunt? Barrie Tomlinson?) was clearly furious at such an accusation and his editorial delivers a well reasoned response to TV-AM's story, pulling no punches. What's particularly impressive is that Eagle treats the readers in a mature fashion on an equal footing. 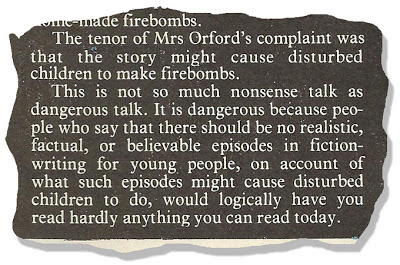 The irony is that IPC always went out of their way to try and make sure the stories and artwork was suitable for children, especially after the controversy that Action caused in 1976, but TV-AM still desperately rooted out something they considered to be a bad influence.

Anyway, click on the clipping to enlarge the image and have a read for yourselves of this fascinating piece of comics history.
Posted by Lew Stringer at 01:13

Email ThisBlogThis!Share to TwitterShare to FacebookShare to Pinterest
Labels: Eagle

Now if I won the Euro Millions and gave the British comics industry the kick up the backside it needs, I'd do the same thing in my own titles. I'd probably even start a weekly comics magazine which treats all comics from all countries equally (Naruto is supposed to be ending soon - doubt it got more than a tiny mention in Comic Heroes, I'd give it the cover!). But it would also have a "nonsense articles about comics from around the world" section picking up and ridiculing stupid newspaper articles, with little flags next to them. I suspect the union jack would feature almost exclusively.

Well, it's comforting to know that self-regulating journalists will never indulge in such underhand practices ever again.

interesting though.. I would very much like to see what TV-AM said to balance the view point a bit ^_^;

I think TV-AM's points were covered in Eagle's response. Sounds like the old scaremongering technique from the media just to fill airtime.

Really intresting to see, I'd like to see the original tv footage, although its probably no longer around.

Pity the reporter was forced to make news out of nothing, and to attack an industry already struggling to be heard above new distractions such as video games...

It was Dave Hunt. We had a chat about it.

Willie McCrea is still around - Martin McGuinness kicked him out of Mid-Ulster in 1997, and he resurfaced in South Antrim in 2005.

His attitude may be related to his being a Free Presbyterian minister.

The TV-am footage probably does still exist. http://www.tv-am.org.uk/company-history says "The video library of TV-am programmes was sold to various archive companies. It is now managed by AP Archive http://www.aparchive.com"

Wow! I remember reading this...