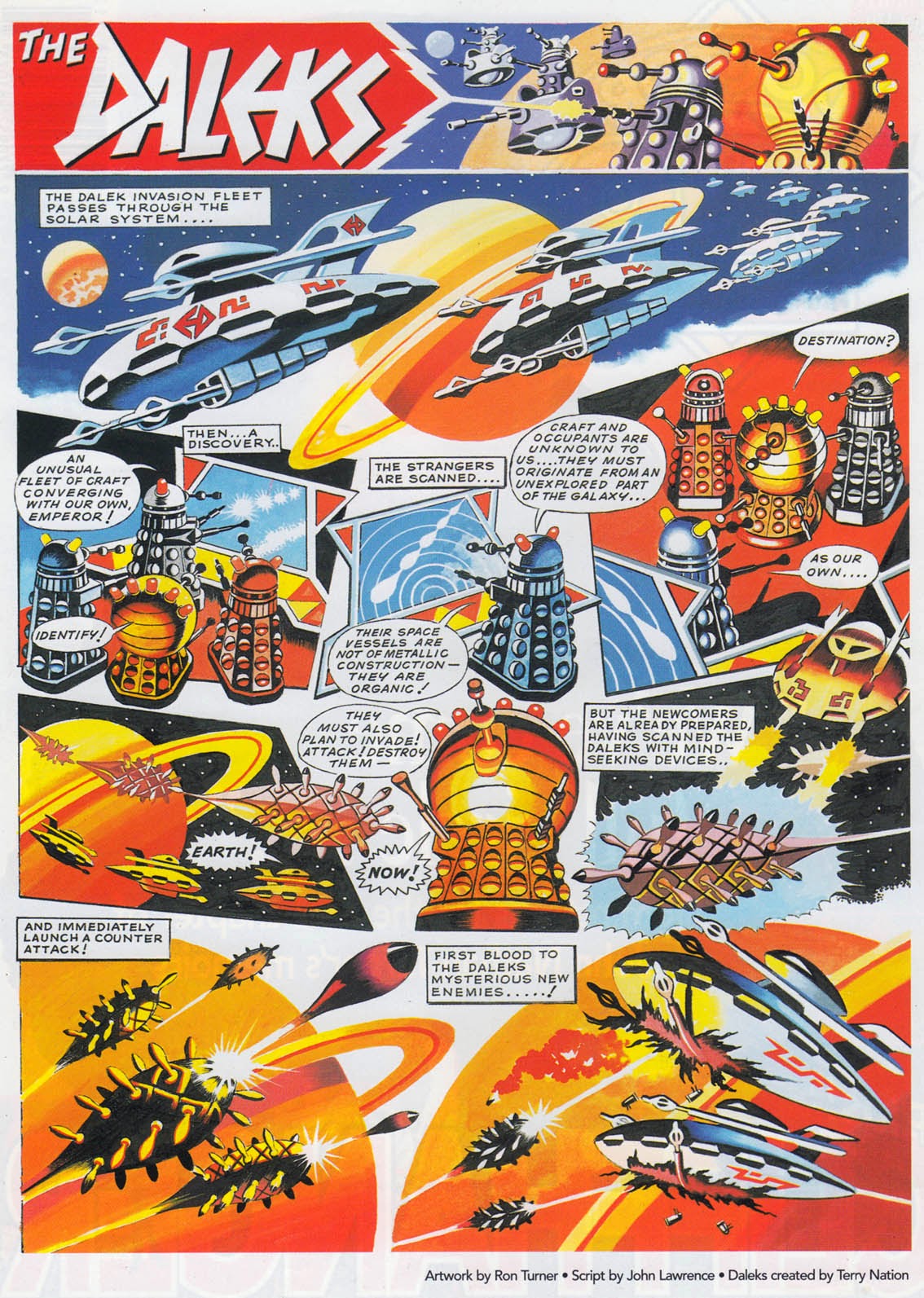 Starting in Doctor Who Magazine No.249 (12th March 1997), The Daleks ran on the inside front cover for six issues. It was written by John Lawrence and illustrated by veteran artist Ron Turner, who had been one of the original artists on the TV21 strip. Some of the Dalek figures were a bit 'off model' but it didn't matter, - Ron Turner was still producing stunning artwork even at 74 years of age! 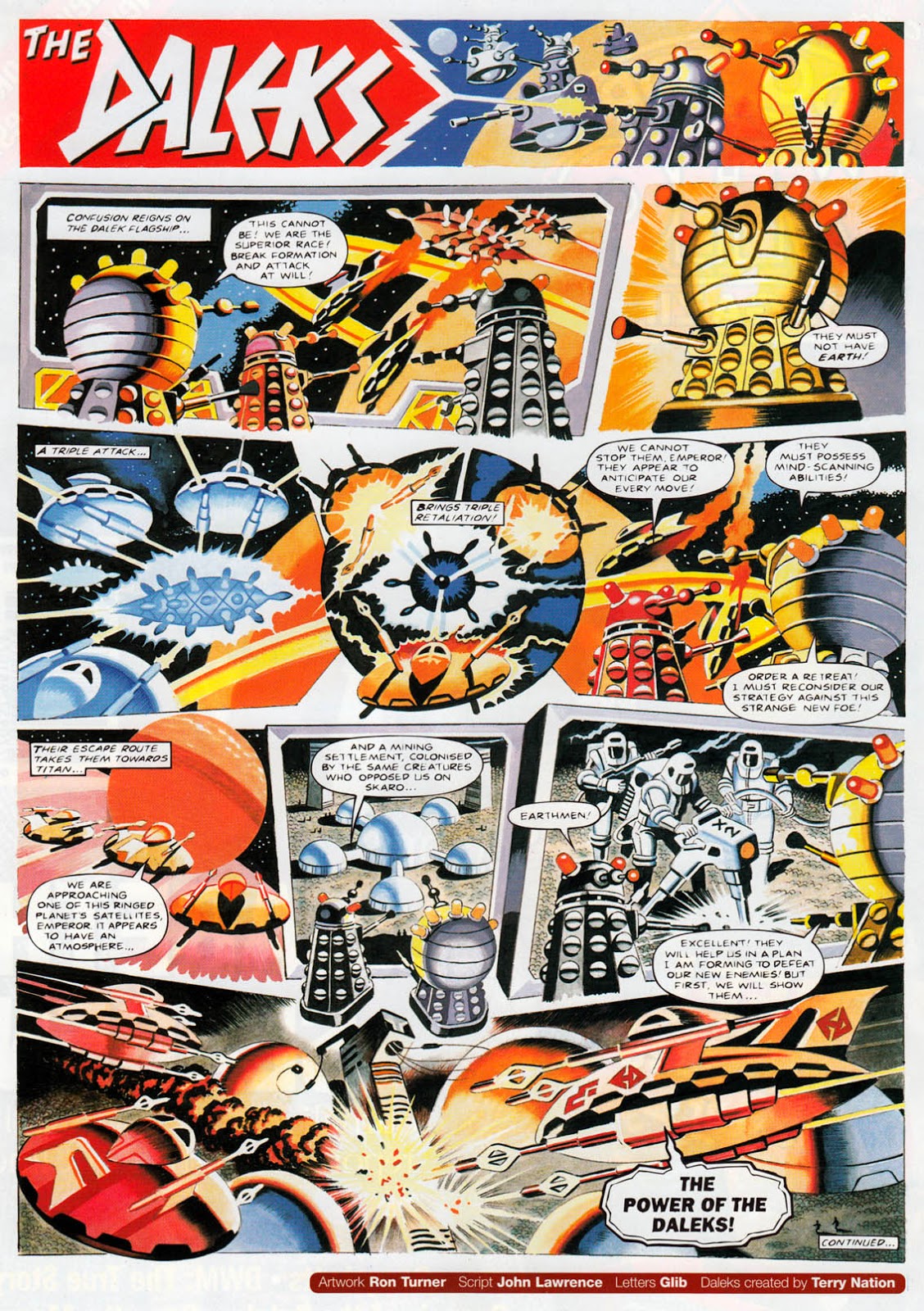 Here are the first two episodes of the revived Daleks strip. It's a shame it didn't run for more than six issues, but the fact that a new series of strips happened at all is something to be thankful for. The comic series concluded in a similar way to how the original TV21 run had, with The Daleks intent on reaching Earth, presumably acting as a prequel to the 1964 Doctor Who TV adventure The Dalek Invasion of Earth.

Sadly, Ron Turner passed away in 1998, just 18 months after this run of strips, but his work lives on for fans old and new.
Posted by Lew Stringer at 00:16

Email ThisBlogThis!Share to TwitterShare to FacebookShare to Pinterest
Labels: Daleks, Doctor Who Magazine

Good to see that Joh is putting out collections of Ron Turner's "Space Ace" - third issue in the works, John Ridgway tells me. I'd love to try and get a collection of the Daleks strips sorted but it would appear others have tried and failed, which suggests to me that the costs against potential revenue don't stack up and someone in the mix is being greedy...

Panini reprinted a few classic Dalek TV21 strips last year in a Doctor Who Dalek special they published. Shot from the original art too. It would be good if they could republish the whole run though. It's been 20 years since Marvel UK published that 108 page 'The Dalek Chronicle' so there's a generation out here who have never read the series. Considering how influential the strip was on modern Doctor Who (Dalek saucer designs etc) I'm sure today's kids would love it.

I have to say, the Dalek Emperor/Pansy Potter amalgamation is... surprising.

Gosh, is it really 20 years since I got my copy of "The Dalek Chronicles" ?

I don't suppose by any chance you're planning to post the other 4 episodes?

What some of you may also be unaware of is that I wrote a sequel, which could have led onto many more adventures before the DALEKS actually invaded Earth - the 'lost adventures' if you will - but Marvel turned it down! Yes, despite this new story coming second in the DR WHO readers poll for 1997 with a script and artist ready, they still turned it down! Even after Ron had produced two striking pages of the second story as an inducement, they still turned it down! What were they thinking? Unbelievable! However, the story has now been completed by DR WHO artist, Lee Sullivan and will eventually appear in the 3rd issue of Gareth Kavanagh's DR WHO tribute magazine, VWORP VWORP # 3 in the coming months. In the meantime, as John Freeman informs, I'm keeping Ron Turner's memory alive with reprints of his classic SPACE ACE strips, now gloriously coloured by John Ridgway, with Vol 3 out next month.

That is stunning artwork Ron Turner. Even the collected reprints of these fetch good prices compared with issues without.
As you'll already know many artists are still working in their '70s.

Thanks for your comments, folks.

Brendini, - You're right! It's definitely The Strongman's Dalek.

Liz, - No plans to scan the other four parts. I have to be careful about copyright. A few pages are usually fair use 'for review purposes' (and posted with the publisher's blessing in some cases) but running a full series or a complete comic is a no-no I'm afraid.

John, - Thanks for that fascinating piece of info! It's strange that Marvel UK chose not to run your next strip. Could it have been a problem regarding payments to the Terry Nation estate perhaps? I'm glad to hear it will finally see print, and I can think of no one better suited to completing it than Lee Sullivan. His Daleks are great! (Send me info on SPACE ACE to lew.stringer@BTinternet.com and I'll be happy to plug it here.)

Digi, - Yes, Ron Turner was indeed one of the best!

I am sure a number of people would love to see all the spin off strips reprinted. I would certainly be queueing up to buy a copy. Perhaps in the same way IDW reprinted the Dave Gibbons Who stories in that amazing HC format. Well, one can dream. Great post Lew and love the new strip in this month's DWM. And yeah, some things should never "go digital" ;)

THANK YOU, JOHN LAWRENCE, for letting us know that your Countdown to Destruction story is FINALLY going to see the light of day! I remember Ron's unlettered artwork for the first 2 pages in TDWM and even tried coming up with some lettering for it myself, just for fun! Really looking forward to seeing your story as it should be!
I WOULD NOT HAVE TURNED YOU DOWN!!!!

Thanks Traveller. Yes, it'd be nice to see all those back-up strips from the old Doctor Who Weekly collected too. Perhaps a problem with rights?