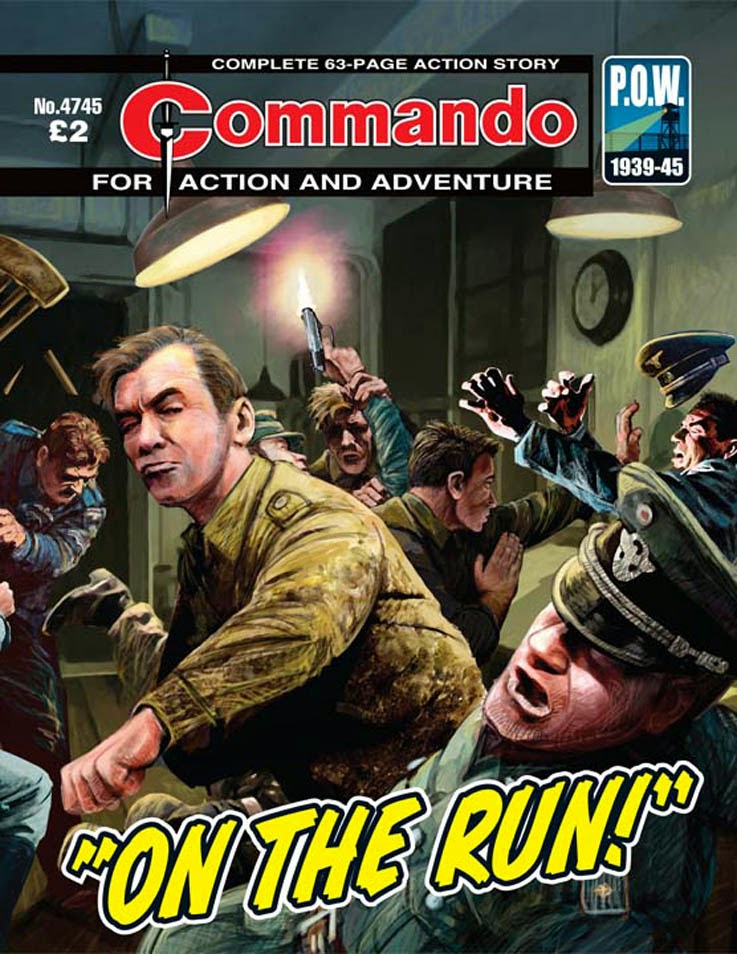 Every other week four issues of Commando go on sale and here are the previews for the latest batch. In newsagents on Thursday. Thanks to DC Thomson for the images and press release. Here we go...

No, you’re not seeing things, that is a Sopwith Camel scout attacking a Ju 87 Stuka. But surely, you say, they’re planes from two different wars, their designs nearly 25 years apart. Surely they would never have met in combat.
Well, yes and no.
How this unlikely pair came face to face takes a bit of explaining. It’s the story of a warrior’s…
RETURN TO THE SKY

Commando No 4744 – Scourge Of The Desert

The Sign of the Scorpion was their badge, and soon the Germans learned why…for the men of the Long Range Desert Group would fight as long as they drew breath. Their raids were as fast as the sting of the scorpion, and twice as deadly!

The sub-title “the toughest desert rat of them all” would seem to sum up this story very neatly but there is a lot more going on here than just a lantern-jawed British hero beating the beastly Jerries. There are at least two other battles going on alongside that struggle.
Gordon Livingstone’s crisp interior artwork — with Zip-a-tone shading in amongst the black pen work — marries excellent detail work along with dynamic figures to match the frantic mood of the action.
Ken Barr’s cover work does what it always does — makes you want to open the book. And as you’ve done that, it’s worked!
Originally titled Single Fare To Tobruk, this is classic Commando at its finest.

On the retreat to Dunkirk, Sergeant-Major Mike Fletcher had hooked up with a trio of individuals separated from their units. Eventually they were captured and became POWs.
However, Mike saw some potential in this down-trodden and uninspired bunch. The Sergeant-Major was determined to turn them into proper soldiers once and for all!
First, all they had to do was escape…

When Johnny Peace was called up to the army he refused to fight, refused to kill anyone. And he was branded a coward.
So he went to war as a medical orderly. Not for him guns or grenades — his only weapons were his medical satchel and his courage.
A coward? Not Johnny Peace. There was probably never a braver man in the British Army!

Although Medical Orderly Johnny Peace (yes, really) is our eponymous No-Gun Hero, he is all but upstaged by a magnificent mutt — the fierce but noble Alsatian called Satan (yes, really).
There have been a few fighting dogs in Commando’s long history. Memorable canine “tails” (sorry, at least one pooch-related pun is compulsory) have included “Wagger’s War” (No 1106), “Billy’s Best Friend” (No 3938) and “Hounds Of War” (originally No 67, re-issued late in 2013 as No 4664).
So, “Fetch!” a cuppa, “Sit!” back and enjoy the story of a devilishly heroic hound.