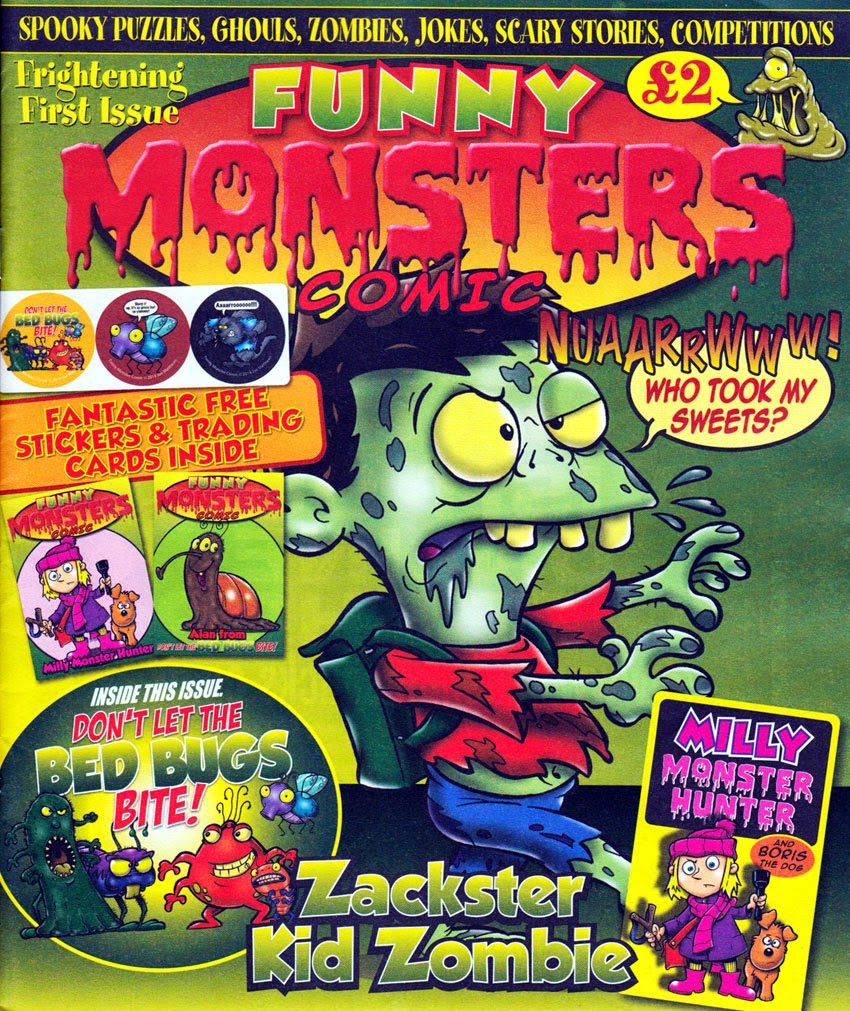 Who says British comics are dead? Certainly not long-established cartoonist Joe Matthews who has put his time and effort into independently producing his own new children's comic which will be available in selected newsagents from this week. Funny Monsters Comic is the title, and it features a mixture of strips and puzzles with all-new characters, all created and illustrated by Joe himself.

The strips are:
Zackster, Kid Zombie, featuring the 'life' of a young zombie. 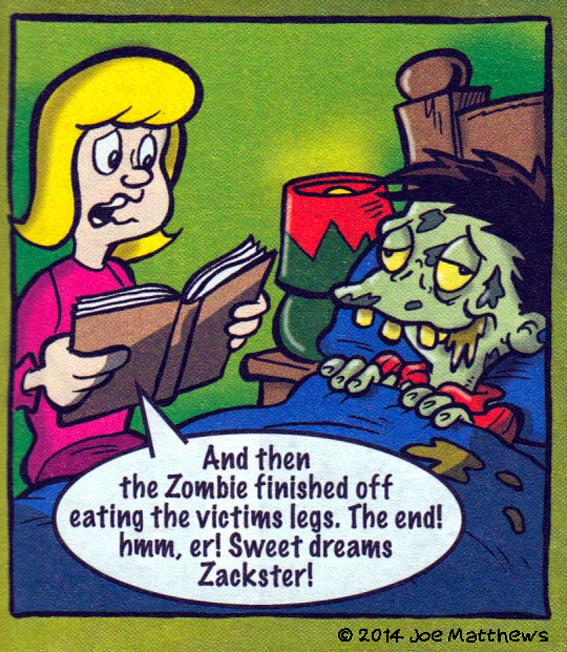 Don't Let The Bed Bugs Bite! featuring the critters that live within a grubby teenager's mattress. 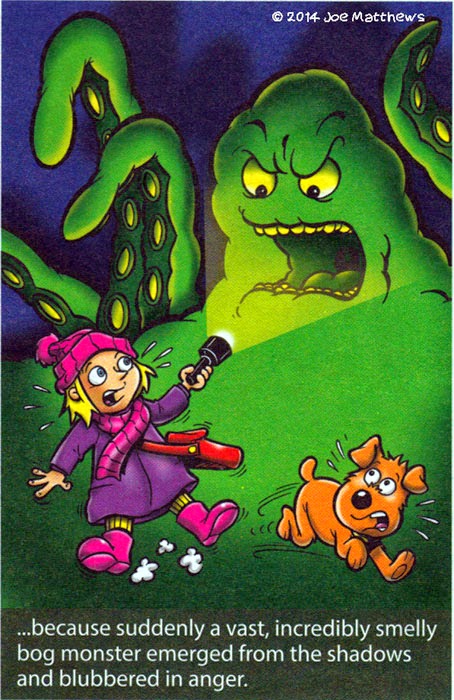 Werewolf Growl, - a boy who becomes a werewolf. 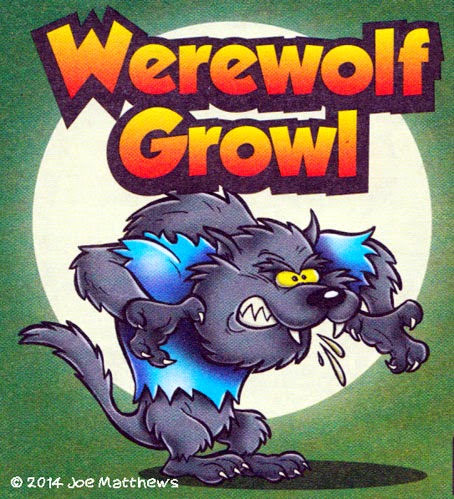 It's a fairly even split with the contents, with puzzles and activity pages taking up half of the comic. It's a slim publication, - only 16 pages, - but is bagged with two trading cards, stickers, and sweets. Priced at £2 for an independent comic, that's a reasonable price.

So how can you get hold of a copy? Joe explained:
"The comic goes out next week and will be in around 3000 corner shops around the Midlands and North West. People can also send a message on my Facebook page if they want one and I can send them one without the sweets for £2 inc postage."

Issue 2 is scheduled to be a Christmas issue but for now let's give the first issue our support. It's easy for critics to bemoan that comics aren't what they used to be, but here's a guy who's actively doing something to try and change that, with a brand new title that's not all 'filler' and not based on a toy/TV/movie.

New comics for children are a rarity these days, especially ones from an independent publisher, so I hope comic fans (and their kids of course) get behind this admirable venture in order to keep it going and for it to develop.
Funny Monsters Comic No.1, - on sale this week!

Let's hope it's a success.

Yes, time will tell. They're doing their own distribution too, so it's a lot of work and well worth supporting.

It's too bad none of the old comic publishers are interested in producing comics now. This could have been something that IPC or D.C. Thomson might have published if they were still interested in other things than glossy magazine tat.

Anon, you make it sound as though there aren't any UK comics left! DC Thomson are still producing regular comics. Check out The Beano Commsndo, Epic. Then from other publishers there's The Phoenix, 2000AD, Judge Dredd Megazine, Viz.... Plus strips in various mags.

UK comics aren't as healthy as they once were admittedly, but they're not extinct yet.

Lew,
When you say "corner shops" does that include newsagents such as McColls? I live in the Midlands and I would like to give this comic a go!

Look like something that would be right up my kids alley, Thanks for the head up Lew, I will be will they post over here and let you know the verdict!

I don't know. I'm just going on the info Joe gave me as quoted in the article. I'm presuming it means local newsagents as opposed to retail chains.

Thanks Hibernia! Strangely, your comment arrived after I replied to Anon, even though you posted it first, so my reply is out of sequence. Hope your kids like the comic. It's a slim issue but a promising start.

There's also a new story paper called Storytime out, at a whopping £4 an issue (and no crap toys stuck to it, either... wait, maybe that's a good thing).
It's aimed at very young readers, and re-tells old fairy tales, though with new illustrations (I recognise some Phoenix styles in there, and one of them is in that "red nose" style that's knocking about today. I think it originated on the art / blog / far-left propaganda site Tumblr).
I doubt I'll be buying it regularly, but I got issue 1 just to have it. I'll do a review, erm, one day...

Thanks for the info, Mike. I haven't seen a copy of Story Time but I've found the website:

I haven't seen this new comic anywhere. I asked in all the usual places, Sainsburys, Tesco, Smiths etcetera but nobody's heard of it.

Joe, Funny Monsters isn't available in those places. As I said, it's only being distributed to corner shops. Small newsagents. Not retail giants. And only in the North West and Midlands. They're distributing it themselves so its availability depends on when they reach your shops.