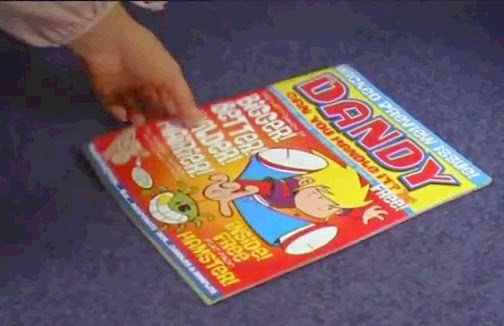 In 2004 sales of The Dandy were continuing to fall so it received quite a drastic revamp with a new logo, more pages, glossier look, new design, new strips, etc. DC Thomson even splashed out on TV advertising (something comics had given up on in the 1980s). Here's the ad...

Sadly it didn't stem the fall in sales faced by all comics. Nor did the next revamp in 2007 (to Dandy Xtreme) or the final revamp in 2010, but each attempt should be applauded for at least trying to improve the situation. And at least it went out on a high with the creativity and variety of its last two years.

(Incidentally, whoever posted that ad to YouTube made the mistake of thinking it was advertising a 75th anniversary relaunch! It was definitely for the 2004 issues.)
Posted by Lew Stringer at 22:13

Ha, I remember that advert...

You're right. Thanks for reminding me of that ad for Lawman of the Future. I think that was a one-off advert though. (Perhaps issue 2 was also advertised. I'm not sure.) I think there were one or two TV ads for 2000AD around that time too. It was very much a rarity though, compared to the days when every new comic and free gift issue from the big companies would be advertised on TV.

Just remembered a Dandy advert was doing the rounds in the Nineties as well... It doesn't seem to be on YouTube, but it had Dan playing rugby (or American football?), and was played every time there was a free lollipop on the cover.

It's a shame VHS machines weren't more widespread "back in the day", it'd be fun to see all the old comic adverts on YouTube!

I must have missed that as I stopped watching children's TV around 1974. Thanks for the info Ryan.

Perhaps it was just IPC who stopped doing them. I remember Bob Paynter telling me in 1986 that they considered TV ads to be a waste of money as sales of comics no longer justified it. Apparently although they gave the promoted issues a huge boost, the sales plummeted with the following issues, so they were often left with lots of unsold copies. They felt they could gauge their print runs better without TV ads. Sadly, OINK was the first IPC comic not to be promoted on TV, which I don't think helped its fortunes at all.

Look-In was one comic that received lots of free advertising on TV of course as it was published by ITV originally. There are several TV ads for Look-In on You Tube.

Egmont did a short TV ad for Toxic in the early days. It used to be on You Tube but I can't find it now. Some of the ads from their website are on there though.

The only comic I can remember being advertised on TV was Captain Britain in 1976 but I already knew about that. My very first Marvel comic was Planet of the Apes No.5 and I wish I'd seen POTA advertised on TV as I wouldn't have missed the first four issues - I was a huge fan of the TV show and would have snapped up the Marvel weekly from No.1 if I'd known about it.

I think Planet of the Apes (and Dracula Lives, which was launched on the same day) were both advertised on TV, Colin. Perhaps not as often as other comics if you missed it.

Thanks again, Ryan. Seems publishers didn't quite give up on TV advertising altogether then as I'd been informed.

I've said this elsewhere but wouldn't it be great if Thomsons and other companies would compile all their old 1960s and 1970s ads online? Or even better on DVD? It'd be hardly worth their time and effort of course for the few who'd be interested but it would be nice to see.

A YouTube channel wouldn't hurt, and probably wouldn't cost much either. Stick all the ads on there, all the Bananaman cartoons, the two Beano videos, that weird Dennis puppet show from the 1980s, the two Dennis cartoon series that there's been since then, appearances on Arena and Comics Britannia and Blue Peter and so on... It could work!

It'd be nice to see, but the staff are busy enough as it is and I can't imagine DCT paying outsiders to do it. Still, stranger things have happened...