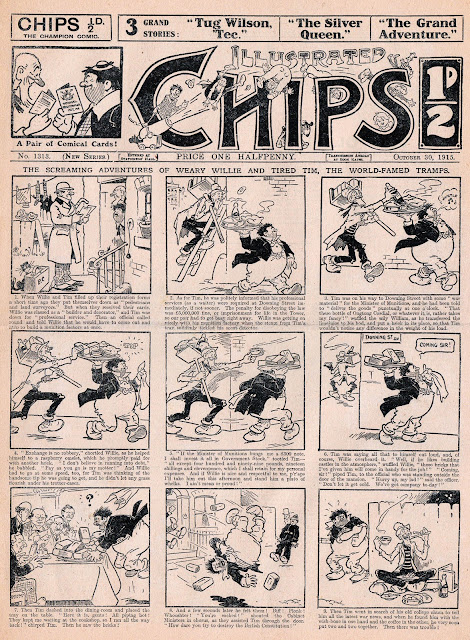 With no mention of Halloween (as the custom wasn't a big thing in the UK then, and was probably still frowned upon by many) here are a few strips from the issue of Illustrated Chips No.1313, published 101 years ago this week in 1915. The Great War was raging, and there are wartime references in the strips, but Chips was a light distraction from worries of the horrors of the front line.

As ever, the cover stars were Weary Willie and Tired Tim, drawn by Percy Cocking, who would illustrate the strip until the comic's final issue in 1953!

The format of Chips was the then-traditional 8 page tabloid; half prose stories, half strips. The centre pages featured tightly packed sets of short strips and cartoons. Here are a few of them. (I'm afraid I don't know who illustrated them but if I find out I'll add credits.) 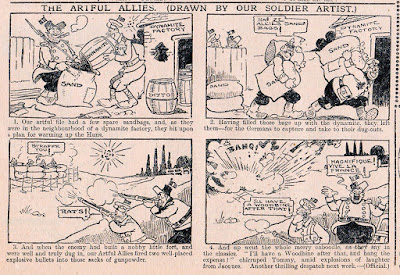 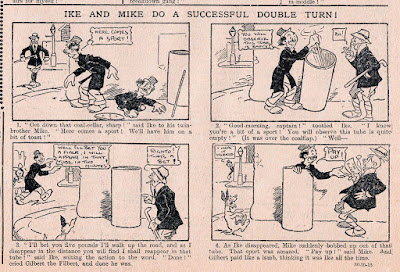 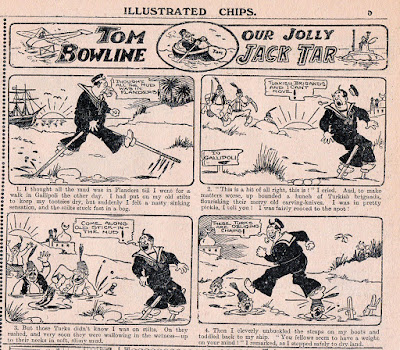 The adverts in the issue suggest that Chips was still aimed at all ages at this time, with an emphasis on the older reader (an advert for a rupture cure!). The Charlie Chaplin Fun Book was a compilation of his strips from The Funny Wonder by Bertie Brown, plus new cartoons. So the 'comic album' or collected edition is nothing new! 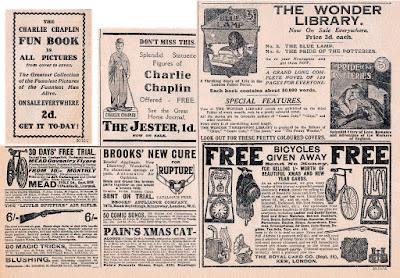 On the back page, the eternally popular Casey Court drawn by M.C. Vietch, plus various mini-strips. 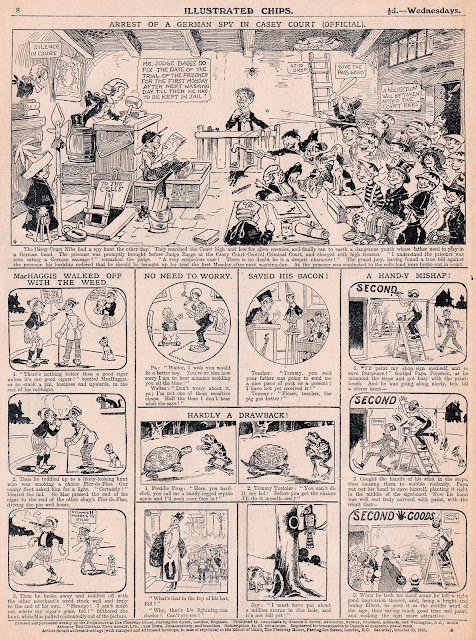 The creators of these strips (and sadly all the original readers) are all long since gone now, but artifacts such as this have survived the decades to give us an insight into those times.
Posted by Lew Stringer at 11:18

I don't think Halloween was a big thing even in the 1970s, was it ? I remember going to a Halloween party in the village hall when I was 12 (in 1978) and all we did was some bobbing for apples - I'm pretty sure we hadn't heard of Trick or Treat at that time.

Fun seeing an early Casey's court..
Love the cover and the way he is thrown out of the restaurant..

It is quite daunting to realise as you stated that the artists and readers (and most of the readers children) of the comic are no longer with us - no doubt someone will put up the first issue of WHAM! with the same line :(

You're right, Colin, although Halloween itself dates back centuries.

it's depressing enough when I talk about comics from childhood and the amount of creators that are dead (I was watching an 80s cartoon film the other day and knowing that half of the cast and crew are now dead.. many of them died fairly young though).

when people start talking about the tragic (though mostly there own fault) history of the UK kids comic 'Helter Skelter' as from a long past time, then it's time to feel really old and depressed though