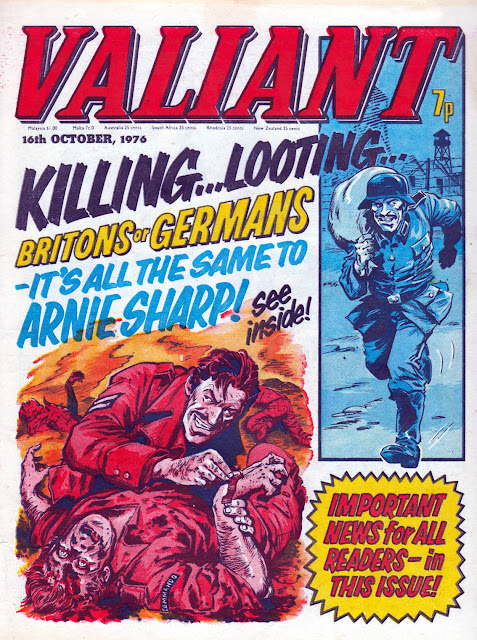 In the same week that Captain Britain No.1 hit the newsstands (see previous posting) the final edition of Valiant also appeared. The ominous "Important News for all readers" was in a cover flash, which never boded well for a comic.

Valiant had been published since 1962, and was one of Fleetway's bold new comics of the sixties. However, by the mid-1970s under IPC it was looking tired and dated, and was given a facelift by new editor John Wagner. Perhaps the changes came too late to re-ignite interest, so it was decided it would merge into the younger title Battle Picture Weekly. One might think that a merger with Action might have been more appropriate than with a war comic, but by that time Action was having serious problems of its own. This week in 1976 was also when the controversial comic was suspended so it was in no position to accommodate Valiant, even if that idea had been considered. (Interestingly, although the media spotlight was on Action, its companion comics Valiant and Battle had also upped the violent content somewhat to reflect the attitudes of the times. Examples being the cover above, with a bloodied corpse being robbed, and the strip below showing a finger being shot off!)

One of the newer strips that John Wagner had brought into Valiant was tough cop series One-Eyed Jack. This story would carry over into the merged comic, after changes set in place in this episode. Art by John Cooper... 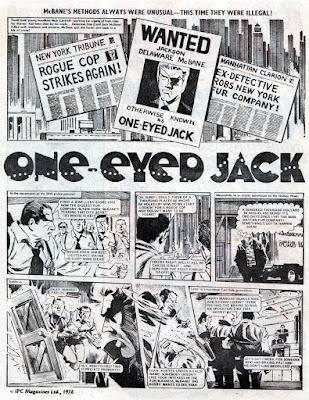 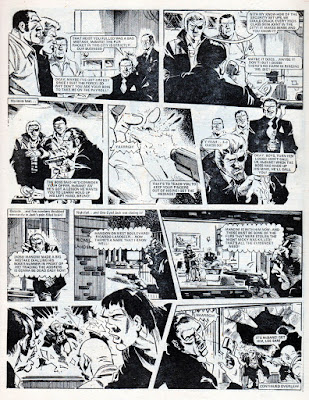 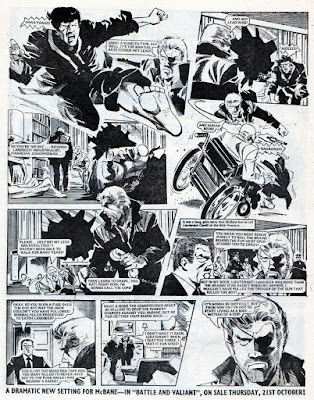 The announcement of the merger made it sound exciting, despite the fact that the readers were losing a comic. That huge logo wouldn't take up half a cover every week by the way. The 'Valiant' title would soon shrink to a smaller size, before later disappearing completely,  as was the norm with merged comics. 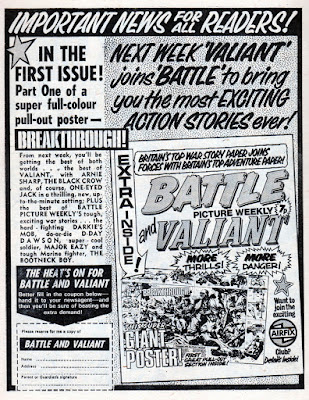 Another relatively recent story, Stryker, ended that week. Not a very memorable character but an opportunity to show art by Ian Kennedy can't be missed... 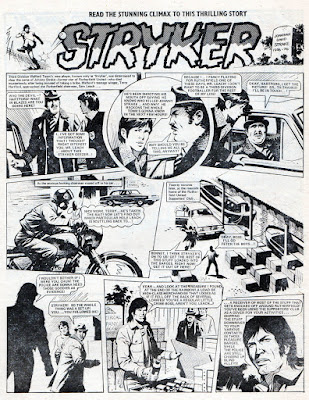 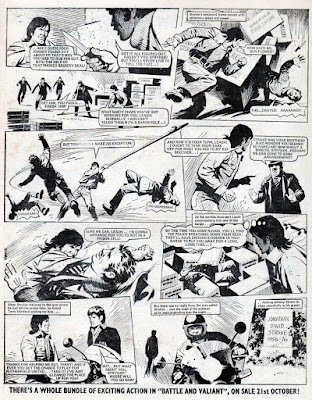 Billy Bunter had been one of the longest running humour strips in British comics (and previously as a prose series in The Magnet of course). The strip version started in Knockout No.1 in 1939 (see here) and joined Valiant when those comics merged in 1963. I'm not sure if this final 1976 episode is reprint or new, but it's good to see that all ends well for the fat owl. Art by Reg Parlett. 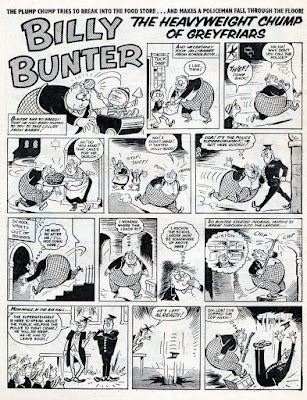 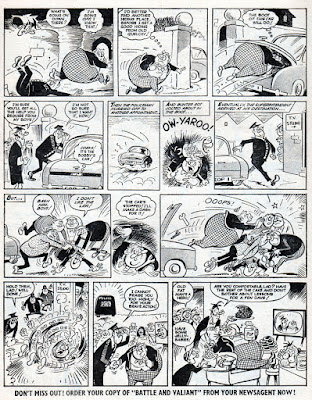 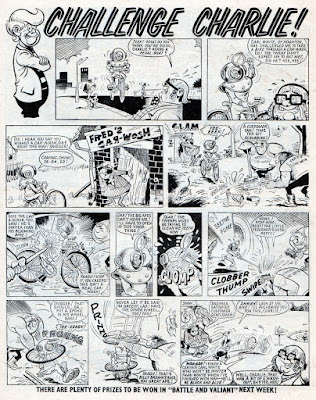 Captain Hurricane had been Valiant's lead strip since issue one, and this final episode ends with him announcing a return home. World War Two had lasted for 14 years for the mighty marine! The popular Adam Eterno strip, that had begun in Thunder in 1970, then moved to Lion and Thunder, before arriving in Valiant and Lion, also reached its end in this final Valiant. Eterno's journey through time and space was never properly concluded, so perhaps one day he still might return. (Let's hope he's one of the many characters that Rebellion now own.) Art by the Solano Lopez studio. 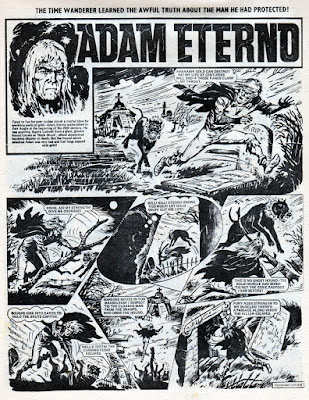 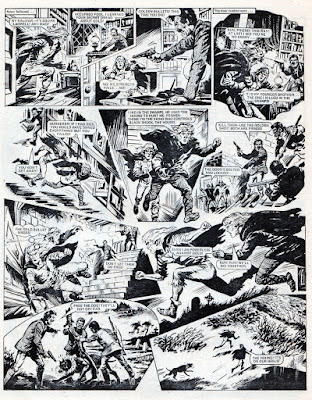 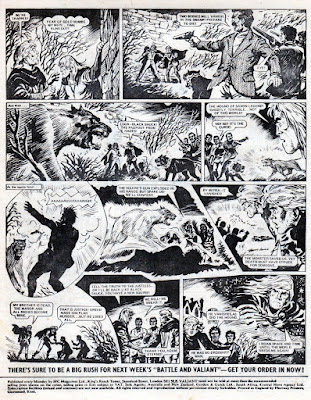 On the back page of this final issue; The Nutts. Again, a long-running strip, and possibly this one is a reprint. Art by Angel Nadal. 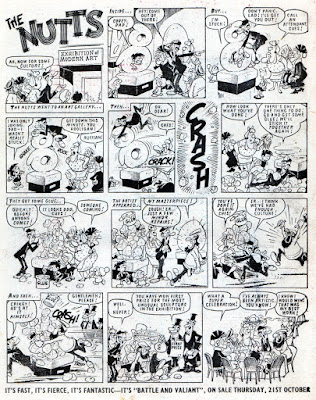 So that was it for Valiant's impressive 14 year run. It gave way for the new breed of adventure comics but it's still very fondly remembered today.
Posted by Lew Stringer at 15:49

I have a couple of 60s Valiants and a handful from 1973 as well as one annual and the Valiant Book of TV's Sexton Blake. It's a pity two strips I most associate with that paper, The Steel Claw and Kelly's Eye weren't there for the last issue. I also enjoyed the Janus Stark series.

Always good to see a billy bunter strip.
I recommend The Big fat bunter book which is a history of bunter comic strips. Talking of the Magnet there was a great reprint issue of over 150 hardback volumes back in the late 1970s I don't think we'll ever see the likes of that again!

Mike Higgs designed / compiled that Bunter book and I supplied some original 1950s art for it. A very nice book indeed.

To me, Valiant alongside Lion were the last of the IPC/Fleetest giant classics. By the time I got interested in adventure/action comics, they had long gone so could only get involved with DCT's equivalents - Hotspur and Victor. Good comics but definitely coming in second in my book.

Yeah, Thomson's adventure comics never appealed to me much either. That said, a year or two ago I bought complete runs of Crunch and Buddy that look interesting. Now all I need is the time to read them.