It was a hectic week 40 years ago for the UK comics industry. The launch of Captain Britain No.1, the end of Valiant, the suspension of Action... and the release of Krazy No.1. To young kids of 1976 it must have felt like their comics world was being turned inside out.

Being an older kid at the time (17), I only bought the first issue of Krazy, but it looks like it was an entertaining enough comic that I'm sure delighted a lot of children. Apparently it only ran for 79 weeks before merging into Whizzer and Chips so it didn't quite grab enough readers for some reason. At least it outlasted the 22 weeks that some of its companion comics of the time endured.

As its title implies, Krazy was intended to be a wilder, offbeat comic than its sister titles. Its contents were a bit more informal and included some one-off pages as well as regular strips. It was hosted by 'The Krazy Gang', who derived their name from The Crazy Gang of old British music halls (but otherwise had no connection to the act). The Krazy Gang, which included Cheeky (who would later have his own comic) not only starred in their own strip but also served to introduce the other strips. The idea being that all the characters were residents of 'Krazy Town' (using the concept of a shared universe like The Beano).


Krazy had some traditional elements too. For example, strips such as Handy Andy and Fit Fred and Sick Sid could just as easily fit into any other IPC humour comic.


One strip that the editors of Krazy clearly expected to be popular was 12 1/2p Buytonic Boy, superbly drawn by Robert Nixon, given the luxury of two full colour pages... 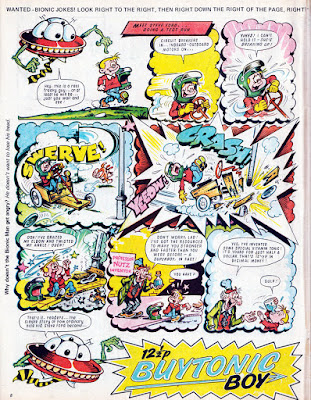 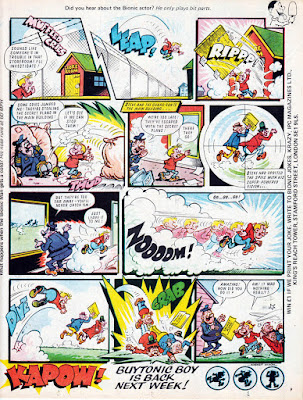 The Buytonic Boy's name was a nod to the 'Bionic' craze of the time from the success of The Six Million Dollar Man and Bionic Woman TV series. Those two characters were even parodied in a Krazy one-off strip. (Drawn by Bill Titcombe I think.) 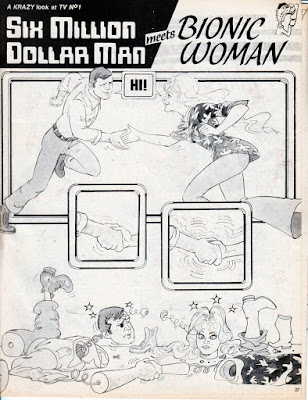 The centrespread of this first issue of Krazy featured a great bird's eye view of Krazy Town... 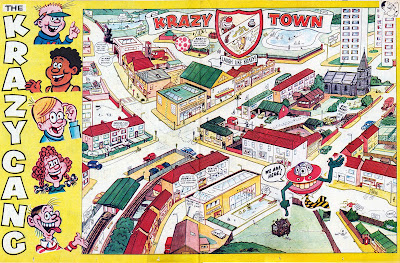 Overall, Krazy was perhaps more reserved and traditional than its title had suggested, but it still has people who remember it with fondness today. One fantastic gimmick it had was the Krazy Comic Disguise on the back page. Flip over the first issue and it resembled a school exercise book of the period, complete with inky fingerprints and in stains. I wonder if it actually did fool and teachers? 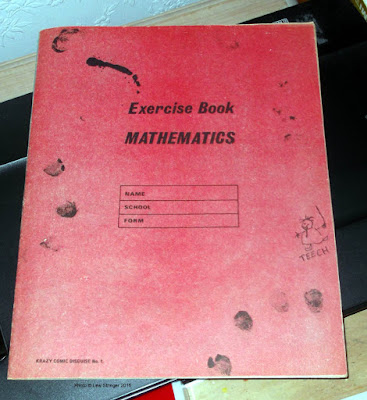 Below: The advert for Krazy No.1 that appeared in Battle Picture Weekly the previous week. Although Monday 11th October was the official on-sale date it did actually reach the shops on Saturday 9th October. 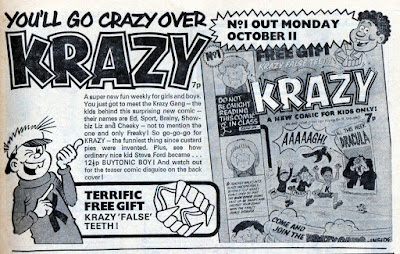 All of Krazy's covers where then reused for the covers of Funny Fortnightly, but with small edits to change any reference to the actual title of the comic. When writing my own blog post about FF last year on The Oink! Blog I remember being disappointed to find out they were all from Krazy and not originals, but now with hindsight it makes perfect sense and they were brilliantly inventive for the time. Just shows how inventive they were actually, to be used again as-is (almost) thirteen years later for a completely different title!

I was a huge fan of Krazy at the time. One of the things I remembered particularly was the quality of the paper and that it had more colour than the other Fleetway comics (however less pages - 24 instead of 32), so it was more like the Mickey Mouse/Donald and Mickey comic they also offered at the time. A big contrast with Buster, which although had terrific content, was only colour on the front page.

nice look at it. I've heard of the comic but not really seen much of it. Does seam pretty standard stuff so that probably didn't help it.

You’ve done me a favour, bringing home why it was so oddly jarring to see Fit Fred, Handy Andy and other mainstream strips amongst Krazy’s zanier offerings. I never read Krazy originally, being just under three when started, but have read each issue since and couldn’t quite twig why it was a kind of game of two halves. It’s like finally having a cloud lifted! Graham-Kibble White pointed out Krazy started a ‘year’ – in fact a month-odd – after DC Thomson’s recently-discussed Cracker ended. His inference is that Krazy hit the wacky spot in the way that Cracker, and most of DCT’s other offbeat titles ... didn’t. I have to agree: Plug looks woefully dated now, whereas its rival Cheeky is, mostly, as fresh as a daisy (we’ll draw a line under Paddywack.

I'm not sure about later issues, Matthew, but issue 1 definitely has 32 pages.

Oh - thanks Lew, perhaps I misremembered that one - all my Krazy issues are in my parents attic so I can't check right now. I remember early Whoopee! had 36 pages instead of the usual 32, but perhaps I got that one wrong too! :)

If anyone is interested, there is the Blog 'Cheeky Weekly' looking at the Cheeky spin-off comic:
http://cheekyweekly.blogspot.co.uk

I was 10 going on 11 when Krazy hit the shelves - so probably the perfect demographic for the title. I couldn't wait for each issue to arrive at the local newsagent. It was a real groundbreaker for me, slightly more American feel (like a polite Mad mag'), new artists and one off skits and sketches..

Although I never felt the bigger set pieces Buytonic Boy, Birdman and Chicken were as good the publishers thought they were