FLINTLOCK No.2 is coming! 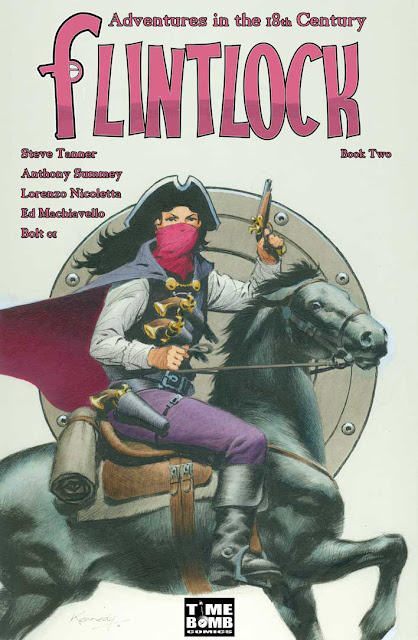 The format of Book Two follows the first: a 48 page prestige format comic featuring three stories set in the shared-timeline 100 year history that is the series backdrop. The lead characters introduced in Book One – highway robber Lady Flintlock, Shanti the Pirate Queen and mechanical marvel The Clockwork Cavalier – also make a return appearance, and Tanner hints that the Book Two stories sow some seeds for stories to come.

“The individual Flintlock characters may never meet but what they get up to in their own stories will have repercussions on each other through the century the series takes place in,” he explains.

What else makes Flintlock Book Two stand out is the cover artist – none other than Ian Kennedy, the veteran comics artist whose unique style has featured in many fondly remembered comics over the last 60 years. Kennedy still provides regular covers for the DC Thomson Commando series, and has recently produced some new cover paintings for 2000AD.  Rarely moving outside of long-established British publishing houses (aside from some artwork produced for the Dan Dare professional fanzine Spaceship Away) Kennedy’s rendition of Lady Flintlock is an unexpected but welcome surprise on the cover of a comic from a small, indie production.

“The comics that Ian is remembered for are the comics that inspired Flintlock – classic weekly adventure stories that unfortunately are no longer with us. So to have Ian’s instantly recognisable artwork on the book is just wonderful!” Tanner enthuses.

Flintlock Book Two is currently running as a pre-order campaign on Kickstarter, has already surpassed its modest £500 target and is now hoping to unlock some extra reward stretch goals for the project backers.  There’s also an opportunity to get a limited print of the cover artwork, personally signed and numbered by Ian Kennedy, as part of the campaign.

The Kickstarter campaign is running until 31st October and can be found at:

For more information on Flintlock see the series Facebook page at:

What would you say the age range on this is Lew?

Would my 10 year old be able to read it - basically need to know if there's any sex/swearing?

There's a little bit of swearing in issue 1 but no extreme words. No sex, although the word "whore" is used. Some scenes of violence including a decapitation.

OK thanks for the info Lew, I've gone ahead and backed anyway as I'll enjoy it, I'll make sure to read it first before passing it on.

So no, keep it the hell away from kids!

That's entirely up to the parents, not for us to decide, Channe.