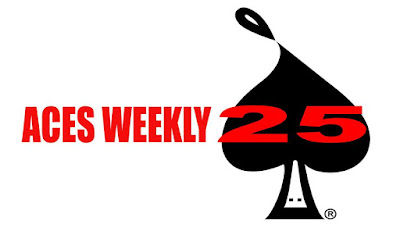 Today, the digital anthology comic Aces Weekly launches the first issue in its 25th volume. (Each volume comprises seven weekly issues.) A few critics may still scorn the idea of digital comics but publisher David Lloyd has proved that Aces Weekly can endure.

Having contributed several new Combat Colin strips to the comic myself I can vouch that it's a joy to work on. David gives his contributors free reign on their strips and we all receive an equal share of the profits, fairly divided, based on the number of pages we contribute. Plus, of course, we own the full rights to our strips. 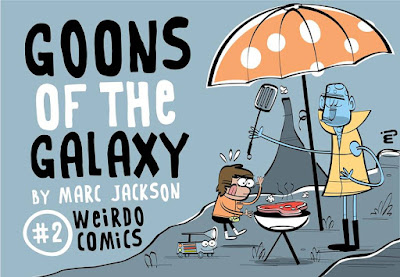 
"Friends,
Tomorrow we begin Volume 25 of Aces Weekly! We've reached a quarter-century of graphic-novel-sized anthologies of extraordinary comics storytelling from an amazing variety of Aces from across the globe. We've been blessed with great subscribers and great contributors to get to this milestone of achievement, and, to mark it, I want to pay tribute to those subscribers and their commitment to us, and also express thanks to all the great Aces who are our contributors, whose work has made us what we are : the greatest original digital comics art magazine in the world! Here's a roll-call of some of our stars, with more names to note to come - and remember : their work is always available, never out of print, never in a back-issue box, and is ready to read at the touch of a button from www.acesweekly.co.uk/shop... John McCrea, Phil Hester, Jeff Anderson, Jeffrey Vaughn, Mark Wheatley, Steve Marchant, Marc Hempel, Alain Mauricet, Alexandre Tefenkgi, Yishan Li, Carl Critchlow, David Leach, David Hitchcock, Phil Elliott, Lew Stringer, Roger Langridge, Herb Trimpe, Esteban Hernández, Mychailo Kazybrid, Bambos Georgiou, Ferg Handley, Kathryn Layno, James Hudnall, Val Mayerik, Henry Flint, Ben Dickson, Réza Benhadj, Paul Maybury, Antonio Bifulco, Seth David Tobocman, Stephen Baskerville, Rory Walker, Jimmy Broxton, David Hine, Shaky Kane, Batton Lash, Dan Christensen,Jasper Bark, Alfa Robbi, Martin Cater, Chris Geary, Laura Scarpa, Manoel Magalhães, Osmarco Valladão, Rachael Smith, Carlos Pascoa, Gary Whitlock, and Junior Tomlin...
And tomorrow we show you the future... Volume 25. Join us at Aces Weekly." 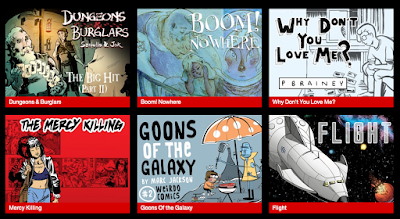 The new line up of strips that begin in Aces Weekly Vol.25 No.1 are:

DUNGEONS AND BURGLARS: The Big Hit (Part II)
In the back-story of a legendary treasure, an heroic figure stands revealed as a betrayer! But what next..?
Art : Jok. Script : Santullo.

BOOM! NOWHERE.
In a drowned world, some things must be brought to the surface...
Script: Katie Cunningham. Art : Heather Fisher.

WHY DON'T YOU LOVE ME?
The continuing story of family life through a blackly comedic glass…
by Paul Rainey.

GOONS OF THE GALAXY
Blue milk blues is looking like a permanent condition..!
by Marc Jackson.

FLIGHT
Waiting in orbit, a huge spaceship is called into the service of humanity, once more...
Script : Jeff Vaughn. Art : Brendon and Brian Fraim.

Remember, Aces Weekly is only £6.99 for each seven issue volume, and all 25 volumes are always available. No worries about them going out of print, and no searching for back issues. Support UK comics and subscribe today!
http://www.acesweekly.co.uk
Posted by Lew Stringer at 21:58