New COMMANDO comics out this week 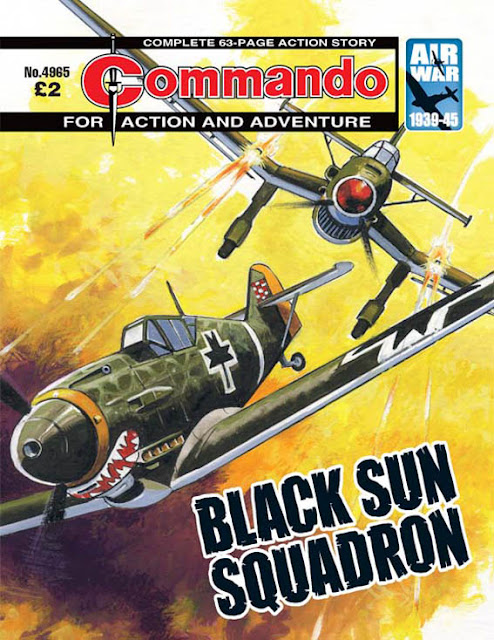 Thanks as always to D.C. Thomson for supplying me with cover images and info...

Stranded in Nazi-occupied France, his regiment gunned down, Corporal Bruce Newell is a hunted man. But when he comes face to face with ruthless S.S. Major Erich Benzler – the man who slaughtered Bruce’s friends in the chaos of Dunkirk – Bruce’s mission is no longer one of escape, but of revenge.
As Bruce closes in on his target, he realises his task is a heavy one… is the death of one despotic Nazi worth the lives of hundreds of innocent civilians?
Bruce is truly caught in a…DEADLY DILEMMA!

Commando – 4964 – Yankee Buddy
When one lone Commando was transferred to the U.S Marines, every eye was on him from the moment they hit the Japanese-held beaches. How was his shooting? How was his nerve? Did he know this stuff? Every bullet-lashed yard was a testing ground for Commando Jacky Dean, who carried the proud reputation of all the Commandos on one broad pair of shoulders.
Jacky might never have passed that test, if he hadn’t found a real buddy amongst the Yanks.

Introduction -
Who’s the toughest – U.S Marines or British Commandos?
That’s the question on everyone’s lips except our reluctant Commando, Jacky Dean. In a story by legendary Eric Hebden, Jacky is a liar, a deserter and even possibly… a murderer. Hebden pushes the boundaries of what we would consider a Commando hero while J. Fuente’s impeccable interior art cleverly depicts Jacky as a loveable rogue.
Set on the backdrop of the war in the Pacific, the plot rests on Jacky’s chaotic nature and unwillingness to fight ultimately being overcome through his friendship with his ‘Yankee Buddy’, Marine Andy Devlin. Enjoy!

Commando - 4965 – Black Sun Squadron
Squadron Leader Marko Vida was a talented and fiercely fascist pilot. Backed by the Nazis, Vida and his Black Sun Squadron dominated the skies over Croatia…
…Or so they thought. A Partisan Air Force made up of old, stolen fighters and led by Flight Officer Zlatan Pavic and Flying Officer Petar Milic would not hand over Croatia so easily.
With their planes outclassed and outgunned, things were fraught for the Partisan Air Force. They dared to fight back against the might of the… BLACK SUN SQUADRON!

Commando - 4966 – The Invaders
More than two thousand years before, the Roman legions had marched into North Africa as invaders, as conquerors. In the twentieth century the soldiers of Italy returned again, and among them was one man who thought himself the equal of the ancient emperors. But he was wrong, for the ancient Romans got the better of him – in their own sinister way…

Introduction -
From prolific Commando writer C.G. Walker comes this classic tale of obsession, cruelty and survival, set against the stark backdrops of a brutal desert in North Africa and a fierce volcano in Italy. The drama of the story is matched perfectly in the art by fantastic interior artist Llops, who brings the action to life.
The story plays on the tension between past and present, and veteran cover artist Ian Kennedy rises to the challenge with an eye-catching and striking cover, despite his professed dislike of painting horses!