New book from Pat Mills and Kevin O'Neill for 2017 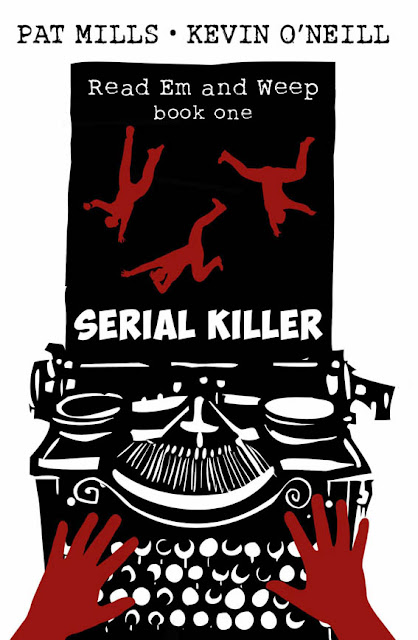 Scheduled for early next year is Serial Killer, book one of a series of novels called Read 'Em and Weep by Pat Mills and Kevin O'Neill. The book that "deals, in a fictional way, with the origins of the comics revolution" is planned to be launched at the 40th Anniversary celebration of 2000AD that takes place in February 2017.

Pat Mills has just revealed the cover of the book on his Millsverse website (where the above image is taken from) and on social media. You'll find more information about it there.

Pat's website is a wonderfully designed place full of good stuff, including this guest blog post by Kev O'Neill on IPC's attitudes to credits:
http://www.millsverse.com/kevin-oneill-on-vexed-question-of-creator-credits/

I'm pleased that the creators got credit (eventually) in 2000AD but i've come to realise after many years that IPC did actually have a point. The artists and writers were poached by the American publishers pretty soon after their names started appearing on the strips - no wonder the management wanted to keep things under wraps!

I suspect they'd have worked for American comics anyway, as most of them always had a passion for US comics. Plus they were attending conventions where US editors were guests. The credits were just a part of a more open and interactive time in comics.