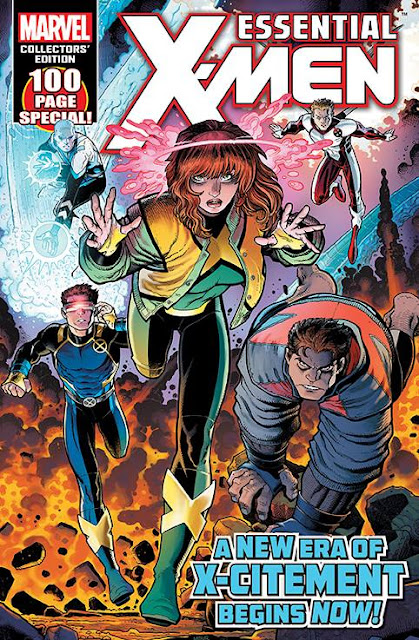 Essential X-Men is the latest Marvel Collectors' Edition to begin a new volume from No.1. Published by Panini UK, the first issue of the new series is on sale now, as a 100 page bumper edition, going to its usual 76 page format with issue 2.

The relaunch also switches to the squarebound format that's gradually being introduced across the whole line, and a 51p price rise to £4.50. We're now living in an age where prices like that, and higher, are the norm for UK comics/mags. Sad, but inevitable, and out of the publisher's control. (The cheapest British comics are now Beano and 2000AD at £2.75 each.)

Anyway, the new Essential X-Men No.1 is a perfect jumping-on point for new or lapsed readers, so let's see what's in this issue...

Did Brexit cause the price rise? Bloody Brexit!

They blamed Brexit for last year's price rise, so it wouldn't surprise me. There are still people who don't yet realise (or don't care) what a huge mistake Brexit will be.

Who knows. Changing the format and raising the price at the same time might generate a higher margin. Or Licencing from Marvel might have become more expensive. Back in 1973 Avengers weekly was launched with a glossy cover for an extra penny compared to MWOM & SMCW. Maybe that was more profitable (ie they could have sold it for 5&1/2p instead of 6p).