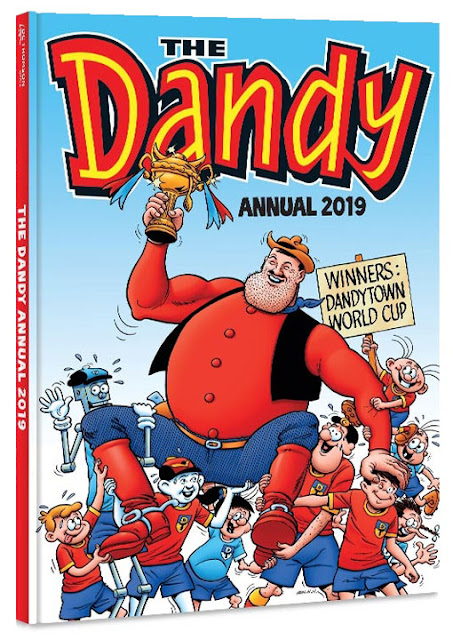 D.C. Thomson have revealed the cover of The Dandy Annual 2019, set to go on sale this August. Once again it will have 112 pages of all-new strips featuring the top Dandy stars from the comic's long history such as Desperate Dan, Brassneck, and Keyhole Kate. The cover art is by Ken Harrison.

The book will of course be available to buy on its own, but at the moment you can pre-order it with the Beano Annual 2019 as a discounted "Double Trouble Pack" from the D.C. Thomson shop:
https://www.dcthomsonshop.co.uk/our-brands/the-beano/double-trouble-pack-2019.html

nice cover.. but, I think he has been silver for a while, but Brassneck just doesn't look right silver.. back in Black and white, being plain white was fine, but silver.. mm still a good cover through.

Yes, he's supposed to be the colour of brass (and presumably made of brass), hence the pun in his name, so I've no idea why they've coloured him grey.

That's odd to see Cuddles & Dimples switching back to their former design. Still it's a great drawing overall, as usual with Ken Harrison.

It doesn't necessarily mean that Cuddles and Dimples will be that design inside though. My Keyhole Kate looks a bit different to Ken's version, for example.

what strips do you have in this years annual..?

Hey, are you working on the Dandy annual 2020 now?

Only at the scripts stage at the moment. The deadline for my first script for the 2020 book is next week.

Interesting that The Dandy's logo is now the same as the summer special's. I wonder why - not that it really matters.

I think it comes down to keeping a consistent brand between the two publications, Sid. I used to enjoy the days when each special and annual had its own unique logo every year but these days it's all about the brand.

Oddly enough, although I didn't like that logo when it was on the weekly in the 1980s I think it works really well for the special and book.

I understand that, Lew and certainly makes sense. I just found it curious on the choice since the older logo had been adopted by everything except the specials.

But as I said though, I'm just happy that the annuals and specials are still coming.

Aesthetically, I think the red and blue of the cover is a bit excessive, and really needed a splash of Brassneck's true yellow colour to help him him stand out against the white background and amidst all those limbs.
I suppose it's far too late in the day for him to be re-coloured... and have a repeat of the wrong-coloured Rupert Annual cover situation!

(I'm not sure if the message I tried to post a moment ago without being logged in, went through. If both have gone through, delete the first version because I think this one says what I want a bit more concisely!)

I have moderation switched on for comments, Kevin, to avoid trolls, so when I'm not online it takes a while for me to see and verify them I'm afraid.

Yes, the book is probably printed by now, so too late to change it. I think Brassneck's been coloured grey before though so perhaps that's the way he's going to be now. A shame, as it doesn't reflect the character's name, but there we are.