This week from Panini UK... 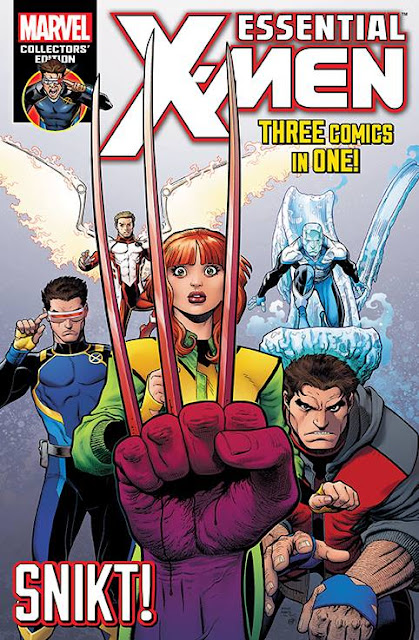 Info on the latest Marvel Collector's Editions, - 76 page comics from Panini UK in the shops from tomorrow...

ESSENTIAL X-MEN #2. On sale 31st May!
76 PAGES OF MUTANT MAYHEM! £4.50!
The Gold X-Men team clash with the new Brotherhood of Evil Mutants! By Marc Guggenheim and Ardian Syaf!
The Blue X-Men team encounter a mutant from another universe: the son of Wolverine!!! By Cullen Bunn and Julian Lopez!
Featuring material first printed in X-Men: Gold #2-3 and X-Men: Blue #4-5. MIGHTY WORLD OF MARVEL #3. On sale 31st May!
FREE MARVEL TRADING CARDS! 76 PAGES OF MARVEL UNIVERSE ADVENTURE! £4.50!
The Silver Surfer and Dawn race through the cosmos, heading for Earth – but Warrior Zero stands in their way! By Dan Slott and Michael Allred!
The Black Panther defends Wakanda against Klaw’s army! By Reginald Hudlin and John Romita Jr!
The Champions struggle to clear their name as the world turns on them! By Mark Waid and Humberto Ramos!
Doctor Strange battles an extra-dimensional menace! A 1960s Marvel classic by Steve Ditko and Stan Lee!
Featuring material first printed in Silver Surfer #11, Black Panther #5, Champions #8 and Strange Tales #120.

How is Essential X-Men three comics in one, as stated on the cover? It should be either four or two, not three, as it contains two issues of Gold and two of Blue.

It features three full comics and part of another (with the rest appearing next issue). A blurb saying "Three and a bit comics in one" wouldn't have the same impact.

With each reprinted issue having 20 pages, they often split a fourth issue across two issues to make up each issue's 76 pages. Or in the case of MWOM they use a short 1960s Dr.Strange story as back up.