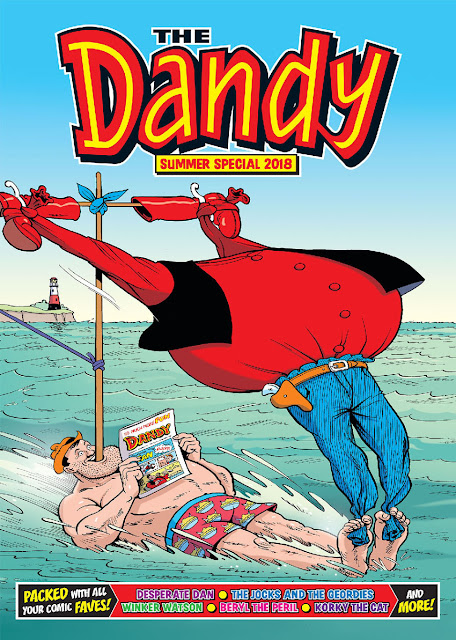 Here's the cover to this year's Dandy Summer Special, as revealed on the D.C. Thomson website this week. It'll be published on June 13th but you can pre-order it from the publishers themselves:
https://www.dcthomsonshop.co.uk/our-brands/dandy/dandy-summer-special-2018.html

I understand the contents will be entirely all-reprint again, as they have been for the last few years, but it'll be interesting to see what selection of stories have been chosen.

The cover, by Ken Harrison, is brand new, and in the fine tradition of Summer Specials of old.

The Beano Summer Special is already out, and contains all-new content. It can also be ordered from the publisher.

I'll be getting it, but hope the production values are better than last year's.

That looked like they'd set the work experience kid up with a bundle of old comics and a scanner and left 'em to it.

What didn't you like about the production of last year's special, Kal?

Lack of effort. It was like someone just bunged a few comics on a scanner, imported the resulting images into whatever publishing software they use and job's a good 'un. I seem to recall that at least one page hadn't been completely flat when they scanned it, but would have to find the bugger to check.

By way of comparison, the annual Beano & Dandy archive books seem to be produced with the aim of making a quality product. Last year's special, to me at least, seemed more a case of, "Ach, that'll do."

Personally I prefer to see old strips scanned from the comics, rather than remastered (which often knocks out finer detail). I didn't think the special was too bad. Some have been worse, with a sort of faintness to the scans.

Personally I found the quality of previous specials okay. Definitely looking forward to the new one which I will be getting.